Keywords and ratings work together to get your app to rank in the App Store. Sounds simple, but I'm continuing to see apps make the same simple mistakes again and again. Why?

This week we're looking at a fairly simple keyword with a popularity score that isn't super high, yet the top results get hundreds of thousands of downloads every month. Aaand, the top results all make avoidable mistakes. 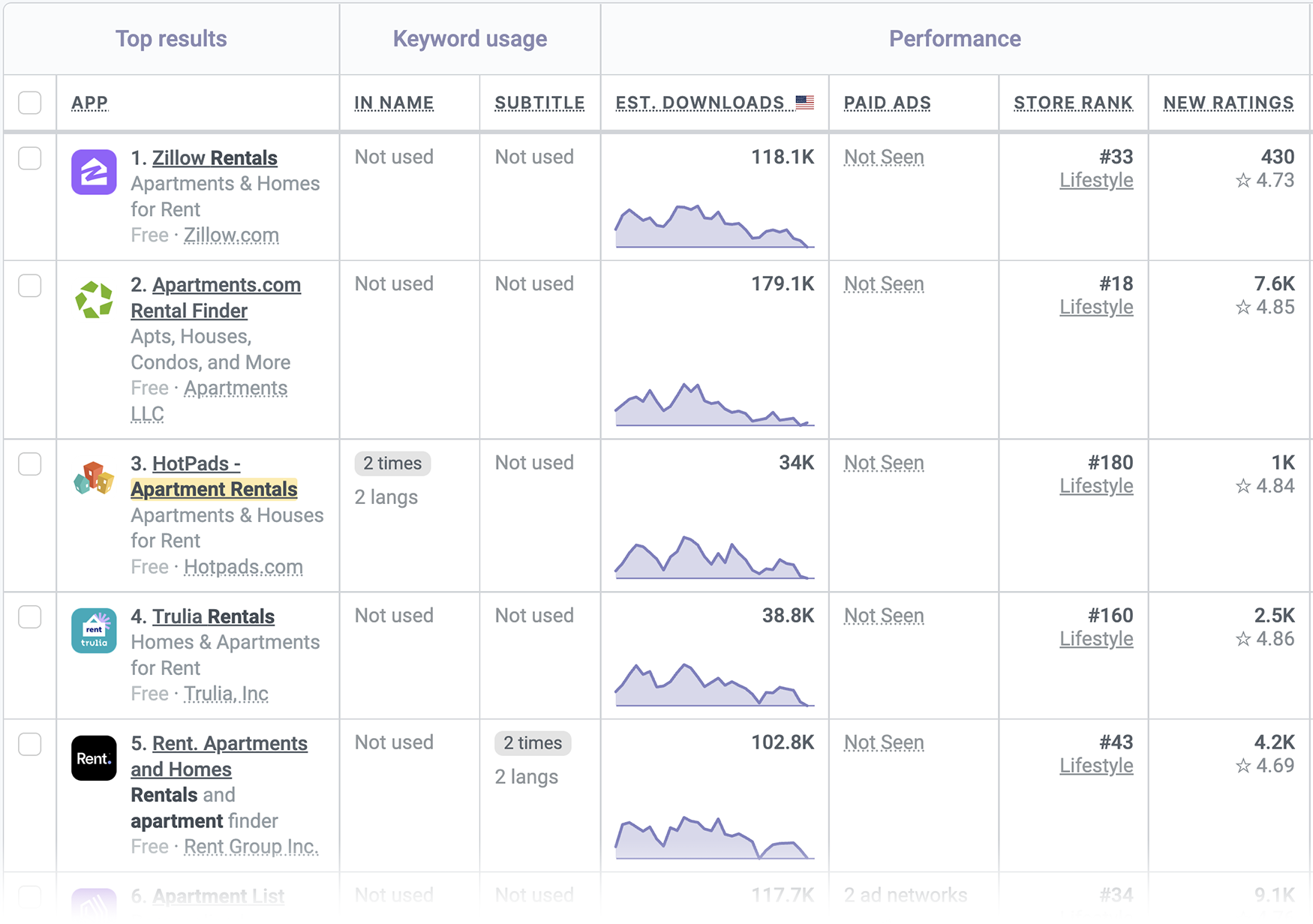 In first place we have Zillow, which earns this top spot not by having the most new ratings, but rather by doing things right. For starters, there's no repetition. Basic, yes. But as you'll see below, some apps didn't get the memo. In addition to no repetition, Zillow also keeps its name very focused, and together those two combine and give the algorithm exactly what it needs to pick its top choice.

Next up is Apartments.com, which you'd expect to rank better than Zillow because it uses both words in its name and has about 20x the number of new ratings. But... Apartments.com != Apartments, as far as the algorithm can tell, so while it does understand it, it doesn't consider it to be a real keyword and isn't awarding Apartments.com a more appropriate rank.

FYI - If you read my Advanced ASO Secrets list, this is an example of what I meant in the bonus section.

In third place, we have HotPads, which focuses and uses the full keyword in the name and gets a decent number of new ratings. More than Zillow, so you'd expect it to rank first. But!

It commits the sin of duplication, using "apartments" in its name and subtitle.

When the algorithm sees repetition like that, it "ignores" all but the last instance of the keyword, and since the subtitle is worth less than the name, the keyword isn't as strong.

In fourth place we Trulia, which copied Zillow almost perfectly. The only difference is that it flipped "apartments" and "homes" in the subtitle. A clever approach, considering Zillow is dominating. But... copying like that usually means the team behind the app didn't necessarily understand why this works and instead just copied it.

With enough ratings and a fairly decent strategy, why isn't Trulia ranking any higher? I suspect it's because of a bad keyword list.

The point I was trying to make before is that copying can only take you so far, and only works on what you can see... The keyword list isn't visible, and I believe has the word "apartment" in it somewhere early on.

The keyword list has become very important, so using it incorrectly is bad for ranks. The kind even lots of ratings can't fix.

And last on our list is a serious offender with almost the most to lose. Rent clocks in the second highest number of new ratings of the bunch, and converts downloads to ratings pretty well.

It duplicates and reverses keywords. Each on their own is bad, and together they're worse. There's not much else to say about this one.

The App Store's algorithm may seem like a complex monster, but really it's just an engine with a bunch of rules. If you know the rules and use the data, you have a chance at ranking well.