#71 - Dropbox is Using ASO And There's Nothing Wrong With That

John Gruber recently called Dropbox out for using keywords in the app's name to get more visibility (aka. ASO), which he called "depressing" and some people online nodded their heads in agreement.

I understand why he'd say that, but don't agree with his reasoning at all. Not because I talk about ASO all the time, but rather because what Dropbox did makes sense.

Indicating what the app does in its name is how you teach people who may not recognize the brand name about its benefits. That's not keyword stuffing, that's just business.

The keyword in question is photo storage, which Dropbox took out of the app's name a few days ago. Why did they add it in the first place? To beat Google!

Let's look at this keyword and see what's going on right now. 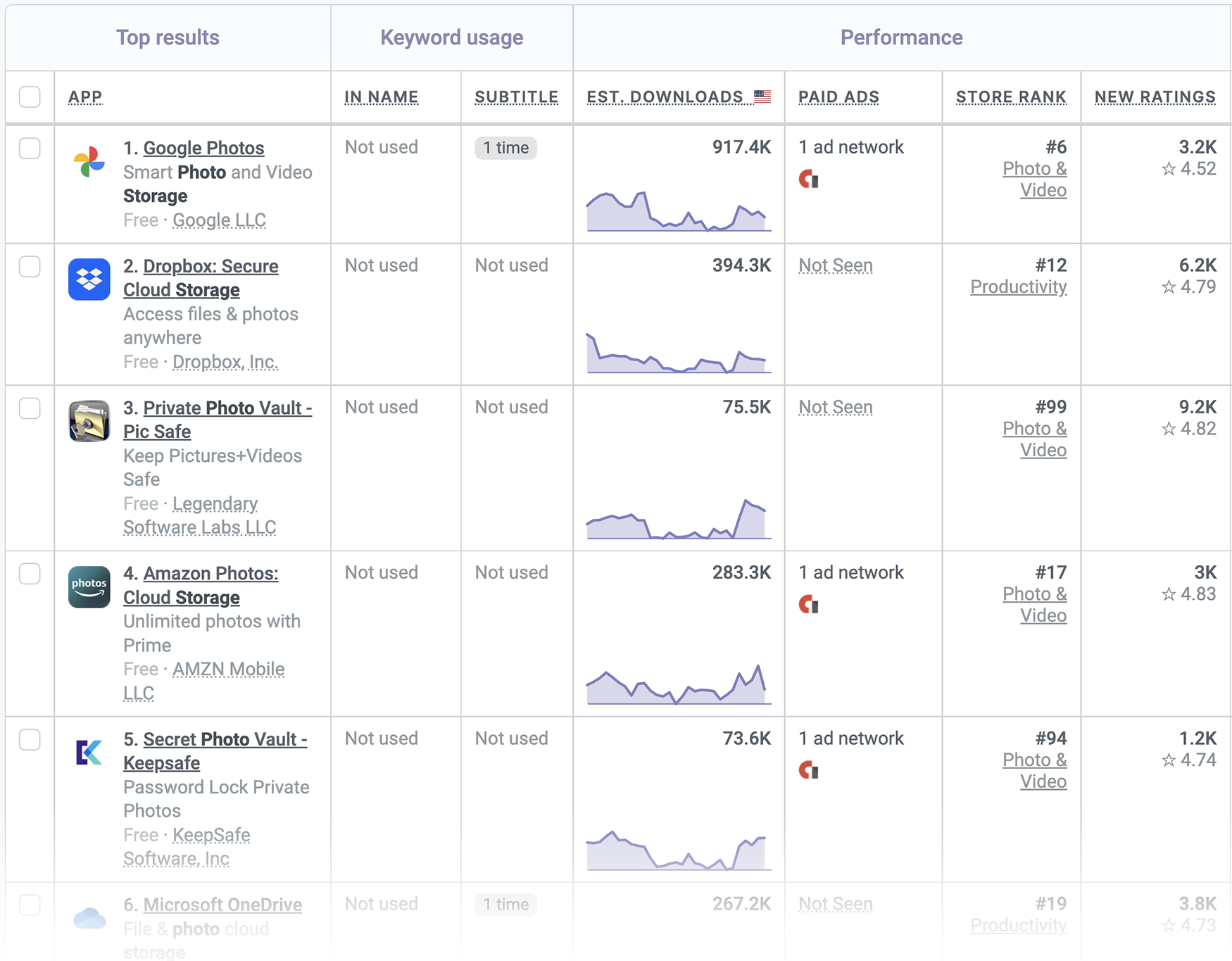 In first place we have Google Photos, which isn't getting the most new ratings of the top 5, but is the only app to somewhat target this keyword. It has both parts of the keyword in its subtitle, which isn't super strong, but... no other app targets the keyword in the name, which is why Google wins here.

That's also why Dropbox wanted it...

Below it, we have Dropbox, which no longer has the keyword in the name. It gets more new ratings than Google but omits "photos" from its visible metadata. Thanks, John?

One interesting thing to note here is that Dropbox gets about a third of Google Photos but double the ratings.

In third place we have Pic Safe, which has the most new ratings of the bunch. Three times what Google Photos gets in a month. It doesn't include the word "photos" anywhere in its name or subtitle, which makes it hard for the algorithm to reward all those ratings with a higher rank.

Moving on down, Amazon Photos gets the fourth spot by copying Dropbox and Google, but then messing it right up. Let's look at the good first - both words are in the name and the app is getting a decent amount of new ratings. Not as many as Dropbox, but more than Google Photos.

But then it ruins everything by repeating "photos" at the end of its subtitle. That's really two bad things. I suspect the subtitle isn't as optimized as it could be either, but that's just a guess.

And the last one in the set is Keepsafe. It doesn't do anything special and is getting the fewest new ratings of this bunch, so placing it last isn't a hard decision for the algorithm. It also commits the sin of duplication, which isn't helping much.

They're Targeting the Wrong Keyword, Again...

When you look at the top five results you'll notice a pattern that might explain why most apps don't include the word "photos" in them, and the reason is a classic mistake I see too many developers make. Even these big companies.

It seems that most apps in the group are targeting "cloud storage" and not "photo storage". If I had to guess, I'd say that's a more popular search term than "photo storage" because it's more generic. Do you agree?

The takeaway - Don't trust your gut when it comes to search terms.

Keyword optimization, when done right, not only helps the algorithm but also your potential users. You won't always be able to write all the app's benefits in the name, which turns it into an opportunity to try different things and see which works best.

Combine this with my method for identifying opportunities (#9 in my advanced ASO tips guide), and you'll be on your way to more visibility.

App Store Optimization isn't a way to game the algorithm but rather a way to help it. And, the algorithm needs it because it can't just guess which apps are relevant and popular. Not without some help.

I invite those who think the App Store needs a new ranking algorithm to share how such a magical algorithm would work. When you start thinking about it you realize what we have now isn't bad. Sure, it can be improved, but Google has many years on Apple when it comes to search and Google Play is even easier to game.