Some search results make absolutely no sense. That's today's keyword, which came from a viewer on YouTube. But as always, search results come from an algorithm, and algorithms have to make sense.

It does, at least in this case, and it's because the algorithm is using a signal most don't think about and don't normally look at when analyzing.

"Math games" is a pretty popular and competitive keyword on the App Store. The downloads aren't crazy high, but considering the category here – educational games – that's par for the course. Keep this in mind because it's the key to these search results. 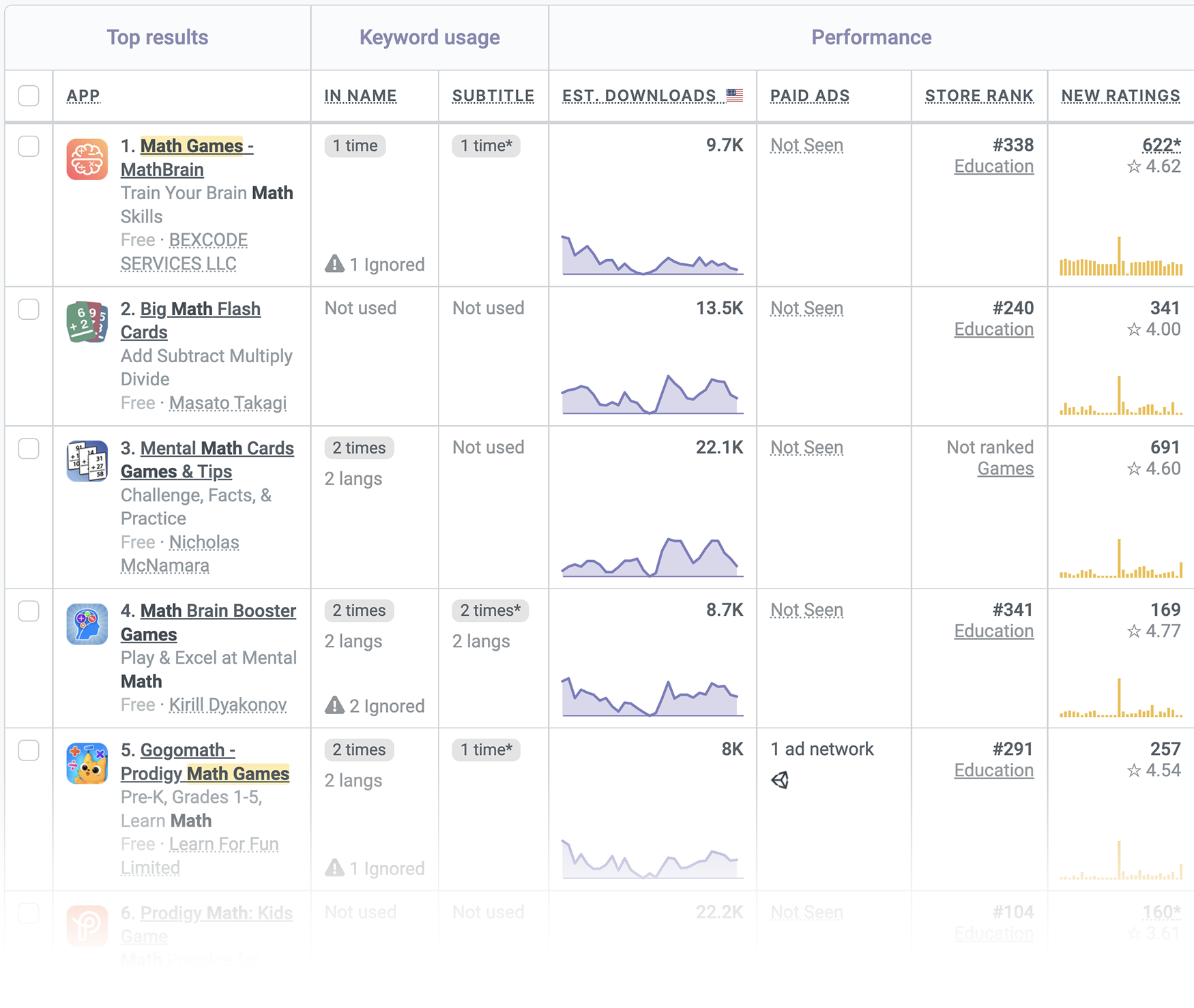 In first place we have an app that almost does a great job. MathBrain places the keyword, in its entirety and not reversed, right at the beginning of its name. It gets more ratings than its competitors even though it doesn't get as many downloads, and the cherry on top: it promotes its in-app purchase.

If you aren't doing these now, you really should. As soon as you're done reading this teardown, of course.

But... MathBrain commits the ultimate sin of ASO – duplication. Duplication is bad, and once you see it, you can't stop unseeing it, but for some reason, it's the most common ASO issue I see.

But even with its duplication, other apps are making other mistakes that lead the algorithm to choose MathBrain. That's lucky.

Right below it, we have Big Math Flash Cards, which isn't exactly a math game but has enough of what it takes to rank. It gets fewer ratings than the top result and uses half of the keyword (games) in its keyword list, and that's enough to get second place.

This is in part thanks to other apps not optimizing well.

In third place we have what looks like an algorithmic mistake. Mental Math gets more ratings than the top result, has both parts of the keyword in its name, not together, but both, and doesn't duplicate "math" in the subtitle like all other apps.

So why isn't it the top result?

I believe the reason has to do with the app's category.

I've noticed that for some keywords, the algorithm associates a category with the keyword and prefers apps from that category over apps from any other category.

This isn't something I see often, and every time I see it, games are involved. Usually, it's some other category that gets preference over games.

Picking a category shouldn't be a guess or a gut decision but rather one that's based on data. At least for apps that could be games. Or are.

Moving down we have Math Brain Booster Games, a mouthful for sure, but with a fifth of the ratings and very obvious duplication, it's exactly where it should be.

As a user, I prefer apps that have some brand name. It doesn't have to be recognizable or amazing, just exist. App names that are only keywords feel off. Are you the same?

And last for this set is Gogomath, which has a brand name! It also gets a decent amount of new ratings. But... duplication isn't helping it. At all.

It's also pushing the keyword to the end of a fairly long name. Combine that with the duplication, and also the duplication in the localization, and it's a tough one for the algorithm to rank. Which gives it a slightly lower rank than what it could probably achieve if it fixed those.

I took a quick look at our Apple Search Ads Intelligence (coming very soon) and noticed that of all of these, only Gogomath spends on ads. Remember, downloads don't impact organic search ranks though, so consider this a fun fact.

That's normally where I end, but I noticed something interesting a bit lower in the ranks that's worth looking at. Elevate is a pretty popular app that also offers math games, at least according to its subtitle.

it gets a whole lot of ratings. About 8 times what we've seen from the top apps, and has both "math" and games" in its visible metadata. Not together, but also not reversed.

Why is Elevate not winning this keyword? I'm pretty sure it's because it's not using either part of the keyword in the app's name, instead, focusing on "brain training", which I looked at in Keyword Teardown #37.

Where you place your keywords is important. I think I've said that before, once or twice.