Should you run an Apple Search Ads campaign to support your organic App Store Optimization campaign? Yes, and no, and definitely maybe.

In this keyword teardown we're going to look at one thing you must be aware of when spending money on ads if your goal is improving your ranks.

The photo and video editor space has been hot for quite some time because a lot of social media is about visuals.

App Store Optimization is about intent, so using the name of a thing people can post to in your editor is a great way to get downloads, and the popularity of this keyword is a good indication of that.

Because it's a hot niche, this keyword is also a good example of what happens when you use paid ads. 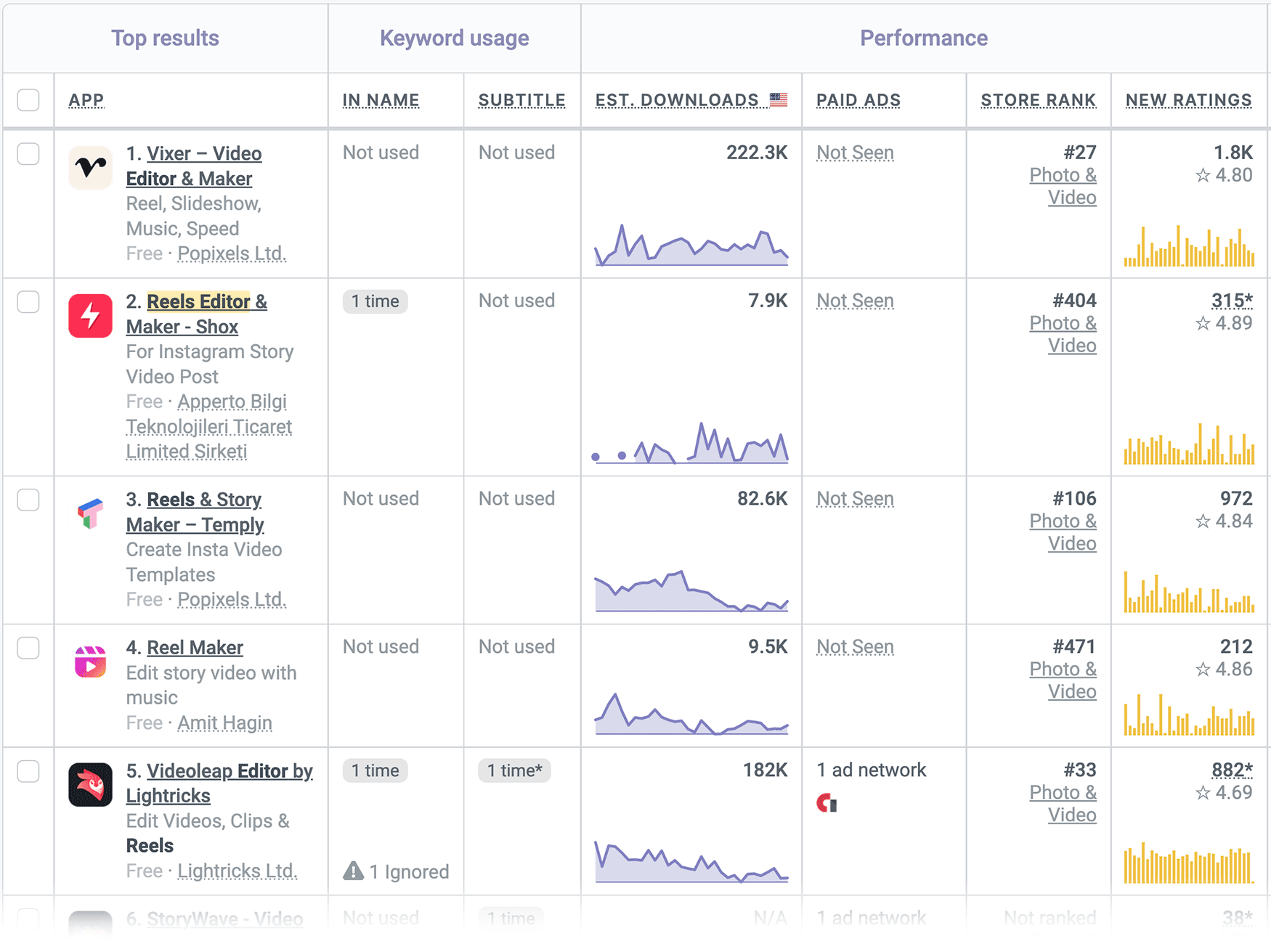 Vixer is the top result for two reasons. The first is obvious, it's got both words in its visible metadata. They're split between the name and subtitle, and are reversed, so it's not great. But... the second reason, the mountain of new ratings it's getting, is helping a ton. Not because it's a lot of ratings but rather because it's a lot more than the competition.

Vixer uses Apple Search Ads but only sparingly. Our ASA Intelligence (coming soon!) shows Vixer paid for 60 keywords over the last few months. This is going to be important later.

Right below it is Shox, which does everything better, but is so far apart on new ratings the algorithm can't help it as much. Proper keyword placement will get you very far, but if the competition is also using the keyword and has many more ratings, they'll be hard to beat.

The simple lesson here is that including the right keywords in your app's name and subtitle (and keyword list) is essential. You heard it here folks.

As far as Apple Search Ads go, our intelligence isn't showing any paid keywords for Shox.

Next up (or down, rather) is Temply, which makes a clear mistake of not including the word "editor" in its visible metadata. It's most likely in the keyword list, which when the algorithm sees and combined with the nearly thousand new ratings it got in the last 30 days, earns it the third spot.

By adding "editor" to its name (or subtitle, but preferably the name), Temply will instantly rise to the 2nd spot, and I'm pretty sure if the keyword is included properly it can become the top result.

Temply seems to be using Apple Search Ads just as much as Vixer, with about 50 paid keywords over the last few months.

Sliding down we have Reel Maker which feels refreshingly different. Not good, but different. It's got one half of the keyword as the first word in the name and that helps it even though it pushes the other half into the keyword list and doesn't get that many new ratings.

It also seems to be a bigger spender of Apple Search Ads. We saw it spend on more than 500 keywords over the last few months. About 10 times higher than its competitors. That's important, and I'll explain why in just a little bit.

And last one in this set is VideoLeap. Judging by the metadata alone, VideoLeap should be a bit higher. It uses both words in the visible metadata. Broken up and in reverse, but we already know that's not the end of the world. It also gets a decent number of new ratings when compared to some of the competitors. Not enough to bring it up to the top top, but enough to bring it into 3rd place.

When it comes to Apple Search Ads, VideoLeap is a big spender. We saw VideoLeap in nearly 3,000 paid keywords in the US. That's 60x the first two and 6x the last one.

The "Danger" of Paid Ads and ASO

Is there a correlation between organic search results and paid ads? Absolutely!

One of the signals search algorithms use to rank apps is the ratio of how many views an app gets in the store and how many of those turn into a download. Google is much better at this than Apple at this point, but Apple still does it.

When you rely only on organic discovery, the odds of someone looking for something else and finding your app isn't very high, so those who get to your app are more likely to find it suitable for them. This means they're likely to convert from a view to a download.

When you spend money on ads you're buying screen real estate that may not be relevant to your app. Some people don't pay attention when tapping around in the App Store and if your campaign is a bit too loose, you can easily get views from people who don't need your app and who are less likely to convert to a download.

That's bad because it makes the algorithm think your app is the problem and it could rank other apps higher.

Looking at the number of keywords, I suspect that's the case here. Can you think of 3,000 different ways to search for a video editor? I can, but at least 40% of them are only loosely relevant.

If you don't care about organic discovery and rely mainly on paid ads, this isn't an issue, but if the goal is for paid to feed organic, it could be.

It doesn't have to be this way! You control how loose your campaign is, meaning, you choose which keywords to pay for. So, make sure what you pay for is relevant.

By the way, some marketers speculate that spending on Apple Search Ads automatically pushes your app down organic results as a way for Apple to make more money from your app. I don't know for a fact that's not true, but... my explanation above makes a lot more sense.