#79 - Apple's Own Apps Are Ranked Where They Shouldn't

Apple's own apps used to own the top spot in search results for one keyword and one keyword only, but over the last few months, that seems to be changing and they seem to behave like regular apps.

What does that mean? And more importantly, how can you compete with them?

I find myself converting units a lot. It's easy to convert through Google but I wanted a more native option so I waltzed into the App Store and stumbled on an interesting keyword. One where Apple's own app is in the search results but not in 1st place + where the category matters.

I'm starting to see this more these days. 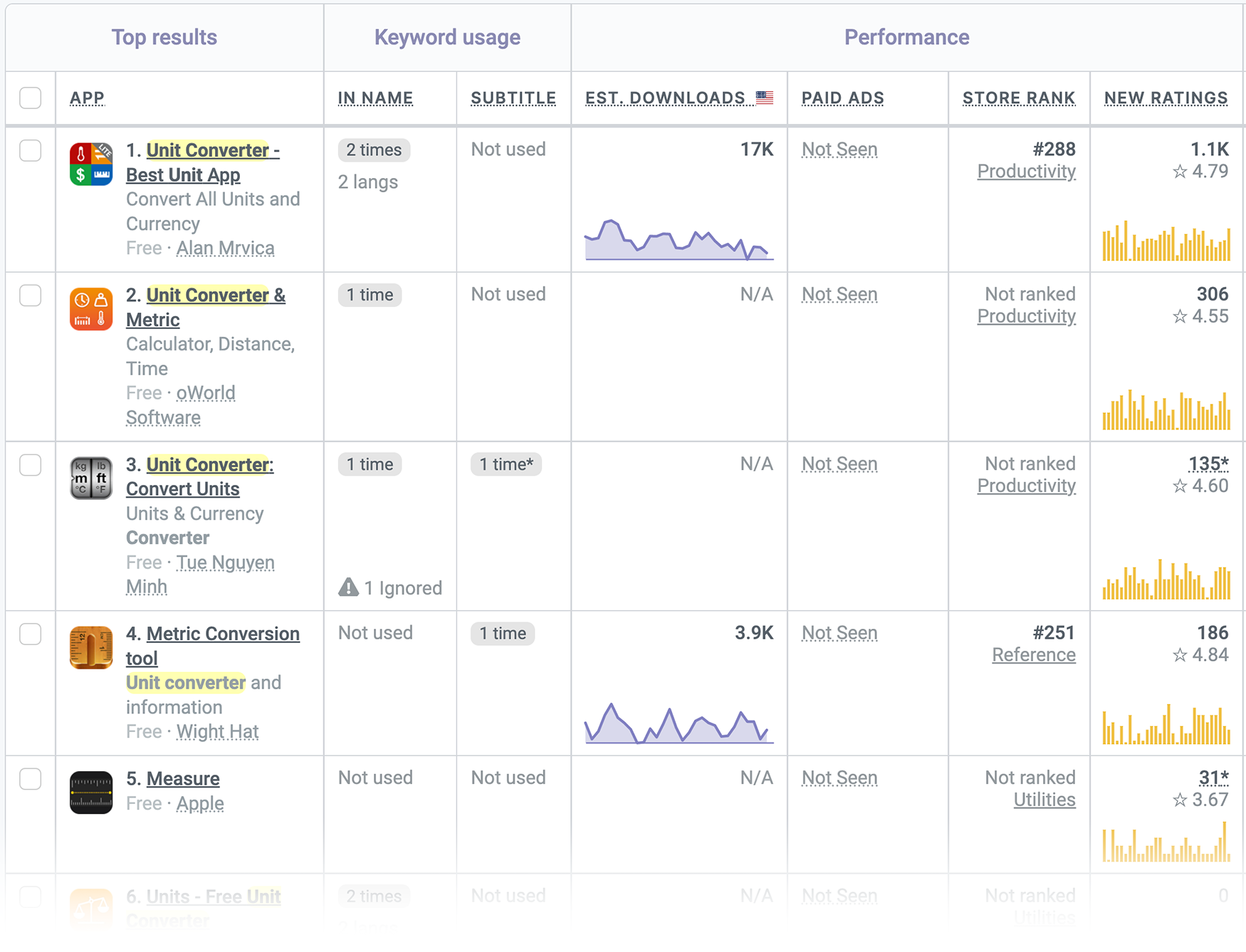 In 1st place we have what looks like the correct choice by the algorithm. Ish...

What do I mean by ish?

It's also in the Productivity category, which, as you'll soon see, is important here.

Below it we have yet another no-brand app. The 2nd place result also has its keyword as the first part of the name but this one has no duplication, which is good. It's also in the Productivity category, which is good, but gets about a third of the new ratings. That's what's keeping it at second and not allowing it to rise up.

If your app is in this situation, there are two things you can do: 1. optimize how you ask users for ratings so you can get more. That's if you have enough new users and haven't optimized it already. Or 2. Find a related/relevant keyword that has a top result with fewer ratings and optimize for it.

That means aiming for a lower popularity score, most likely, which sounds bad, but doing that will allow you to get more traction which will allow you to be more competitive later on. That's when you can come back and compete for this keyword.

In 3rd place we have... you guessed it, another no-brand app that's not doing everything right. There's duplication between the name and the subtitle that's hurting. But it gets fewer new ratings than the second place result and the app in fourth place isn't using the keyword in the name, so the algorithm is still following the rules.

In 4th place we have a no-brand app that's not doing anything wrong per se, but is missing a good opportunity by not targeting the keyword in its name. It's just using the subtitle, which isn't as strong.

With more new ratings than the app above it, just targeting the keyword in the name is all it'd take to rise into 3rd. I think. And I only add that because this one's in the Reference category and no Productivity, which the algorithm seems to be favoring.

And in 5th place we have Apple's own Measure app. The thing about this one is that it's not relevant... Measure will, well, measure things for you and tell you if things are level. But it won't convert inches to millimeters, pounds to kilograms, or anything like that. It's irrelevant. It's also not in the preferred category, but I think that's not the real issue here.

Why is it ranked here if it's irrelevant?

Do we really need to ask this question...

At least it's not first.

I noticed Apple's own apps are placed 5th when they aren't immediately relevant, and lately I've been seeing more "originals" in more search results. If you're competing with an "original" your best bet is to aim for a rank between 1-3.

Going Below The Top 5 Search Results

Since I could only analyze the top 4, I'm going to do something a bit different and analyze all the way down to 10.

FYI - All of these, except for #9, are no-brand apps, so I'm not going to repeat that. I'll also mention that a brand is something worth building. 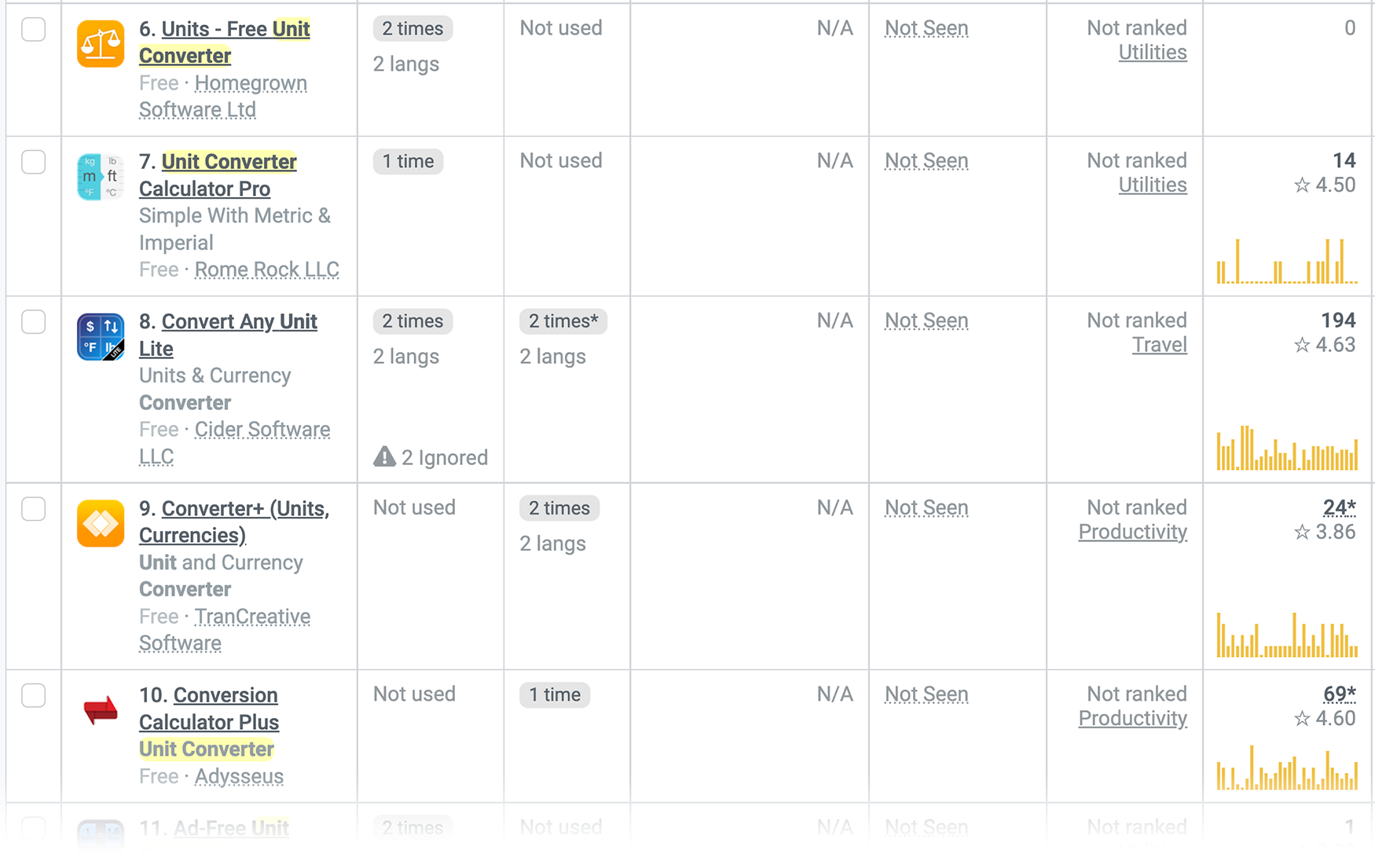 In 6th place we have an app with no subtitle and no ratings. I don't recommend this strategy (anymore) because while it seems to work, it has a limit. In this case, it's helping an app with 0 new ratings appear somewhere decent (for an app with no ratings) but won't allow it any higher.

I suspect that even with a handful of ratings it'll remain where it is now because of the missing subtitle. So, use this strategy with caution.

Right below it, in 7th place, we (finally) have an app that does everything right. No duplication + the keyword is in the name. But! It's not getting many new ratings. The least of all the apps we've looked at so far, with #6 being the exception.

It can't rise much more. The key to growth here is exactly the same as what I said for the second place.

Moving down to 8th place is an interesting change of pace. This app is getting a decent number of new ratings. Enough to get it into the third or fourth spot. But it's not targeting the keyword well. At all.

The words are split and reversed. That's bad. It's also in the Travel category, which isn't the algorithm's preferred category for this keyword. Also bad. And I suspect there's also duplication in the keyword list, but that's mainly a guess. If you own this app please let me know if I'm right here.

In 9th place we have an app that seems to have some sort of a brand. Wow! Converter+ gets enough new ratings to move up a bunch of spots. not enough to break the bank, but at a glance, it feels like it should be higher.

Can you see why it isn't? Duplication... Converter appears twice. The + here is ignored. But that's not all! Unit is also duplicated. The algorithm turns plural into singular so unit = units = bad.

These tiny fixes + a small focus on ratings coverage could really help Converter+ rise into the top 5.

And last, for the second time today, in 10th place is a weird one. The app uses the keyword but only in the subtitle. That's enough to push it down, but with a large handful of ratings and being in the right category, I'd expect it to be higher.

A few things can be responsible for this weirdness: