This is the Biggest Mistake Optimizers Make!

There's a simple rule to ASO that I see far too many novices and experts breaking, and hurting their chances at a better rank. This is true for all keywords, but especially true for the more popular and competitive ones.

It's simple - Don't reuse words from the app's name in the subtitle.

Travel season is upon us, and with flights being canceled and delayed regularly, it's always best to have a flight tracker in your pocket. That's why this keyword has a popularity score of 56, which is pretty popular.

You'd expect that every flight tracker will be carefully optimized for this keyword, but... most aren't, and they make obvious mistakes.

Let's have a look! 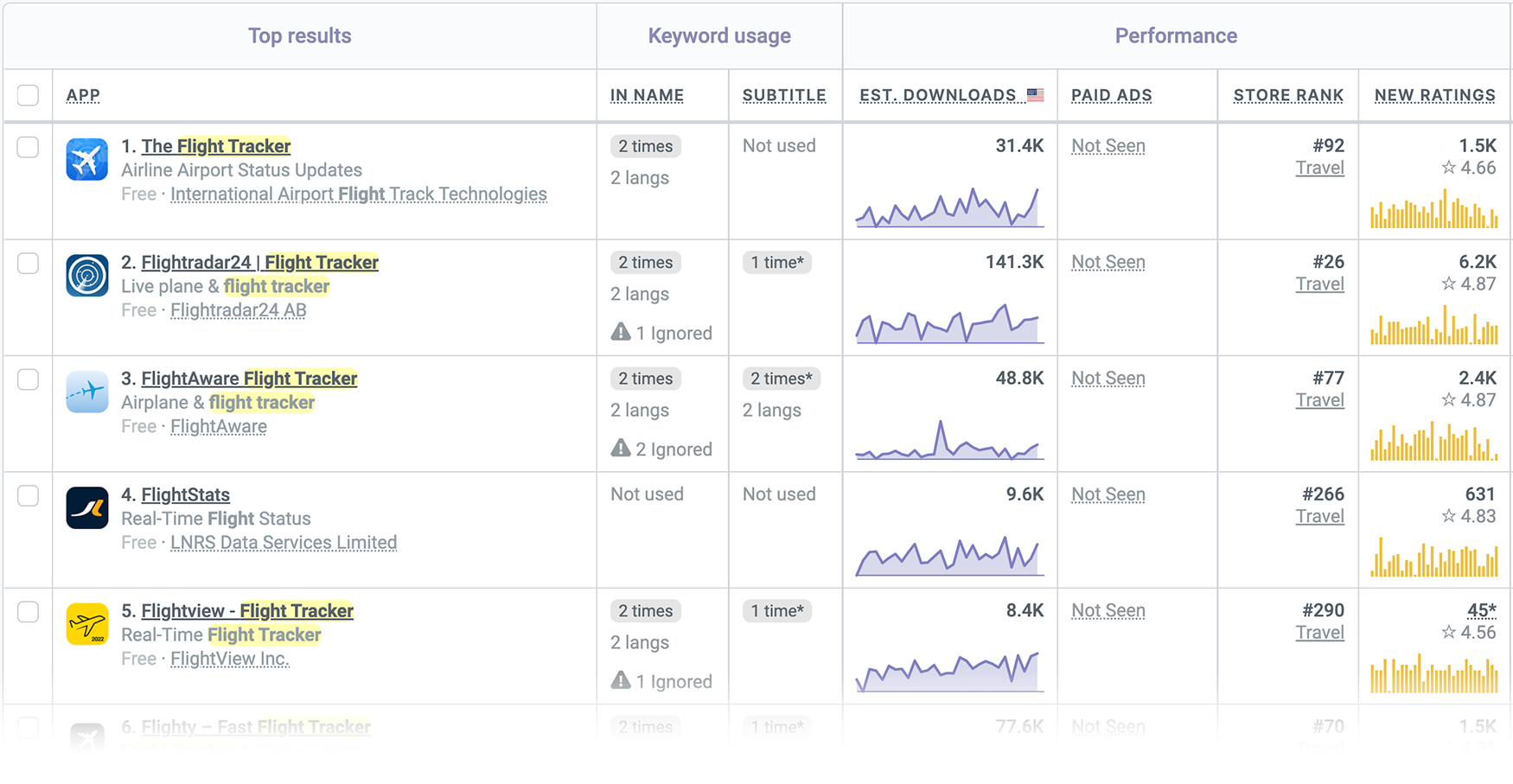 The first result in this set, and the app that doesn't make any mistakes, is The Flight Tracker. There are a few good things going on here. The first is the name, which is almost the same as the keyword. That's great for ASO + simple for users. The second is that there's no duplication. And the third, which is a bit less obvious, is its ability to turn downloads into ratings. It's not the best at it, of this set, but it's also not the worst - that's good enough considering it isn't duplicating any keywords.

Below it is where the issues begin. Second place finisher, FlightRadar24, duplicates both parts of the keyword in the subtitle. And that's not all! It uses the keyword at the end of the subtitle, so the algorithm gives it the least amount of importance.

FlightRadar gets a lot of new ratings. Far more than any other app in this set. That gives it a lot more leverage and strength over placement, and why it's in second place and not lower.

In third place we have FlightAware which seems to have copied FlightRadar's strategy, duplicating the keyword at the end, and generally looking the same. It's in third because it gets fewer new downloads, however.

And when I say fewer I mean about a third. That's a lot for a bad name/subtitle set.

Tip: Don't repeat words between the name and the description.

Fourth place finisher, FlightStats, is an interesting case. The app doesn't have half of the keyword in its name or subtitle, but instead, it's in the keyword list.

The keyword list has become a good place for keywords, and this is a good example of that.

There's something else the app doesn't have - duplication!

FlightStats' use of the subtitle and keyword list is, at best, a happy accident, but it works here because all other apps are duplicating (which weakens them), so the algorithm sees this case as an equal and ranks it as high up as it can given ratings and overall keyword placement.

And last in our list is FlightView, which copied the strategy from #2 who copied it from #3, but with even fewer ratings. That's not all. In addition to phoning home the keyword strategy, FlightView also has the lowest number of new ratings and the lowest ratio of new downloads to new ratings. By far!

There you have it. Follow the rules and you'll rank higher. It's that simple. That's why #1 The Flight Tracker is the top result even though it doesn't get the most downloads or new ratings.

What Can They Improve?

If I were optimizing these apps here's what I'd do to try and rank #1: