🎁 FYI - We just kicked off our Black Friday promotion - The best tools for ASO and app intelligence are half off right now + we're raffling off cool prizes! More info →

Many think that if a keyword has a high popularity score they won't be able to get their app ranked doesn't matter what they do.

That's true for some keywords, but not all. Definitely not all.

In this Keyword Teardown, I'll show you an example of that using a keyword we've looked at before but the results have changed.

If you've been reading for long enough you know that I like editors. Video editors, photo editors, really, any sort of editor. Why? Because people like to edit, making those competitive (read: challenging) keywords that are fun to analyze.

For this teardown, I'm revisiting a keyword I looked at aaaaaall the way back in #24 because its results changed and so did something else. The important kind of something. 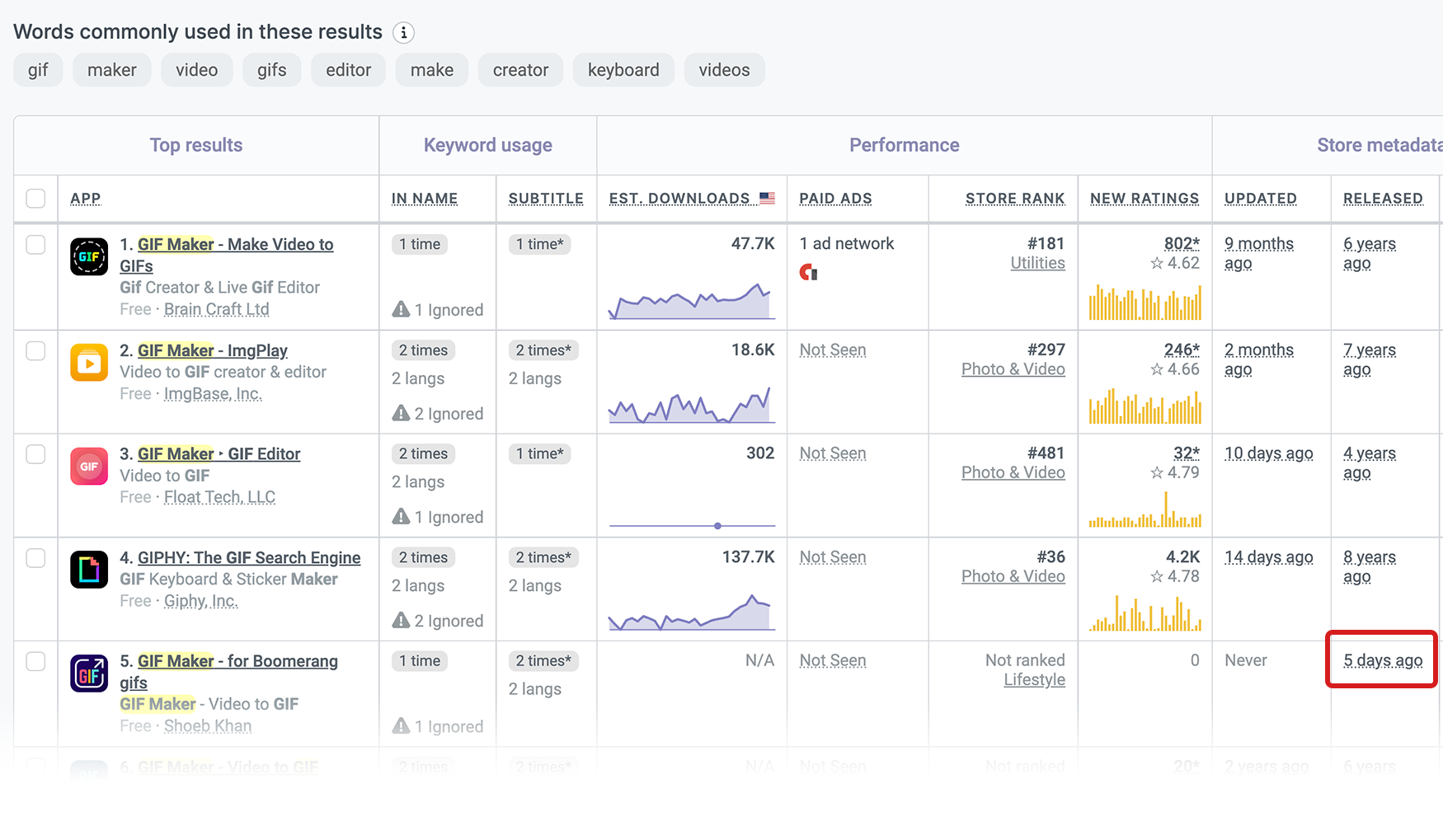 In first place we have GIF Maker, a no-brand-name app that uses the full keyword right in its name. It's duplicating a part of that keyword in the subtitle, which hurts it a bit, but all other apps do it so it becomes irrelevant.

It gets the top position by having the keyword in its name + having a good number of new ratings.

Tip: Although the duplication is "irrelevant" in this case it isn't good. The first app to clean up its act will see great results very quickly.

ImgPlay, right below, got its keywords almost right. It uses the full keyword at the beginning of its name and that's great! It also duplicated "gif" a bunch of times, but since everyone is doing it the penalty is applied to all so it's not important.

it gets significantly fewer ratings than #1, but still enough to remain interesting for the algorithm, which awards it the second spot.

If you don't pay enough attention, this is where things might start to look "weird".

In third place, we have an app with just a handful of new ratings. This one's also brandless + duplicating. I'll get back to it in a moment.

And in fourth, we have an app you've probably used either on the web or from within Slack, if not on mobile. Giphy should be the top dog here. It's got the most new ratings and doesn't repeat any of the words.

How is it below an app with just a handful of ratings?

It's all about keyword placement...

The algorithm places a lot of weight on the name of apps. Much more than the subtitle. Giphy has its keyword broken up between the name and subtitle, which really diminishes the strength of the keyword as far as the algorithm sees it.

If Giphy moved "maker" into the app's name it'd become the top result for this keyword instantly.

And in last place is an app that has no place in this set at all... It's brandless, duplicates everything all over, and hasn't gotten a single new rating in the last 30 days.

Normally, this would be a doozy. A headscratcher. But this otherwise unpopular is in this particular spot by design. See, Apple wants to give new apps a chance to stick, so the algorithm boosts new apps. If they stick, great, the standard rules will apply. If they don't, not-so-great (for the app) but the standard rules still apply and would push the app down.

I believe this is a somewhat new (a year or so) feature of the App Store. Oh, and this app was released 5 days ago, which is why it's the #5 result.

From what I've seen so far, apps that are boosted like this tend to stay in positions 4 and 5. I've seen a few go to 3 but that's not very common.

Before you dunk on Apple for breaking its own rules, I think this is a good feature of the store.

It gives new apps a chance so they have a chance to take off organically. That's pretty nice, and why you should always aim for launching new apps with a campaign that extends beyond the App Store, which would give you more traffic when the app is most visible.

This is How Vrbo is Beating Airbnb

Brands like Airbnb and Vrbo need App Store Optimization just like smaller companies and even indie devs. Here's what happens when they don't.