Can You Target Short Keywords with ASO?

Is there a minimum number of characters a "keyword" can be before you can optimize for it? That's a legitimate question, and the "standard" answer would be to aim for several.

So in this keyword teardown, I'm going to look at a keyword that isn't several characters long but rather just two. And guess what? The same rules you've read about in previous keyword teardowns apply here exactly as you'd expect them to.

There aren't many short keywords that are useful and good to optimize for. DJ is, and if you have an app in this segment you may think the algorithm will treat the keyword differently because it's so short.

It does, to some extent. Look at how many results there are (up top). There aren't 7K apps targeting DJs. But there are that many apps that look like they might because the keyword here is two characters.

Everything else, however, is ratings and keyword placement. 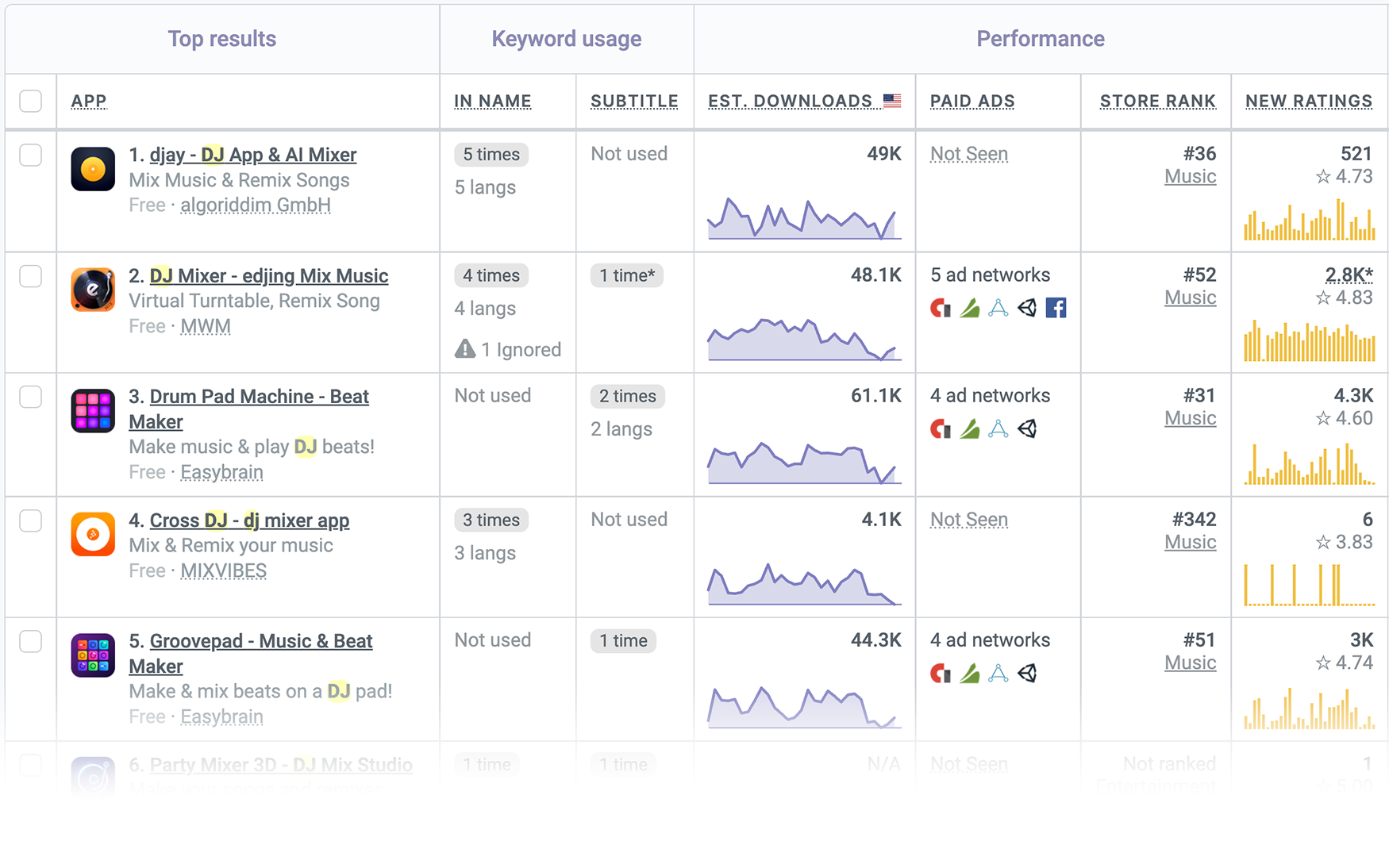 In first place we have djay from algoriddim, who chose to lowercase both the app's and company's names. djay doesn't have any obvious repetition and gets a decent number of new ratings. Not more than apps below it, though our app intelligence shows their downloads are very similar meaning the ratings aren't coming because the app isn't asking (or isn't asking at the right time).

How is djay ranking better than DJ Mixer, the second-place result that gets more than 5x the ratings? I'll give you a hint - it's related to Apple but isn't in-app events or a promoted in-app purchase...

Let's continue and come back to this one. There's another interesting one I want to show you in fourth place.

In second place we have DJ Mixer, which does almost everything right. There's no duplication I can see, the main keyword is right up front, and there are lots of ratings for the algorithm to look at. That's why it's so up high!

Moving on down, we see a generic-looking name in third place. And even at first glance, it's already obvious why this no-name app isn't any higher even though it gets nearly double the ratings of the one above it.

Did you catch it?

This app doesn't have the keyword in its name, just the subtitle. That's no longer enough to climb, just enough to exist in the top, and that's also because it gets a disproportionate amount of ratings vs the rest of the competitors.

On to the other interesting app, and that's Cross DJ in 4th. Right off the bat, you see duplication in the name. Luckily it isn't between the name and subtitle, just the name, so it's not as bad. But it's also not all that good.

But while that's funky, the real shocker is the number of new ratings, which happen to be in the single digits! Six, to be more precise. That's nothing considering the app above it got more than 4,000 at the same time.

Those alone would usually cost an app an appearance in the top 5 results, but what Cross DJ has that helps are both being in a story promoting an in-app purchase. That's how it snags fourth.

And all the way down, at the end, we have Groovepad, which doesn't seem to be trying too hard, and also not getting any good results thanks to that.

The first obvious issue with Groovepad is that the keyword isn't in the name. At all. That, on its own, knocks Groovepad out of a higher rank. But there's more to it - see how the name uses app a bunch of characters already? Same with the subtitle.

The more characters you have in your metadata the more the algorithm's attention to your app is split and the less each keyword gets. Considering DJ has a fairly high popularity, you don't want to be dividing that attention.

Keyword placement and keyword strategy overall are what's pushing an app that gets a decent chunk of ratings into 5th place.

Now, back to the top - djay is the only app of the bunch to be an Editor Choice. It's also promoting heavily with Apple Search Ads, but that's not a determining factor in this case.

Although you can't force Apple to feature your app, did you know you could ask them politely? Check out the guide below if you want to learn how to get your app featured on the App Store.

🎓 How To Get Your App Featured on the App Store

It's not a guarantee, but it's worth a try!

In conclusion, most keywords these days are fair game for ASO, and most follow the same rules. I say most and not all because I haven't analyzed all keywords just yet. Really though, it's the same algorithm so it behaves the same across the board.

When choosing what to optimize for, choose what makes sense for you app and for its audience. Deceptively simple...