Trend vs. Spike - Which Strategy Works Better for ASO?

I bring up the importance of getting more new ratings than your competitors for all of your hard keyword work to pay off and for your ASO to yield results. How many you need is fairly easy to estimate, but there's another important element that you need for those new ratings to push you up the ranks.

New Year's Resolutions are a great driver of downloads, and one of the most common resolutions is to lose weight, so it's not a surprise that apps for intermittent fasting, a type of fasting that rose in popularity over the last few years.

With more than $1.5M in net monthly revenue (what the makers get to keep after paying Apple) for the top 5 results in the US and a popularity score of 53, now's a great time to focus on getting those ratings, right?

One app's doing it but hasn't (yet) climbed the ranks as much as you'd expect. Let's have a closer look and figure out why. 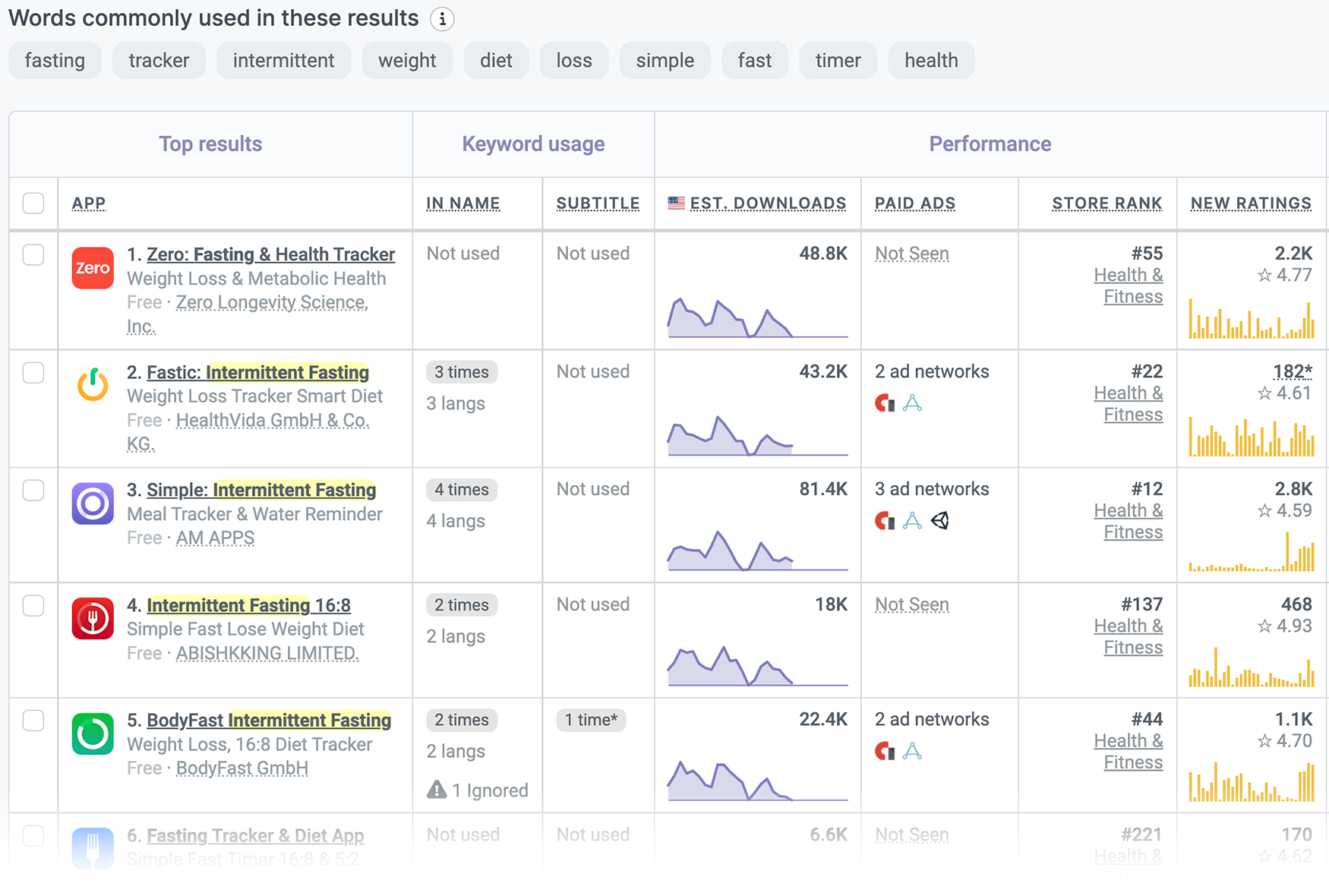 First up is Zero, from Kevin Rose, the guy behind Digg -- which is still online, apparently -- and it's the top result for a very simple reason. Ratings.

If you look at the results closely you'll notice the word "intermittent" is missing from the app's name and subtitle, which means its somewhere in the app's keyword list. It must be very early in the list, and we already know the keyword list is getting attention from the algorithm, which is why it's ranking so high.

But... That can be easily challenged by a competitor, so I'd call this a mistake.

In second place we Fastic, which managed to earn the second spot with a fraction of the new ratings of Zero.

Why? Fastic does a much better job with its keywords and runs an in-app event right now, both give it an edge over lower-ranked apps.

It could easily get to #1 thanks to its keyword strategy but won't because it simply doesn't get enough ratings. Not even close!

And that's a shame considering it's getting just as many downloads as Zero, according to our estimates. So it's really just doing a poor job converting those new users into ratings.

By the way, Fastic could flip its name and put the keywords first and name after, which would get it a bit more "algorithm juice", but with its low ratings, not enough to make a difference.

But! If/when it does optimize how it gets ratings it can easily challenge Zero's top position.

Ready for 3rd? This is where the questions begin.

Simple, in third, gets the most new ratings and uses the full keyword in the name without any obvious duplication. Why is it not the top result?

New ratings are the currency for ranks but it's not simply the count, it's also the trend. This isn't the first time I shine a light on the algorithm's desire for consistency over spikes, but it's a really great example of it in the wild.

When you look below the total ratings, at the trend, it's clear that Zero is getting new ratings consistently while Simple wasn't and is only recently seeing those.

There's both good and bad here - the bad is that an attempt to get a bunch of ratings quickly won't really help with ASO. Not in if it's a burst. That's also the good. The algorithm is progressively making it harder for fake ratings to impact ranks and rewards consistency, which you can build.

If Simple's ratings continue with the new trend for just a bit more it'll rise to the top and push Zero down because it's doing keywords better.

Let that be a warning, Zero.

Moving down to fourth place, we have another anomaly -- a brandless app with more ratings than Fastic (#2) and with the keyword as the app's name.

Brandless apps are, in my opinion, a mistake. Developing a brand gives your app long-term growth and sets it apart. But that's not all too relevant for the kind of optimization we're looking at here.

This brandless app is promoting an in-app purchase, which should help with ranks, but after exploring a few other related keywords, I suspect this app is duplicating the keyword in the keyword list. That used to help, but no longer does. Now it does the opposite and hurts ranks.

By the way, I'm pretty sure this app includes the word "simple" in its subtitle to target the name of the competitor, not to say the app is simple to use. Such a generic keyword could be confusing, but overall it's still wasteful to give your characters to competitors.

And last for this list is BodyFast, yet another interesting result. Interesting because it's getting even more ratings than the brandless app and Fastic, making it seem like it should be much higher, but even I can't really explain what's going on here.

But I have a guess!

What I think is happening here, and this is a bit speculative, is a bug we've seen before where the last character of the name is getting chopped off is preventing the algorithm from indexing the full name.

I say that because when searching for the full name - the last g, BodyFast is the first result, and it isn't the only app that uses the keyword in the name in that way so there's no real reason it'd be the top result.

The thing is, the name isn't exactly 30 characters and there are no special characters or even invisible ones here. But I still think this is it.

Fastic and Simple, two results that use the exact same template for their name, are shorter by one character, which is why they don't get hurt by this.

A few other apps ranked below the fold, follow the same name template, and most also appear in the secondary search I rank, yet Simple and Fastic don't, so something is definitely off.

That's all I have for you today. Learned something new? Please share it with others. Subscribe to the newsletter for a new Keyword Teardown next week. If you have any questions or comments, you can find me on Twitter.

The Tools You Need for App Store Optimization 👇