The Easiest ASO Mistake to Avoid If You Want Downloads

One of the biggest ASO mistakes I see in the App Store is apps without keywords in their name. Some developers prefer the name to be "clean".

That's bad for two reasons - a technical one and a branding one.

In this teardown we'll see an example of why this is a technical mistake, and also what you can do if your competitors are making this mistake.

So much has gone in-app these days that it should come as no surprise that getting a loan is one of those. With a high popularity score, lots of competition, and nearly a million downloads a month, you'd expect to see pretty optimized apps, right? 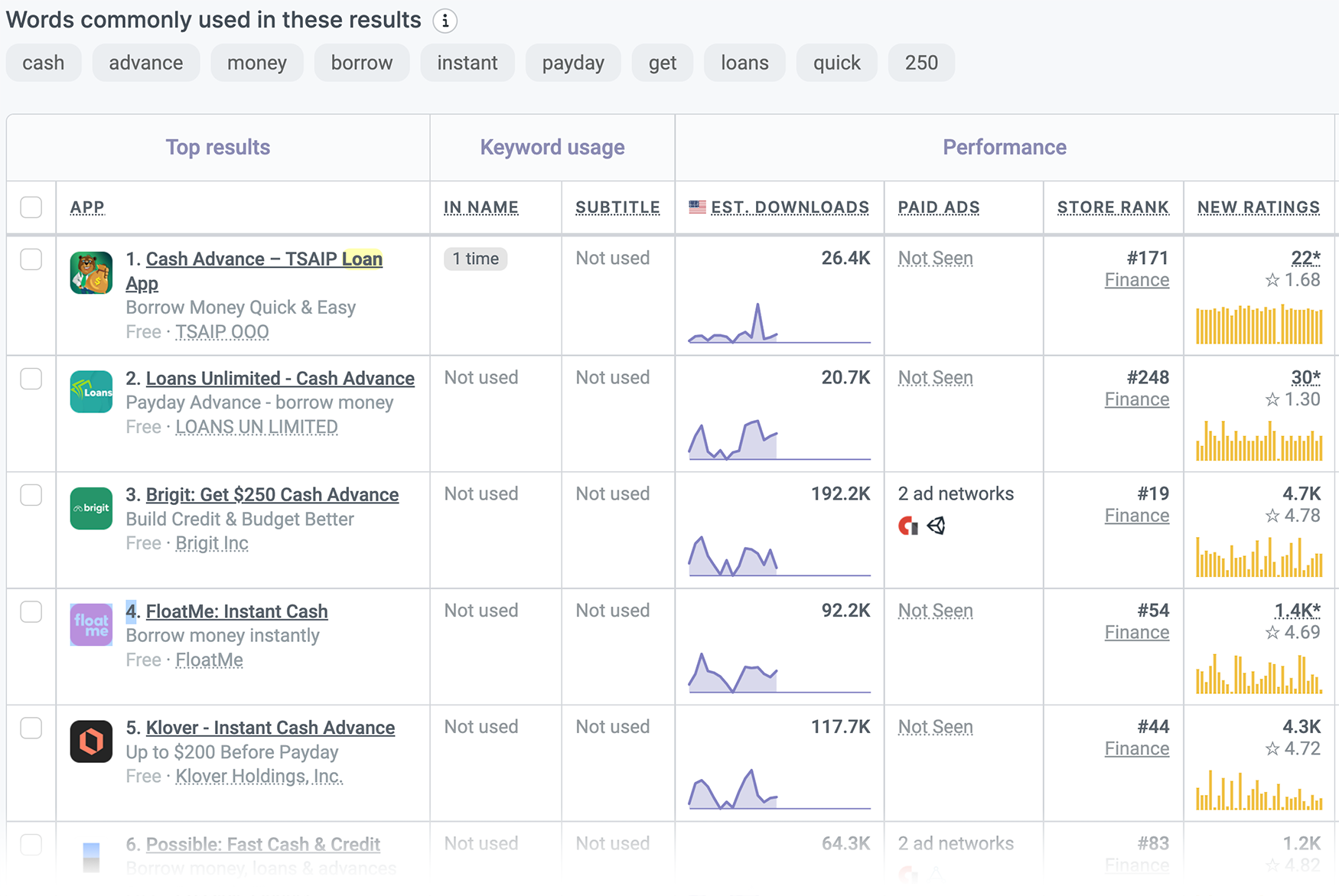 In first place we have an app that has just 22 new ratings in the last month. For a keyword with a popularity score of 58. What's going on here?!?!?!?!?

Easy. TSAIP is the only app of the top 5 to actually include the keyword in its name. That's right, the only one. Talk about a missed opportunity here...

It's important to note that the low number of ratings, in this case, has nothing to do with downloads but rather that the app likely isn't optimized. For most standard keywords this would mean poor ranks, but because the competition here is asleep at the wheel, it isn't.

Don't let the competition's incompetence be an excuse for not optimizing.

Moving on down we have Loans Unlimited the only other app that targets this keyword. I say target and not includes because it went for the plural form and not singular. Someone must have not looked at the data because the popularity score for "loans" is 11 points lower, and "loan" is already pretty much up for grabs.

It gets to 2nd place because it at least tries, even though it only got 30 new ratings in the last 30 days. And it's worth noting that this one's also not doing a great job getting ratings.

Both apps have a very low average star rating which could be related to why people aren't leaving a rating. The average itself isn't relevant for ASO.

The next three don't include the keyword in their visible metadata, and as you'll see, just including it would propel each to the top. Instantly.

In third place, we have Brigit, which got nearly 5K new ratings in the last month. That's several orders of magnitude above first and second place.

But, Brigit doesn't mention "loan" in its name. Or subtitle.

FloatMe, in 4th place, got 1.4K new ratings, which in case you forgot, are the currency for ASO, in the last month. It, too, could easily outrank the top pair by just including the word in the name.

And the last in this batch is Klover. 4.5K new ratings, no mention of "loan", and the last place of this group. Such a simple mistake.

There might be a legal/Apple reason for why these apps don't include the keyword. But while that could be the case here, there are countless other keywords where I see the same results and the same opportunities.

If your app makes this mistake, the good news here is that it's a really easy one to fix. You don't even have to go all out right away. Start by putting keywords that are relevant into Keyword Inspector and see how competitive they are.

If you see an opportunity like this one, bingo! But even if you don't, it's better to have something instead of nothing so use them in your app's name and push out an update.

Those keywords will help the algorithm understand your app, and the more it understands the more likely it is to present it to users.

But your job is not done yet. Next, you'll want to spend a bit more time researching keywords you can actually rank well in.

Here's how I do it. It's pretty straightforward and will give your app a much better opportunity for more visibility.