India says no to PUBG

India has been fighting China for a while now, and developers are in the crosshairs. This week, India confirmed banning several high-profile apps and games including popular battle royale game PUBG (which Apple featured last week).

Looking at the numbers, the ban is likely to make Tencent, PUBG's developer, very unhappy. PUBG for Android earned an estimated $1.6M in India in August, and a tad more than $11.8M in 2020 according to our intelligence data. For every day PUBG is blocked, Tencent is losing roughly $53,000. Oh boy! 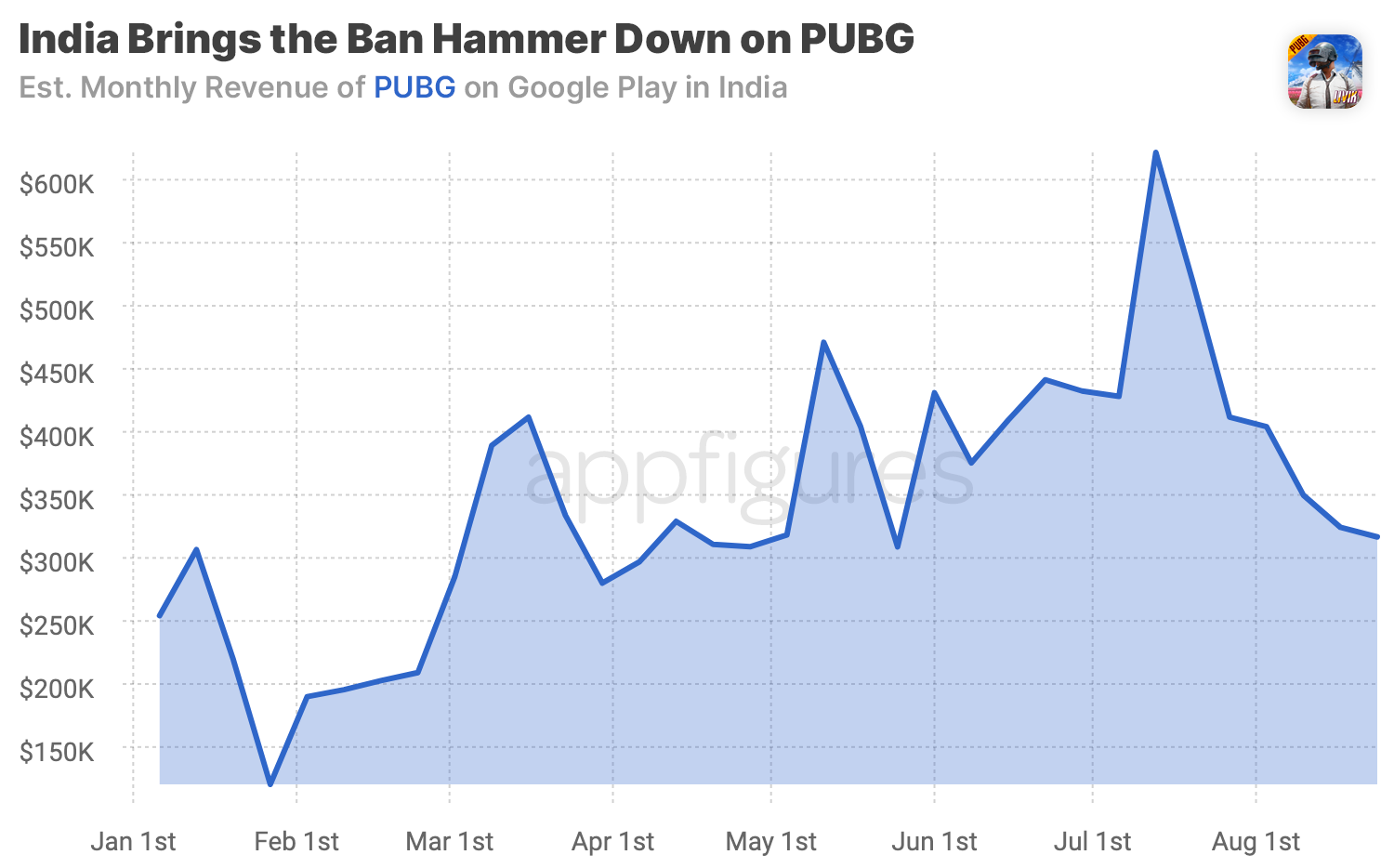 Just like last week, two more companies have filed to IPO this week. Here's a look at the way to the IPO:

Prescription deal finder GoodRx has been seeing a beautiful upward trend in downloads in the last few years, with downloads growing 4.5x since 2017. GoodRx added 667K new users across in August and a little over 5.8 million new users in 2020, according to our intelligence data.

With no clear competition and telehealth capabilities, GoodRx could easily take on telehealth-only apps like Teledoc, the leader in its group, without breaking a sweat. 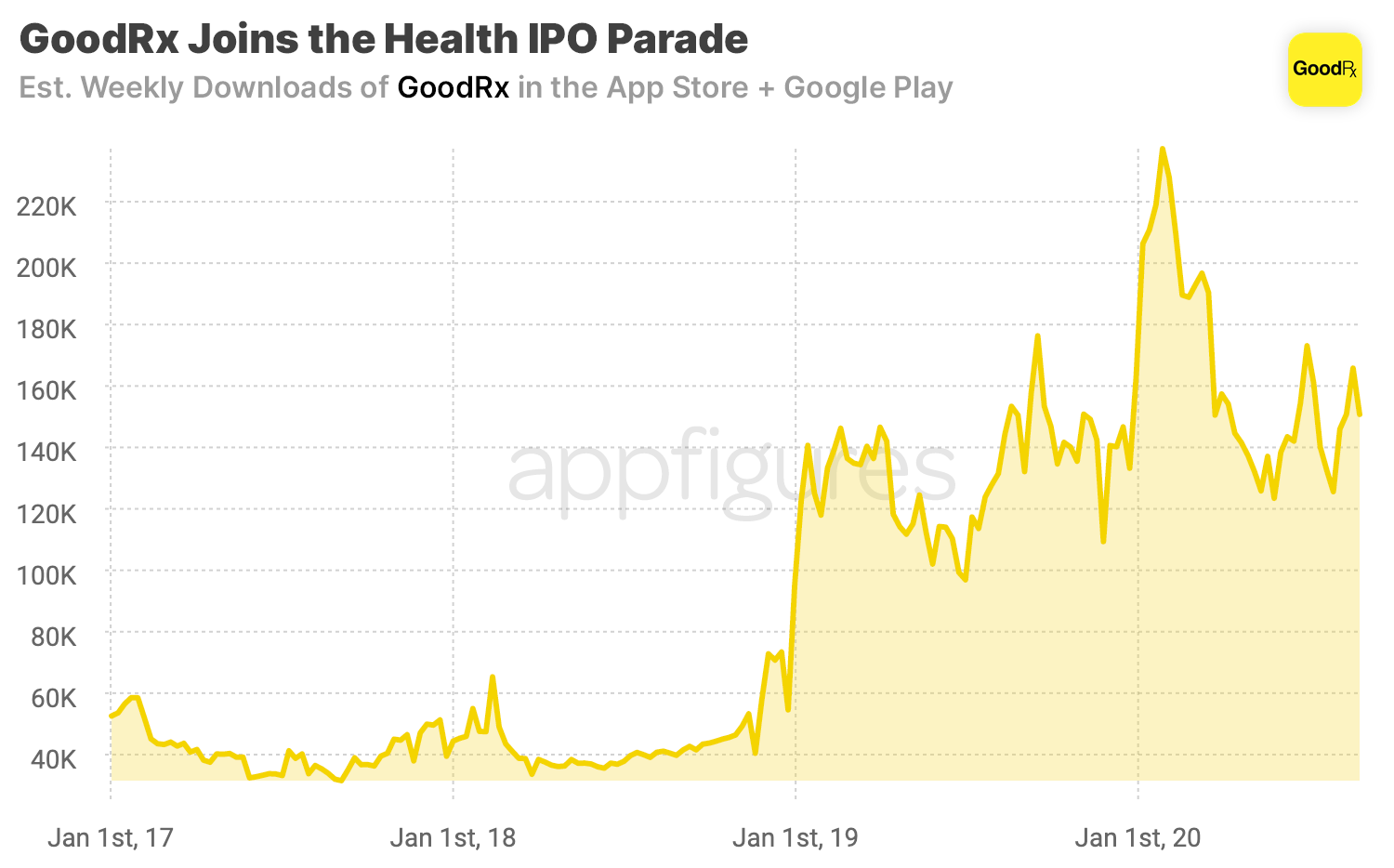 Shopping giant Wish also filed this week. Unlike other shopping apps, Wish's catalog of extremely low priced items has made it a crowd favorite and a threat to rival Amazon. We estimate that Wish was downloaded by more than 94 million new users in 2020 across the App Store and Google Play globally.

For context, Amazon had just a few more downloads than Wish, which we estimate to be just about 99 million in the same period. And that includes a sharp growth in India this summer, a market Wish isn't very strong in (yet?). 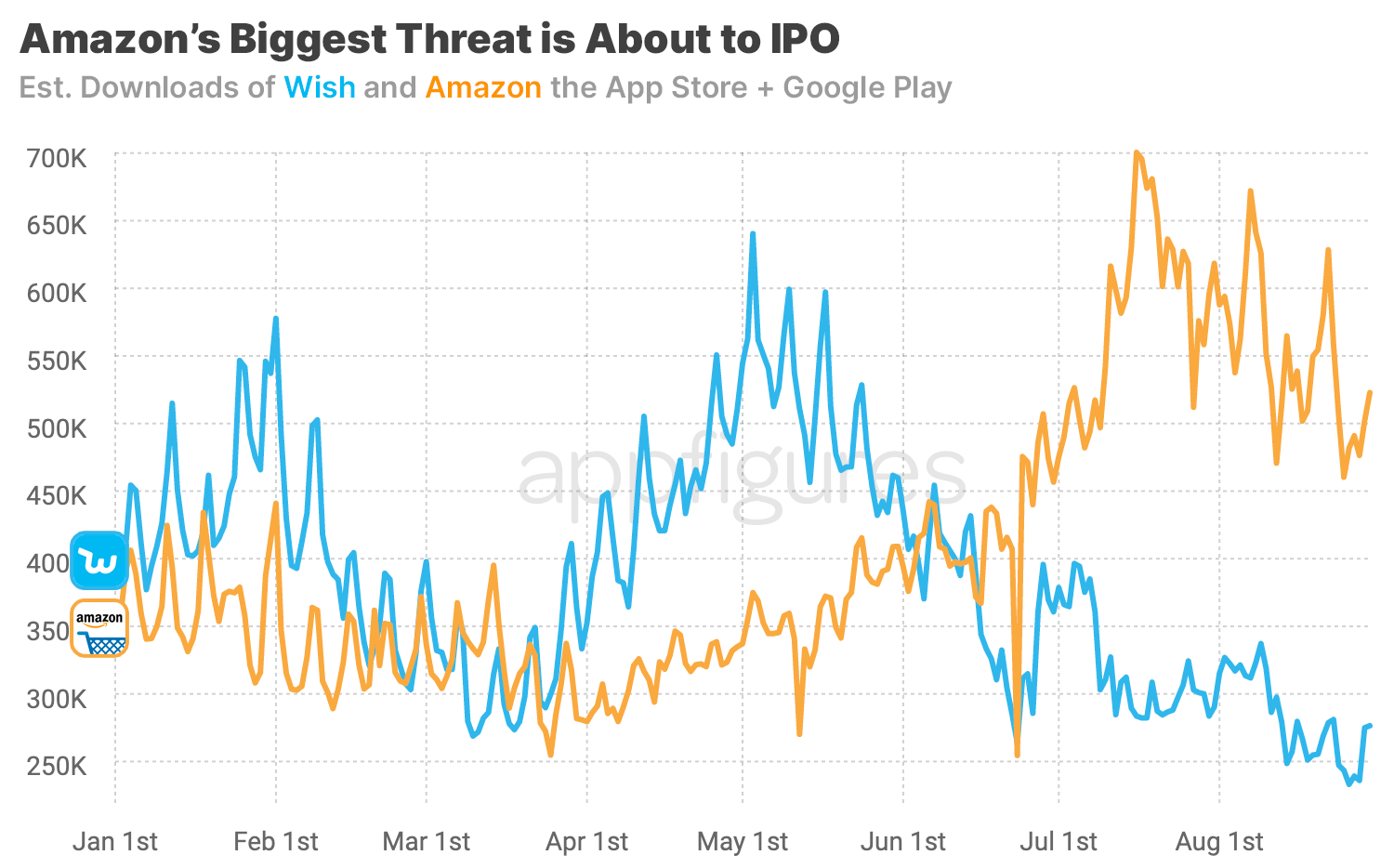 Is IGTV finally catching on?

Instagram's like-TikTok app IGTV has seen a surge in download this week. Downloads jumped from an estimated 5K downloads per day in February to 47K last Monday. Although not an all-time high, this surge is IGTV's highest this year as it attempts to go head to head with embattled TikTok.

This means good news for IG video creators, who could be exposed to a larger audience. IGTV has a lot of growing up to do to take on TikTok, though, which gets about 5x the downloads every day. 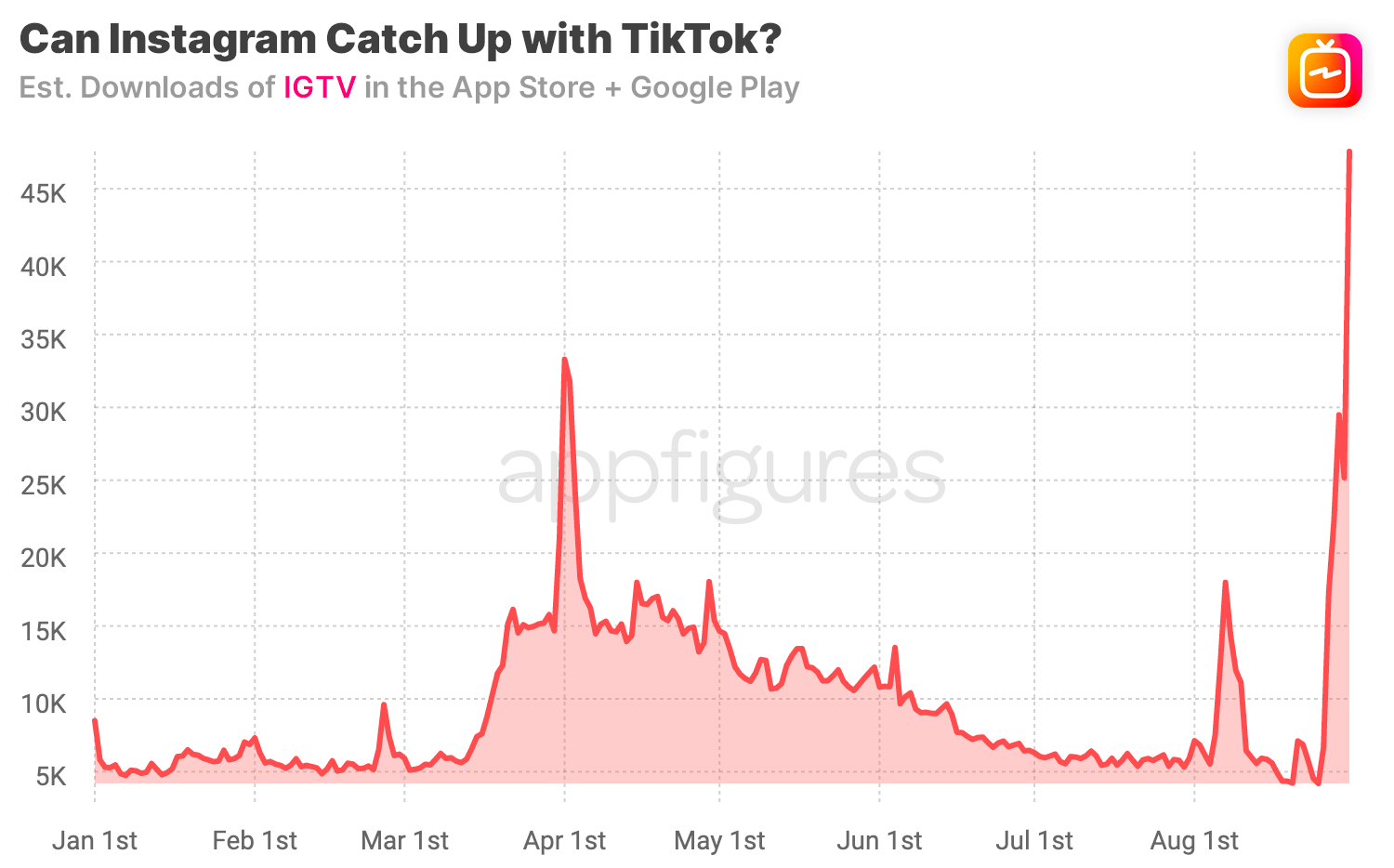 Speaking of creators, Patreon, a platform that lets creators earn money from fans, hit a new all-time high. Daily downloads hit 7,471 on 8/1, according to our intelligence data.

Patreon's previous high happened in the pre-lockdown days, back in February. This should be good news for creators who rely on Patreon subscriptions, which are becoming more popular. 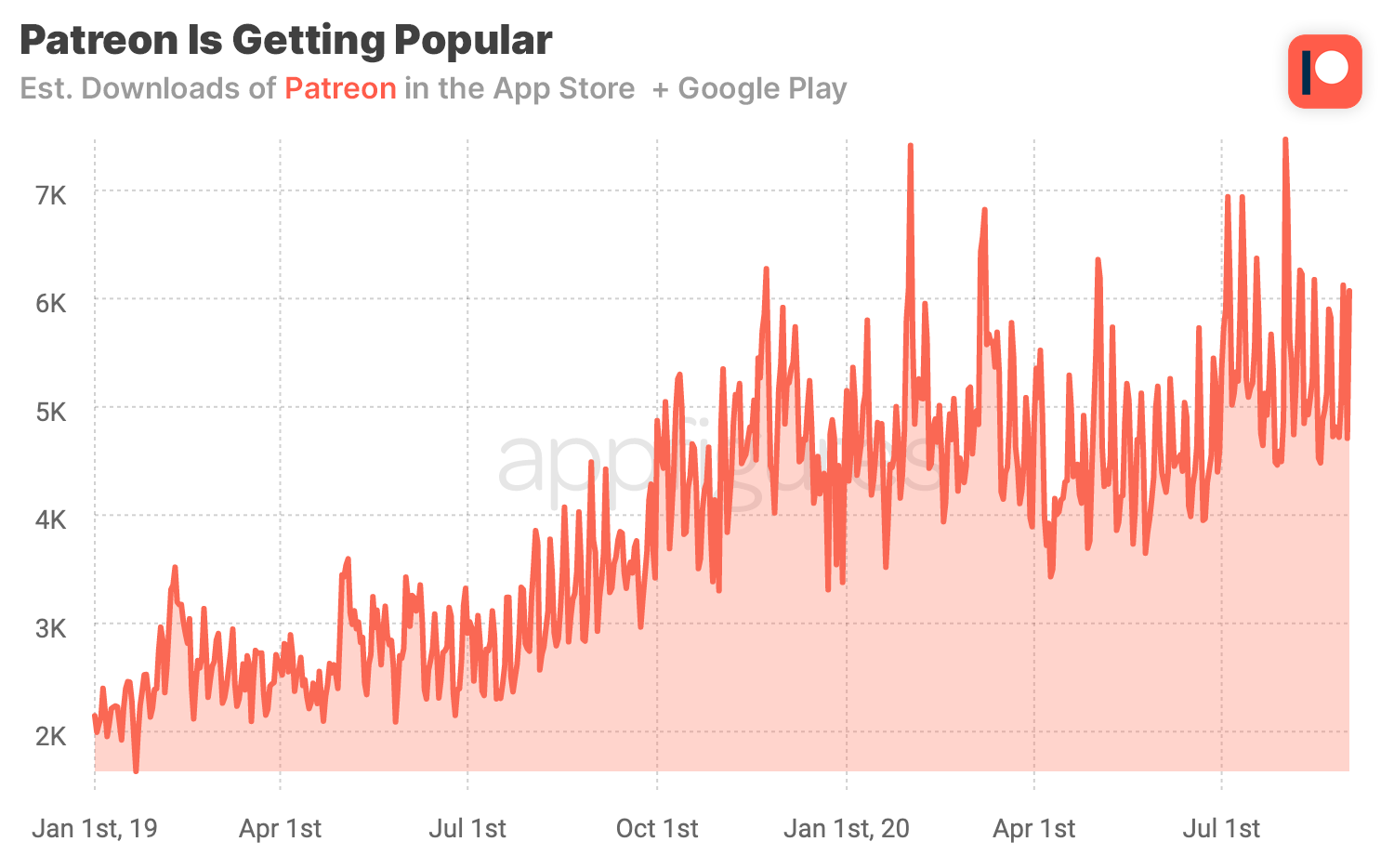 Get to Know Your Competitors