Stocks are up this week, and although the Mobile Download Index isn't, the Mobile Revenue Index is. Continued uncertainty, rough presidential elections, and a second wave of lockdowns mean fewer new downloads across the board, but users are spending more time and money on apps they already have.

In the U.S., the Mobile Revenue Index was up more than 8 points this week, with a 16.24 point gain in the Lifestyle category, where news apps are, and modest gains of 3.49 and 3.28 in the Social Networking and Games categories, respectively.

1. The real winner this week

A complicated and rough race for president in the U.S., where more people than ever went out to vote, has given rise to the need to keep up with the news, causing downloads of both CNN and Fox to skyrocket.

On Tuesday, CNN saw 94K downloads, and Fox 74K, the highest numbers this year. But things didn't end there. On Wednesday, downloads topped 163K for CNN and 105K for Fox across the App Store and Google Play. 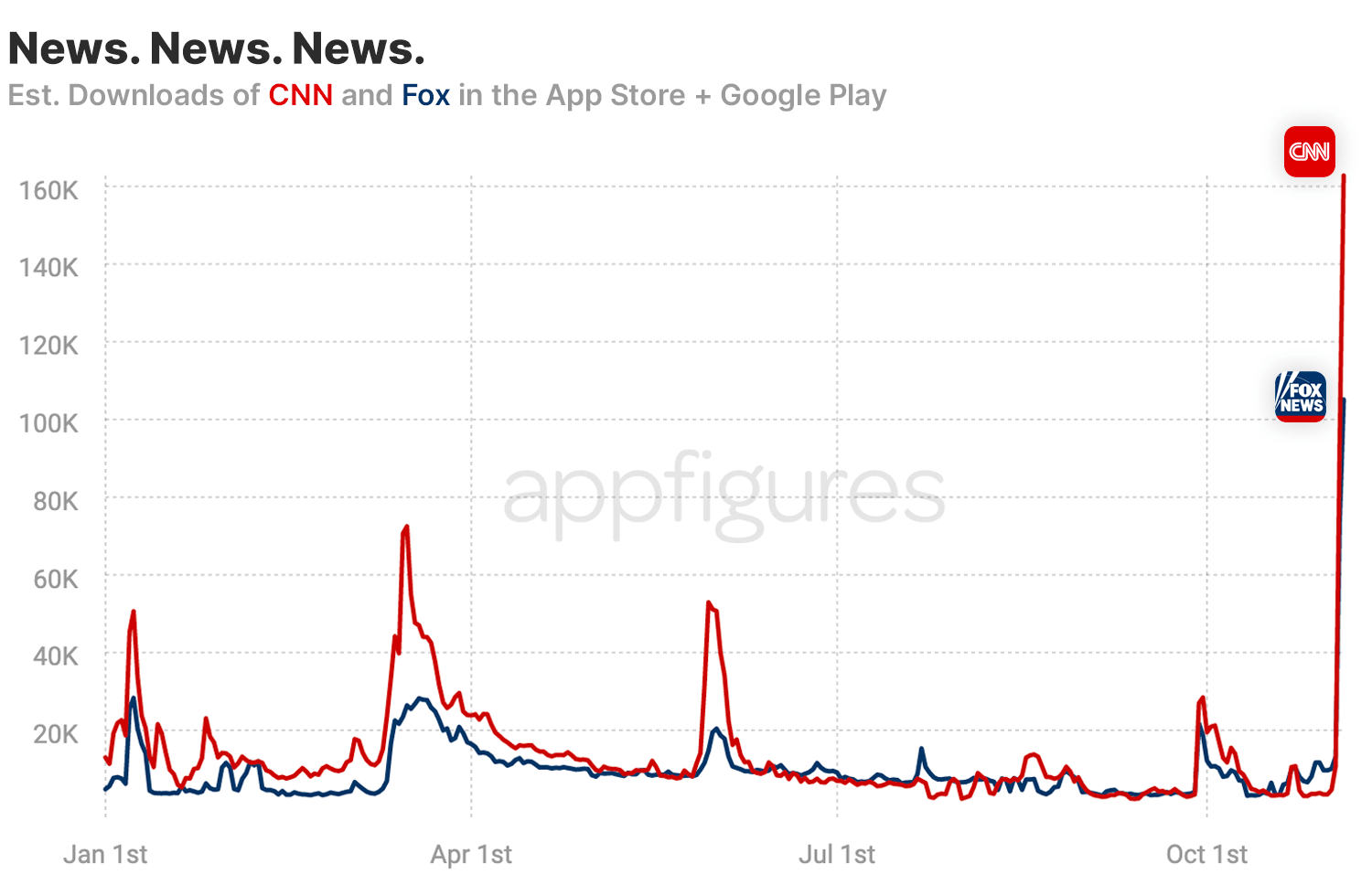 FYI - This is a glimpse from a new report we're putting together about news consumption during the elections.

Not all news is real news. Or, at least that's what nearly 20,000 people discovered after downloading an app by the name of "Elections Watch 2020" this week.

The app, which looks and sounds pretty official, is really not, and according to the very negative reviews, isn't even accurate.

That didn't stop people from downloading it in droves this Tuesday and Wednesday. 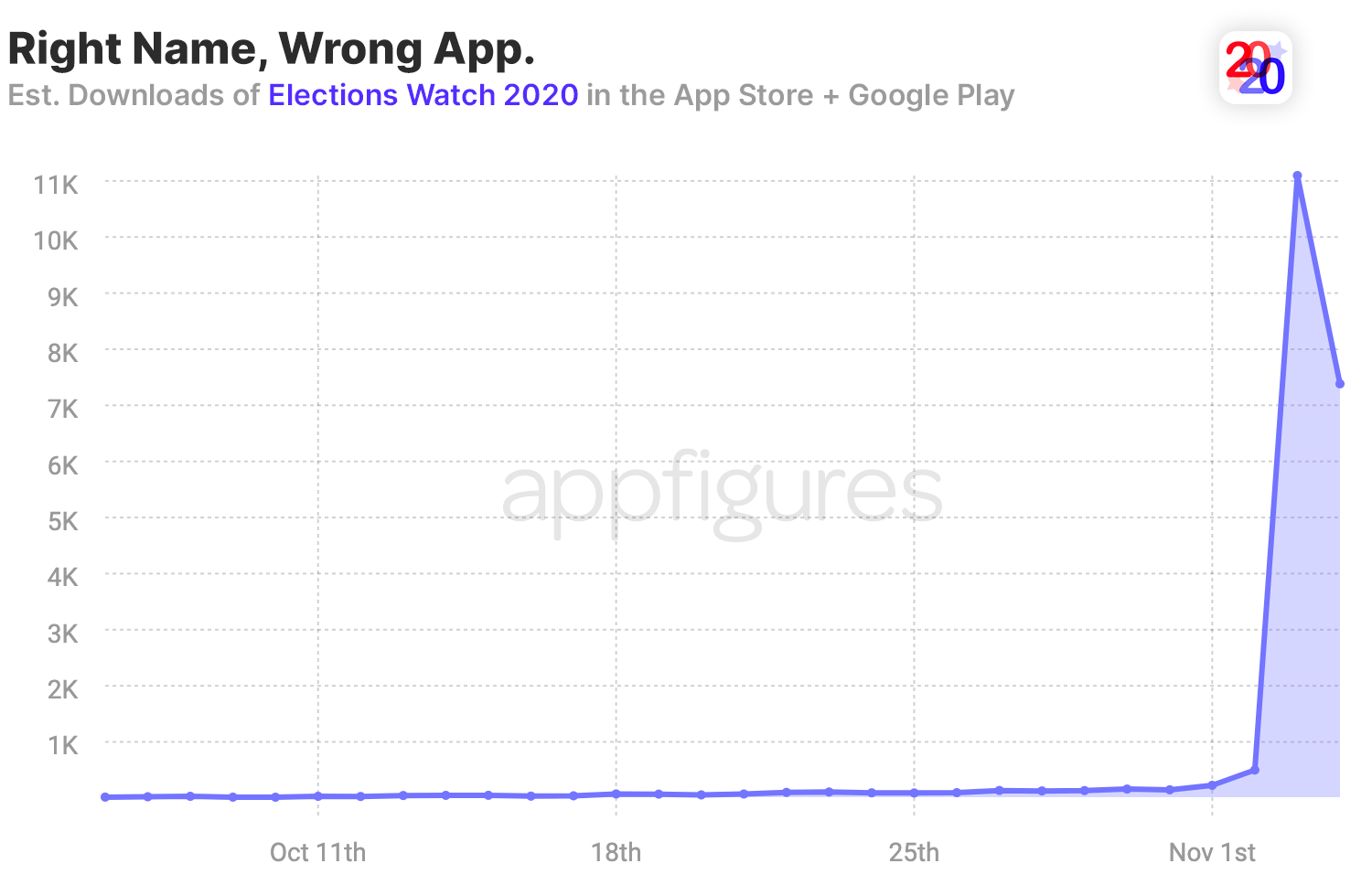 If you build it (and name it right), they will come...

Remember TikTok? Well, this election cycle has brought nothing but great results for the teen favorite.

This week, daily revenue in the U.S. has hit a new all-time high two days in a row! On Tuesday, TikTok raked in an estimated $273K from its U.S. users across iPhones and Androids.

It didn't end there. According to our estimates, on Wednesday, revenue went up to $282K, beating the previous record of $265K in April by 3% and 6.4%, respectively. 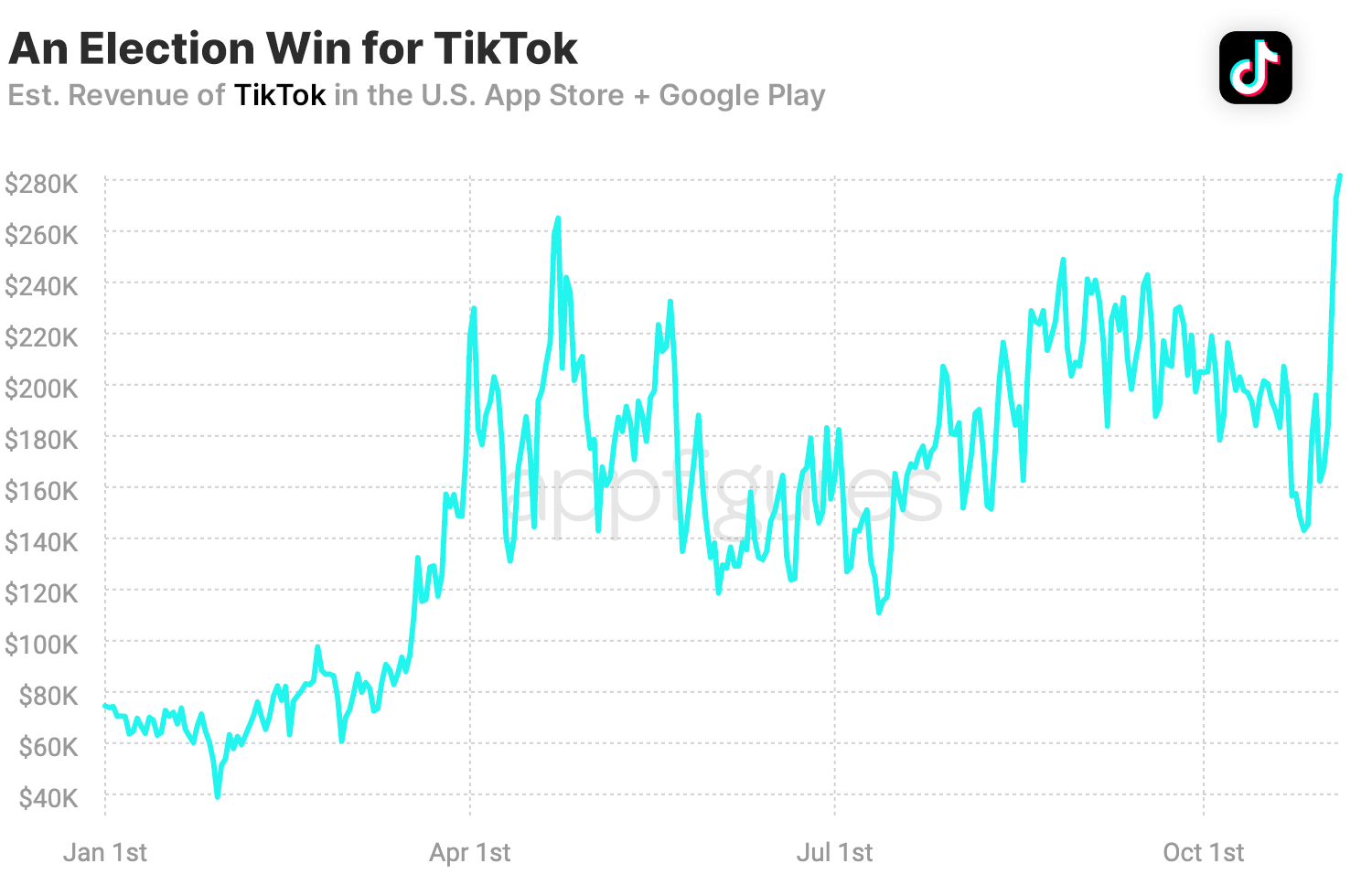 Downloads of Netflix are indicating binge time is over. The app had its lowest web of downloads last week, with just 3.26M downloads, according to our estimates. That's down from 3.3M estimated downloads at the end of September.

Although 3+ million downloads isn't "low," the downward trend, coupled with Netflix's latest price increase and the end of its free trial, are signals that Netflix's dominance is being challenged. 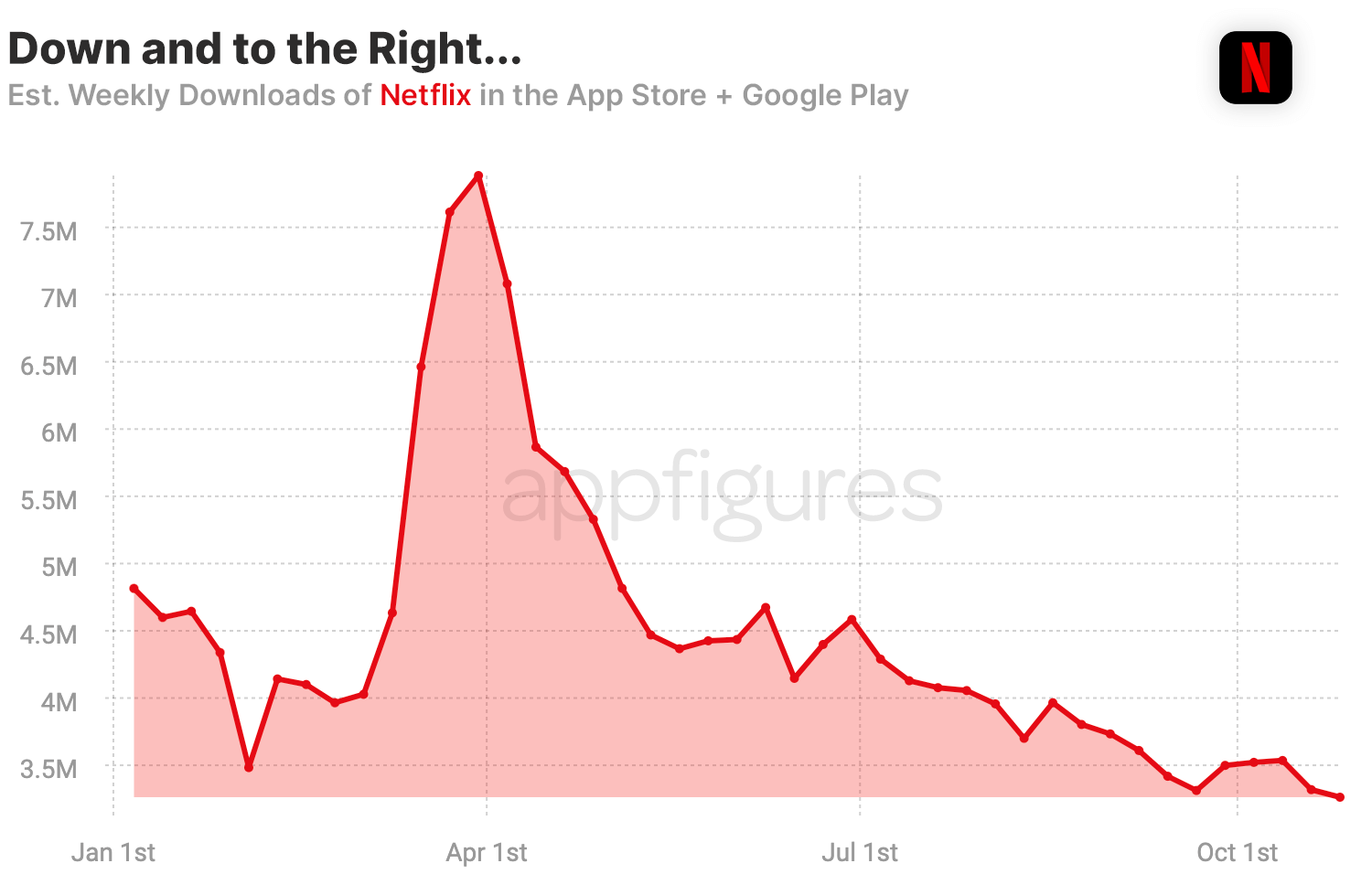 "According to Appfigures estimates..."

Downloads of the Alexa app, the one that's required to set up the device before you can enjoy light-hearted conversations with it, exploded in October. According to our estimates, the Alexa app saw 3.2M new downloads in October across iPhones and Androids. The best October to date.

Traditionally, the app's downloads spike in December, so we may see a second spike coming next month. 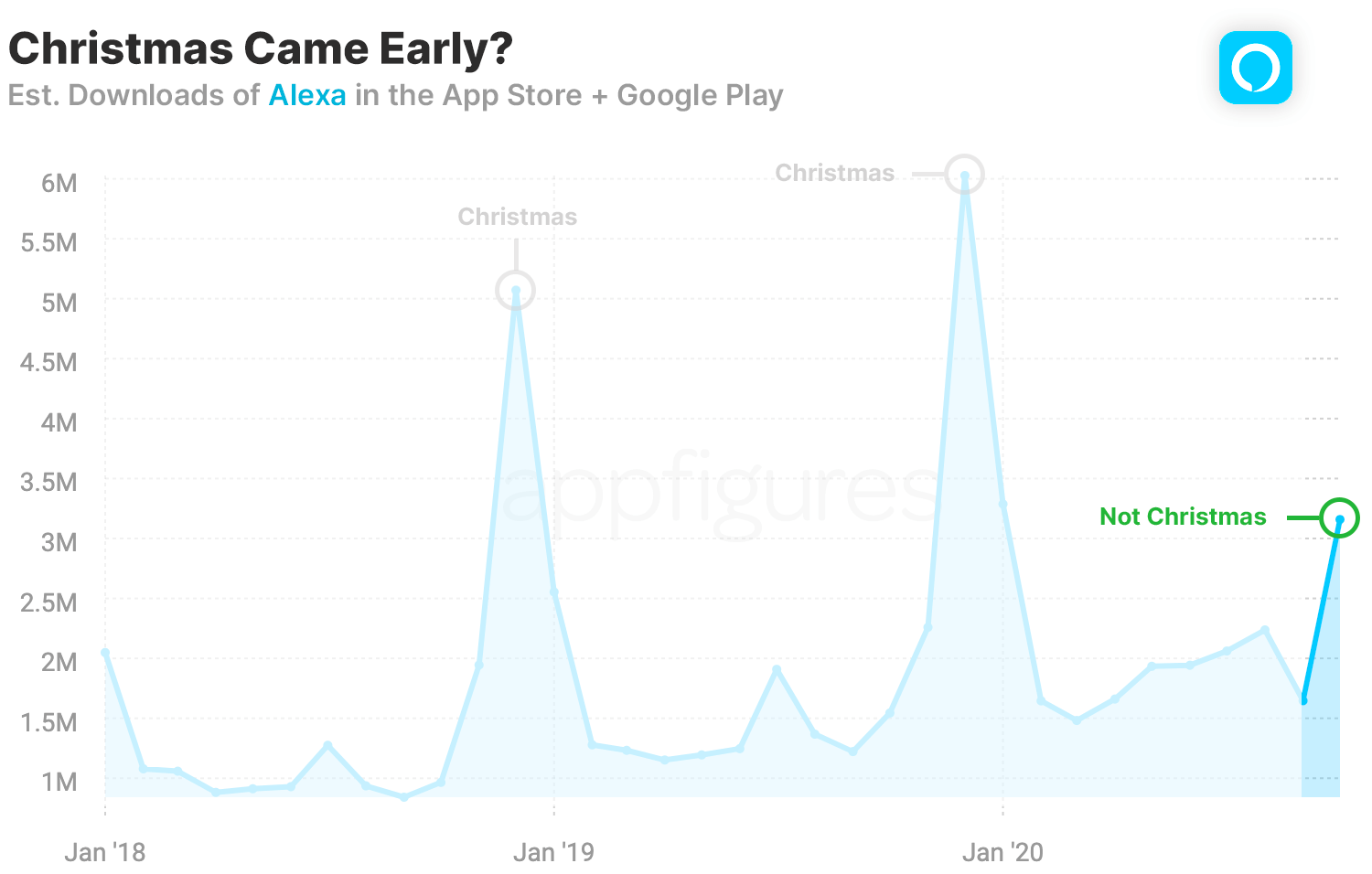 If you're planning to gift one of those, better buy it early.