📈 The rally is over as downloads slowed down considerably after the rush we saw in the last few weeks. That's only until Christmas and New-Year's downloads hit.

FYI - We updated the Mobile Download Index with new categories, including many game sub-categories, this week. Check it out →

When it comes to chatting, we usually talk about Slack and Microsoft Teams, but if you're a gamer, there's really only one option—Discord.

The gamer-focused chat app raised a hefty H round last week, which puts its value at $3.5B. How did it get there? Between good organic growth, lots of people staying at home, and games like Among Us! becoming massively popular, Discord has grown a lot in 2020. 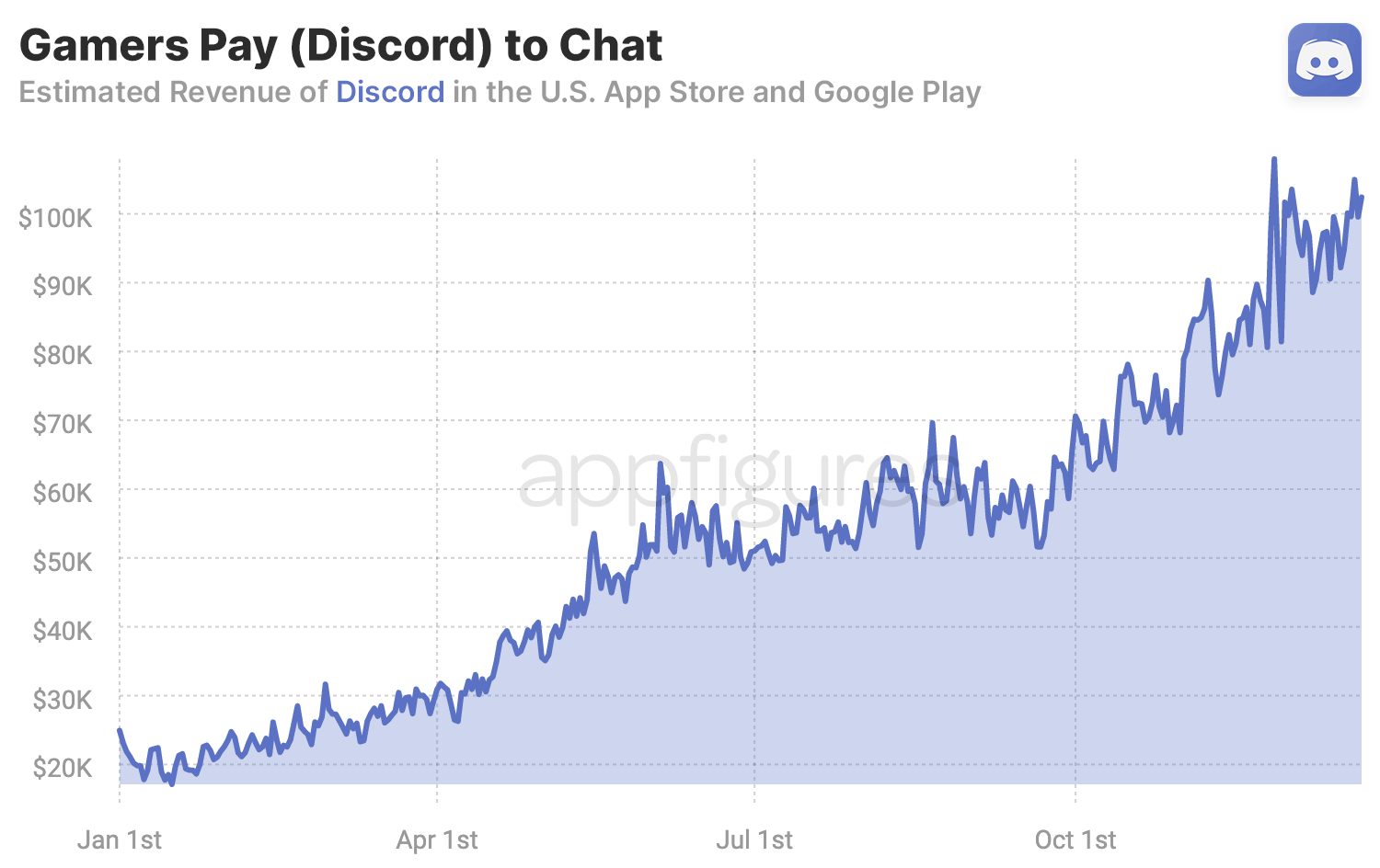 Bumble, the dating app that took swiping to the next level, is planning to IPO soon.

Why? Because it's got the numbers to back it up. Since 2018, Bumble's revenue grew steadily, and as a result of everyone dating from home, U.S. revenue rose to over $15.2M in November. Year over year, Bumble's U.S revenue grew by more than 42%, according to our estimates. 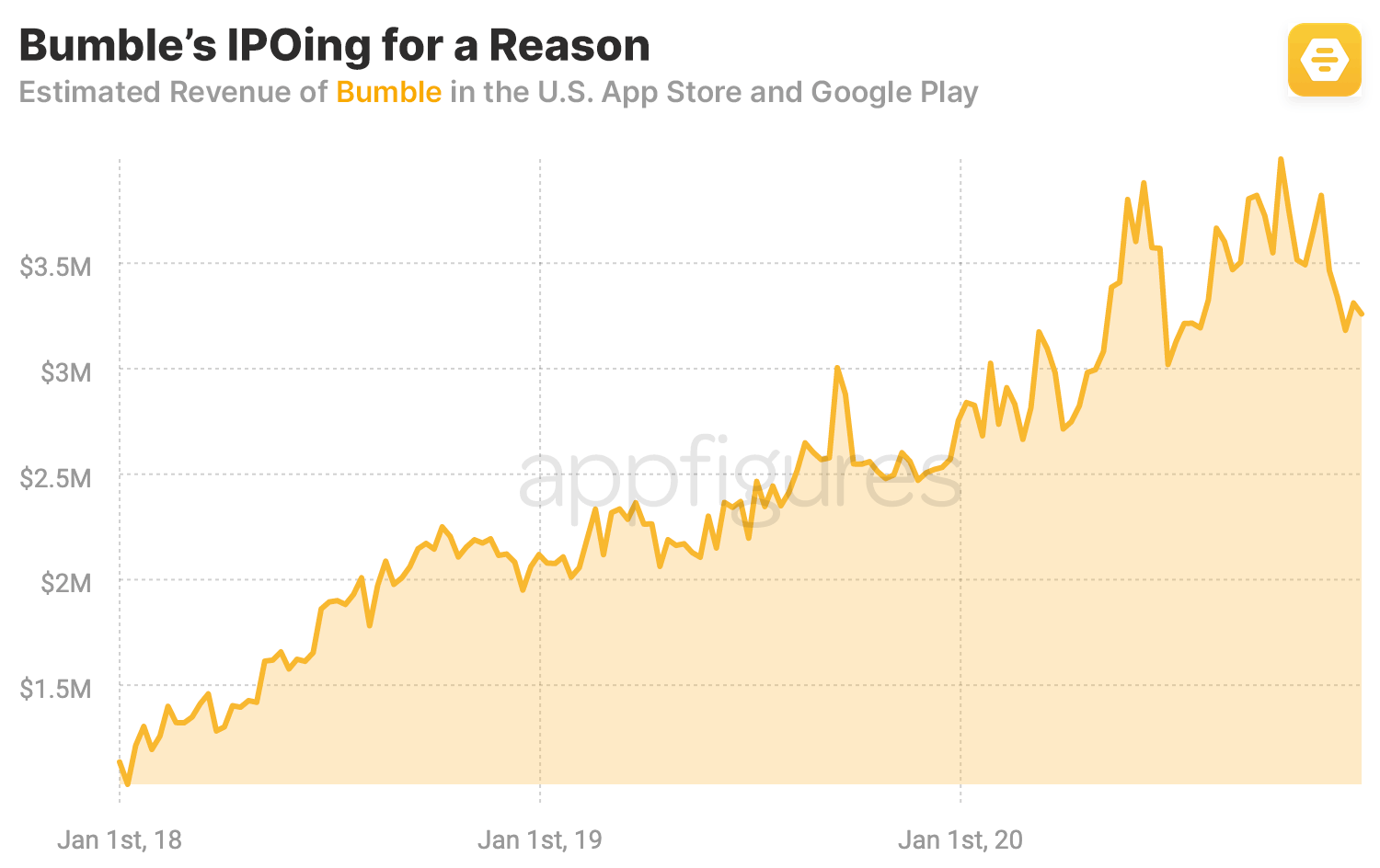 Telegram has become the go-to communication app for many social activists in 2020. This week, the platform announced they'll be adding voice calling capabilities in addition to text, which is pretty significant given its massive scale.

In 2020, downloads more than tripled, adding more than 372 million new users worldwide, most of which are on Android and not in the U.S.

The service also expressed interest in beginning to monetize in 2021. We'll be keeping an eye on that effort. 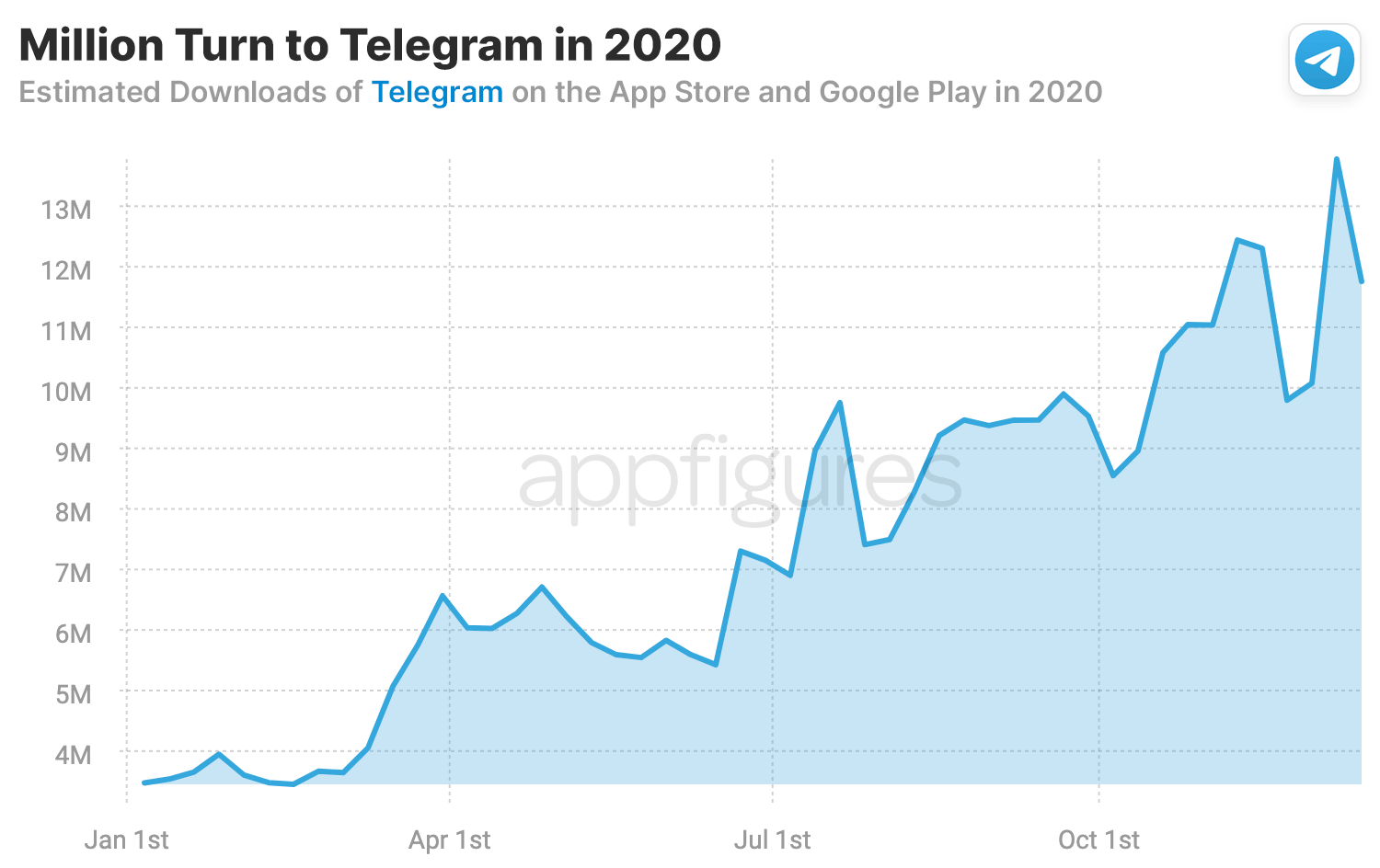 I looked at our Top SDK charts this week and noticed that Google has a pretty deep reach. All top 5 most used SDKs in Android apps and games and two of the top 5 on iOS belong to Google.

Firebase, Google's back-end and analytics service, and AdMob, Google's monetization platform, are used by 1.9 million Android and iOS apps. For context, that's 76% of all 2.5 million apps we analyze. 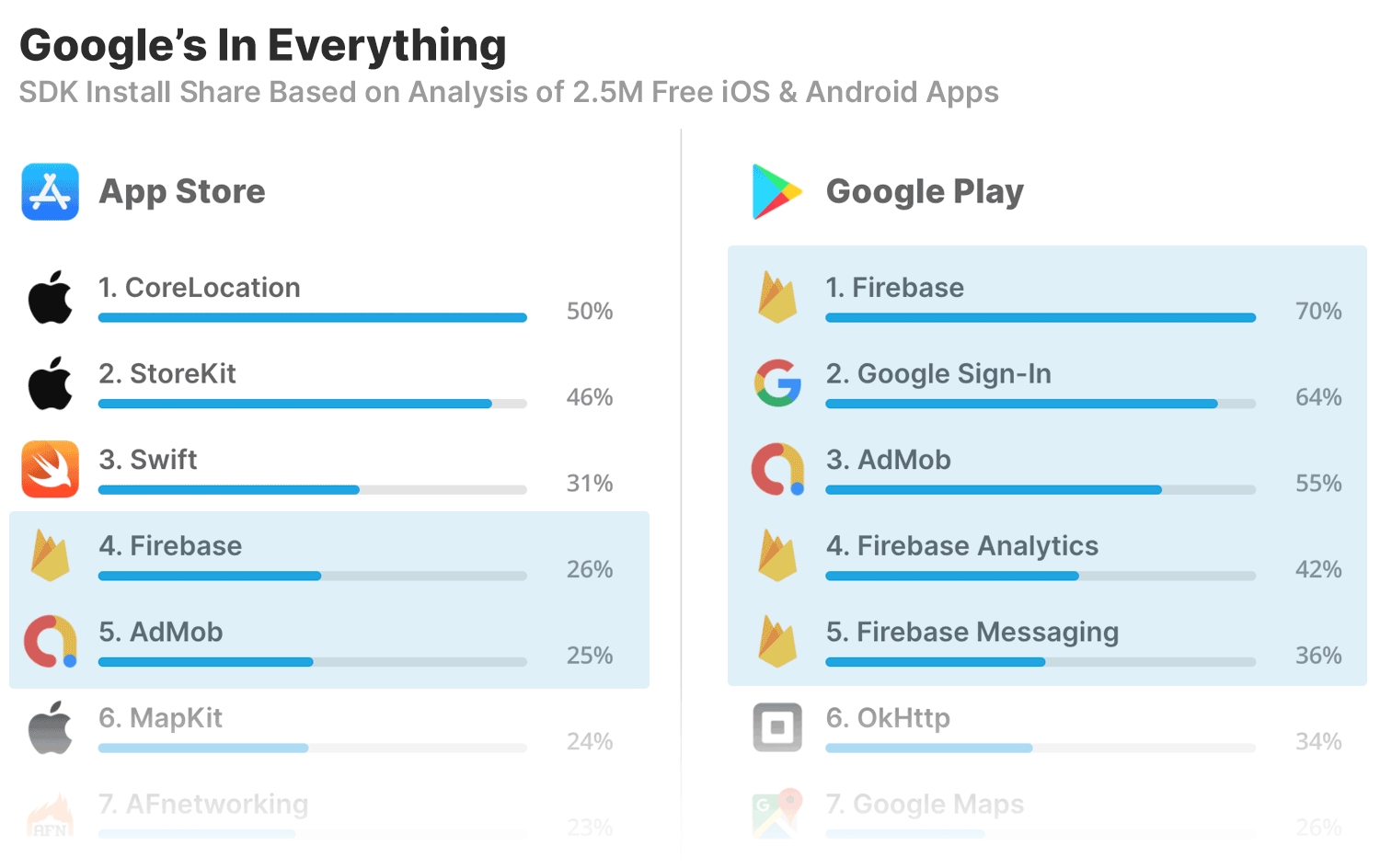 Wonder Woman 1984 is coming out in just a few hours, and for the first time, it'll be coming out in theatres and on HBO Max's streaming service at the same time. And, unlike Disney+, HBO won't be charging subscribers anything extra for the early access. I'm pretty excited about this!

This is a big bet for HBO, which rebranded its steaming offering NOW into Max a few months ago, with fairly obvious success. However, HBO Max, massive catalog and all, is still the underdog of streaming.

Will Wonder Woman be the answer? 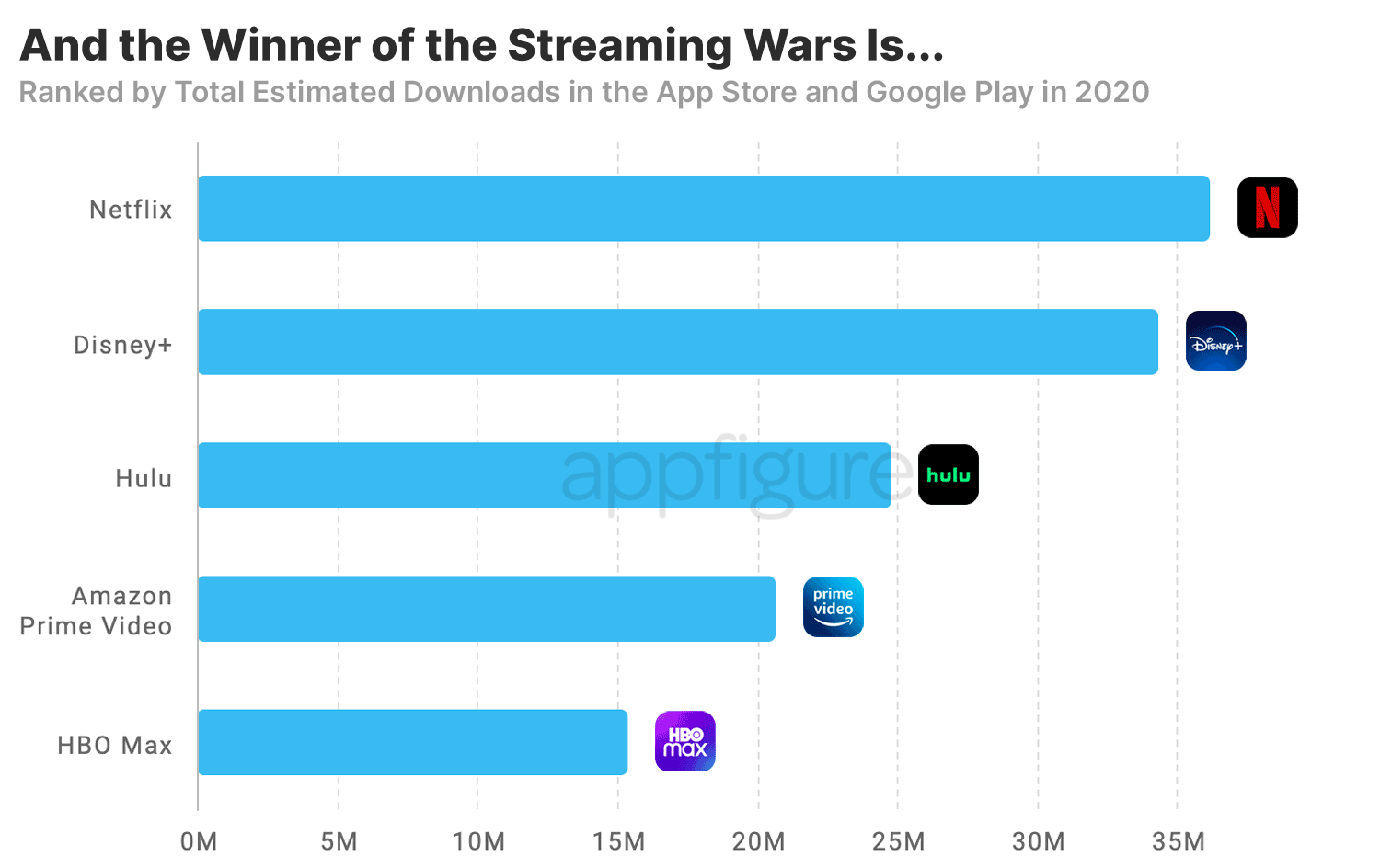