What a week for Apple news! Apple delivered new hardware, podcast subscriptions, and... the end of days for advertisers. Kind of.

Tim Cook announced this week that iOS 14.5 will be dropping in a few days. In case you're not sure why that's significant, iOS 14.5 is the first version of iOS that will require apps to use App Tracking Transparency.

Last year Apple announced that developers who share user data or combine it with other non-app data will have to first ask the user for permission to do that. I can't imagine many people will tap the "yes, please" button.

On the surface, this is a "simple" change that falls in line with everything else Apple is doing to protect users' privacy, but for developers, this change has serious implications: 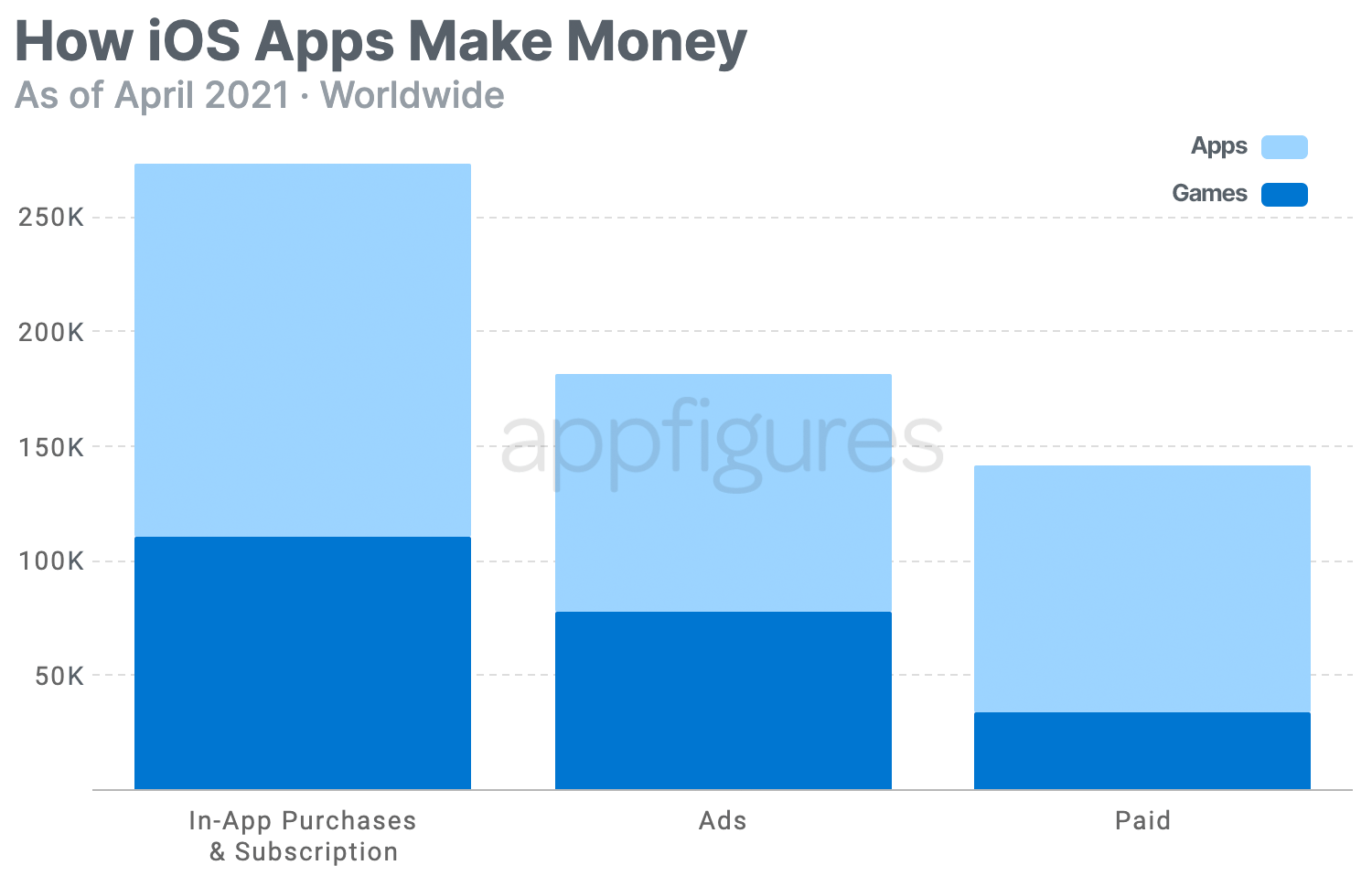 The bottom line - Apple's desire for privacy will cost many honest developers a lot of money. Games will suffer the most, and will likely result in even more decent games dying and ad-network owned hyper-casuals continuing to rise. Overall, I see that as a lose-lose.

HBO Max has been cranking out a lot of original content, most hitting TVs and theaters at the same time, which isn't how this was done before. Why does HBO Max continue to do it? Because it works!

Since rebranding as Max, HBO's app revenue has grown at a rapid pace, and with every big title, added a significant number of paying subscribers. 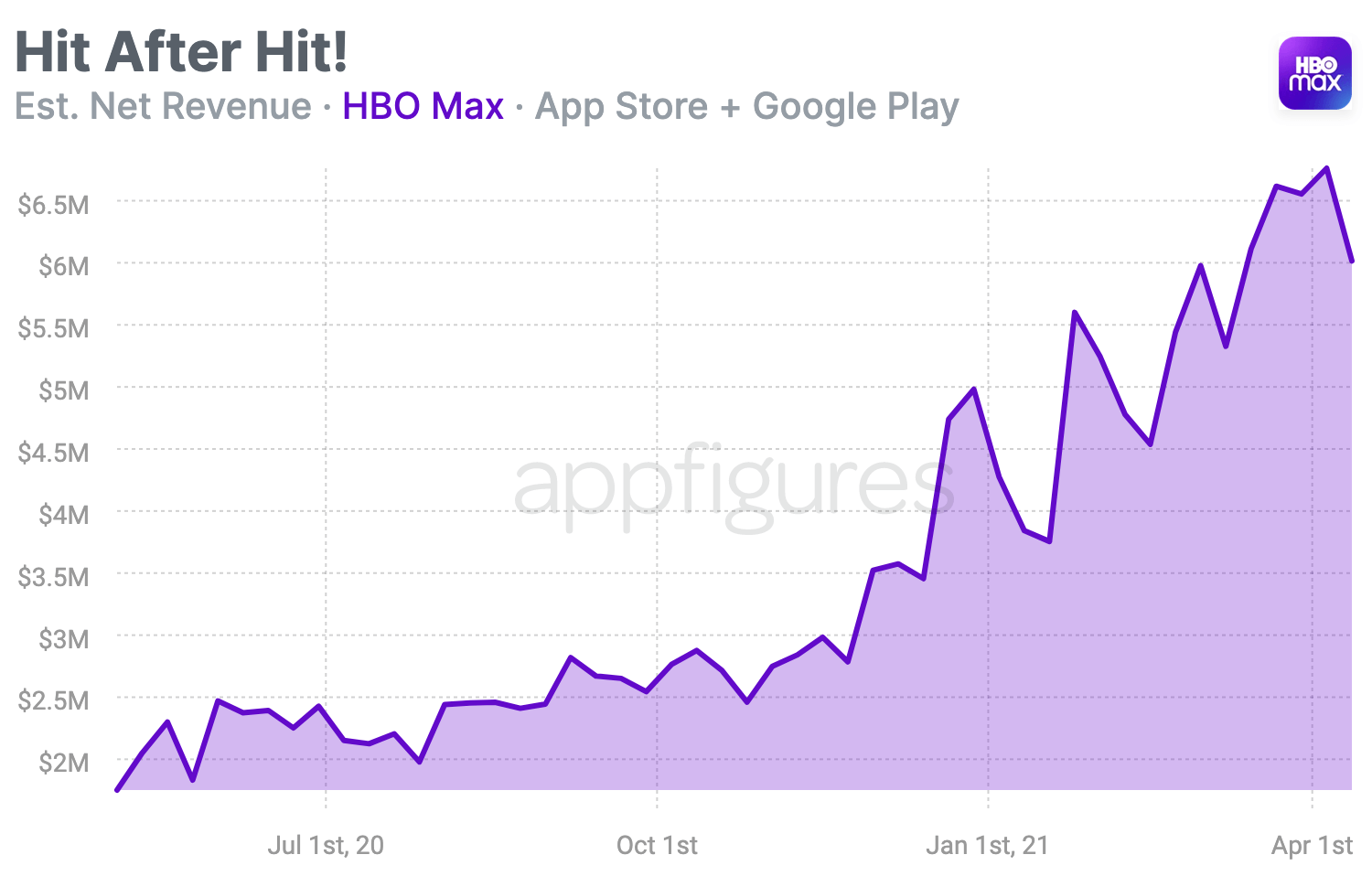 We can see that clearly if we look at revenue estimates, starting with the first big release, Wonder Woman 1984, back in December, which was followed by a new Tom & Jerry, the Snyder cut of Justice League, and Godzilla vs. Kong right after to end the month of March.

These have pushed HBO Max's monthly revenue to an all-new high with $26.7M of net revenue ($38.2M gross), according to our estimates. That's 30% growth from February and 116% growth when compared to November, before the first big release.

Mortal Kombat drops this weekend, a title I've been waiting for myself, and in the coming months, a new Space Jam and a fourth installment of the Matrix are going to be released, so this trend isn't likely to change.

Snapchat mentioned earlier this week that they're seeing big growth on Android, so I took a closer look at the data to see what that's all about and to verify their statements.

And verified they are!

Since 2017, the ratio of downloads from iOS devices to Android devices has grown drastically. 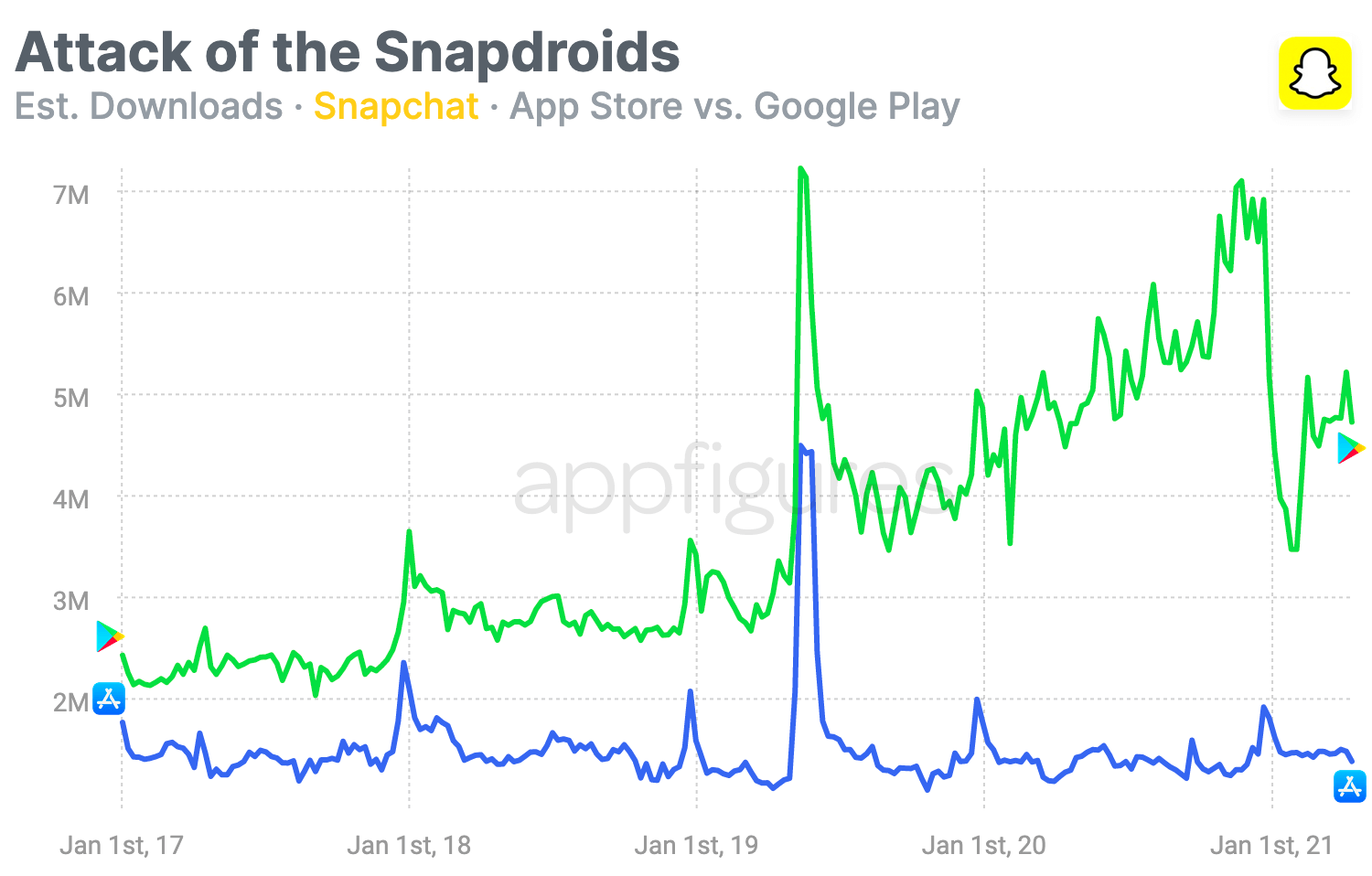 In the social media world, a ~2x ratio is pretty standard. Twitter, Instagram, and TikTok are all in that range. That means that for every download on an iOS device, there are two downloads on an Android device. This is pretty standard because Android is much more common outside of the US, and all of these services are popular enough that there's a lot of demand for them in most countries.

Why is this important? Snapchat might be chasing Instagram and TikTok, but has it's own fanclub that's very large but up until a few years ago was mainly made up of iPhone users. For Snapchat to grow, they have to stick in other countries, and Android downloads are a great proxy for how well that's going.

Last week Coinbase dominated the top charts because of its IPO and sharp increases in cryptos. But while that was happening, another cryptocurrency trading app rose as well. 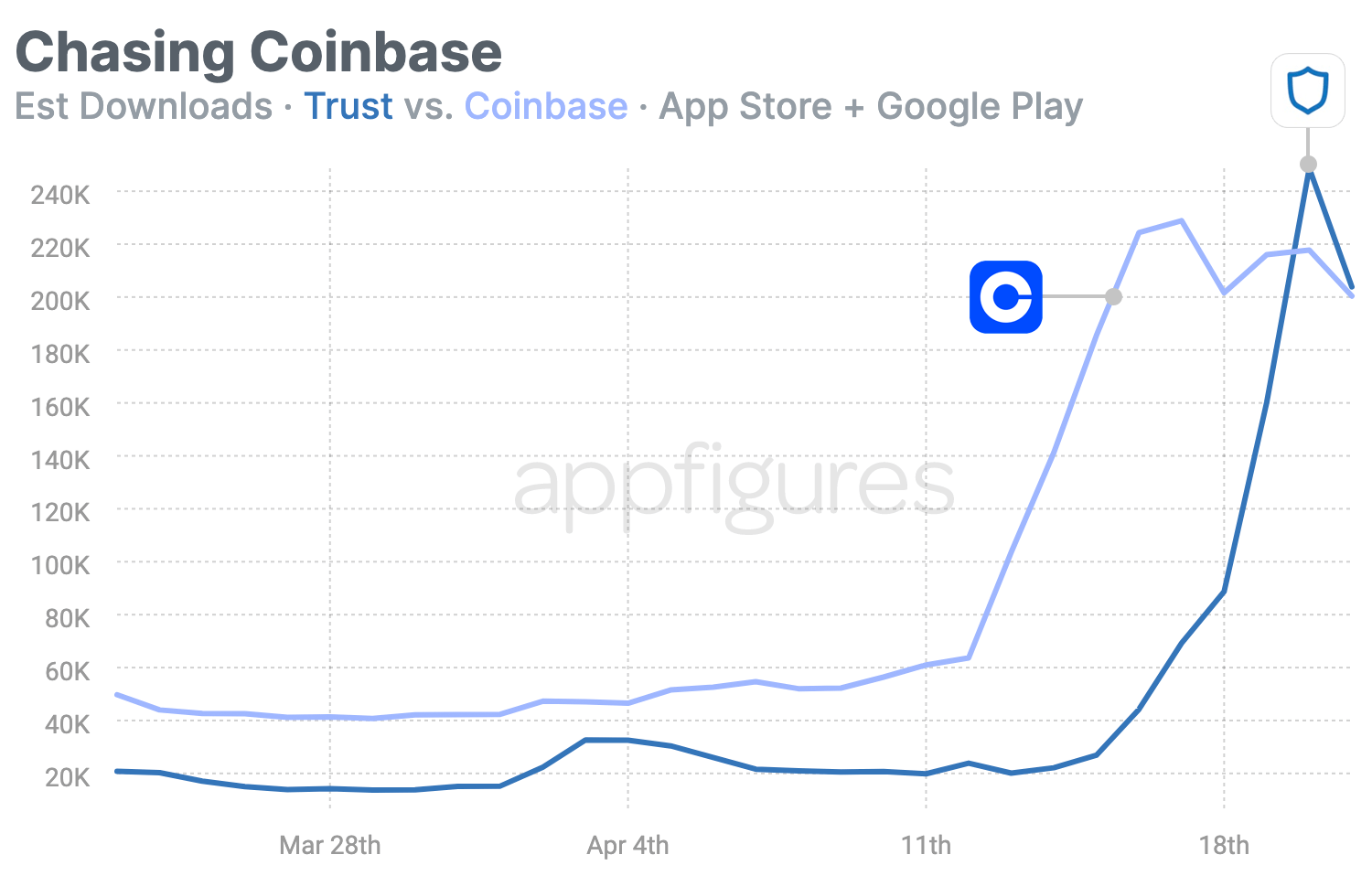 Trust, a cryptocurrency wallet and trading app with a name that makes me suspicious, climbed to almost the top of the charts on both the App Store and Google Play this week.

That climb translated to quite a few downloads.

Our estimates show that downloads grew by a factor of 10, from a daily average of around 20K to more than 240K on Tuesday, across both platforms. For context, Coinbase had 200K downloads on those days.

The bottom line - More downloads of crypto wallets mean cryptocurrency is breaking into the mainstream like never before, and that has some serious implications for how we'll trade in the future. Although China is rolling out its own digital currency, most crypto isn't backed by anything serious. Yet, that hasn't stopped companies like Tesla from starting to accept it as payment for goods.

Governments won't sit by idly while this is happening, so expect serious regulations to come, and since the whole idea of cryptocurrency is to be free of those, what it is in a year could be drastically different than what it is now.

Do you use the built-in browser on your phone? I do, but looking at downloads, many millions of iOS and Android users don't. So what do they use instead? 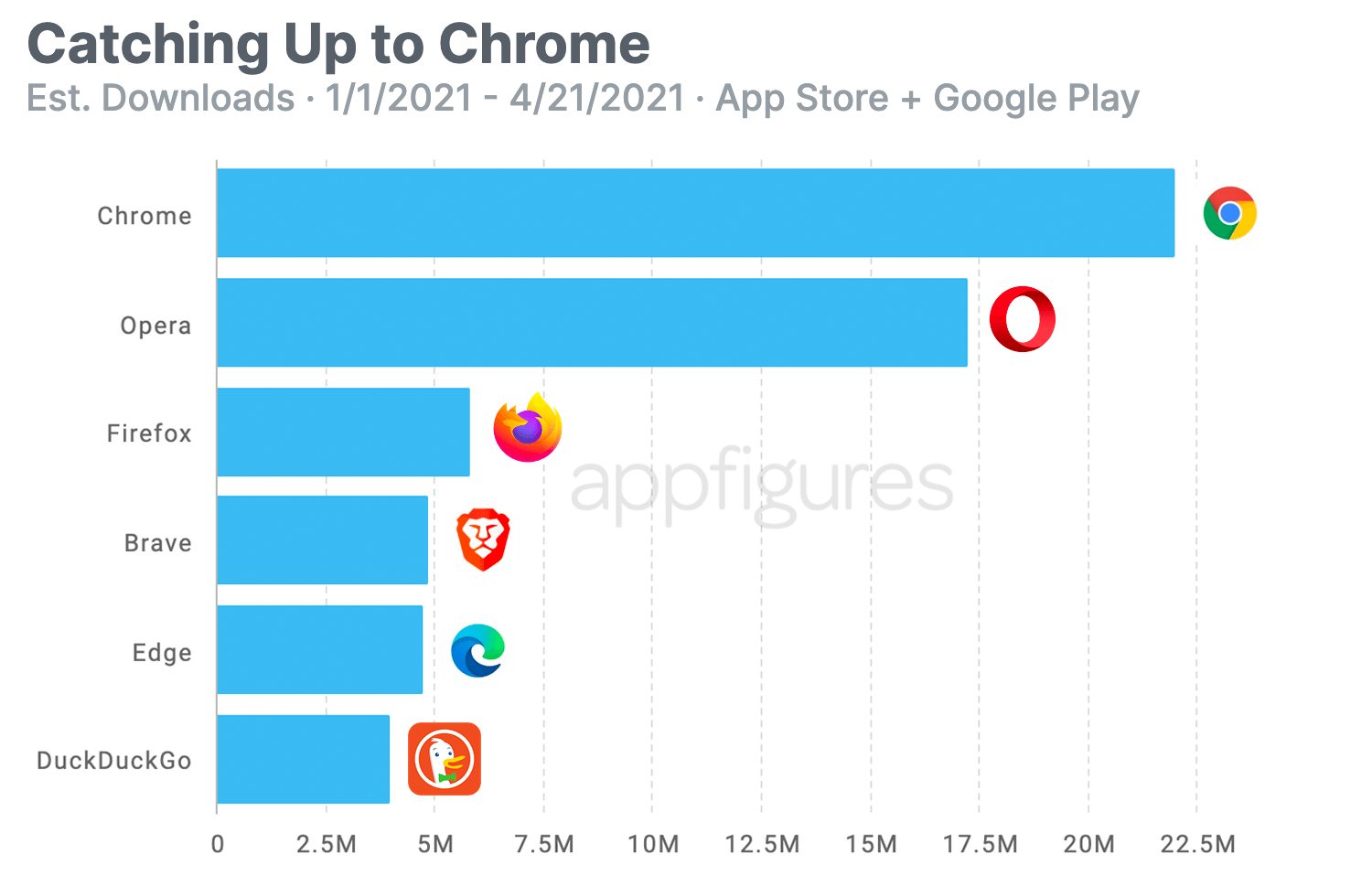 A look at our estimates is showing very different behavior on the two platforms.

Chrome, which is the most popular desktop browser these days, is also the most downloaded browser on mobile. This year it earned 22M downloads, 91% of which came from iOS devices. Androids get Chrome pre-installed, so that's not a surprise.

Although Chrome has the lead, it's got stiff competition. Opera is right behind it, with 17.2M estimated downloads, the majority of which, on Android. Firefox, Edge, Brave, and DuckDuckGo saw 19M downloads this year, with a fairly even distribution between them all.

What's your favorite browser? Why? Let me know on Twitter.

This week's roundup covers different, yet important, sides of the mobile industry. From UA by ice cream to Twitter vs. Andreesen.

ATT is here and it's already changing how apps behave. Plus the Airbnb competitor you probably didn't know about.