1. A year of Streaming for Peacock

Peacock, NBC's streaming app, is about to celebrate its first birthday, which means I won't be able to call it "new" anymore. We looked at HBO Max recently after it shed the "new" label, so as is now becoming customary, here's a look at how much Peacock managed to achieve in a year. 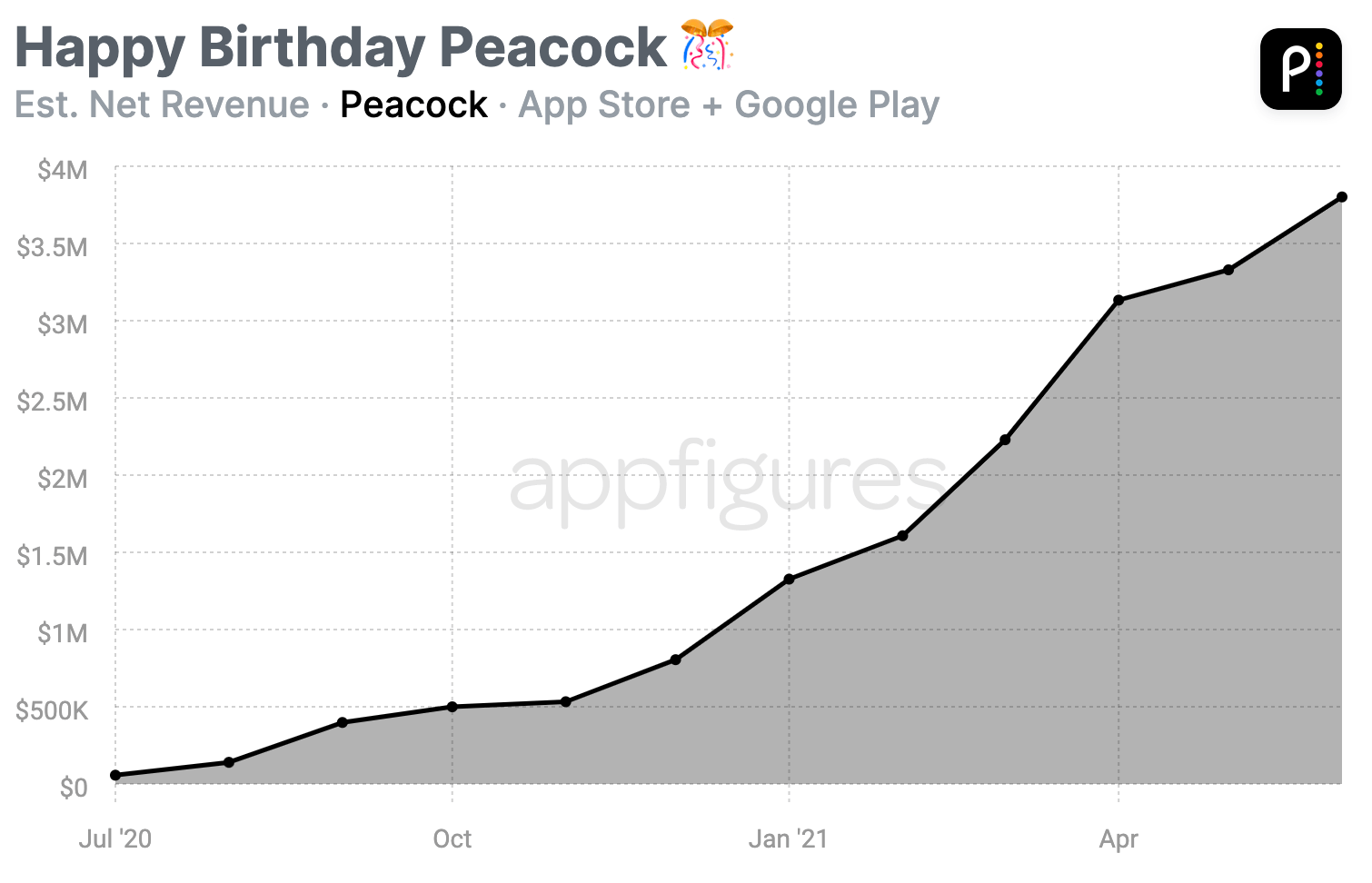 Downloads are a good metric to proxy demand, but with NBC's reach, they're not that hard to acquire. The real proxy for demand, in my book at least, is revenue.

I looked at Peacock recently as it ended May with the most revenue in a single month so far, but I have good news for those rooting for the flightless bird. Peacock ended June with even more revenue and stronger month-over-month growth.

We estimate that since its rollout, Peacock earned $18M in net revenue (or $25M before paying Apple and Google their fees). Not a bad haul for a brand new app from a TV channel.

Much of its growth started around February of this year and, much like HBO Max and Disney, is driven by exclusives.

What's next? Exclusive hits are the name of the game. This isn't very different than the old world of cable, but the main difference is that switching between apps isn't as easy as switching between channels. That's why we're seeing more focus on a small number of apps.

To continue growing, companies like NBC have to evolve how they look at content. HBO Max already did that, and the results are pretty good. For context, HBO Max brought in $51M of net revenue in June, according to our estimates. That's double Peacock's entire existence.

I know I'm comparing TV with movies, but now that HBO Max is streaming new releases, the line is blurring quickly.

I've analyzed Clubhouse more than once in the last year, but I mainly focused on downloads. Thanks to the launch of the Android app, those have gone up by a factor of 15 when compared to April.

But as I analyzed this latest trend, something else popped out that I wasn't really expecting. 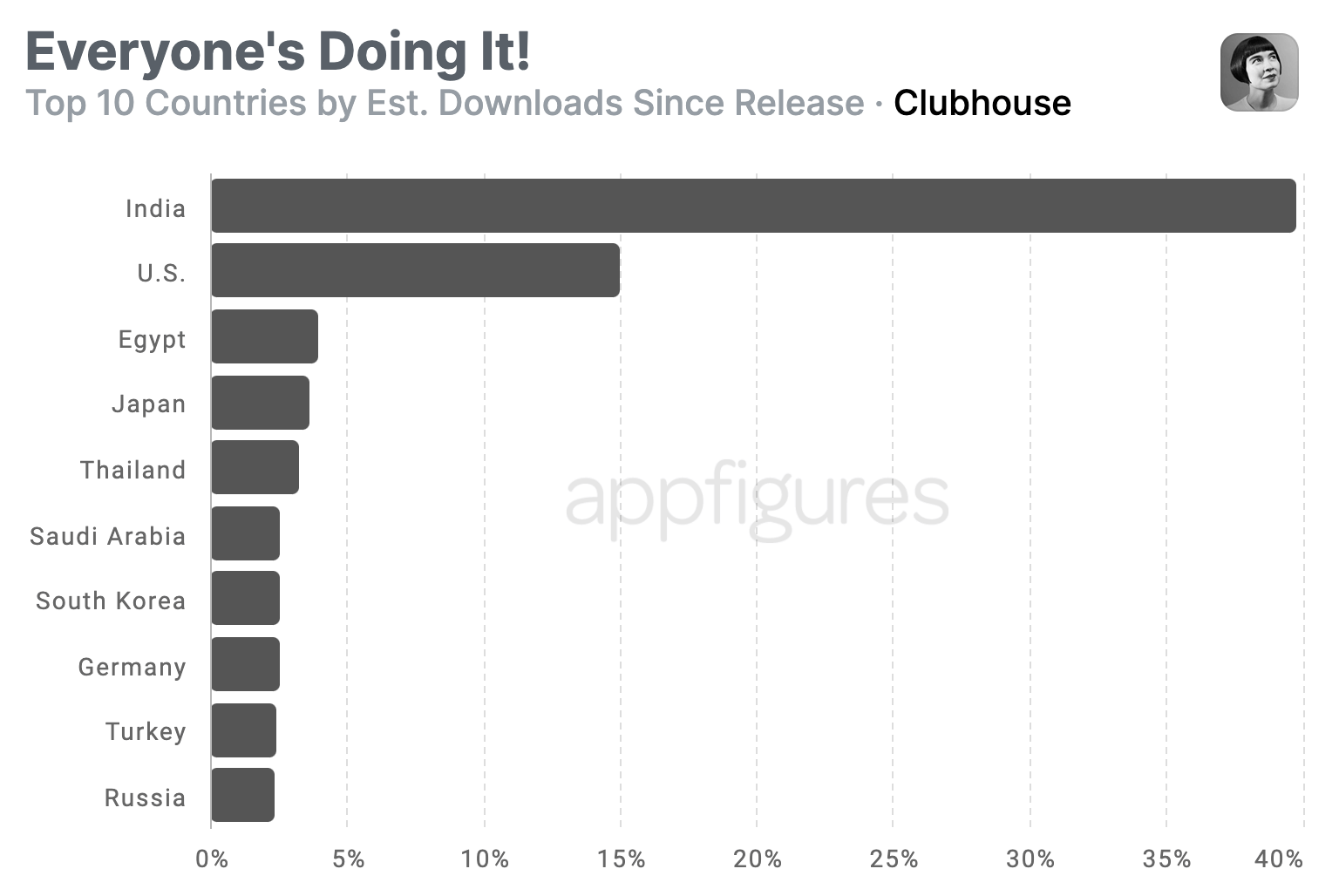 Based on our estimates, one country is responsible for about 40% of the nearly 30M downloads Clubhouse has seen since launch. That country isn't the U.S.

That country is India.

Now that Clubhouse is on Android, that's kind of expected for Google Play. But, India is also the country with the most downloads for the iOS app, edging out the U.S. by nearly 2M downloads.

It is interesting to see how audio-only propagated across languages and countries. I initially dismissed it as being harder to connect people across languages and countries but what I didn't think about is that groups can form around a single language more easily than they can on Twitter, where there's more pressure to use English because of how many people will see it.

Crypto is in the news a lot, again. This time it's not a weird currency that's taking the store by fire but rather regulators trying to prevent that from happening.

Earlier this week, regulators in the U.K. announced that Binance, a popular crypto trading app, is now banned in the U.K. This is another action in a string of moves that U.K.'s Financial Conduct Authority has taken against crypto trading platforms.

I've looked at Coinbase, another popular crypto trading platform, a whole bunch of times before but not at Binance so much, so let's do that: 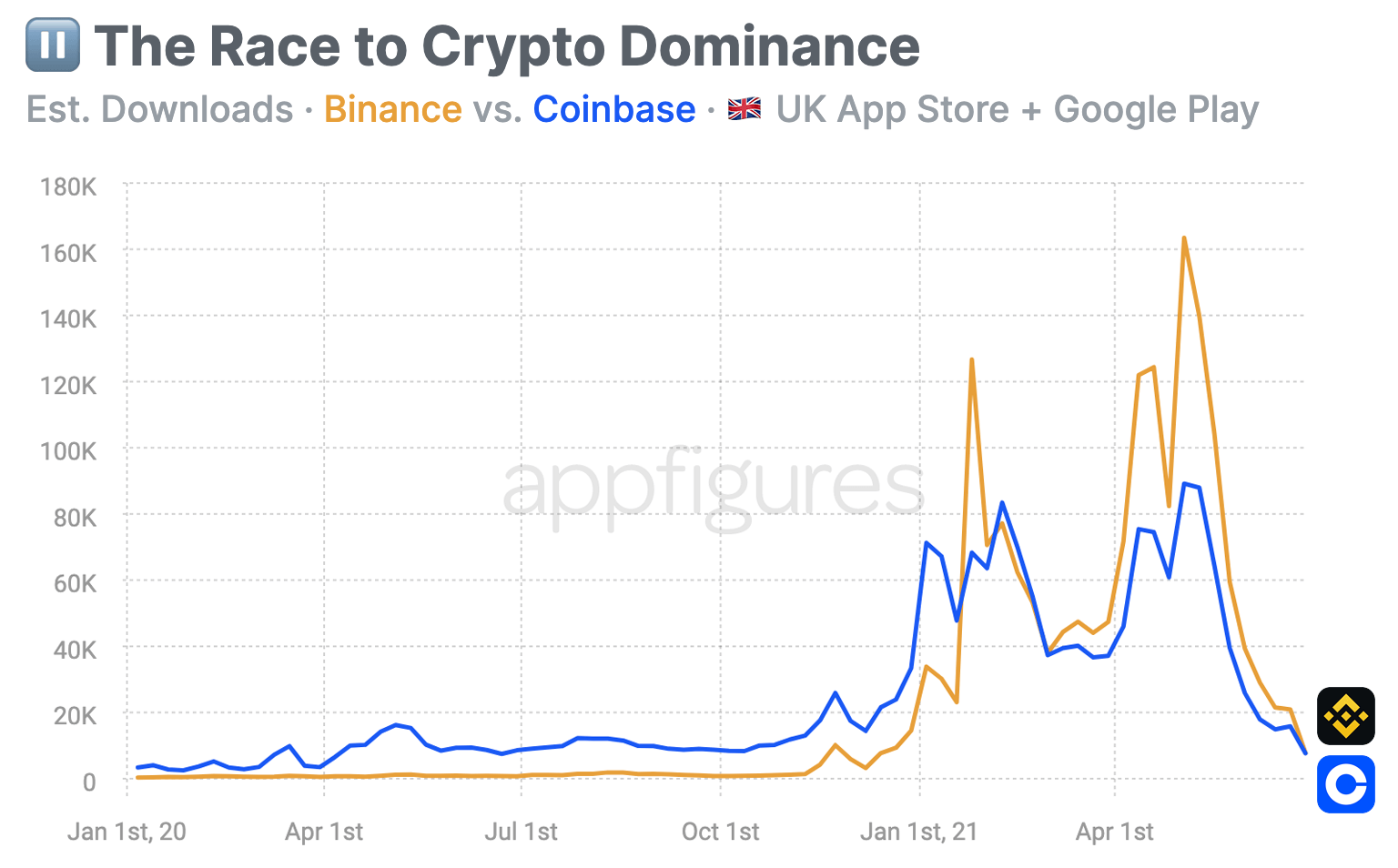 Since the beginning of 2020, Binance was downloaded 1.78M times, with downloads split almost evenly between the App Store and Google Play according to our app intelligence. Rival Coinbase, by comparison, was downloaded 1.88M times, edging Binance out by about 100K downloads over two years.

If you're curious about why the FCA is making its moves now, look no further than the trend of downloads of both crypto exchanges. The two were not very popular for much of 2020, but as Bitcoin started spiking, things got more intense and both kicked off 2021 with a massive increase in demand.

FYI - If you've searched for Binance before, you know there are a few apps that carry the name and logo, but they aren't all the same. That's why the chart focuses on the U.K.

So what? Cryptocurrencies entered the mainstream just recently, and their popularity as an investment opportunity for mere mortals has been skyrocketing. This move attempts to curb this excitement by forcing the mere mortals to acknowledge that it's speculative and unpredictable. In other words, it's not necessarily a good place to invest your hard-earned money.

I think it's hard to just say not to this trend, so I expect we'll hear more about this in the very near future, and what comes out of it could be critical to the evolution of crypto as a real currency.

There's a new Parler in town, and it's called Gettr. The app, which builds on the promise of free and open speech, launched a few weeks ago but was officially announced yesterday.

In those few hours it's been gaining a lot of momentum in the U.S. App Store, where it's now ranked 3rd in the Social Media category and 12th overall. 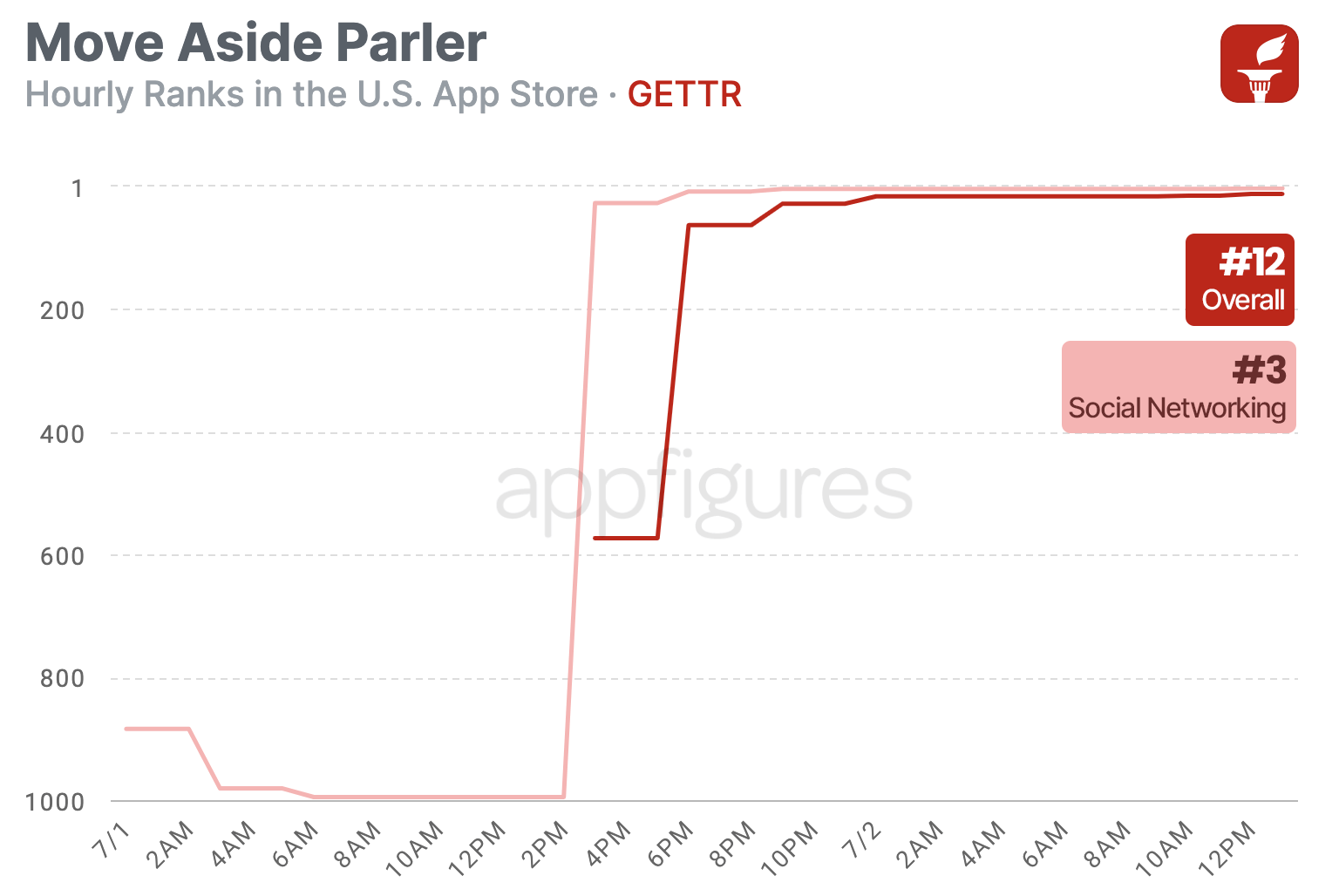 It's hard to tell if Getrr will see the kind of downloads Parler saw before it was pulled (a lot) or after (not a lot), but given the current trend, I expect it'll be on a few million devices within the next few weeks.

Why is this interesting? Well... for a few reasons. Normally I try to analyze the viability of apps for long-term potential by looking at how they intend to monetize. Every popular social network fought with that for a while, and for the most part, they all settled on ads. But... is Gettr a business venture or an outlet that's capitalizing on a current political trend?

When you have companies that compete in the same field for the same user engagement and have entirely different incentives, things could get interesting.

It'll also be interesting to see how Apple and Google handle Gettr's free speech commitment. It's too early to tell, but if it gets sticky enough, this could get interesting as well.

5. It's time to move around the cabin

Vaccines + summer = travel. Let's end the week on a high note by looking at the continuing unlockdown.

To get an idea of how many more people are traveling, I compared downloads of the top airline apps so far in 2021 vs. the first half of 2020. The results are almost ad I'd expected. 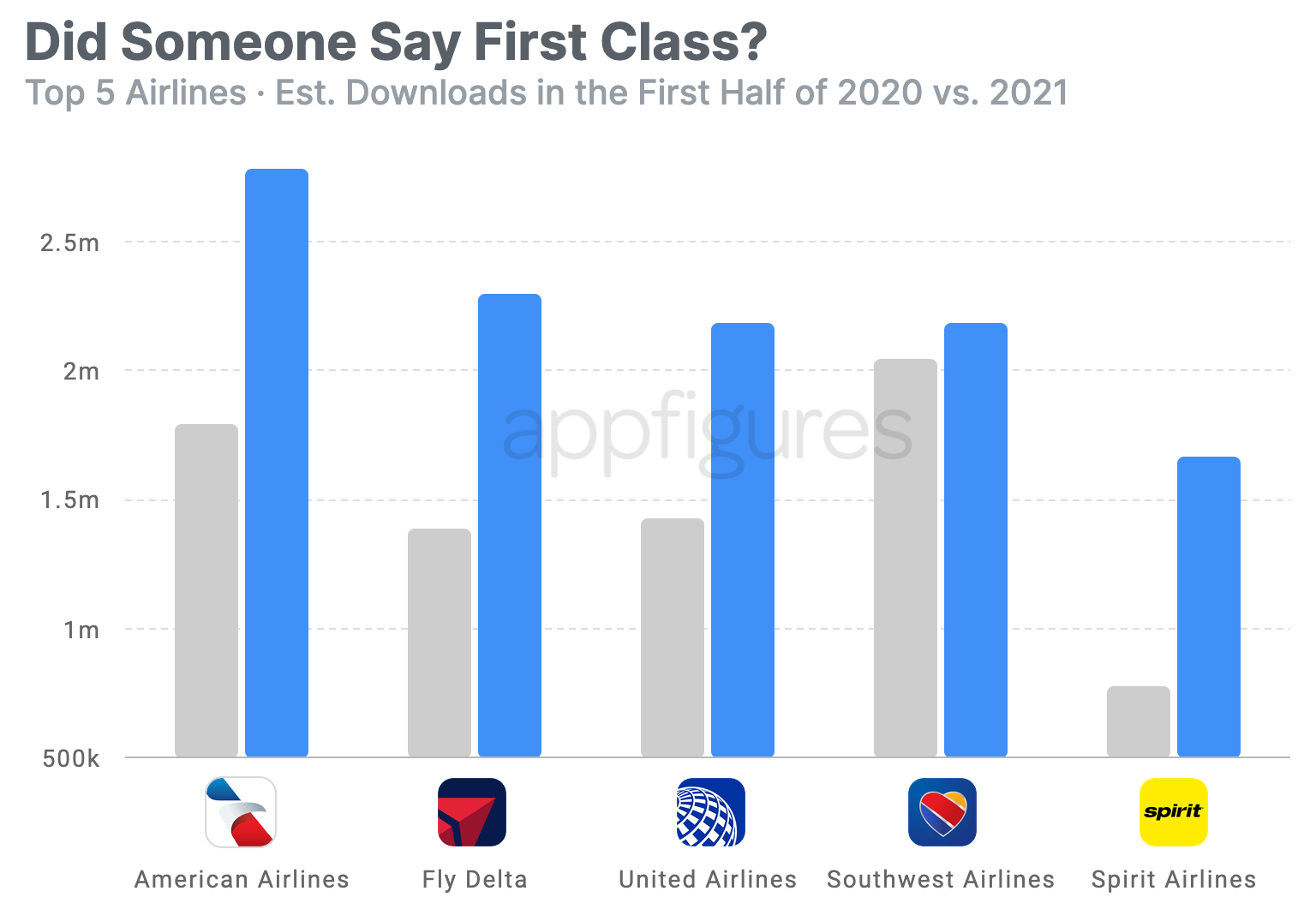 The most downloaded airline apps in the U.S., by downloads and in order are American, Delta, United, Southwest, and Spirit.

Who's winning? This is a great growth rate for an industry that's been choking for so long, but what's interesting here is who saw the most growth.

Downloads of Spirit Airlines, the lowest-ranked app, rose by 110% year over year. That's the most out of this group, which averaged 50% growth. All except for Southwest Airlines which saw a modest 6% growth.

Regardless of growth rate, the trend is going up. It's not at 2019 levels, where our estimates show this same group saw a little over 13M downloads, but it's considerably closer. Given how things are trending so far, I expect the second half of 2021 to look much closer to 2019 levels.