This Week in Apps #79 - Just Like a Game of Quidditch!

Harry Potter: Magic Awakening launched in China last week and took command of the App Store's Top Grossing chart very quickly and for quite a while, a feat usually reserved for Tencent and no one else.

Given the almost universal popularity of Harry Potter, I don't find this surprising, and with a really well-thought-out marketing campaign by NetEase, the company behind the title, this success makes a lot of sense. 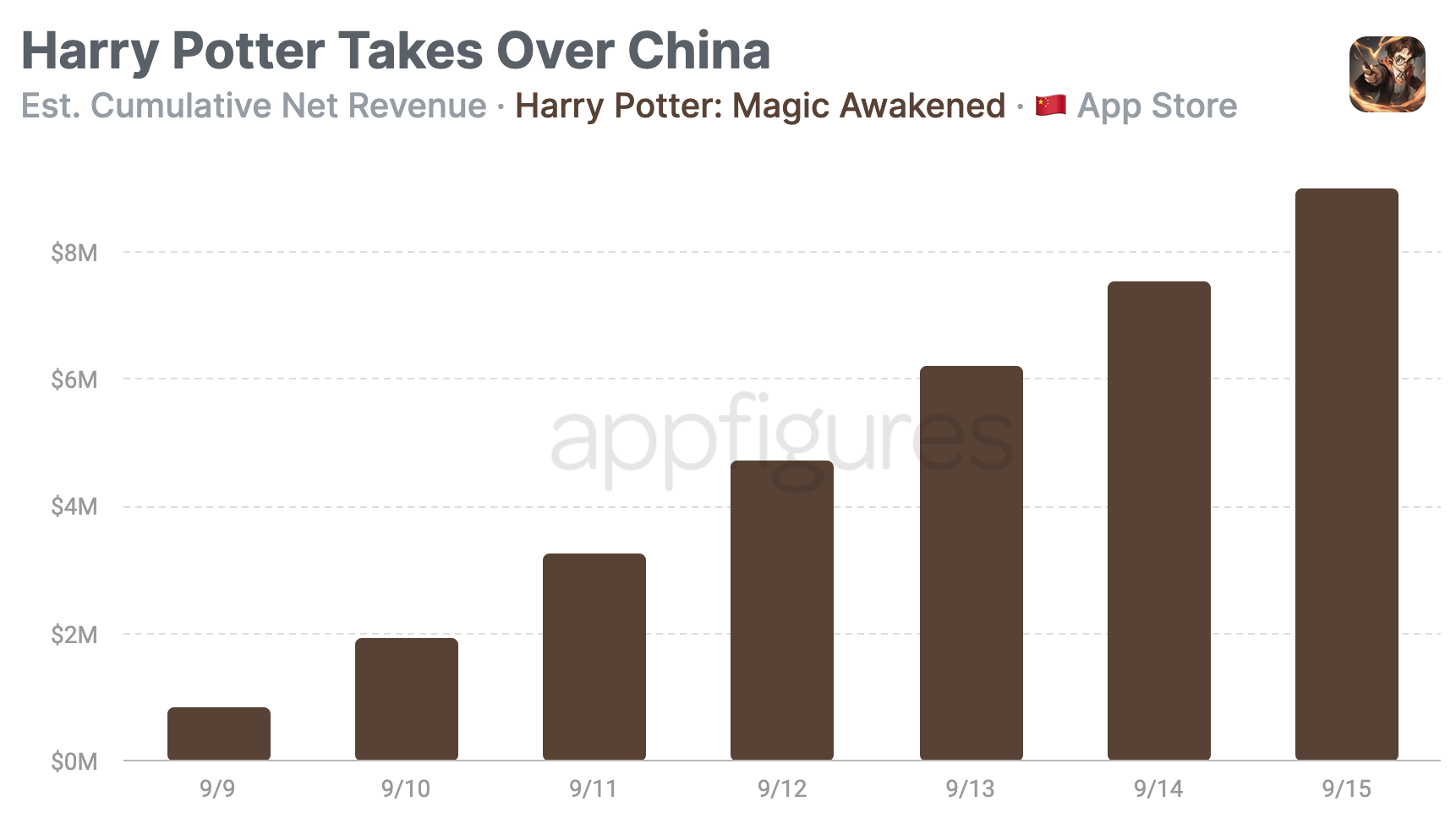 In its first week in the Chinese App Store, Harry Potter brought in $9M of net revenue for NetEase and Warner Bros. and around $3.8M in fees for Apple, according to our App Intelligence. The success was a result of the brand, of course, but also the hype NetEase built around the title's launch. Luckily for them, Harry Potter made that easy. The title used pre-registrations to get momentum, which included a letter from Hogwarts and a sorting ceremony a couple of days prior to the launch.

Downloads and revenue reflected the excitement. Our estimates show that the game added an average of 100K new users and around $1.2M in net revenue every day in its first week.

China's App Store has become a new gold mine for international developers as the culture opens up to western content. Right now, it's less likely to see non-Chinese content in the store, but that's quickly changing. We saw that with the launch of Louis Vuitton's game earlier this summer, and we're likely to see it again when NetEase launches Lord of the Rings next week.

What about kids? China's limitations on game time is definitely going to put a thorn in this launch, as well as those of any other titles to come. But... This title is likely attractive to kids and adults, possibly more adults at this point, given when the books were released, so this may not be bad news. Plus, it is what it is, so this is more of a "good to know" performance that will set the bar for future releases.

2. Paramount+ Is Still In the Streaming Race

Remember Paramount+, originally CBS Interactive, which rebranded back in March? Well, it's still in the streaming race, and its trend is still very positive. In fact, it's starting to see the big guys. 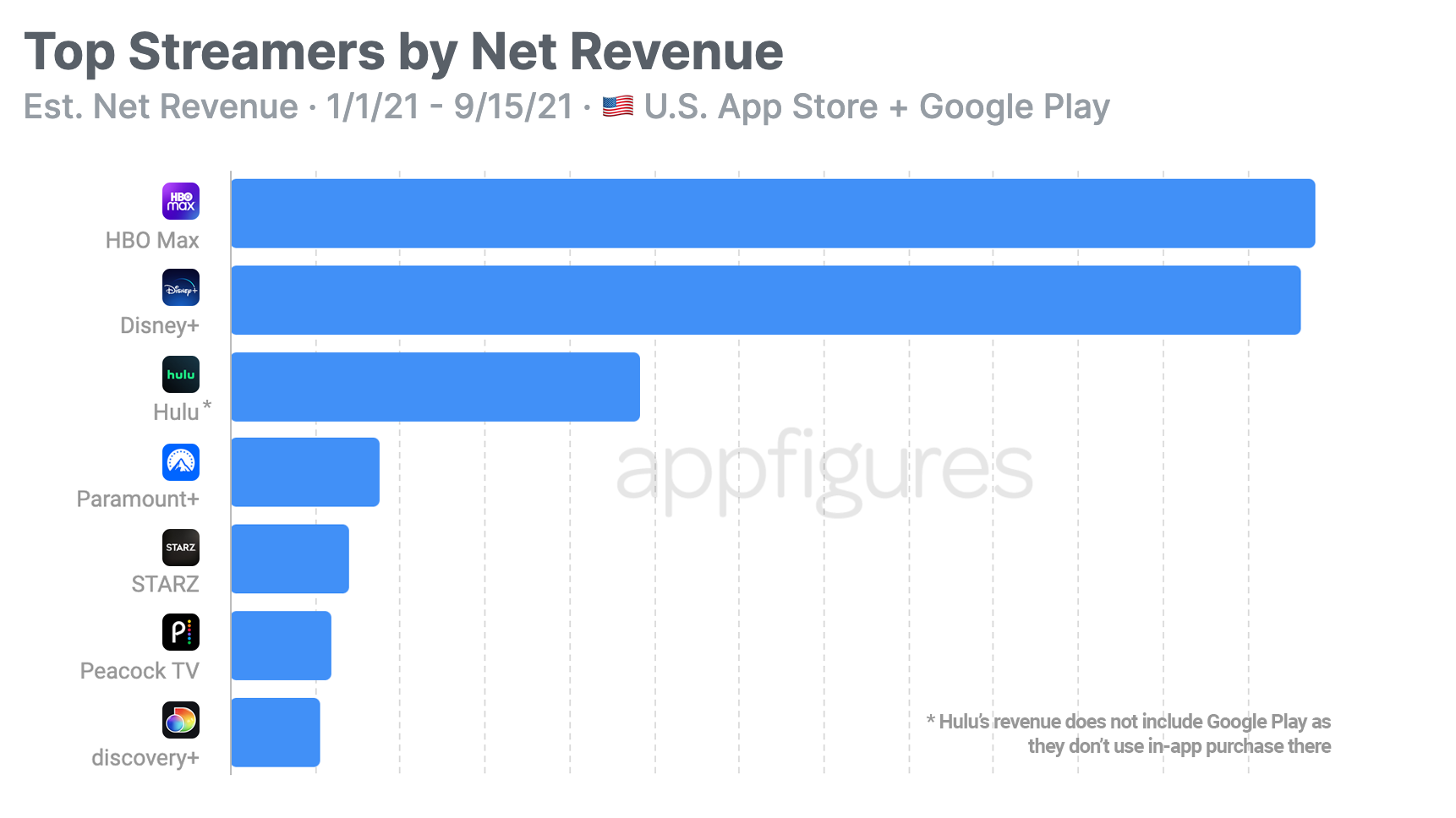 Do you see the pattern here? What differentiates Disney and HBO from the rest? Original content, which is really the name of the game for streams at this point. If you've been reading the newsletter for a while, you've heard me say that more than once.

Paramount, however, is not a newbie in the space of original content, which is why we see it growing. Paramount+ is the latest entrant to this group, and unlike discovery+, it's got the ability to put up a good fight.

That's why its revenue has been soaring since it rebranded in march. 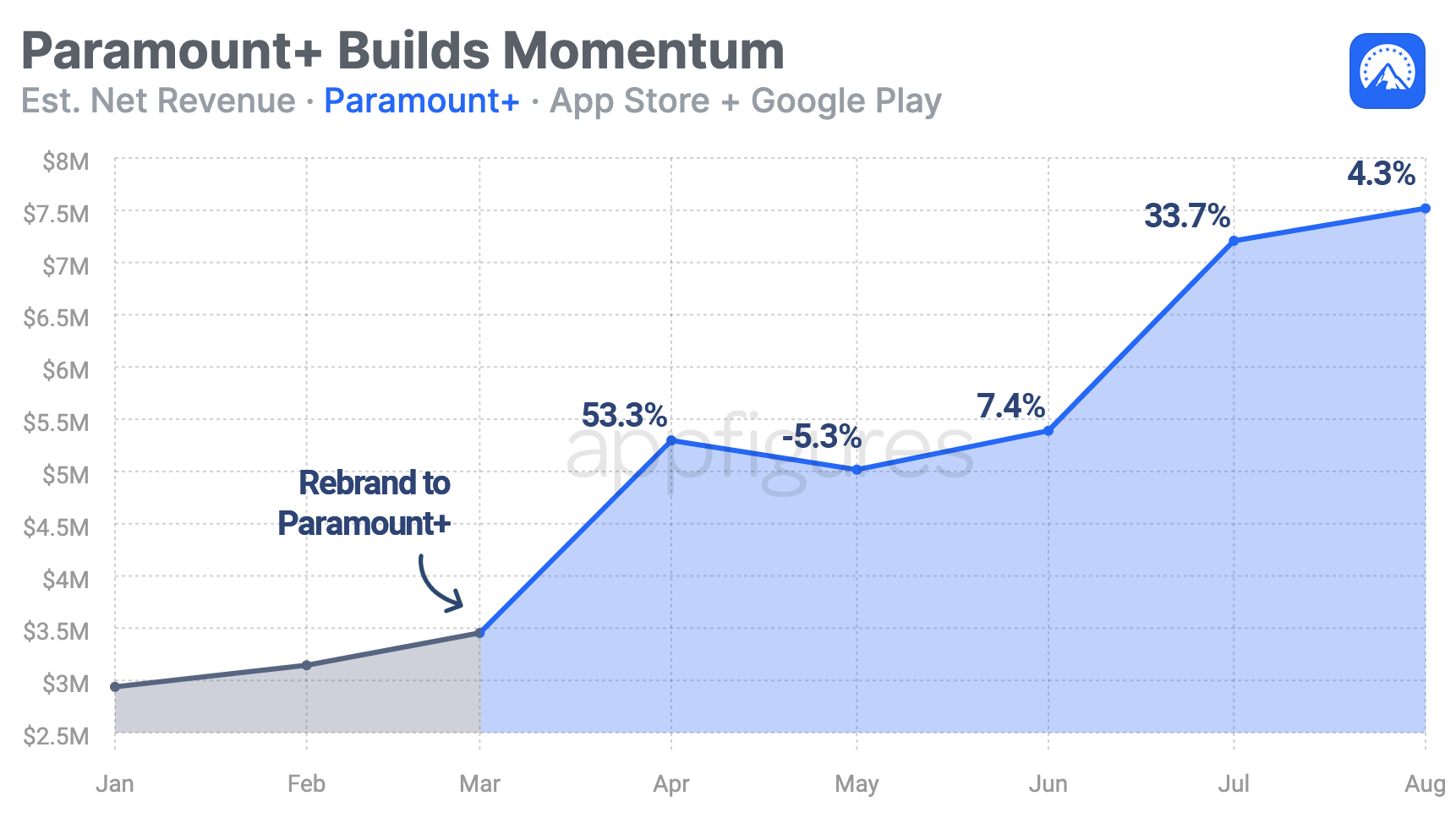 Month over month growth has been positive 4 of the five months it's been available under its new name, and one of those months saw a 33.7% growth. Not bad!

According to our estimates, August saw the most revenue in a single month for the streamer, earning $7.5M in net revenue (that's after they give Apple and Google their fees), a 4.3% increase over July's haul.

I expect the numbers for September to be even higher because of the release of Paw Patrol at the end of August. While the movie targets kids (aka parents), it's the kind of content that's necessary and competes with Disney directly.

Content is king. As cable continues to move to apps, I expect to see streamers fighting over market share fiercely. The list of streamers fighting isn't long, but it's busy enough that for viewers, this means both loads of content but also a mess of apps and subscriptions...

Let's see what kind of spin the new rules regarding 3rd party payments add to this race.

Audio-first social network Clubhouse celebrated its first birthday last week. What a ride it's been for the new concept that went viral for a hot minute and raised more money than makes sense. 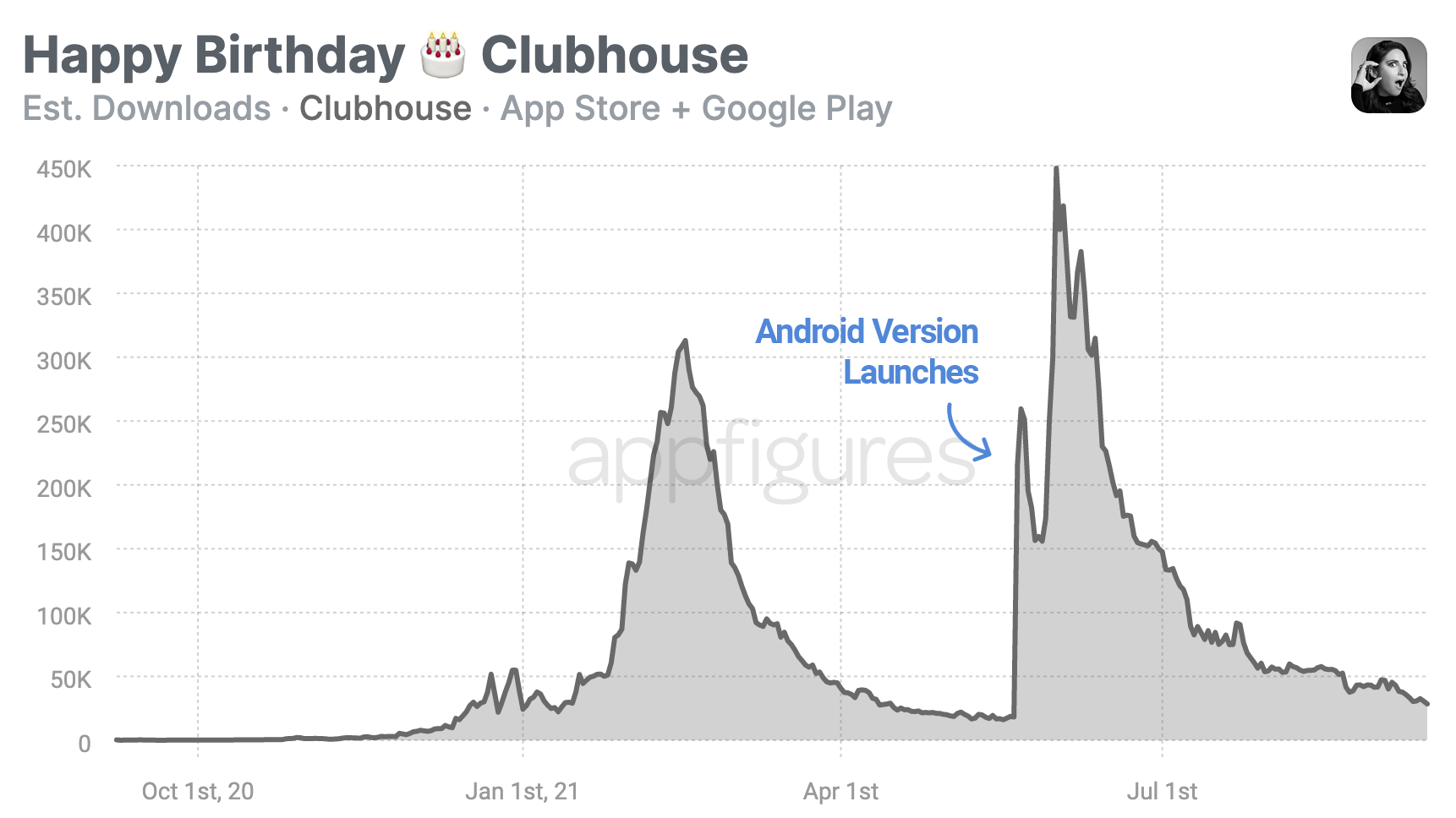 If you've been following Clubhouse's journey, on this newsletter you probably know of its ups and downs. If not, you can see from the chart above that things aren't looking all that great now that the platform is a year old and looks and feels pretty much the same as when it started...

So, what went wrong? Everything and nothing all at the same time! The concept of audio-only social media is novel but also strange. Most people I know would prefer writing to talking to random strangers. Throw different languages, not being available on Android, and invite-only access, and what you're doing is more of an experiment than a company.

That's what happened for the first few months. Clubhouse garnered 818K downloads in 2020, most of which came in December as the experiment started to go viral. Downloads ballooned in February, giving the team the excitement it needs to raise way too much money while not really improving the platform.

That peak died off very quickly, and with it, the excitement about the app that was still not available for Android devices. At the same time, incumbent social media platforms started teasing their own versions of audio-only communications. 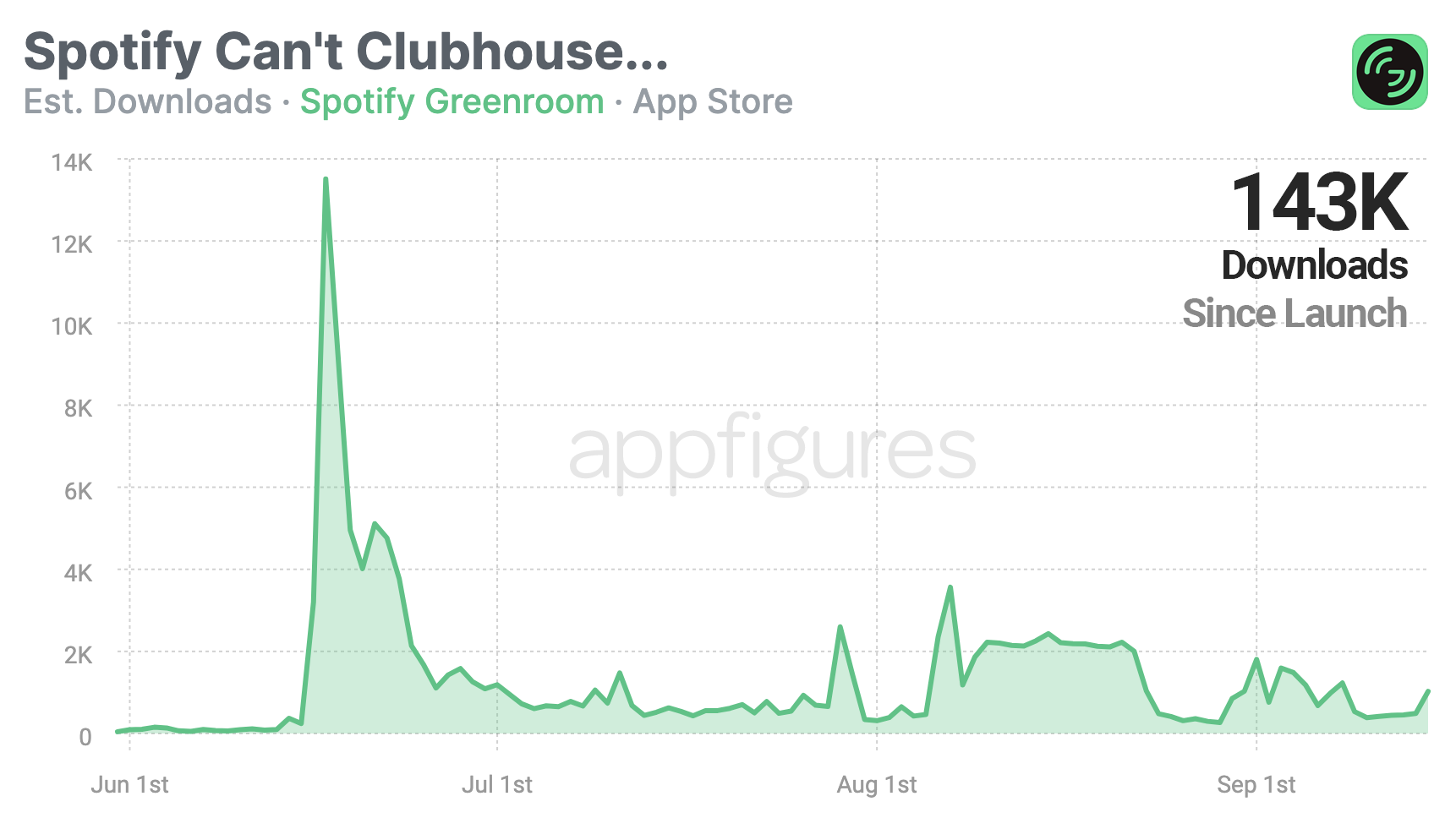 Twitter released Spaces in May, around the same time Clubhouse finally landed on Android, followed by Greenroom from Spotify. The green giant didn't even get close, adding a meager 143K users, according to our intelligence.

If you remember the days of early Twitter, where influencers were starting to grow, this is pretty much it but with a more massive audience, which is why Clubhouse managed to get traction to begin with. I think most users aren't interested in speaking but rather listening, making Clubhouse more of a live radio show than a communication platform.

It's not unlike what we see on Twitter now and Instagram, but much more extreme since speaking requires more effort than writing or snapping pictures. In a way, Clubhouse isn't even competing with Twitter or those other social media platforms but rather YouTube.

But that's also the only way it could succeed if there's a future for it. YouTube rewards creators for their content with ad revenue, something most other platforms don't. Twitch and TikTok let users pay creators, which is nice but not the same. Twitter's new Super Follows let users subscribe to creators, which is even less good.

With a user-base totaling 27.3M worldwide, Clubhouse isn't necessarily a winner but also not a total loser. If they follow the YouTube model and just reward creators automatically, they have a chance.

They'd have to build a successful ad platform first, but that's a whole other thing...

4. Showing Off Your Vaccination Status

New York has been at the forefront of covid since the beginning. It's continuing to do that with its vaccine passport, Excelsior (who named this???) which has seen downloads in the double-digit thousands for all of August.

But it's not the only app that's in demand. 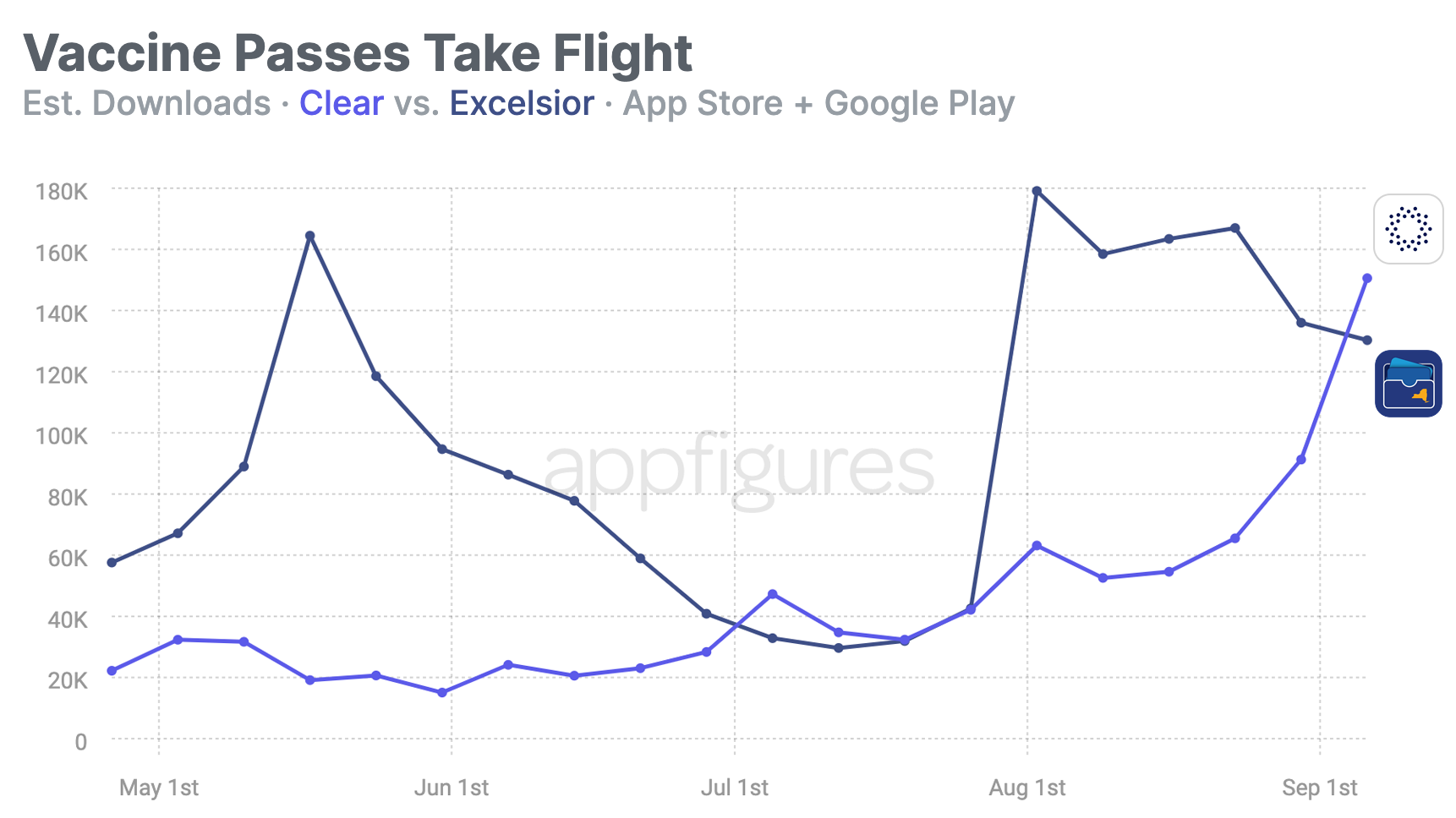 New York now requires proof of vaccination for most indoor activities, from dining to gyms. The app, which holds your vaccine status and is available for anyone who received the jab in the state, is the easy way to show off your status and gain quick entry.

Since launching in May, Excelsior Pass was downloaded roughly 2M times, according to our estimates. That's about 10% of the total population of the state, which is not as high as I expected but also much higher than any other state. But... I suspect most of those downloads are coming from NYC residents, a population of roughly 8.8M, making the share jump to around 25%.

There's another area that requires vaccination, and that's travel. There, the app you'd probably expect to streamline things is actually streamlining things. Clear.

If you travel often enough, you must have seen Clear before. It's the service that lets you jump the line in major airports. It recently added support for showing vaccination status, and its downloads have been climbing.

Our estimates show that over the last few months, downloads of Clear have grown by a factor of five, from an average of 30K per week before the summer to more than 150K in the first week of September.

I always expected (more, hoped) that the unlockdown would mean that covid is behind us and we can get back to normal, but it's nothing like that. Instead, this unlockdown is all about learning to operate with the threat still around us. Politics, opinions, and science and making it so that covid won't be fully gone any time soon. But as a society, we're seeing signs the future is more about evolution than it is about rewinding back to a known time.

A lot has changed in the last year and a half, and more will change in the near future. From how we consume movies, to how we interact with others, and even how we move about IRL. And as I've been saying almost every week now, apps are at the core of this shift.

Speaking of the unlockdown, one app that has its downloads directly correlate with the lockdown is seeing things go back to pre-pandemic levels. 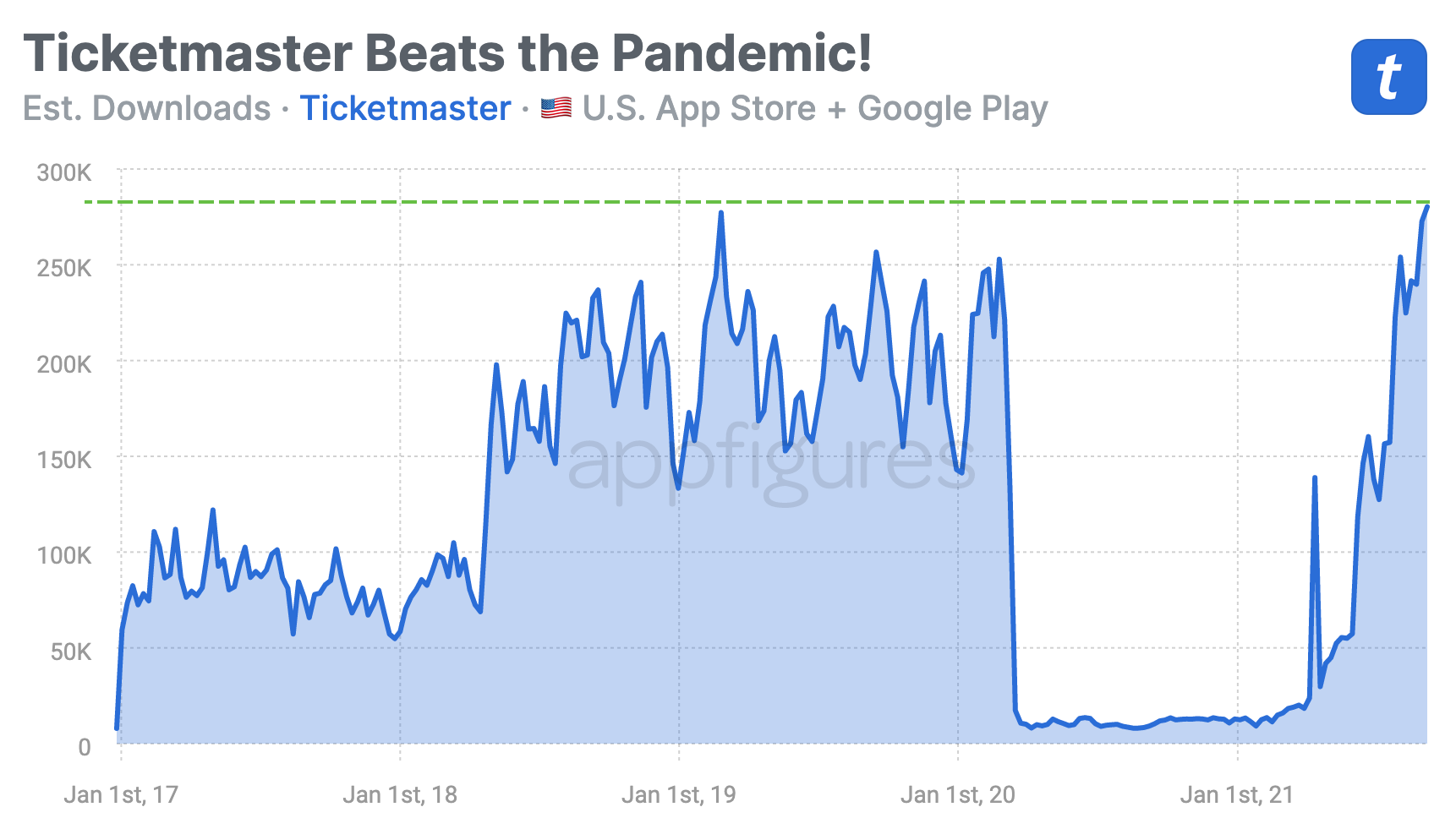 In the last few months, as more events started opening up, downloads of Ticketmaster have started to climb out of the very deep hole they were in during the pandemic. Weekly downloads have surpassed pre-lockdown numbers with 280K downloads for the first week in September, and unlike the temporary spike in March, these numbers are the result of a very positive trend.

The (grand) re-opening. This is great news for many who rely on the IRL industry to thrive in order to exist. It's hard to tell how long it'll take to fully get back to normal, or if we will completely, but judging by this demand, even if we don't, this is going to be great.

The most important item to keep an eye on is how events will hybrid access. Sports already did that pre-pandemic, and that trend has grown a lot since, so it's likely here to stay. But concerts and other similar events that were always just IRL may need to adapt as well. I expect to see more events going hybrid, which will increase revenue and give a more global audience access to what they couldn't have accessed before.

The live aspect of events brings an excitement that can't translate over a screen, but some is better than none, in my opinion.