We'll open this week's round-up by looking at a company I wasn't too familiar with until it went public this week. That company is Toast, and it's got software that helps run restaurants. Sounds kind of boring, but!

In addition to managing restaurants, Toast is also competing with companies like Seamless with its Toast Takeout app.

Unlike other IPOs I've covered in the newsletter recently, Toast's shares rallied on Wednesday, growing 50% over the IPO price of $40, which was already higher than the $34 price the market was expecting.

Let's see if the app had anything to do with it. 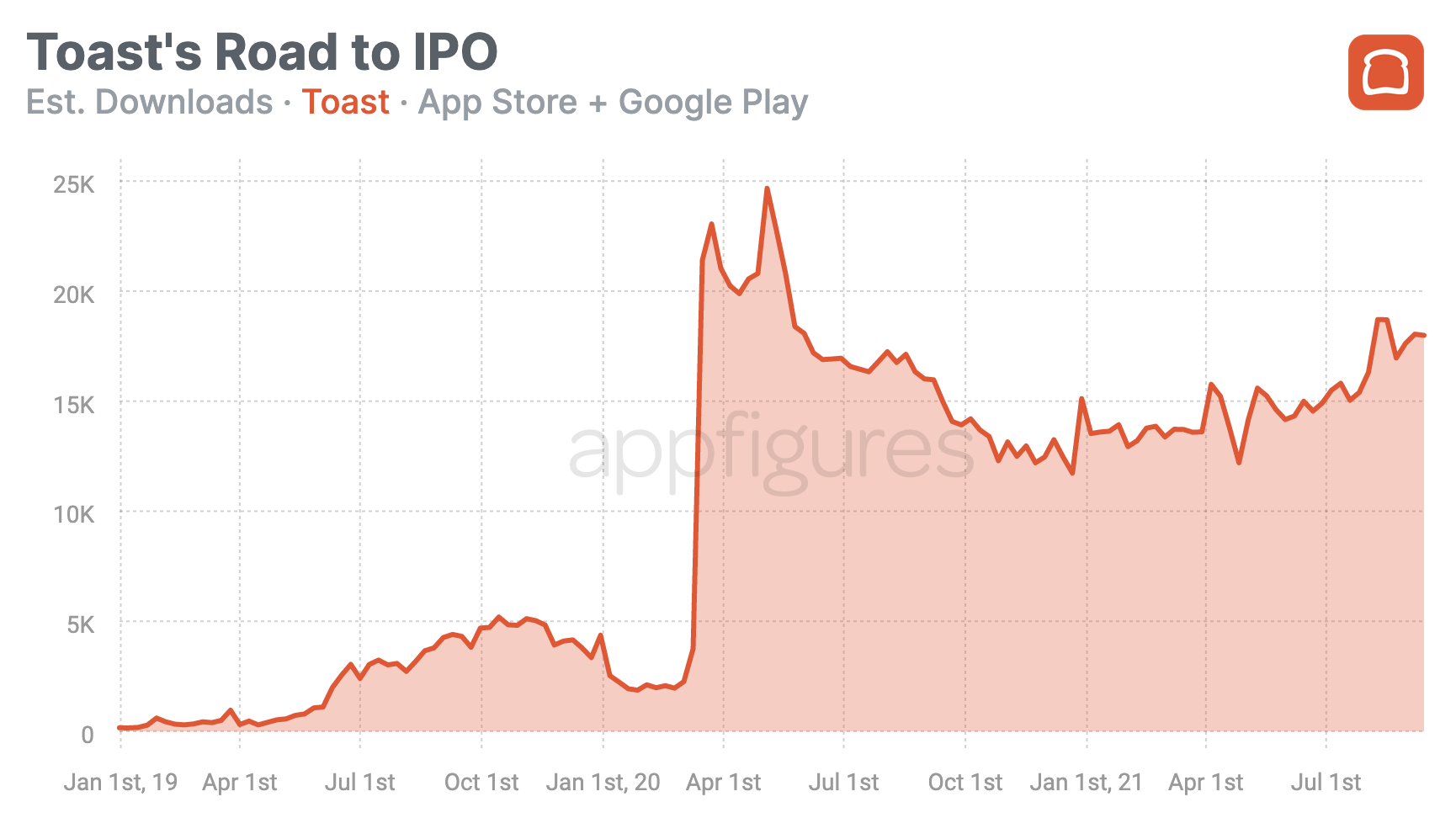 Looking at our download estimates, I think the answer is yes.

Pre-pandemic, Toast Takeout had about 2K downloads every week. That number peaked around October of 2019 to 5K but dropped right after. Then lockdowns started, and with those the demand for food ordering apps grew almost immediately.

Toast's weekly downloads rose to 25K in April, and even though they dropped since, the trend over the last year has been very positive. Last week Toast saw 18K downloads.

It's worth noting that other apps in the same segment saw a similar up and down, albeit at higher numbers.

So far in 2021, Toast has seen almost twice the downloads of Seamless, with more than 567K downloads in the U.S., according to our estimates.

There's a twist, though. You'll notice I'm comparing Toast to Seamless and not the more popular Uber Eats and DoorDash. That's because Toast doesn't handle deliveries but rather just ordering. Much like Seamless. So, it's not really a competitor to those companies yet, but it does something they don't -- it's fully integrated into their system, which Toast also owns. That's where the value is, in my opinion.

Pokémon UNITE landed in the App Store and Google Play this week after debuting on Nintendo's Switch in July. The title immediately took over the top rank in the U.S. App Store, dethroning TikTok for three days straight (and counting).

There's nothing really interesting to look at because it just landed at number one, but if we switch lists to the top-grossing list, things get a bit more interesting.

Hint, it's not the #1 grossing game. Or even close. 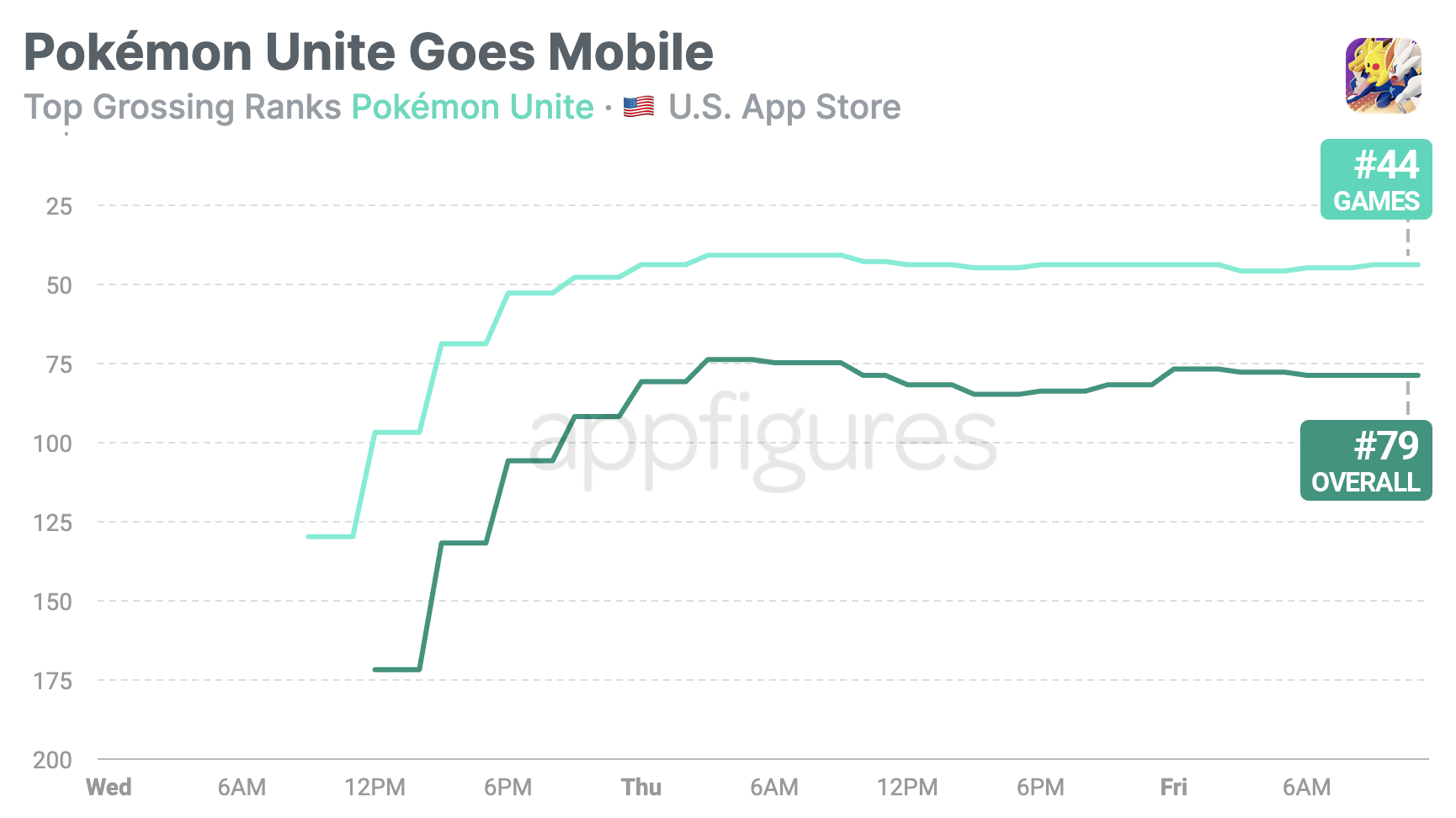 Right now, Pokémon UNITE is 44th in the games top grossing category and 79th overall in the U.S. App Store. It's held both of these ranks since yesterday, and we estimate that translates into somewhere between $300K and $450K of net revenue in the U.S. App Store since launch.

Not a lot, but also not little. Why? When the title launched on the Switch, users could buy power-ups that boost their in-game abilities. Some might call that cheating, but for the makers, it meant cash!

No one likes cheaters though, so for the mobile release, producer Masaaki Hoshino specifically stated that the release would level the playing field, which I take to mean players will be able to win without having to open their wallets right away, and that means its revenue will take time to build up.

As much as I want to see high revenue growth, I much prefer this strategy which will give long-term sustainability. What do you think?

We tweeted a stat earlier in the week that surprised many people, and that's that the share of paid apps, those you have to pay for before downloading, has reached very low single digits.

I was also a tiny bit surprised at how low it is, but not that surprised. Why? Because I've been talking about friction in the app world for 10+ years at this point. 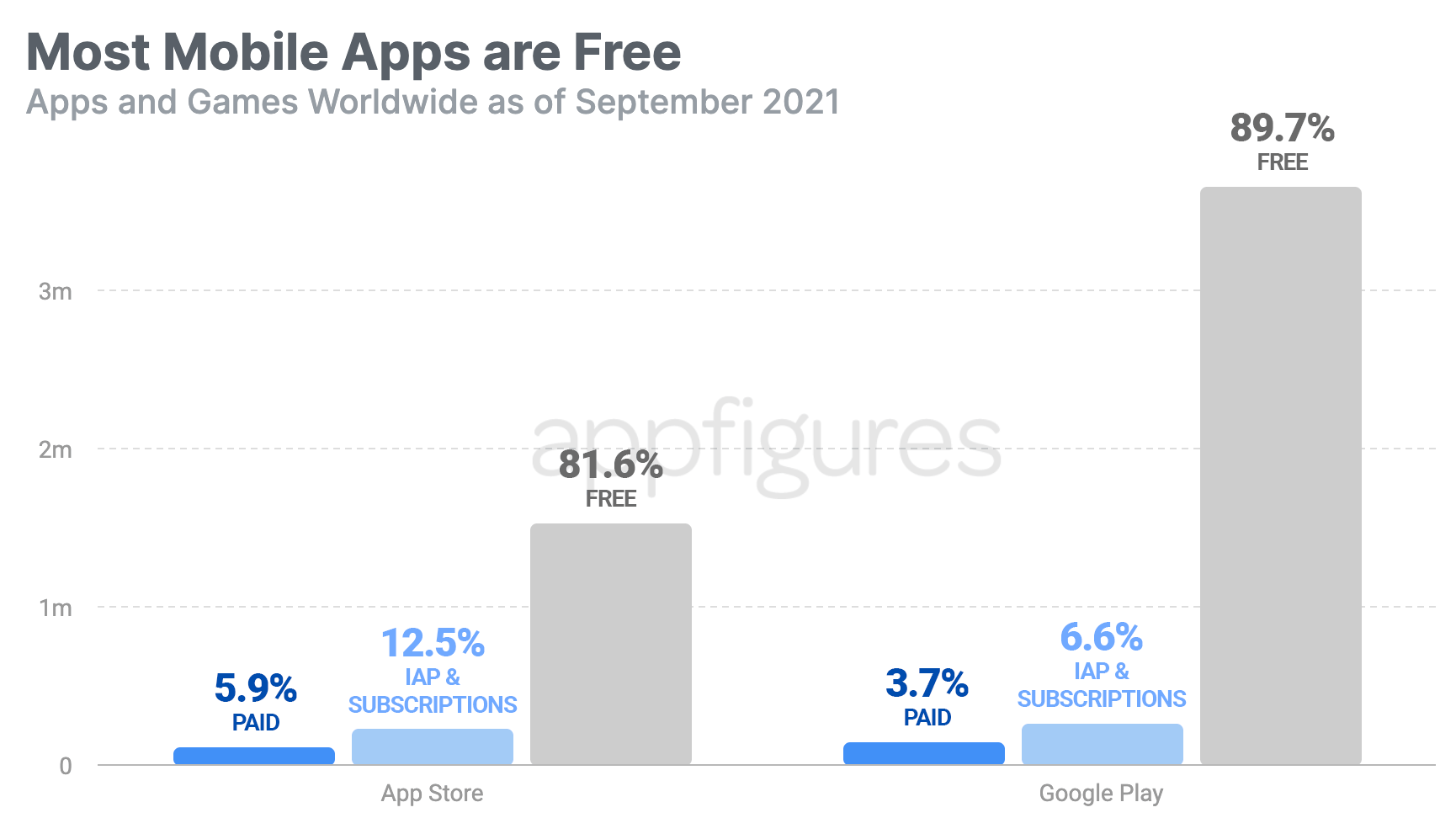 First, numbers. Of the 1,878,916 iOS apps available in the App Store right now, only 111,827. That's just 5.95%. I usually round numbers off because they're easier to read and don't make a big difference overall. But the number is so tiny here that I couldn't do that.

This is the lowest the share has ever been, and all things considered, is probably going to shrink even more in the future as the companies who still publish them realize they're leaving money on the table.

So, what's the alternative? In-app purchases and subscriptions. Well, kind of.

I expected to see more, but there are a few things to consider.

So, what? "Simple" no longer cuts it when it comes to making money with apps. It did for many years, but those are behind us, and that's actually a good thing. If you're still holding on to a pay upfront model, it's time to stop doing that. It'll help you be more competitive and more profitable. I've yet to speak with one developer who regretted switching.

4. TikTok Delivers More Creator Revenue than Twitch in the U.S.

Twitch has been the top revenue generator for creators for a very long time. It was one of the first to enable paying creators via app, and has a very loyal (and large) user-base, which helped it cement its position in the top-grossing charts.

But... TikTok's user-base is also large and also loyal, and as of very recently, also more willing to reward creators. 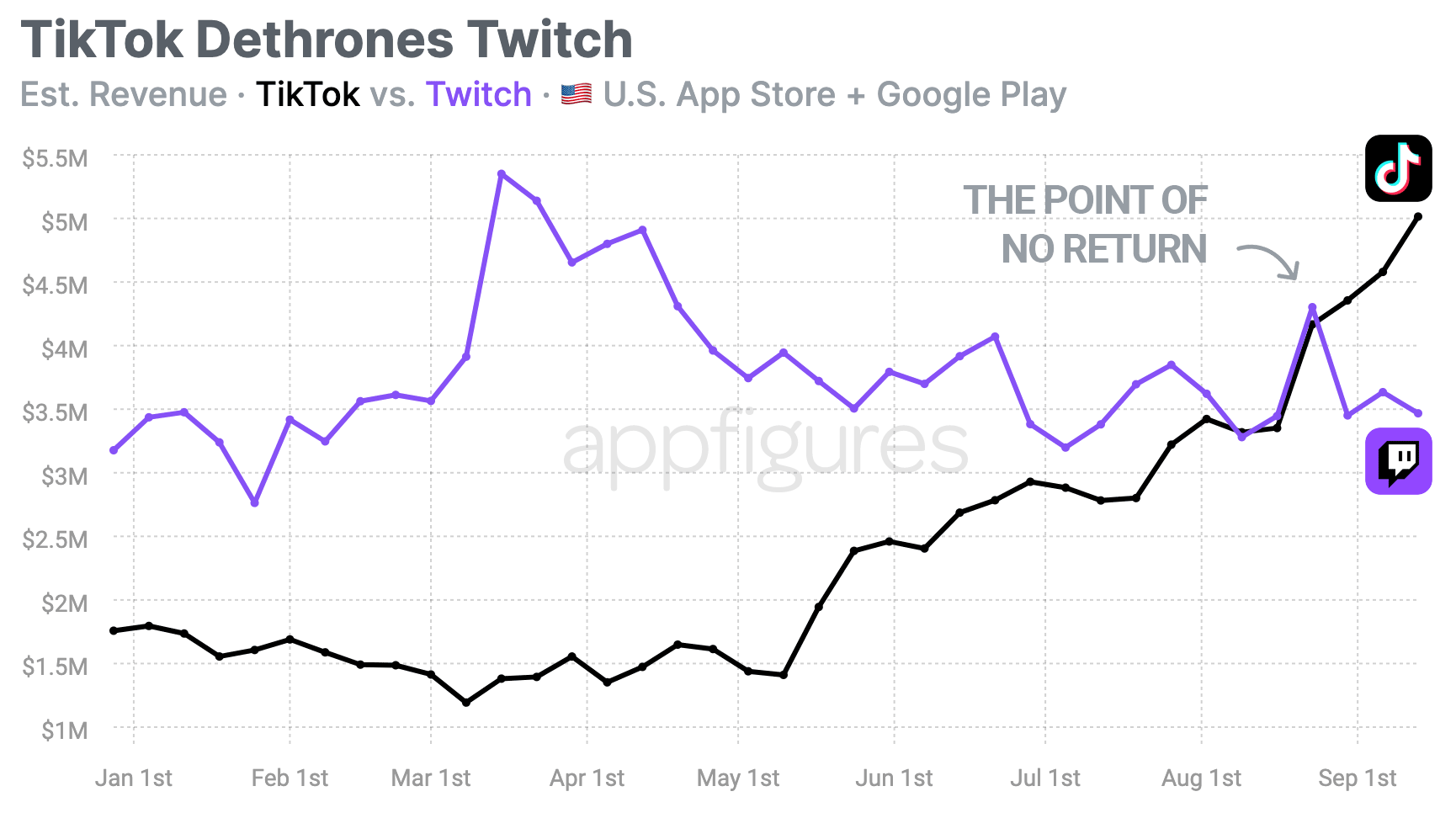 I've talked about TikTok's revenue more than once in the last few months, and that's because it's growing at super-fast speed! And as a reminder, the revenue we see for TikTok comes from users buying in-app currency to give creators. Not its ad business.

For most of 2021, Twitch has been earning 3-5x more than TikTok in the U.S. across the App Store and Google Play. But in May, TikTok's revenue started growing at, well, TikTok pace. They cut the difference to 2x within a few weeks and then got very close in July.

By the end of August, TikTok was earning the same as Twitch, $3M and change of weekly net revenue in the U.S., and by the end of September, TikTok is well ahead, having brought in $5M last week vs. Twitch's $3.5M.

Are these two really competing? Yes and no. Twitch is for gamers and TikTok for everyone else. The way streaming works across the two is different, two. I'm mainly using them as a comparison for how TikTok overtook the king. That's the no part.

But... Attention is finite. The odds of someone being on TikTok and Twitch, and giving enough attention to reward both, are small. In a sense, any service that captures viewes, be it a more direct competitor like YouTube or a less direct one like HBO Max, are competing. Soon enough, TikTok will be outpacing both of those...

Last for this week is a trend I've been talking about for a while now that we can see across a whole bunch of industries. If you've been following the newsletter for a while you know where I'm going with this...

Apps are now becoming the place where things start.

An easy way to visualize this trend is to look at something that had to move virtually during lockdown—Dating. Even as things have reopened and people are out and about, dating app revenue is growing faster than ever before. 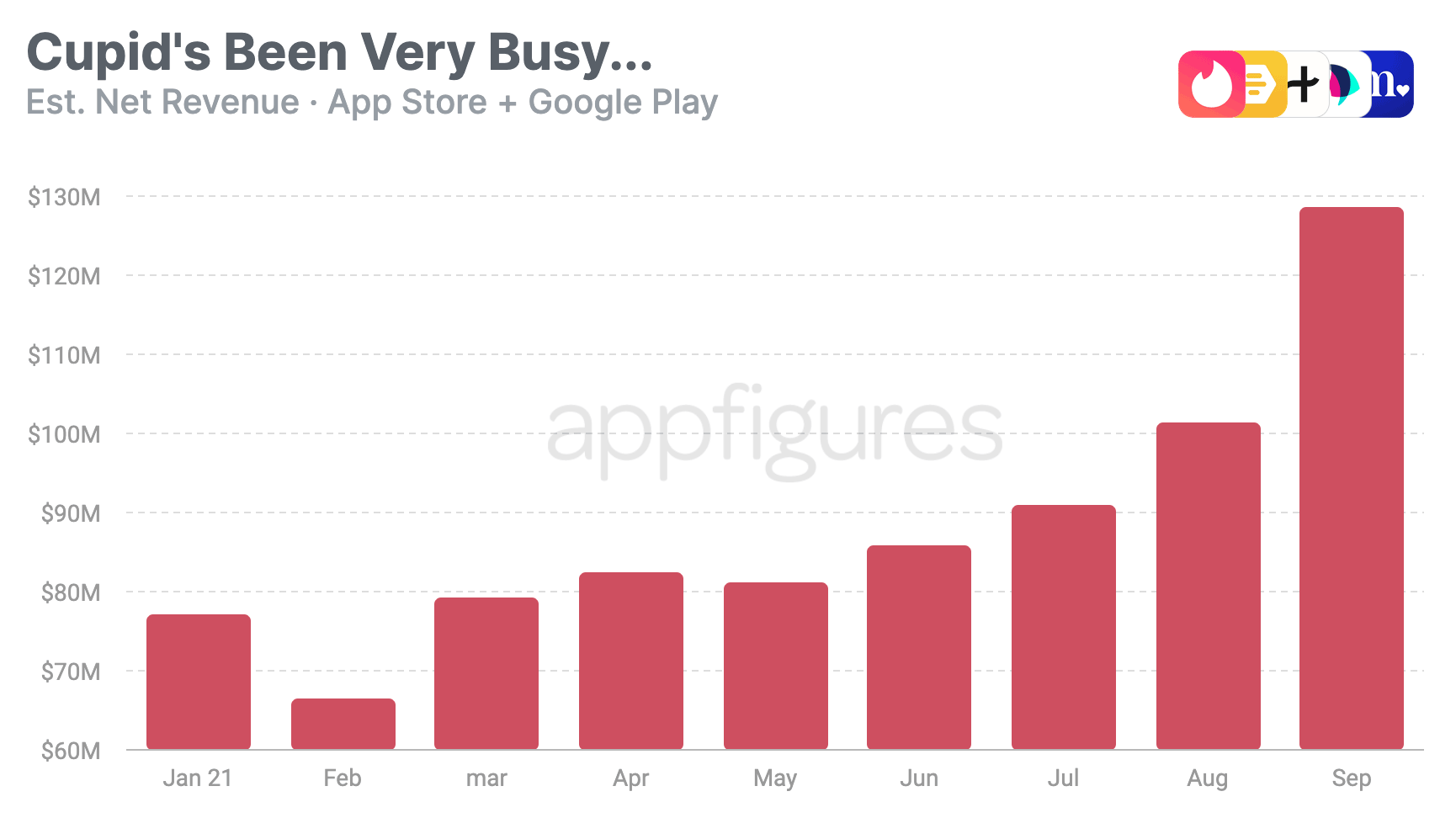 According to our estimates, the top 5 dating apps in the U.S. saw net revenue grow by 29% in Q3, with a collective haul of $321M in the U.S. And that's after they handed over roughly $90M in fees to Apple and Google—mostly Apple.

That's up from Q2's combined net revenue of $250M in the U.S. across the App Store and Google Play, and that was 12% higher than Q1 of this year for the group, which includes Tinder, Bumble, Hinge, Plenty of Fish, and Match.

Going deeper, we can see the majority of growth in Q3 came in August and September. Yes, I know, September isn't over so I used a forecast to ensure I don't underestimate the month. In August, the group hit a new milestone, crossing $100M in net revenue (in the U.S.), according to our app intelligence. We expect September to bring in $129M of net revenue from the U.S.

We're heading into the cold season, and that's been great for growth in previous years. Given the trend the sector is already on, I expect double-digit growth to continue.