Welcome back to This Week in Apps, a short, no-fluff, round-up of interesting things that happened in the mobile industry.

1. A Year of Clubhouse

2021 started with lots of talk about Clubhouse, a then-new service with the novel idea of connecting people via audio-only rooms in an invite-only app.

I started out thinking it'd come and go very quickly because who really wants to talk these days? But it turns out the platform generated enough excitement to make some people want to talk and even more people want to listen. 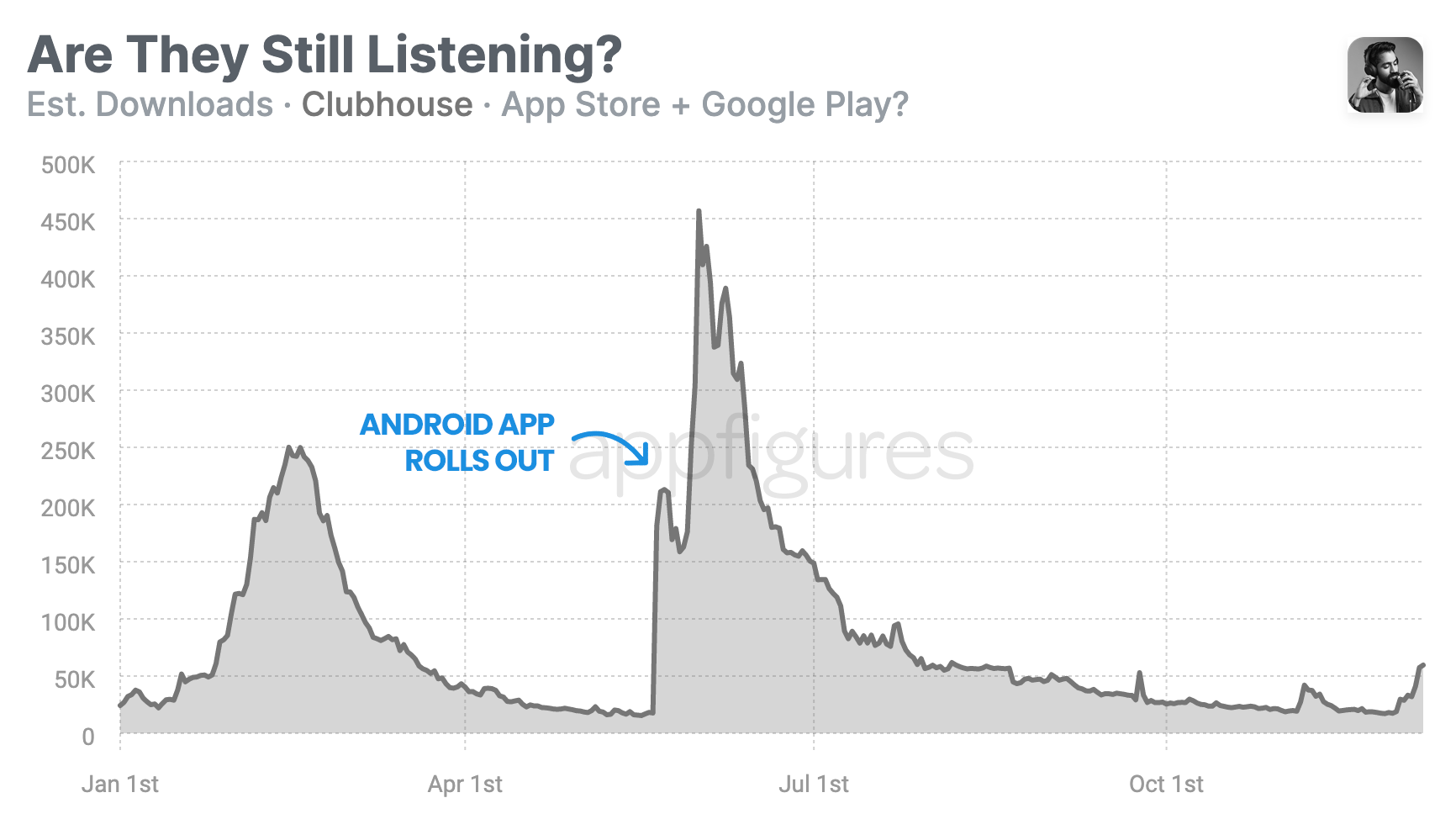 The trend speaks for itself, but here are my top takeaways from a year of looking at Clubhouse:

I think the novelty of audio-only wore off fairly quickly. A few poorly timed (aka. delayed) actions from the team also seem to have wasted the excitement that was brewing back in February. I'd say it's the end, but more formidable opponents have tried to replicate this model and failed, so maybe there's something there?

I never fully got into Clubhouse, but when I did use it, there was more mess than value. Was the experience any different for you?

What you need to know: A year later, audio-only chat app Clubhouse proved it's not just a novel idea but probably the kind that's here to stay. It's been downloaded 28M times since it rolled out last year, and its biggest markets are non-English speaking countries.

2. YouTube is On Fire! But Tinder Still Earned More.

We just published our monthly report of the most downloaded and highest-earning apps in November, and there are a few interesting things I noticed in what's normally a pretty standard report. 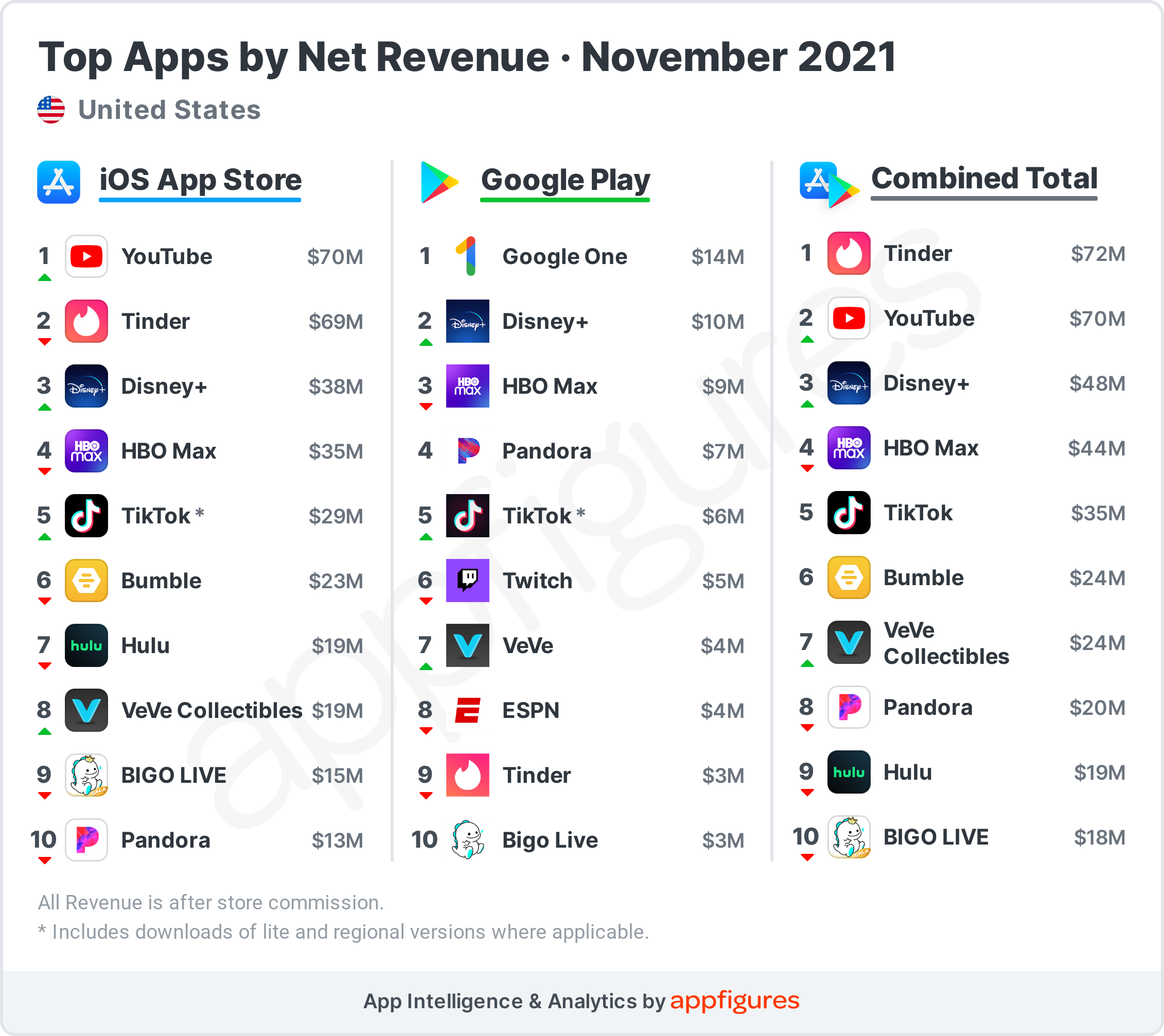 The table above shows the highest earners, so I'll start there. Tinder was, again, the highest-earning app in the U.S. for the third month in a row. This is a really amazing trend I didn't exactly expect.

YouTube, right behind it, grew 23% in November. That means they added $13 million in net revenue from the U.S., according to our estimates. It's a nice chunk of change, but they'll need to keep pushing if they don't want TikTok to beat them.

Switching to apps, which aren't in this graphic but are covered in the full report. Instagram beat TikTok, again, as the most downloaded app in the world. More on that below.

What I found very interesting is that for the first time since we started ranking apps back in 2020, Zoom was missing from this list. Zoom's downloads weren't enough to push it into the top 10, signaling the end of an era for the app that saved the world from lonely lockdowns and also haunts us in our sleep.

There's more to unpack, so if this interests you, I'd suggest reading the full report.

What you need to know: The most downloaded app in the world last month was Instagram. Tinder was the highest-earning app in the U.S. for the third month in a row, beating YouTube, which grew a whopping 23%.

3. What Happened to Twitch?

I'll give that a minute to sink in. 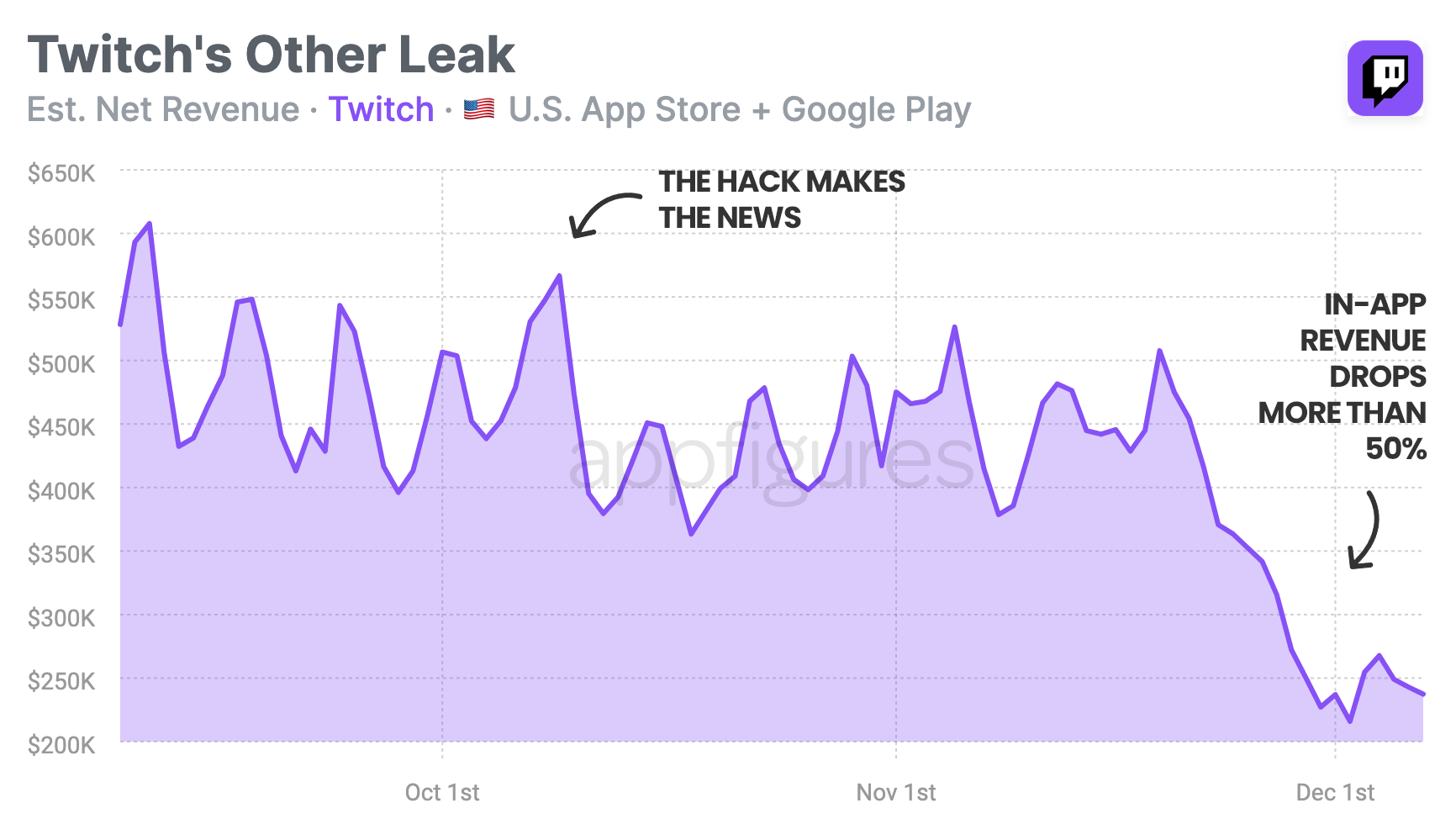 In October, a massive hack was disclosed, and ever since, revenue is looking a little different.

According to our App Intelligence, on an average day, Twitch brings in around $450,000 in net revenue in the U.S. across both the App Store and Google Play.

Towards the end of November, a little more than a month after the hack was disclosed, daily revenue started dropping. And fast. It hit a low point in early December, earning just $215,000 in net revenue in the U.S., which is less than half their daily average.

It managed to recover a bit, but it's still averaging about a half.

Why? Twitch's in-app purchases are subscription purchases used by its users to give money to streamers on the platform (of which Twitch takes a small fee). A drop in revenue means that users are canceling their subscriptions, which is also why the drop didn't happen immediately—existing subscriptions weren't renewed.

Are they canceling it because they don't want their data leaked? Maybe it's because seeing how much the top streamers earn is making them think those streamers don't need more?

What I see here is that given how attractive others platforms are trying to be for game streaming, this might push even more creators to stream cross-platform.

What you need to know: Twitch, the popular game streaming service, is losing paying subscribers at an alarming rate of roughly 50% after a hack was disclosed that leaked the platform's source code and stats about how much money its top streamers are making.

Video is undoubtedly one of the hottest trends at the moment. One TikTok has mainly commanded for several years now.

But while TikTok's revenue is seeing what can only be described as meteoric growth, its downloads aren't growing as much. In fact, they've shrunk quite a lot this year, giving Meta's Instagram the lead. Something it hasn't had in a long time. 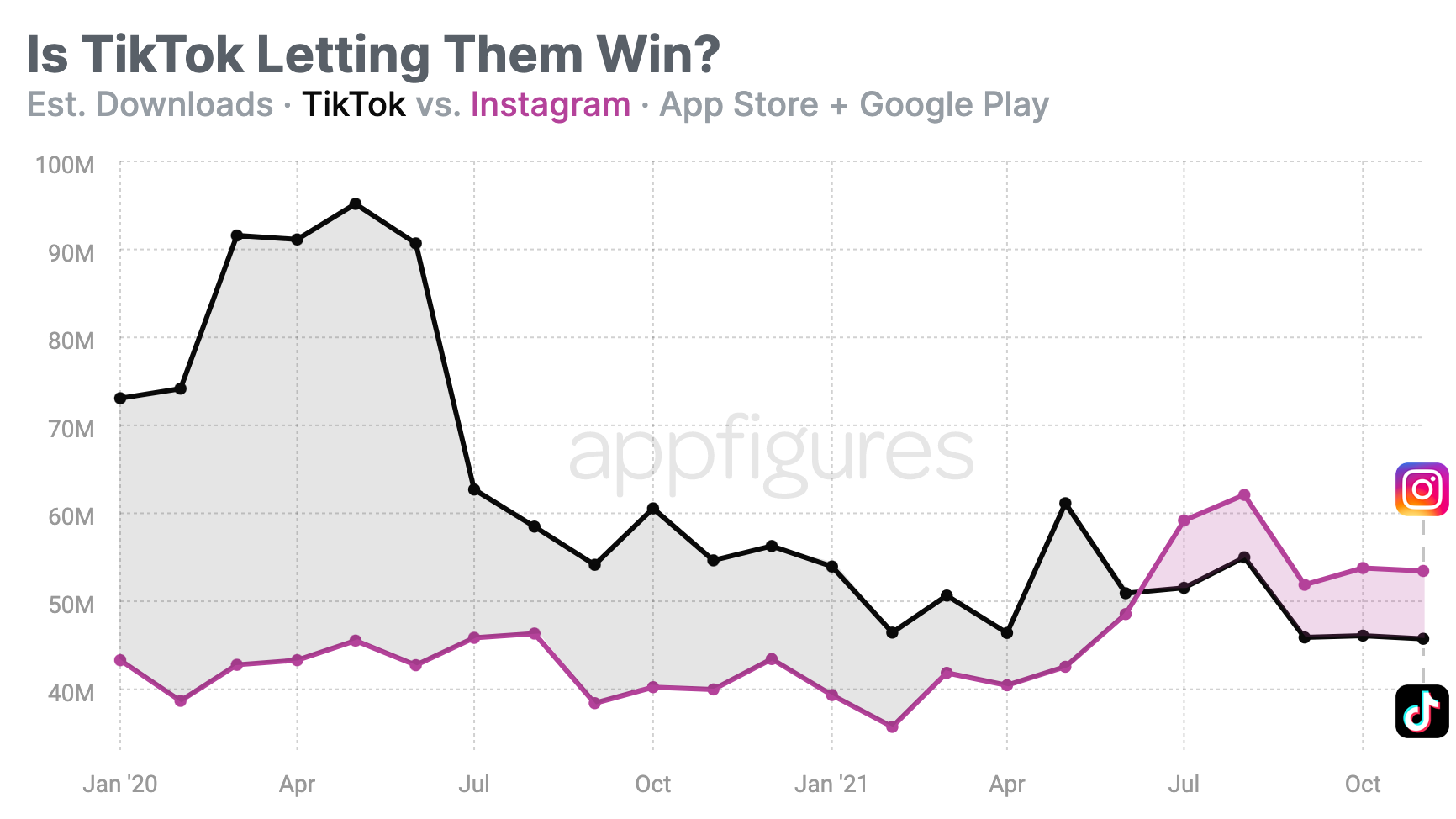 In early 2020, TikTok downloads outpaced Instagram's two to one, but that run has slowed down a lot lately.

By the summer of 2020, TikTok's downloads were down more than 35%. In 2021, Instagram's downloads kept consistent and in June started growing more rapidly. That growth spurt combined with TikTok's slump gave Instagram the upper hand in terms of new downloads. By July the tables have turned and Instagram was in the lead, and it still is now.

This is great news for Instagram and for creators because competition among platforms means they'll continue to fight and innovate.

But don't let downloads fool you. Much like how downloads are higher on Google Play, but revenue is higher in the App Store, TikTok's in-app revenue has been growing exponentially this year, outpacing most other apps in existence.

What you need to know: TikTok's downloads have been slowing down considerably over the last two years. Instagram's have been on an upward trend, and since June, have been beating TikTok's. TikTok's in-app revenue is still growing at a super-fast pace, though.

It's been a while since we looked at the impact of Covid on the apps it hurt the most, but this week I noticed a positive trend.

Event ticket app Ticketmaster, which lost the majority of its downloads as lockdowns hit and events got canceled, has not only gotten back to pre-pandemic downloads, but has also exceeded pre-pandemic highs by as much as 51%. 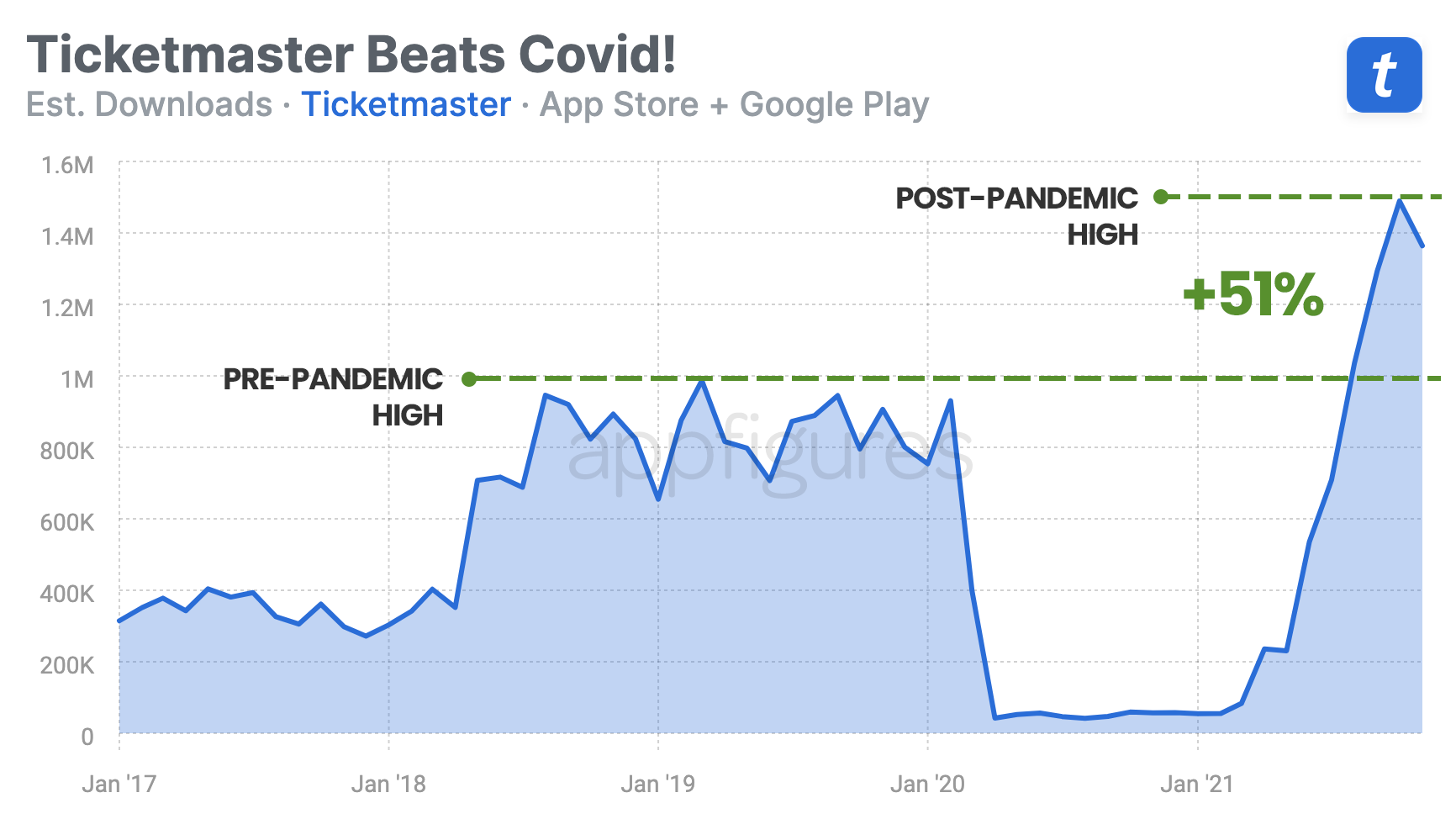 Let's rewind back a few years.

2019 was a good year for Ticketmaster, the popular app for event tickets. Our estimates show it started 2020 with 756,000 downloads in January. But then the country locked down, and downloads dropped fast—Just 32,000 downloads in April.

After a year of low downloads, and as the U.S. started the first reopening back in early 2021, downloads started growing.

In July of 2021, Ticketmaster added 709,000 new downloads, according to our estimates. And then, in August, it hit a new all-time high with more than a million downloads in one month. The highest they reached pre-pandemic was 938,000.

September added 1.3 million downloads, and October added a massive 1.5 million new downloads. It dropped a little in November, but it's still very high.

People are eager to go back to normal, and they're doing it by app, a trend that's visible across pretty much every aspect of our lives now. The second gold rush for app developers is taking place right now.

What you need to know: Ticketmaster has hit a new all-time high with 1.5 million new downloads in October, according to our intelligence. This peak is about 67% higher than pre-pandemic downloads.