1. The Highest-Earning Apps This Christmas

I've been waiting for this chart for quite a few months, trying to theorize who would win and by how much. Not to toot my own horn, but I got pretty close!

What I have for you here is a ranking of the highest-earning apps on Christmas day in 2021 in the US. I have one for the App Store, one for Google Play, and another combined. If you've been following the newsletter for a while, this should look very familiar. 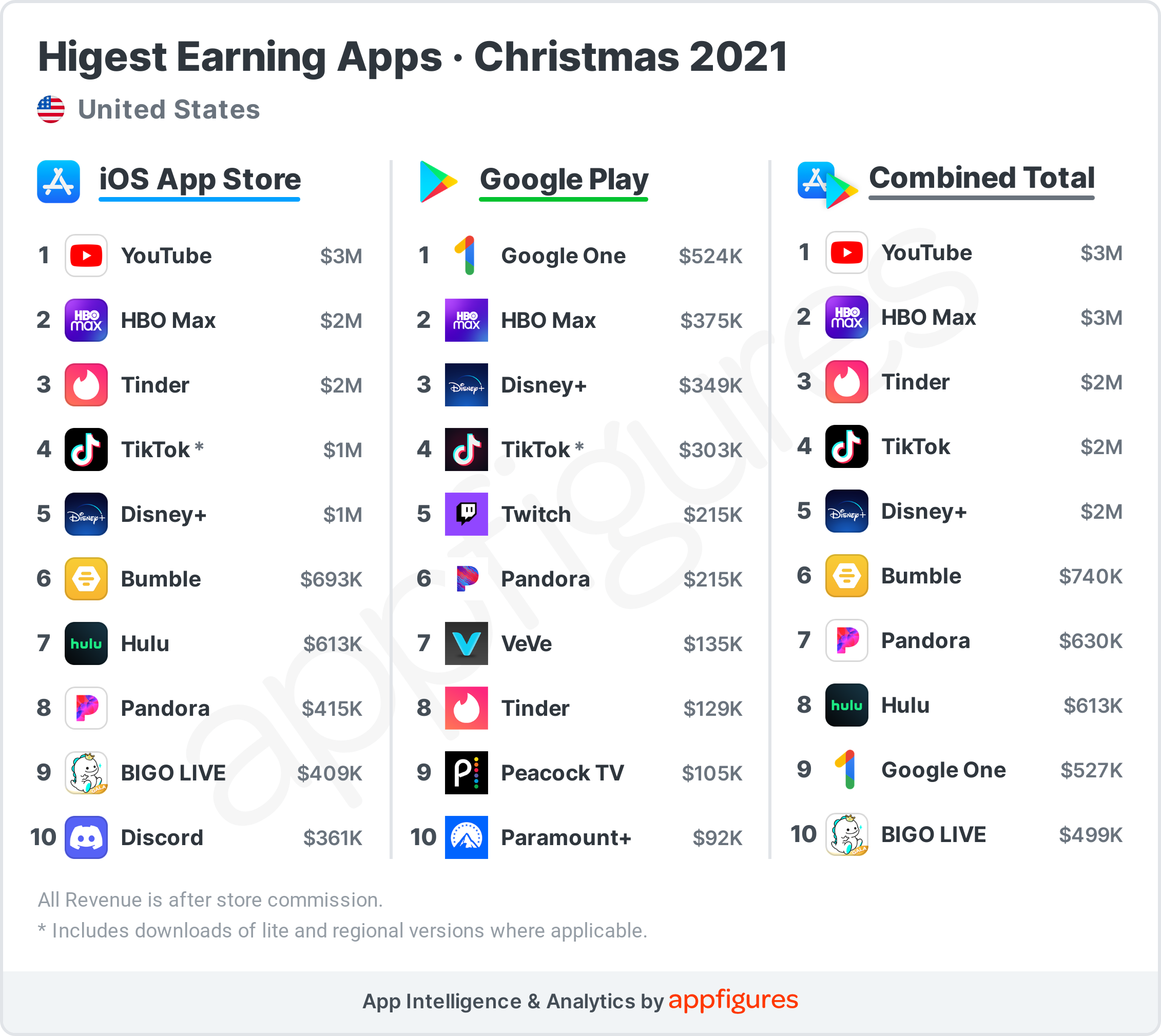 Let's start with the obvious - streamers. YouTube, not a traditional streamer but a definite contender, was the highest-earning app on Christmas day, bringing in $3M in net revenue in the US, according to our estimates. Short a few thousands was HBO Max, which was my pick for the winner. Tinder, TikTok, and Disney+ rounded out the top 5.

We estimate that together, the top 10 highest-earning apps brought in $14M in net revenue in the US on Christmas day.

I can talk about the top 5 for far too long, but if you've been reading for a while, you probably know what I'm going to say. The battle between HBO Max and Disney+ seems to have a somewhat clear winner, but it's the battle between TikTok and YouTube that I'm keeping an eye on. I give TikTok a few more months to take over.

Instead of going through the rest, which you can do at your leisure, I'll point out a few apps I didn't really expect to see:

What you need to know: YouTube was the highest-earning app on Christmas day, followed by HBO Max, Tinder, and TikTok. Together, the top 10 highest earners brought in $14M in net revenue in the US.

If you looked at the most downloaded Android apps on Christmas weekend, you'd notice Apple was there. That's right! And not with the AirTags app I looked at last week.

Apple's Move to iOS app climbed into the 7th most downloaded spot, and that's across both apps and games, so you know it was serious.

In case you aren't familiar with the app, it does exactly what the name says, which is to help Android users who are ditching the robot and going Apple to move their contacts and other personal data from their old device and to its new home. 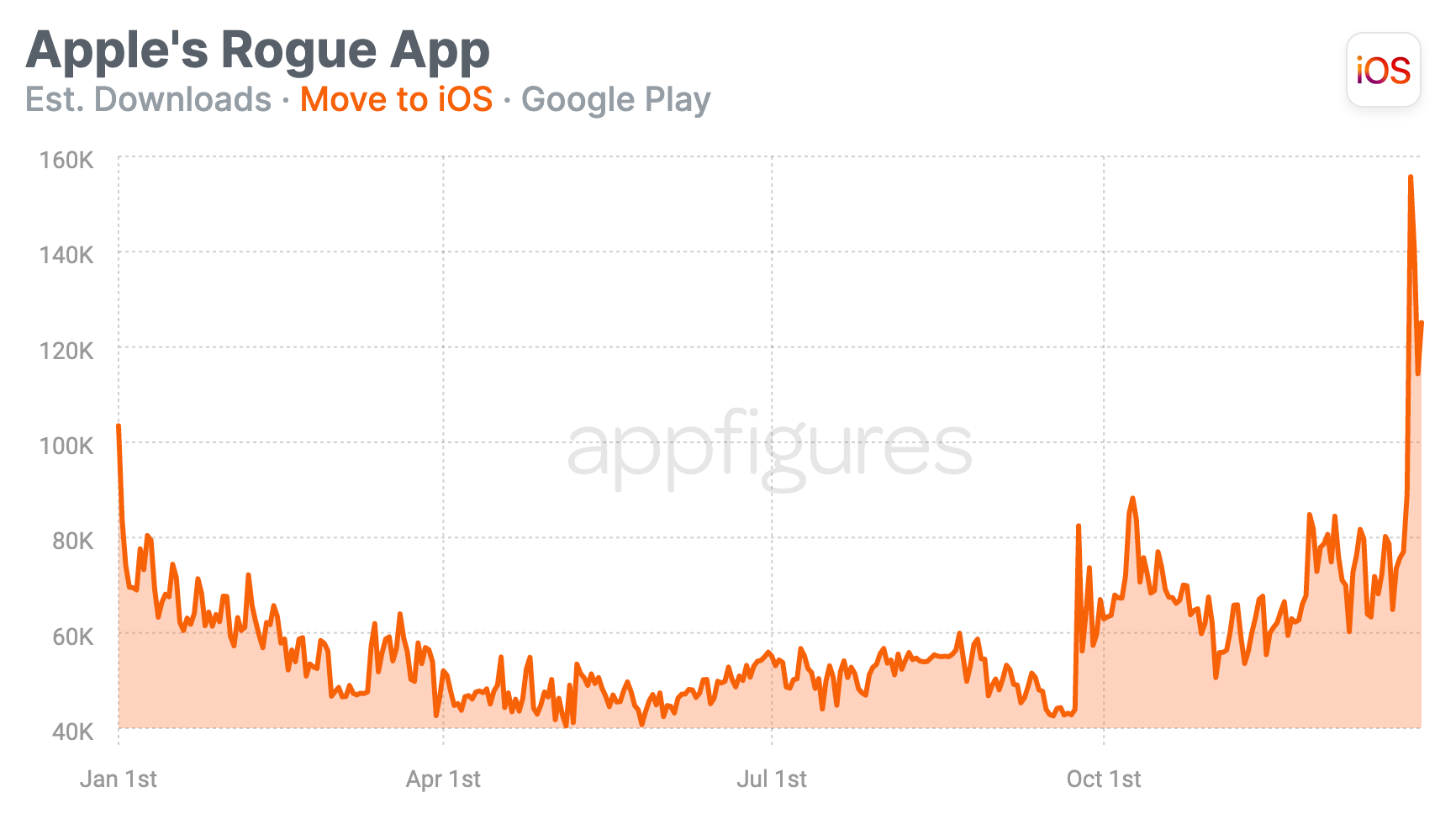 Downloads rose to 156K on Christmas day, which happened to be Saturday, a perfect day to unwrap new presents. That's roughly 3x the average for the app.

The number stayed high on Sunday, with 140K downloads, according to our estimates, and is still keeping high so it could cross the half-million mark before the year ends.

In total, Move to iOS was downloaded 21M times in 2021, according to our App Intelligence. That's about 16% higher than 2020, which means good news for Apple.

I'm not taking sides on which device or platform is better, but if you compare the lists above, you know where the money is. There's a reason for that.

What you need to know: Apple's app for helping Android users migrate to an iPhone became one of the most downloaded Android apps on Christmas and earned 290K downloads on Saturday and Sunday.

A while back, I looked at downloads of Alexa and Google Home over the years and noticed a very alarming trend for Amazon and Google. That was last year, where downloads shrunk significantly instead of grow as they should have.

That was, of course, the result of the HomePod Mini dropping last November. Now that we have another Christmas worth of data–and a new Mini–we can see if last year was a fluke or if Amazon and Google have something to be worried about. 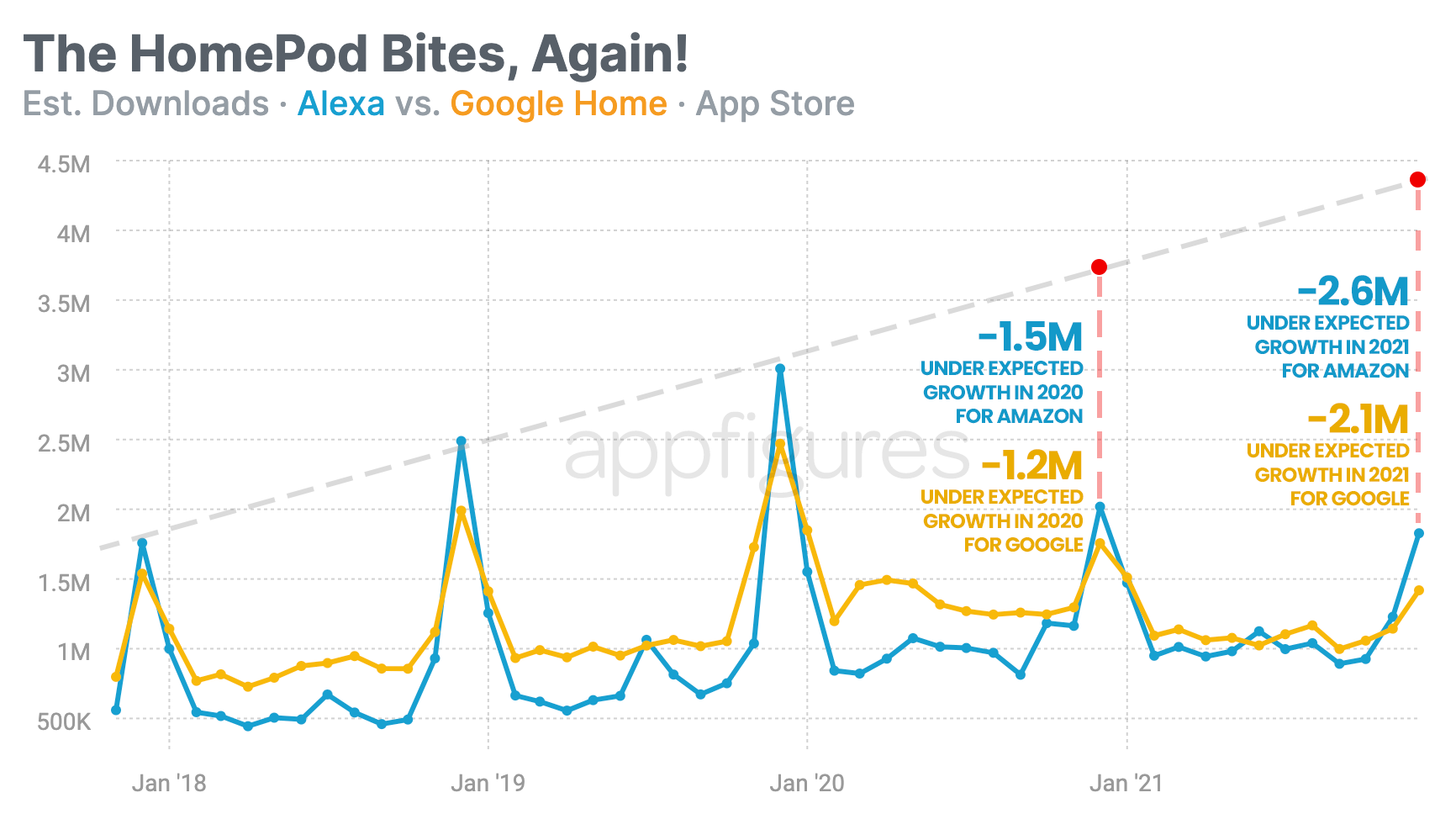 According to our app intelligence, downloads of the Alexa and Google Home apps were growing by a healthy rate that added at least 500,000 more downloads every Christmas. Based on previous years, we'd that Alexa to hit 3.7M downloads in 2020 and 4.4M downloads in 2021. Google was a tad bit lower but followed a similar trend.

In just two years of the HomePod Mini, both market leaders lost all of their growth, and demand for both shrunk by a considerable amount.

And for the naysayers, yes, it could be privacy concerns, or maybe everyone already has one of those devices. I don't think so. Well done Apple.

What you need to know: Amazon and Google's voice assistant sales were choked by the HomePod Mini. Demand for both did not grow in 2021 and instead shrank, losing them millions of device sales.

While we're talking proxies, one interesting chart I've been keeping my eye on is downloads of the Tesla app. The app you need to drive your Tesla if you have one.

Those downloads are a great proxy for car sales because you don't need the Tesla app for anything else. It might overestimate, but we're rounding anyway. 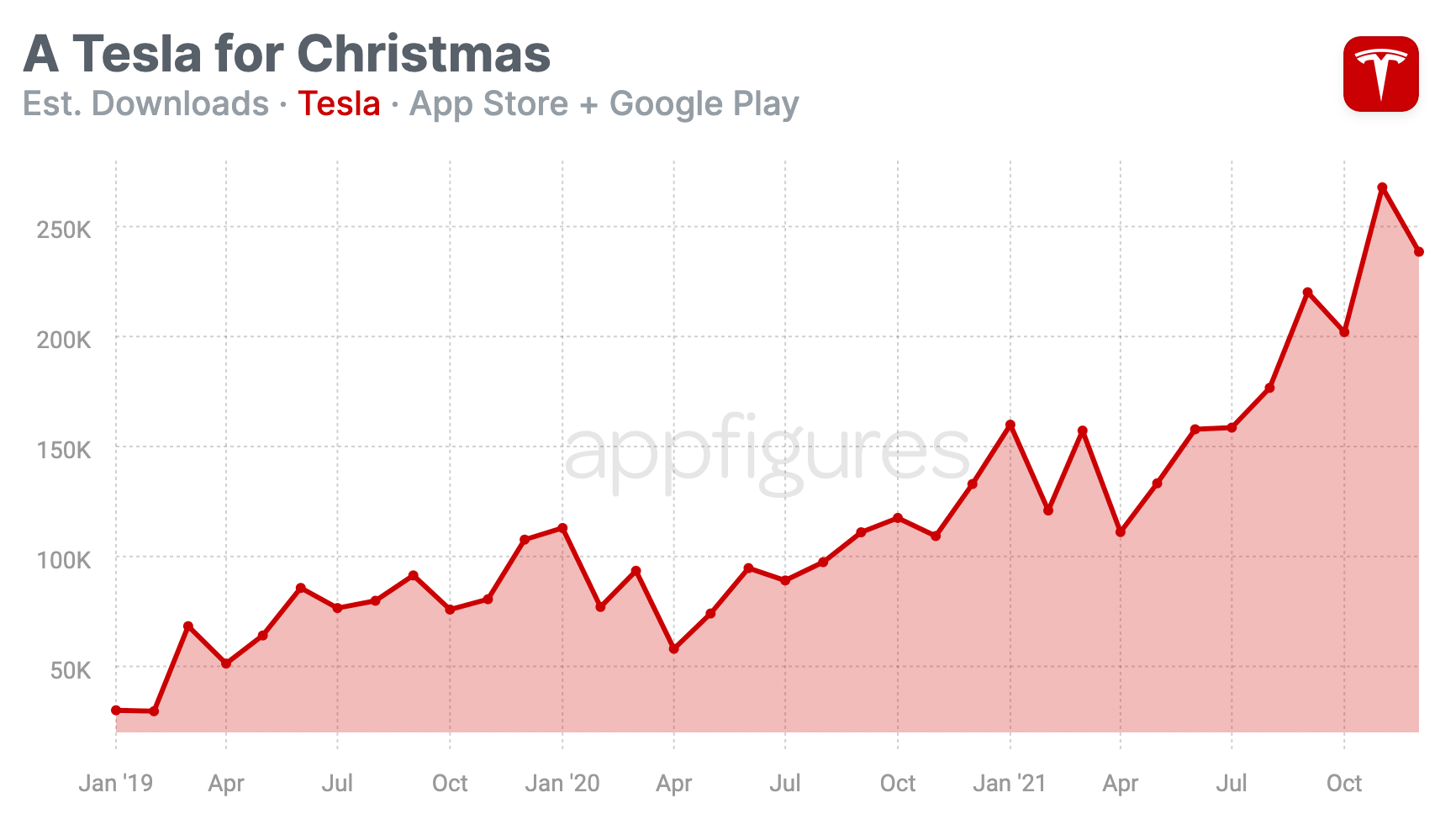 I'm a Tesla fanboy, so to me, these numbers are very encouraging, but what I also find interesting is that when you look at the monthly data, the chart above, every month this year was higher than 2020, and some by a lot.

With so many cars sporting a huge touch screen in them, I wonder if Tesla is planning to start its own app store. I know a thing or three about app stores, so if Elon needs help, I'm an email away.

What you need to know: Using app downloads as a proxy to car sales, we estimate that Tesla sold 2.1M new cars in 2021. That's a 25 increase from last year.

One last proxy, I promise. And I only chose it because it's a pretty significant trend that will definitely impact 2022.

Virutal Reality, or as the kids call it, VR.

The trend I noticed was a substantial increase in downloads of the Oculus app, Facebook's Meta's VR headset. Much like a Tesla, the app is necessary to operate the device and is useless otherwise, making it a good way to estimate device sales.

And if we follow that logic, demand for VR is HOT! 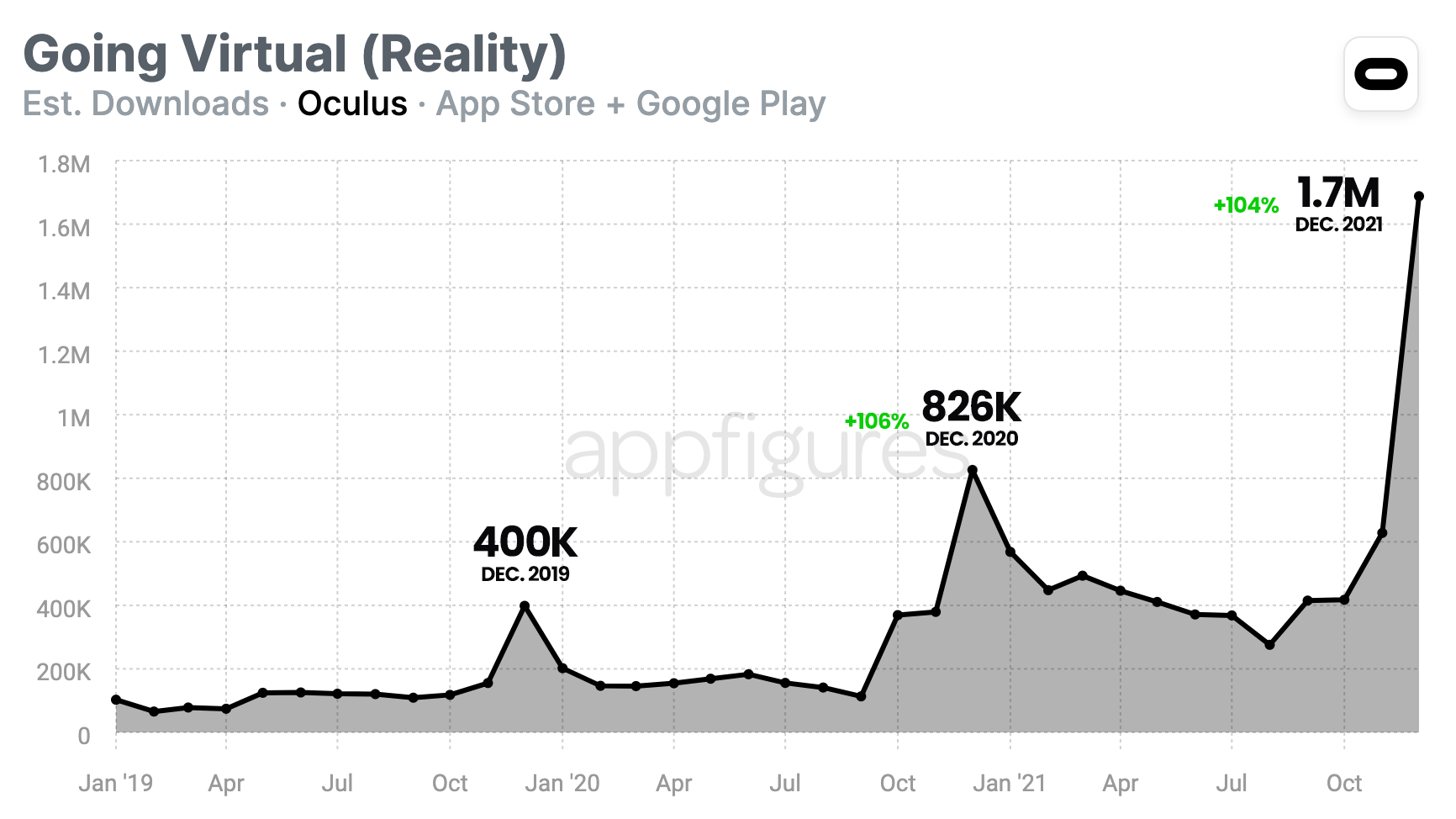 Downloads in December hit 1.7M, according to our App Intelligence, after the strongest Christmas Oculus has ever seen.

Looking at the chart, you can clearly see the spike Oculus sees every Christmas. And you can also see the scale 2021 brought.

With such high demand and with such high growth, we at least know that those ads Meta's running for Oculus are working. Kidding aside, Mark is banking on VR, and the more the devices feel familiar, the more VR can become a reality.

Apple's push for AR will face a similar path.

I don't know where you stand on VR, but I'm not looking forward to a world like that from Ready Player One.

What you need to know: Based on app downloads, we estimate that Oculus device sales hit 1.7M this Christmas, more than double what we saw last year.