1. Dating Apps Are No Longer (Just) for Freeloaders

Dating apps were an easy go-to when lockdowns started because of their convenience, but dating apps have a long history before that. They were all the rage a few years ago, from an investment standpoint, until a real issue emerged.

The users were there. They swiped and uploaded pictures and did all those things a developer wants. But they weren't paying... In economics they'd be called freeloaders. That's when investments cooled down, which helped Match pretty much take over.

But that's changed in a way that I think is likely permanent.

I rounded up the top dating apps in the US (full list below) and summed up their revenue over the last few years. 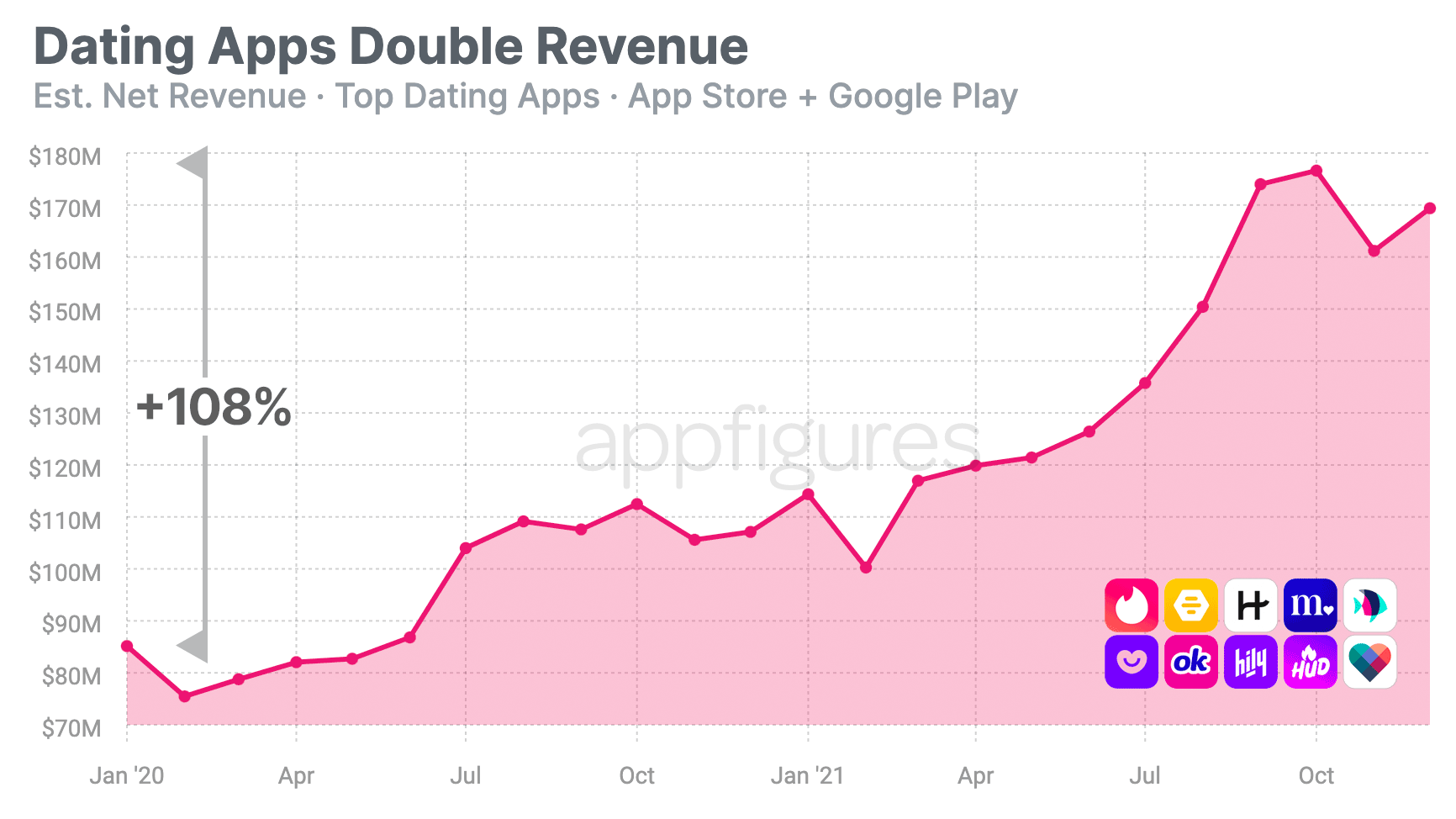 Led by Tinder, the heavy-weight champion of the bunch, dating app revenue nearly doubled since the beginning of 2021. In absolute terms, that equates to an additional $90M in net revenue. And that's per month!

So I think it's safe to say that even though freeloaders are still the main users of dating apps–which we can clearly see by looking at all the negative reviews Bumble has been getting over the last few weeks after moving more features behind the paywall–the paying side of things is now much more lucrative.

What does that mean for competition? Normally, with a segment like this, you'd expect that more money = more competition, but when it comes to dating apps, that's not exactly what's going on.

Starting a new dating app won't be an easy move, but it's not impossible either. What I think we'll see more of is moves like Bumble's, that aim to monetize better, and overall more pushing for apps that have some popularity but not enough discovery. OkCupid, I'm thinking of you here.

Investors and apps in this category are likely monitoring every move competitors are making and its impact on their revenue estimates. And those that don't... well, those won't get far in 2022.

One of my favorite go-to topics last year was movie streamers, and not just because of the big numbers they put up, but more so because it's an ancient industry that (finally) figured out how to evolve away from set-top boxes and to mobile devices.

It may seem like an easy transition, but I've seen quite a few industries that faced such a transition and failed.

You may expect me to dive into big names like HBO Max and Disney+, the winners in this race, but I've done enough of that recently. Instead, the trend I'm alluding to here is everyone else. Apps like Peacock and Paramount+ have both been making some gains this year.

I rounded up 6 of those (full list at the end) and looked at how their revenue grew month-over-month this year. 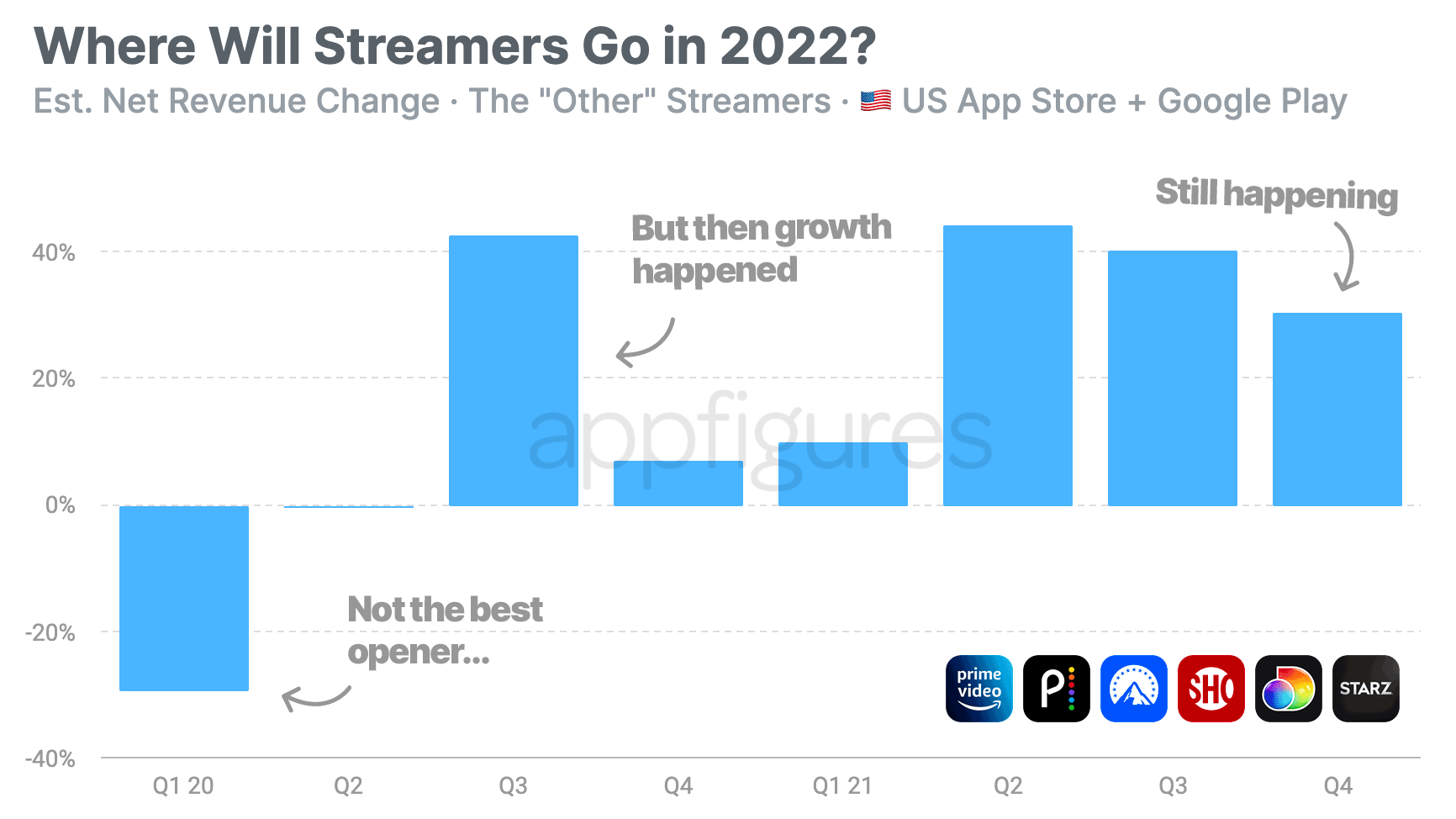 Going back to 2020, pre-pandemic, and before the trend really started taking off, you can see growth didn't happen at all. Based on our estimates, US net revenue of all of the apps that were available at the time shrunk by 30% or roughly $10M. But that quickly changed.

By Q3 of 2020, more apps joined the race and either launched or started to seriously promote and monetize. According to our app intelligence, US net revenue grew by 43% in Q3 of 2020.

Then, in 2021 the growth continued pretty much at that rate but quarter over quarter.

You might be seeing a slump in Q4, but given how high these rates are to begin with, even that is a positive.

The battle will continue in 2022 and will get even more fierce -- more content, more promotions, and... more apps.

And with so much content, the name of the game will be competition, or rather, staying a step ahead of the competition.

TikTok is the #2 top-grossing app in the US right now. Remember the prediction I made a few weeks ago that TikTok will become the highest-earning app in 2022? Well, that's happening!

But it's not just about TikTok. Creator platforms like TikTok, meaning ones that reward creators (and hence the name I've given them) have proven that creating is a real business.

YouTubers have known about this for a while, but even that's changed drastically, and it's so much easier to get started on YouTube than it was just a few years ago.

Just how big is this segment? Let's look at the top 3 creator platforms; TikTok, BIGO, and Twitch. All three offer in-app purchases so users can pay creators. 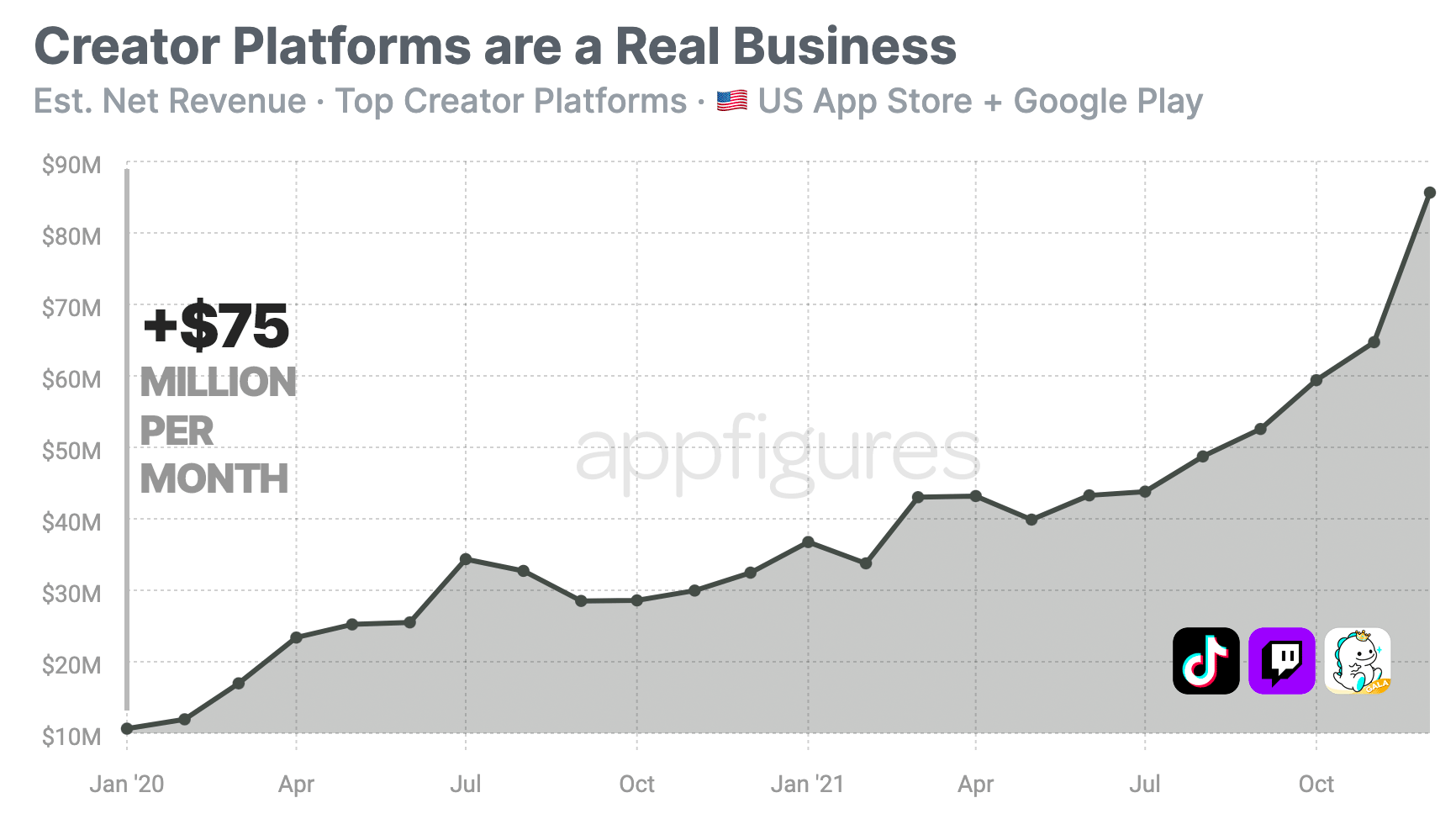 The majority of this revenue is now TikTok's, but that's not how it started. In January of 2020, both BIGO and Twitch were earning more for their creators.

And even though TikTok's meteoric growth eclipses the rest, those have also grown substantially (for normal companies). BIGO's US net revenue nearly tripled to $15M! Twitch is going through a rough patch right now, but even after losing roughly half of its revenue in the last two months of 2021, it's still doubled. And if we ignore the last two months, we can see revenue has grown nearly 5x.

For those of you keeping count, these numbers mean BIGO was the highest earner in 2020. Did you know it existed then?

Unlike dating apps, where only a small few companies benefit, this trend is more about everyone. Almost every platform where creators can create has (or is in the process of adding) a way to pay creators, and this year I expect to see more people try their hand at it.

Creating, just like everything else, isn't easy. So I don't expect everyone who tries to succeed, but the more people try the more content these platforms have, and the more diverse content a platform has the more users they'll attract.

It's a very healthy growth loop, and it's a sustainable one.

4. People are Paying for Music

Another thing you can stream that now even more people are willing to open their wallets for is music.

To see how much growth I've added up the top music apps by revenue, which include YouTube Music, Pandora, Tidal, SoundCloud, and Amazon Music, and looked at their in-app revenue. Since most of them monetize directly on Android, this chart consists of US revenue only from the App Store.

Wait, what about Spotify? Although Spotify is the name in music, its war with Apple means they're not the highest earners in the bunch and their revenue is declining. I did not include them in this analysis because of that. 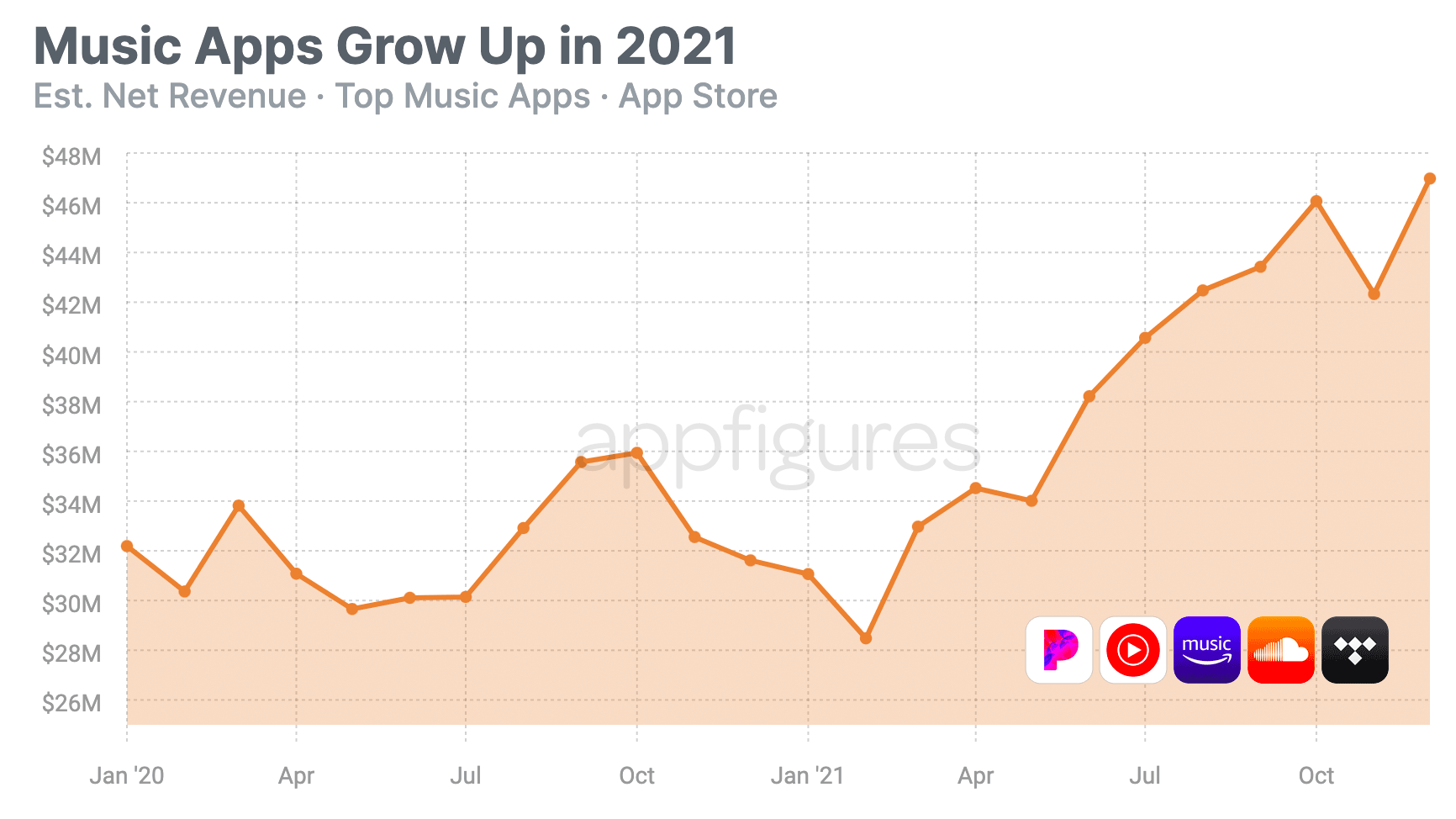 When we zoom in a bit more, it gets even more interesting. Pandora, which was the market leader in 2020, actually dipped a bit in 2021 and made way for YouTube Music to take over. The two added $14M and $16M, respectively, in December of 2021 according to our estimates.

Clearly, streaming is here to stay grow, in all forms that we can consume.

5. Where Will Hyper Casual Games Go?

I've talked about hyper casual games, those (mostly) stick figure games that rise to the top of the charts for a few days and then disappear, quite a bit last year. At least once a month when running through our most downloaded games report.

Hyper casuals monetize with ads usually, so the key to success is downloads. Lots and lots of downloads.

Thanks to great ad targeting tools, that's pretty easy these days. Well... Was. The party got put on pause when Apple's App Tracking Transparency hit and caused targeted ads to be less targeted and convert less.

I'm going to analyze them a bit differently. To get not just a good idea of downloads but also of how hard those developers are pushing, I scanned all of our most downloaded games charts for this year (which you can find here) and filtered them down to only include hyper casual games. Then, summed up the downloads and charted the total by month.

In case I didn't lose you yet, here's what it looks like: 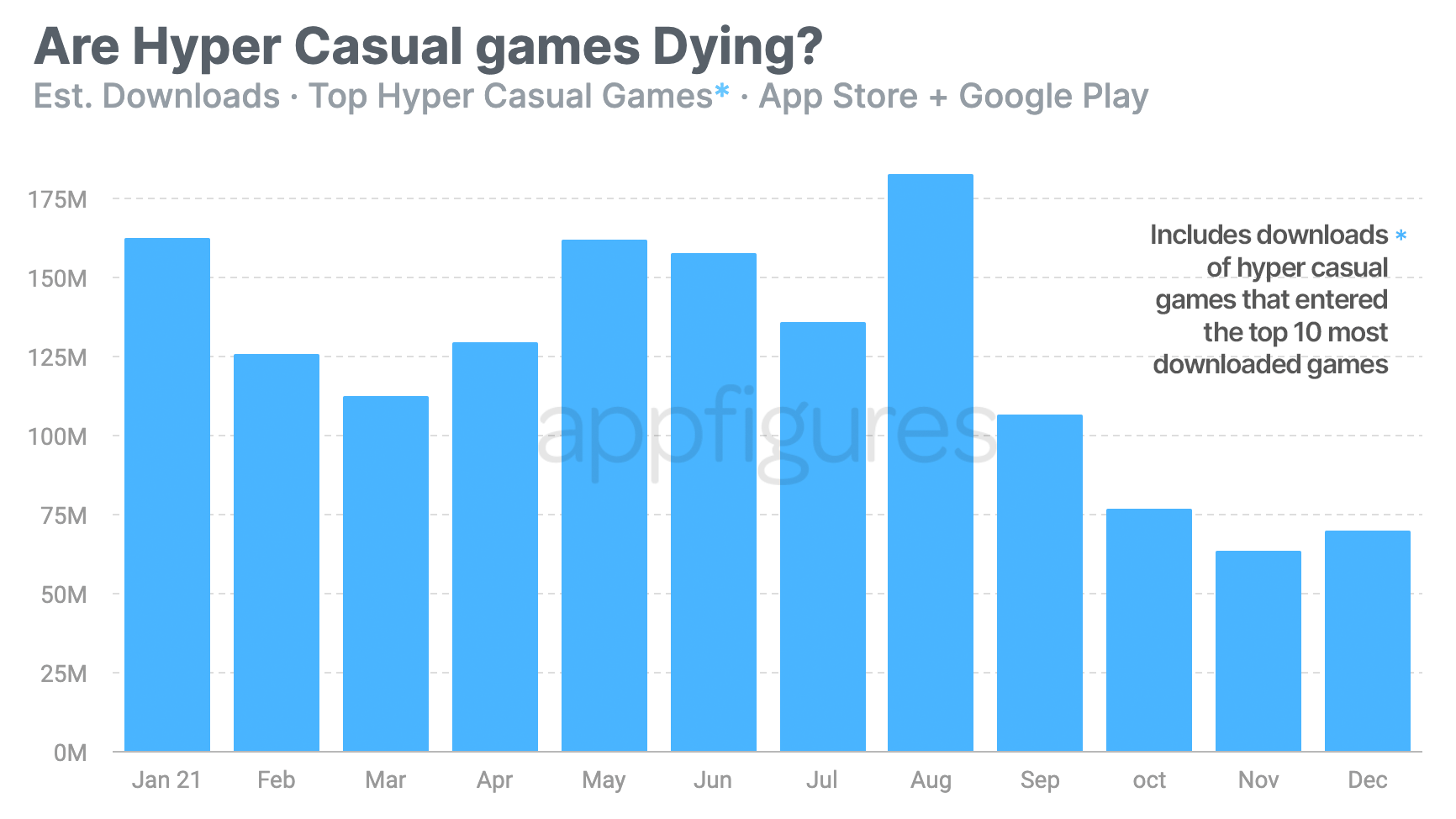 And right off the bat, you can probably guess where I'm going with this...

Now, these downloads are a sum of downloads from the App Store and Google Play, so growth on the latter is masking the decline of the former. But, even with that in mind you can still see the trend is declining.

But look at that sharp decline right after.

October dropped to just 4 games and 77M downloads, and in November they dropped even more. They rebounded a teeny tiny bit in December, but we're looking at a drop of 50% from January.

Is it the end of hyper casuals? I don't think I can give you an answer there, but if we zoom out a bit, between the higher costs of advertising, shortening attention spans, and enormous amounts of content out there, I think 2022 will usher in an even more hyper set of hyper casual games.

What do I mean by that? Even simpler game mechanics, that are easier to churn out, with higher emphasis on having everything based on data.

I'm not the audience for these games so it doesn't matter how much I like or dislike such a future, but strictly looking at market trends, I think it's inevitable.