FYI: This is the 100th issue of This Week in Apps 🎉 Thanks for reading!

1. Apple's Losing Battle in the Netherlands

A few weeks ago, regulators in the Netherlands ruled that Apple must allow dating apps to integrate 3rd party payment solutions into their apps. Exactly what Epic was fighting for last summer. But only dating apps. Why? I'm not exactly sure... But that's old news.

Apple has since conceded and said they'd allow it but will continue to charge developers a fee of 27%. If you're familiar with payment processing, you know the cost is usually more than 3%, so this isn't really a discount but rather a penalty.

The regulators didn't like this and announced a fine of €5M for every week Apple doesn't change their terms.

I think this was a pivotal moment for Apple, and they dropped the ball, which will have a direct impact on the entire industry. 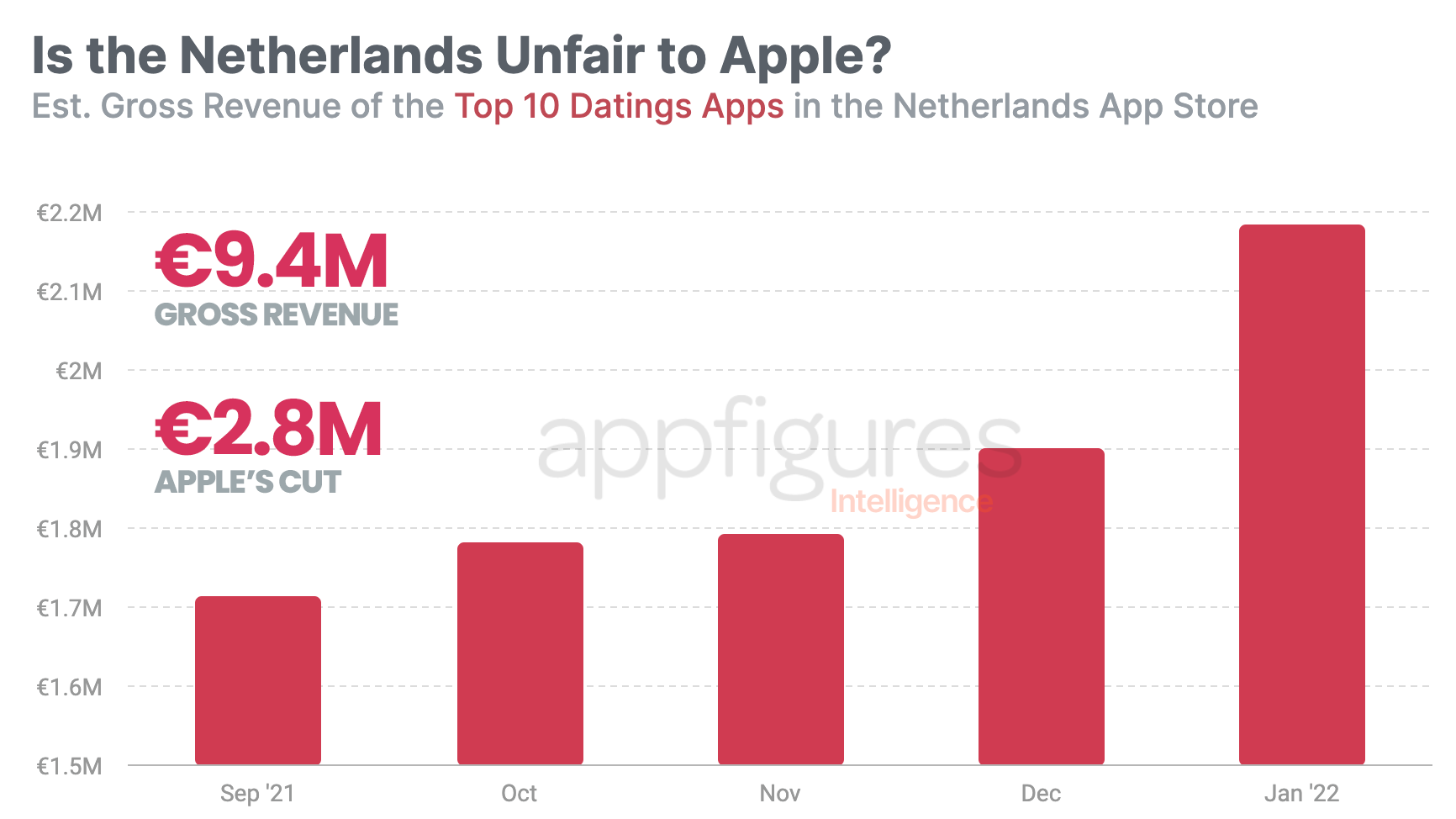 How much money is Apple making from dating apps in the Netherlands? And, is it enough to cover this new fine?

I summed up the gross revenue of the top 10 dating apps in the Netherlands for Q4 of 2021 and January of 2022, so we can see. And since the fine is in euros and not dollars, I converted all of the numbers here to euros for easy comparison.

Between September and January, the top 10 dating apps brought in €9.4M of gross revenue as per our estimates. Reminder, euros not dollars.

Of this, Apple's 30% fee nets out to roughly €2.8M. By this calculation, a week's worth of fine is about the same amount as Apple earns from dating apps in an entire year in the Netherlands.

I suspect regulators had access to this data, and the number wasn't a random guess.

Personally, I think Apple really messed up on this one. Without getting into the main issue, which is whether 3rd party payments should be allowed into the App Store because that's a much bigger conversation, this 3% discount feels more like an insult. And that wasn't even it!

The other requirements to use out of store payments are that the developers ship a separate app and also warn their users with a very specific message crafted by Apple. Another insult to developers.

It's these insults that will anger even more regulators, in my opinion, and will lead to tougher regulations on Apple, which will ripple across our industry.

Bumble has announced its first acquisition earlier this week.

Fruitz, the company Bumble will be acquiring, is a dating app based in France. If you aren't familiar with Fruitz, it's a dating app that's popular with the younger crowd and comes with a twist -- you can communicate your intentions with fruit emoji.

The idea is that you don't have to spell out what you want but rather use one of four fruits to indicate it. I'd say people are getting lazy, but I think that ship sailed a long time ago.

Do people actually like this concept? Let's have a look at downloads. 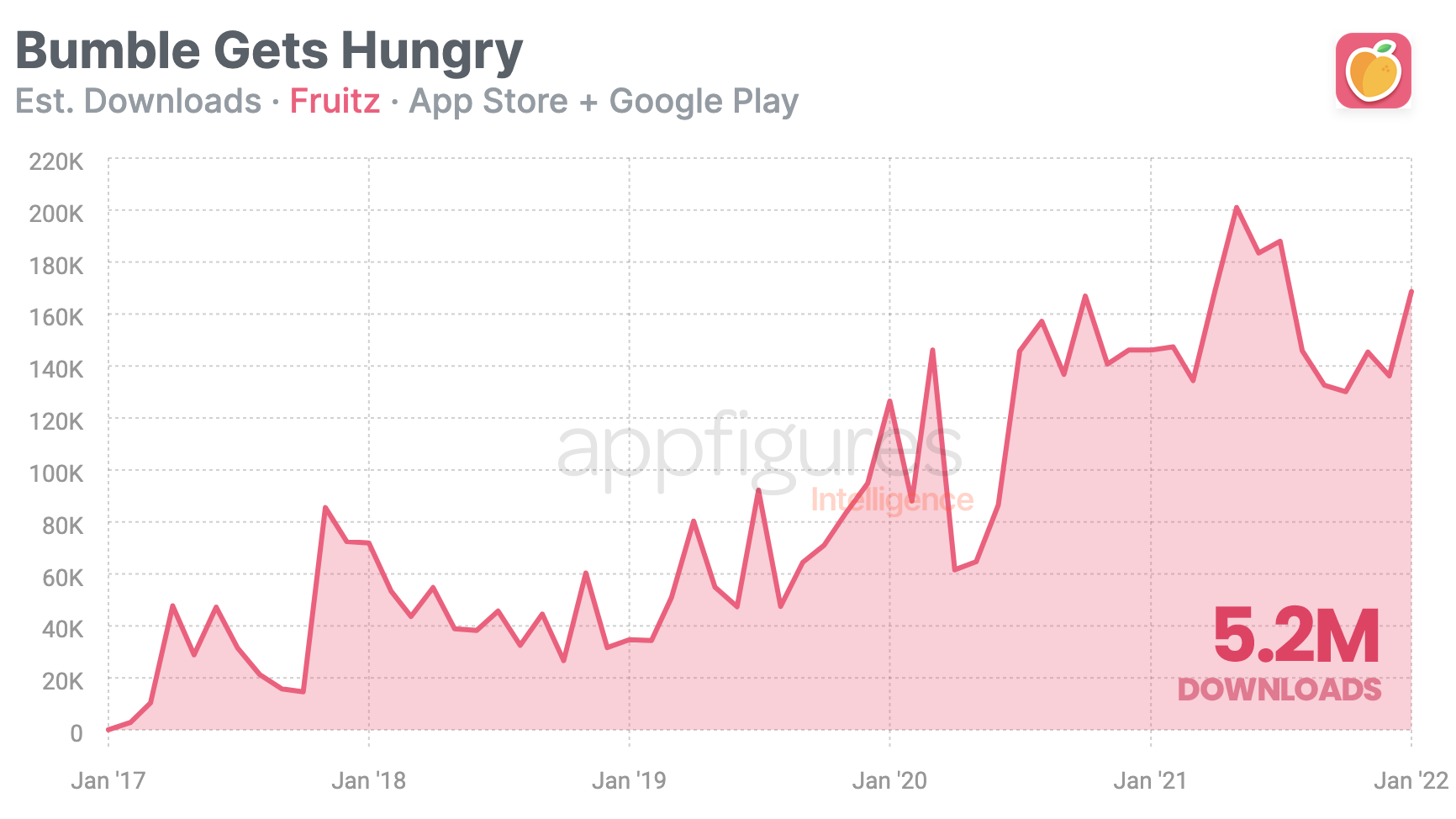 Since its release in early 2017, Fruitz was downloaded more than 5.2 million times across the App Store and Google Play according to our estimates.

It's most popular in its home country of France, but has users in the hundreds of thousands in Canada, Belgium, and the Netherlands.

Match has been quietly consolidating over the last few years, so for Bumble to make moves, it has to go beyond the popular.

The real question is what it'll do with Badoo, the other dating app it owns through a reverse acquisition. It's unlikely that it'd sell it because there isn't a buyer that isn't a competitor. And if it needs to keep it, how will that help (or hurt) its European expansion?

Question - Should I do a more in-depth report on just dating apps? Would you read it if I do?

The last few months have been busy for the top streamers in the US. Hits like the Matrix Resurrections and Encanto have been driving record revenue and even a lawsuit for HBO Max.

I've talked about these two and the category as a whole quite a bit last year, and if you remember, there was no clear winner when it came to revenue, last year.

That seems to be stabilizing lately, and one app is starting to show a commanding lead. 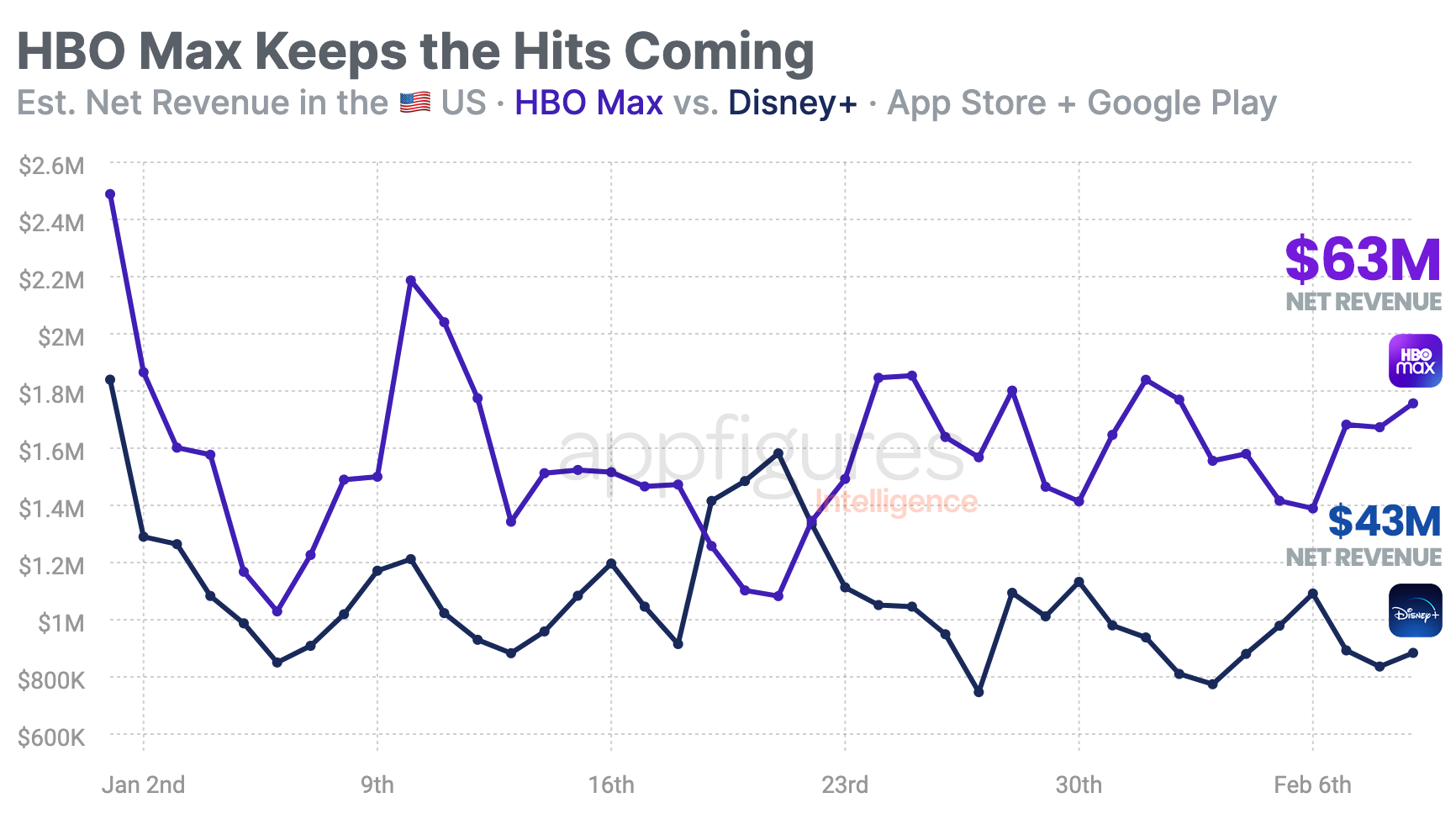 According to our estimates, that app is HBO Max, which added a whopping $64M of net revenue to its bottom line so far in 2022. Disney+, which led more than followed last year, added $43M of net revenue in the same period. And that's from both the App Store and Google Play.

What's more interesting is the stability you see in the trend.

Last week the makers of the Matrix sued HBO Max for releasing the movie for streaming at the cost of lower box office sales just to drum up subscriptions. Black Widow's Scarlett Johansson sued Disney+ for streaming the movie and cutting her out of revenue last summer.

It all makes sense. The losses streaming is now incurring, when compared to the more traditional box office revenue, is a small price to pay for becoming the leader once things stabilize and competitors will no longer be able to take a loss for growth.

For now, I don't think the losses will end, which means it's us viewers who ultimately win.

Peloton hasn't had it easy in 2022. The maker of workout equipment had a wild pandemic ride. Demand for its overpriced equipment skyrocketed as gyms shut down and most of us moved to work from home, around the same time it went public, and things were looking great.

But demand eventually wore off and sales started declining. Competitors started pushing their lower-cost equipment, and that all culminated with a massive loss of nearly half a billion dollars in Q4.

Now, there's talk of Peloton being sold, and Amazon is interested.

So that's a lot of not-so-great stuff. But there's actually something that is growing for Peloton and that's in-app revenue. So a potential acquirer could tap into that. 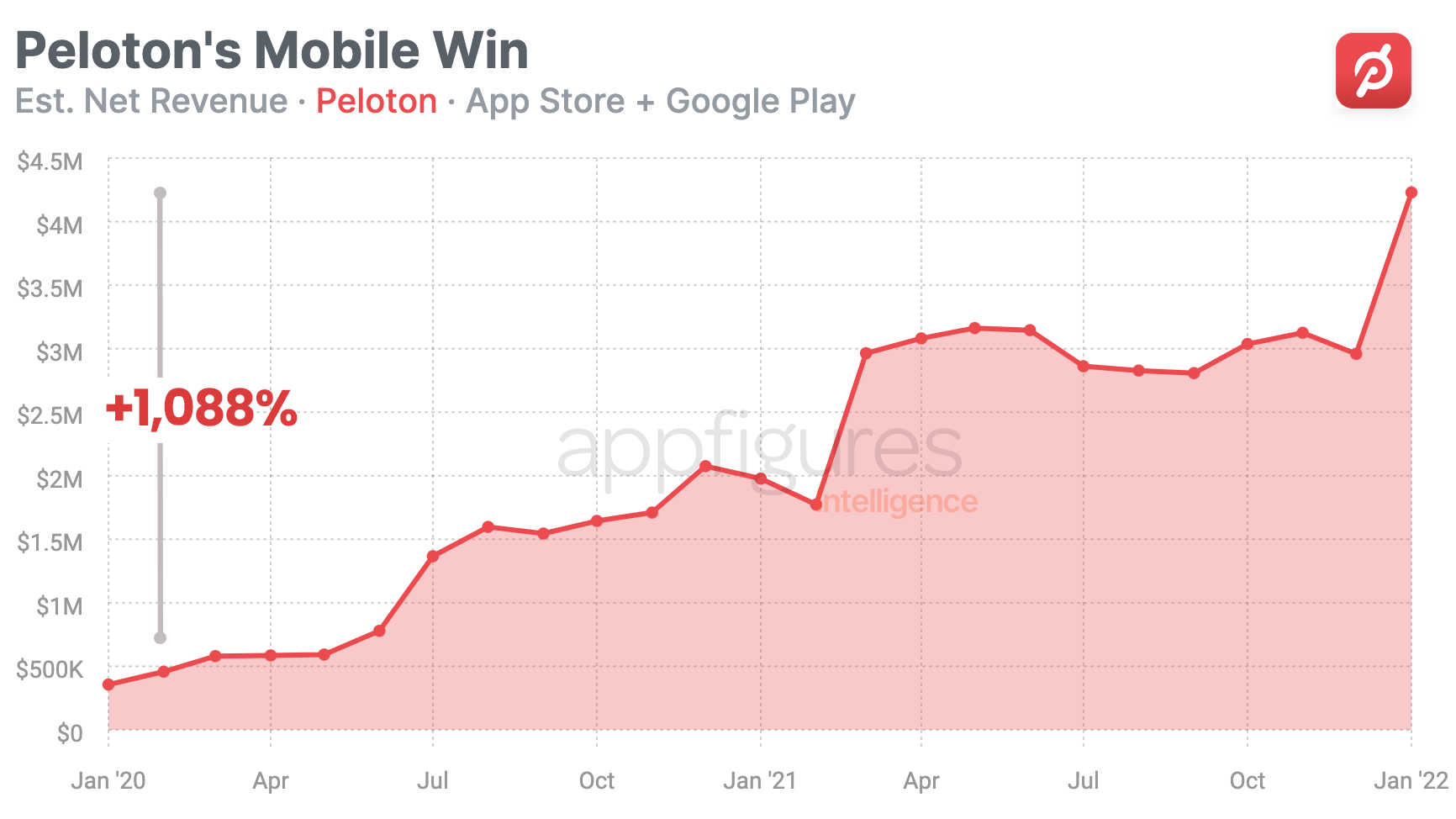 Peloton followed a trend many other fitness apps followed in 2020, they moved a lot of at-home fitness content into the app and locked it behind a subscription. Momentum doesn't build up overnight, but once it moves it's hard to stop, and that's what we see here.

In-app revenue rose more than 1,000% since the beginning of 2020. According to our estimates, Peloton added more than $4.2M to its bottom line. It's not enough to undo their losses, but if we look at it as a separate business--a content business--it's pretty lucrative.

There's a new face at the top of the charts this week. Prequel isn't a new app, but in the last few weeks inched its way up the top charts in the US and is now sitting just below Facebook and Instagram, and is the only "unknown" app in the top 10 that isn't Wordle. 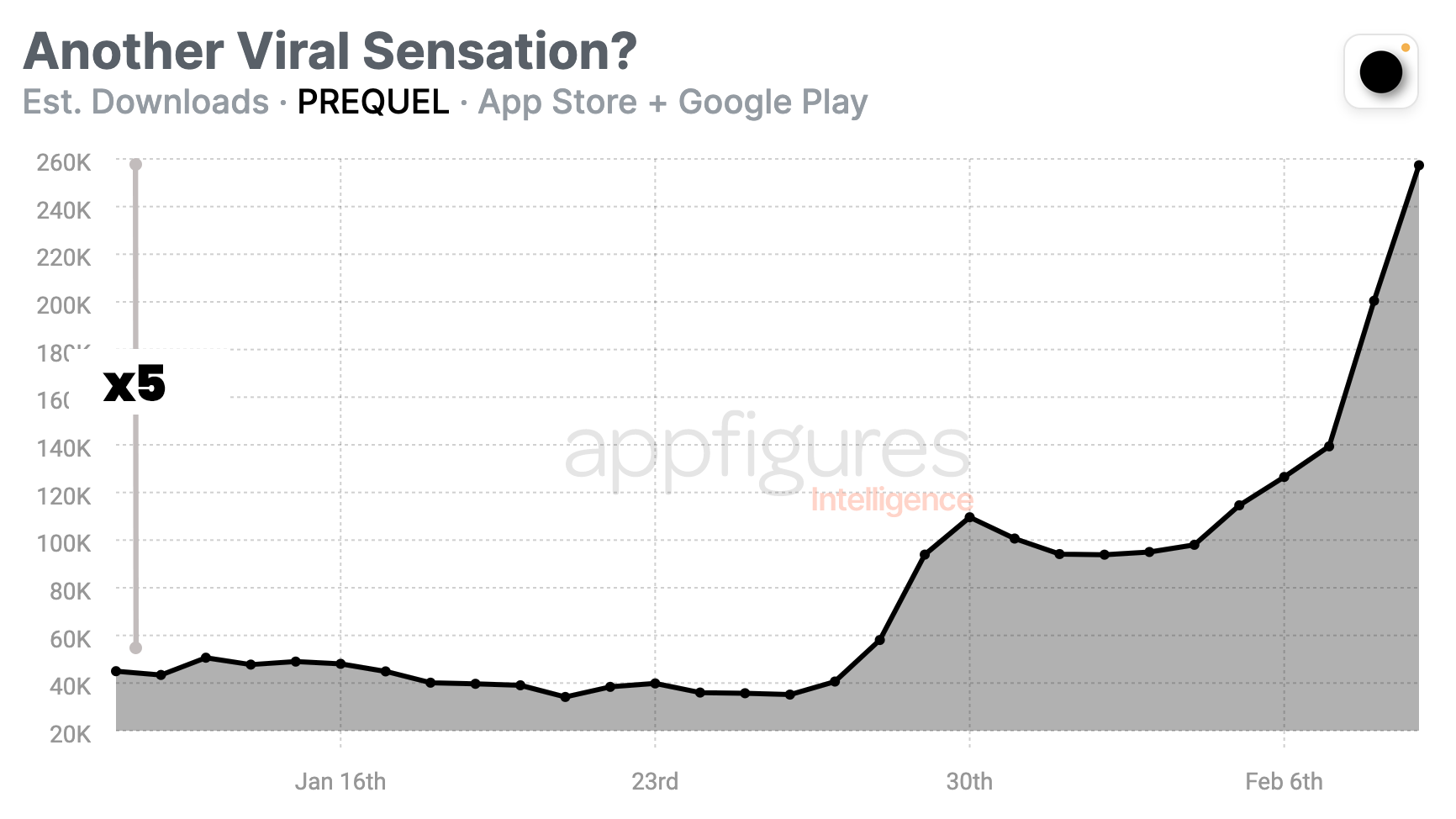 So what's Prequel? A photo and video editor that offers filters and effects to make those TikTok's better. It also does a pretty good job turning selfies into cartoons. Those cartoons have been floating on social media and fueling even more downloads.

Our estimates show that since the beginning of the year, downloads grew by a multiple of 5, from around 40K to more than 250K this Wednesday.

This is the third app in just a few months to "explode" because of social media, and it won't be the last. Why? Because it's so easy to follow an influencer these days that as a developer, all you need is a few mentions and you can be on your way to glory.

For some, this will happen organically by being at the right place at the right time, and for others it will come from promotional deals. But the end result will be the same.