Donald Trump has officially joined the social media platform race this week with the public rollout of his platform, Truth Social.

The app, which draws a lot from Twitter, finally opened up to the public this week and immediately appeared in the #1 spot in the US App Store. It's worth noting that it's only available in the US App store and nowhere else right now.

It achieved that success thanks to pre-orders, a feature of the App Store that allows users to subscribe to have an app automatically downloaded when it's released. 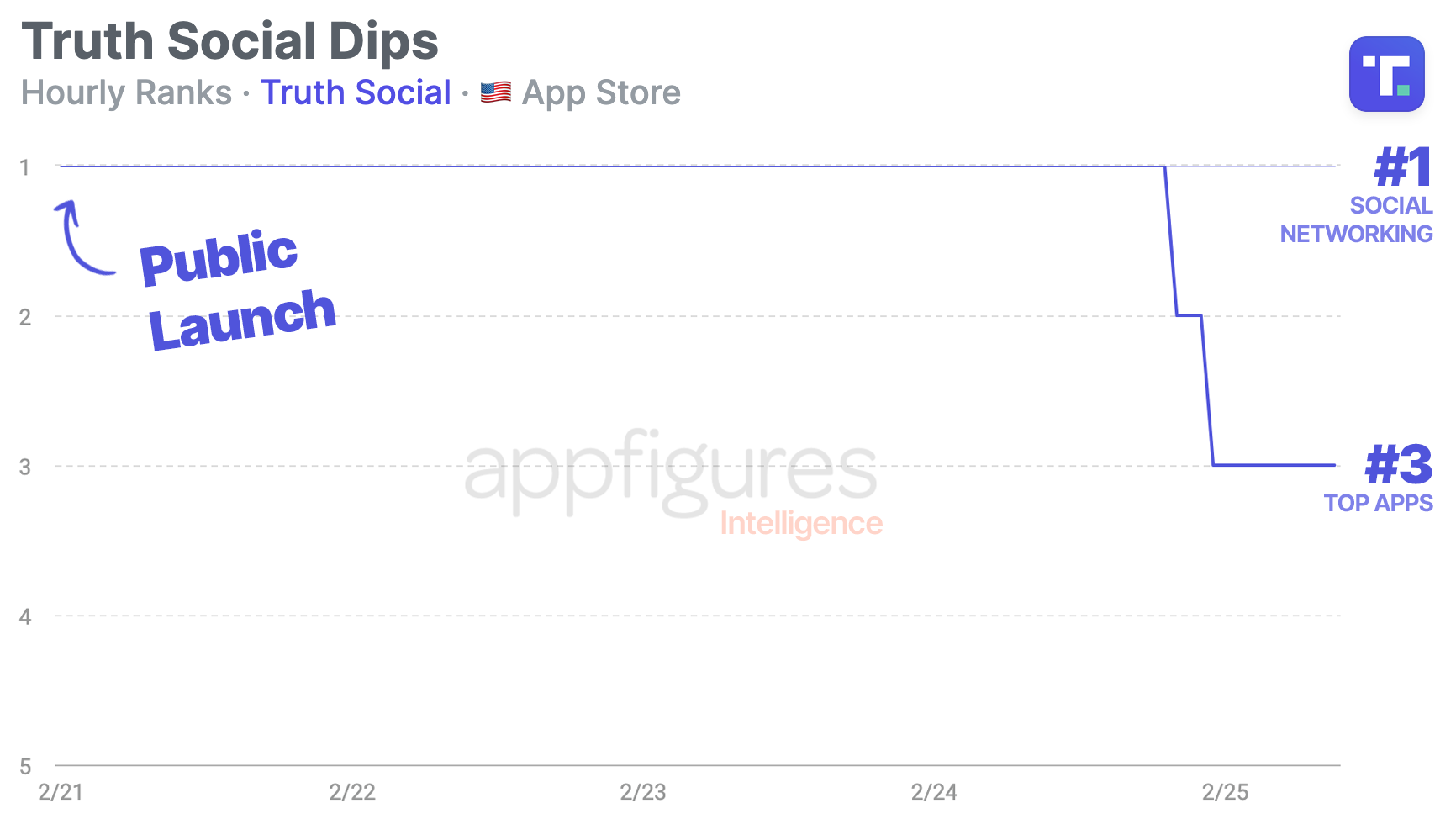 The app spent the majority of the week in the top spot, first thanks to pre-orders and then thanks to the wild amount of news coverage it received. As of this morning, it's lost its top spot and is now sitting in #4.

Because there is no Android side to this app, a clone made its way to the top of Google Play earlier in the week. However, it's been pulled since.

We estimate that in its first week in the store, including Friday (I'm forecasting a bit), Trump's Truth Social app was downloaded more than 1 million times.

I was curious to see how that compared to downloads of similar social platforms that launched over the last few years, so I compared the total downloads of Truth Social, GETTR, Rumble, and the original, Parler. 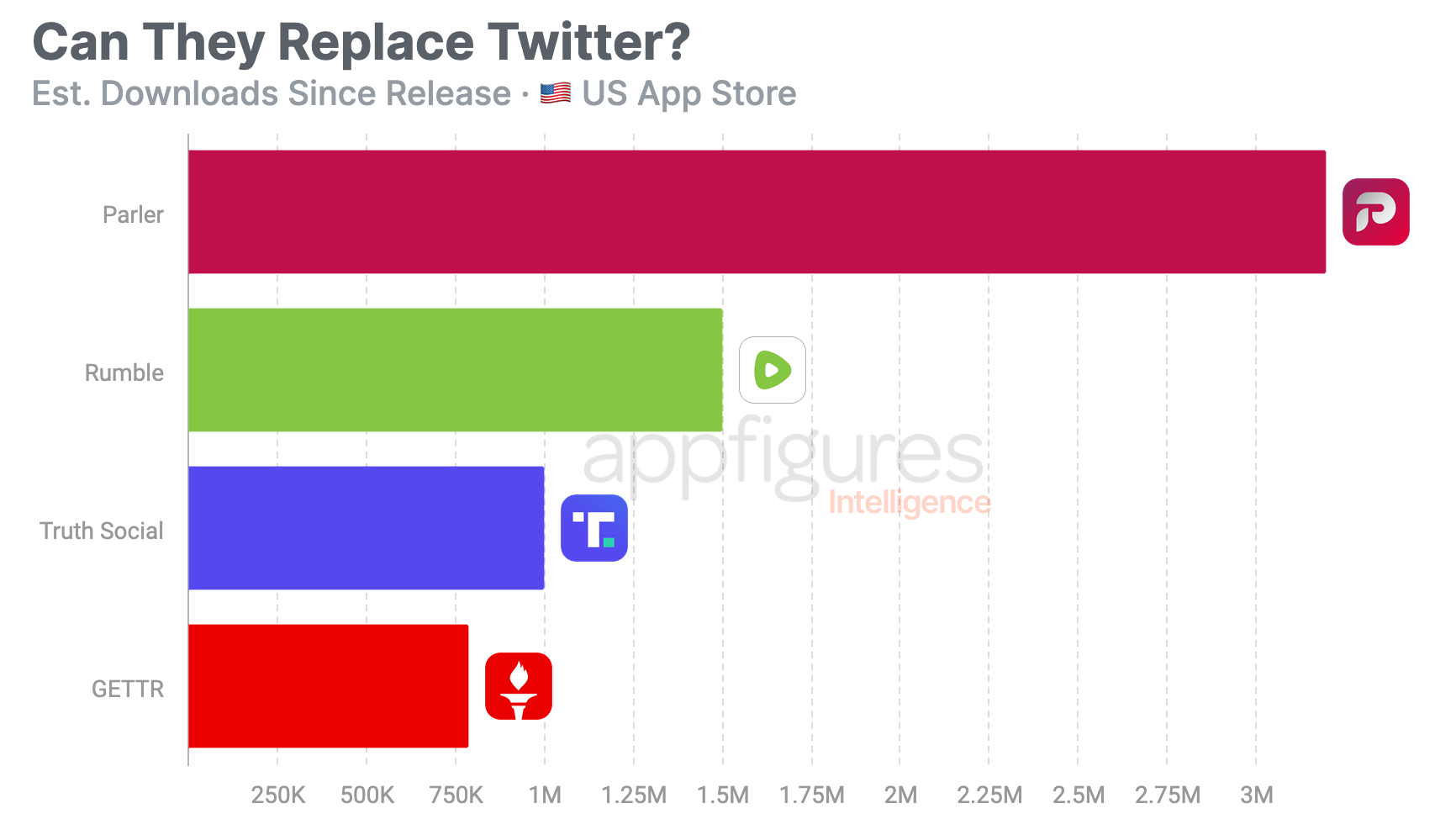 To make the comparison fair, I limited the data to focus only on the US and only on the App Store.

Truth Social ranks third in the list of all-time downloads, which is led by Parler with more than 3.5 million downloads. And if you're thinking, where are all these Parler downloads from last year, those included Android and other countries. GETTR is in a similar boat where there are a lot of international downloads and mainly from Android devices.

But Trump's app isn't available internationally or on Android.

The marketer in me questions the decision to focus on the App Store, but politics make little sense, so I'm not going to continue that thought.

This is already getting longer than I'd like, but I'll end by saying that I'm very curious to see who will be using this app in the long term. Its description makes it clear the creators want diversity and not to become a silo like those other attempts at competing with Twitter, but is that possible?

With so much happening in the news this week, I had to look to see if the trend we've seen in the last few years with news apps continued.

That trend is that more users downloaded news aggregation apps, like NewsBreak and SmartNews, in times of unrest than apps from specific networks like CNN and Fox. 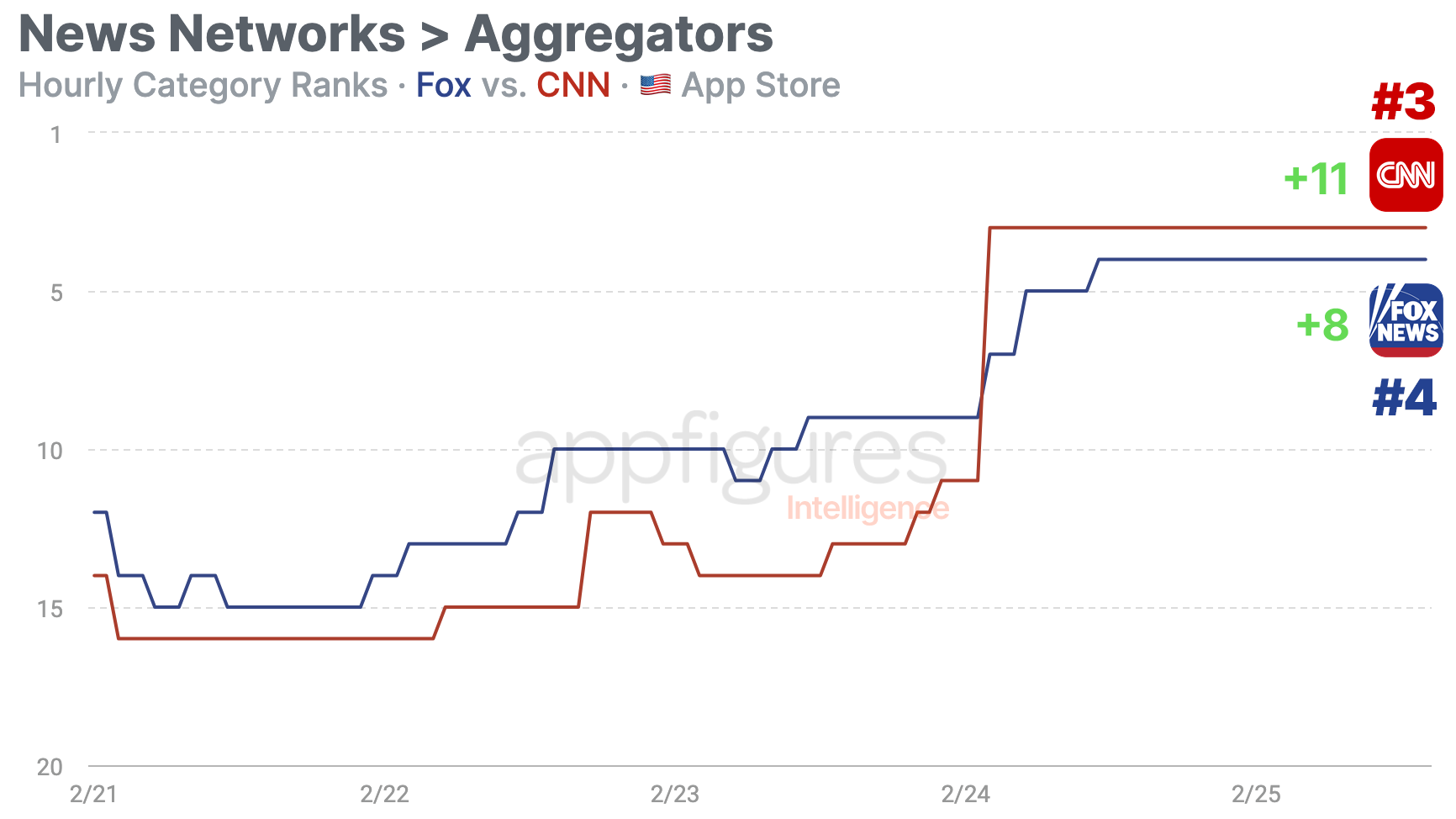 Downloads of CNN and Fox's flagship news app have increased over the last 48 hours, pushing them above news aggregation apps which are usually in the lead.

As of Friday morning, CNN is the 3rd most popular app in the news category in the US App Store. Fox is right behind it in #4.

Popular aggregator NewsBreak and SmartNews are currently sitting in #5 and #8, respectively.

I know some of you will respond telling me CNN is better than Fox and others that Fox is better than CNN. I'm not making any claims here about the two but merely comparing them together to their alternatives, which are news aggregators.

Why is this? It's hard to tell. I think it's a sign of the times we're in and how news, just like every other content out there, is opinionated. Aggregators miss that on purpose. But...

Above all of these sit Twitter and Reddit, the aggregator of aggregators. What differentiates those two is that they're opinionated aggregators. I hope you see the pattern here.

I was surprised to see news apps weren't at the top of the App Store and Google Play in Ukraine, given the current situation, but what I found instead makes even more sense these days.

Signal, the private messaging app that got a huge boost by Elon Musk last year, is now the most downloaded app in Ukraine. 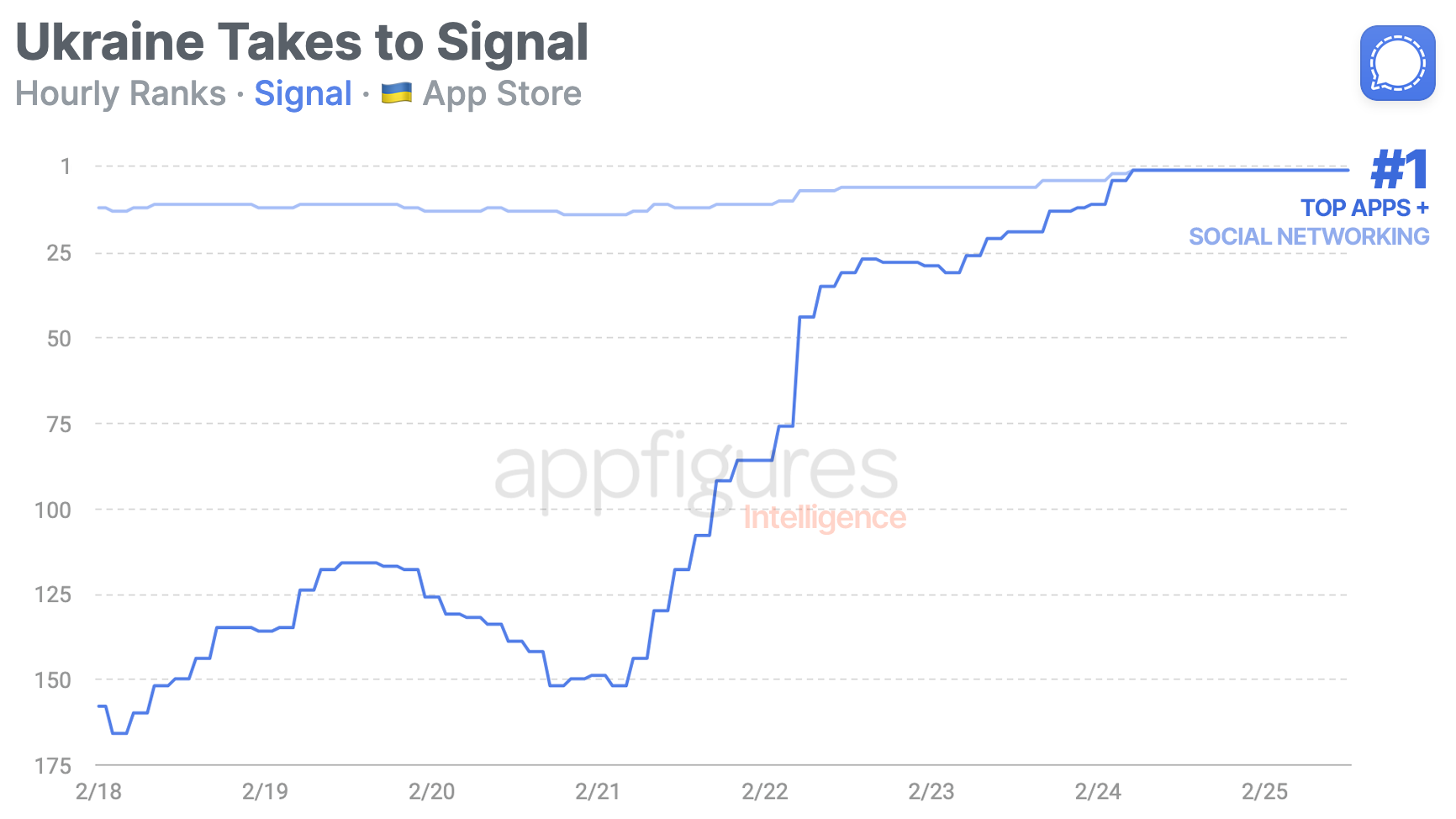 Over the last month, Signal has been climbing the ranks in Ukraine. Earlier in the month, Signal was ranking in around 150 in the Top Apps list in Ukraine's App Store. Since Monday, it's been inching up the list, first breaking into the top 100, then 50, and as of Thursday morning, it was the most downloaded app in the country.

It's been there since.

Interestingly enough, in the Russian App Store, it's Telegram that's at the top of the list. But that's not really new. Telegram has been a top 5 app in Russia at least since the beginning of the year.

It looks like Signal and Telegram might also join the battle, as some are warning now that Telegram isn't secure enough and can be used for spying on Ukrainian conversations.

4. The Mobile Index for Travel in Ukraine is Exploding Right now

The Mobile Download Index is a great way to understand consumption patterns for apps and games across countries and categories. We launched the index in early 2020 to measure the growth of downloads and revenue across stores, countries, and categories

FYI - It's free for app developers.

I looked over the index in Ukraine to see what's happening in the App Store in the months leading up to a war, something we haven't seen much of...

Here's the category with the most growth in downloads, and it makes a lot of sense. 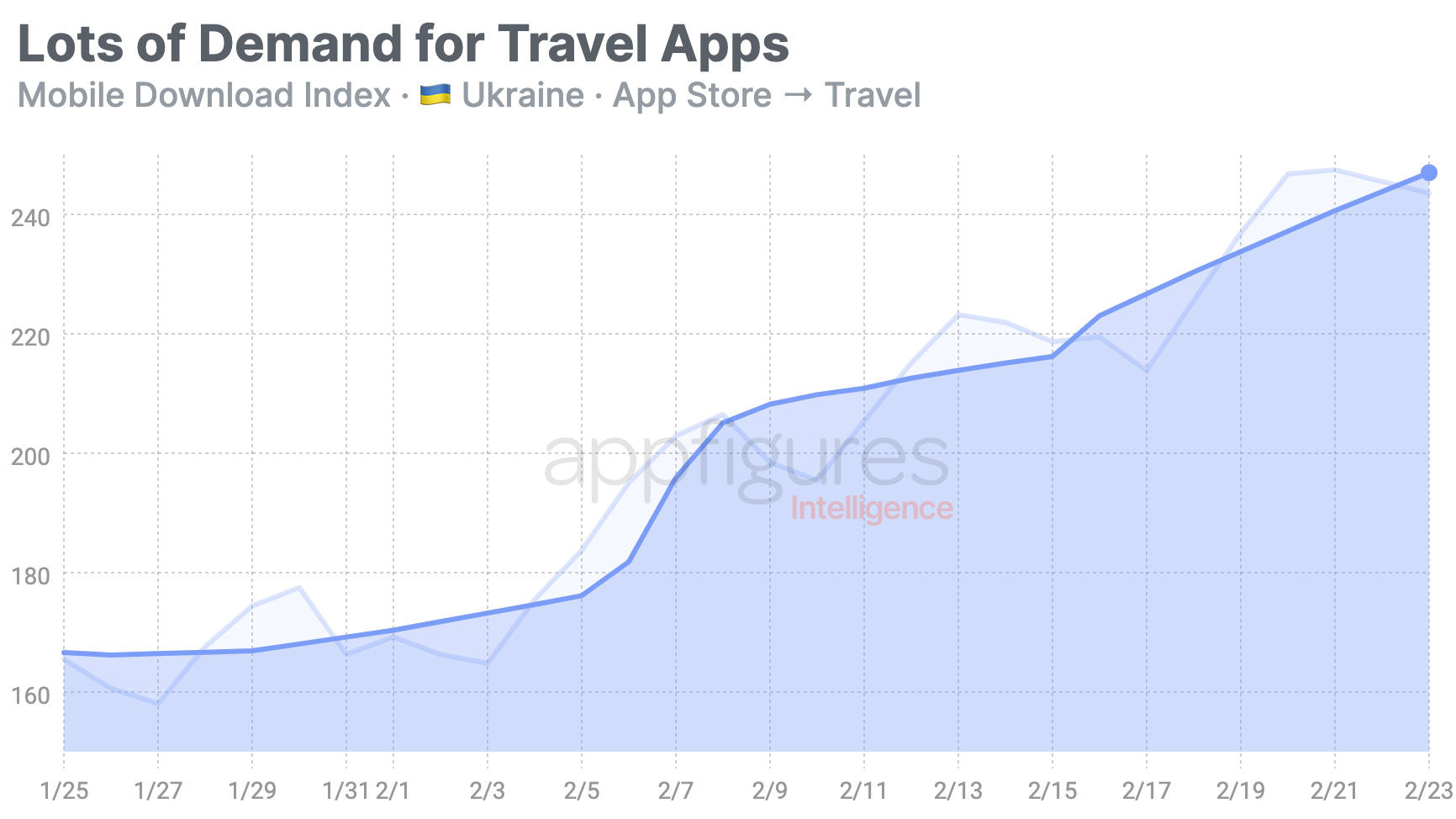 In the last 30 days, the Mobile Download Index for the travel category grew by 80.38 points, a rise of 48.2%. This means twice as many people in Ukraine are downloading travel apps as compared to earlier in the year.

The Entertainment and Social Networking categories have also been on the rise in the last 30 days as both contain apps that enable communication, which is essential right now.

Trends like the rise of Signal and reliance on apps for possibly life-threatening situations are now becoming the norm. It was somewhat the case in 2014, when Russia was at it originally, but now we see it full-scale.

I talk about ratings a lot in my Keyword Teardowns because they've become one of the most important components for getting discovered in the App Store and Google Play.

One thing I was very curious about, and the kind I don't get to see when analyzing keywords or apps, is the global volume of ratings. When I looked, I discovered the stores are getting close to hitting a new milestone. 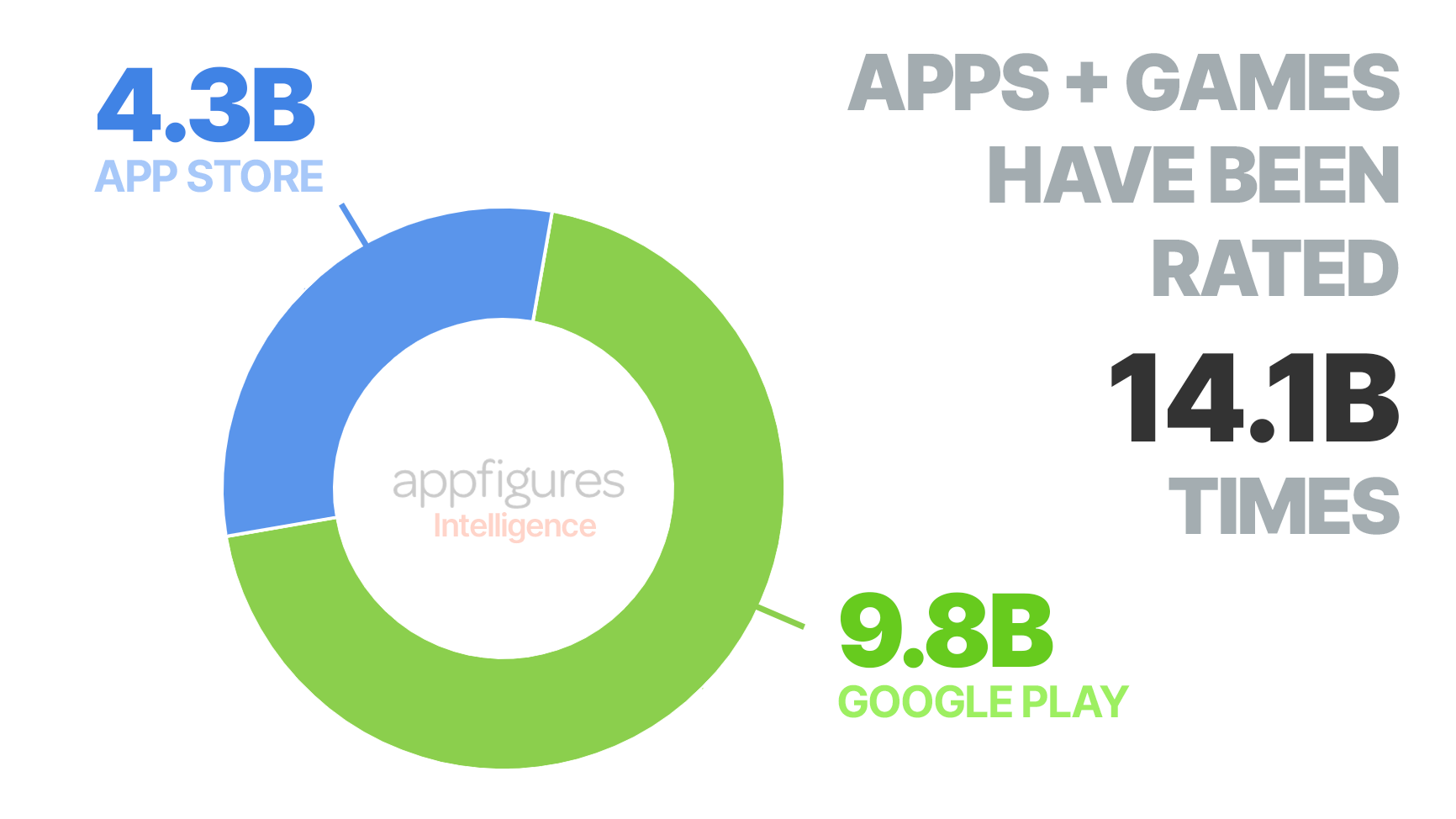 I summed up all the ratings for every app and game across all countries, and that total is now 14.1 Billion. Yup, billion, with a B. That's almost double the world's population (according to Wikipedia).

Bonus: the average rating is 4.09 on Google Play and 1.8 on the App Store. I didn't get these confused, I promise. I suspect the higher average on Google Play is a result of having many more apps that don't have a single rating, which I excluded from my calculation, vs. the App Store, where it's easier to get a few ratings and those bring the average down a lot.

Thanks to additions from both Apple and Google that enable developers to easily ask their users to provide a rating, I only see this total growing faster, stores relying on it more for discovery, and consumers relying on it more as a measure of popularity.

If you have an app or game out there, you'll need more ratings to stay competitive.