1. Where's the Other Wordle? 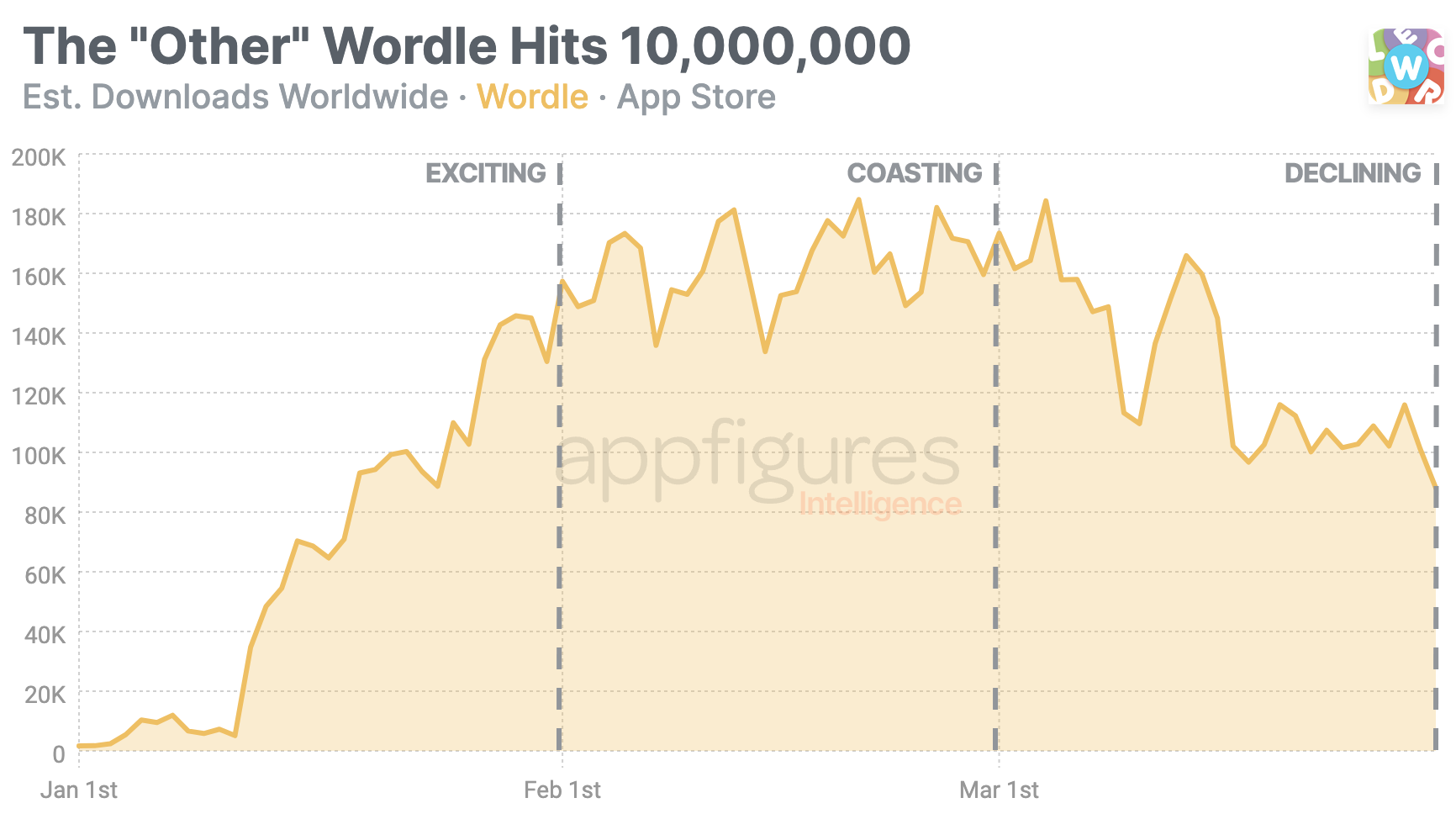 For a while there, it looked like Wordle was here to stay, and while that seems to slowly go away, there are a few things Wordle! did to get to this milestone and really ride the wave instead of being a silent observer (ahem, Among Us!).

When Wordle! rose to the top of the charts initially, it was a totally different game with a sleek 2016 look. It took the developer some time to figure out what's going on, but he eventually added a true Wordle mode, brought the design up to 2022 standards, and the most important thing, added in-app purchases!

The game also has the most annoying ads I've seen in a non-hyper-casual game, but I guess it can't all be perfect.

Ads aside, that's how you ride a wave, and that ride netted more than $800,000 in net revenue so far, or a little more than $1M in gross revenue, according to our estimates.

If you're a developer and you're reading this, my point here is that when good things come, it's not the end but rather the beginning. That's why tracking is important.

2. Twitter's Mobile Revenue Gets a Bump, But Is It Enough?

The good news is that it grew. 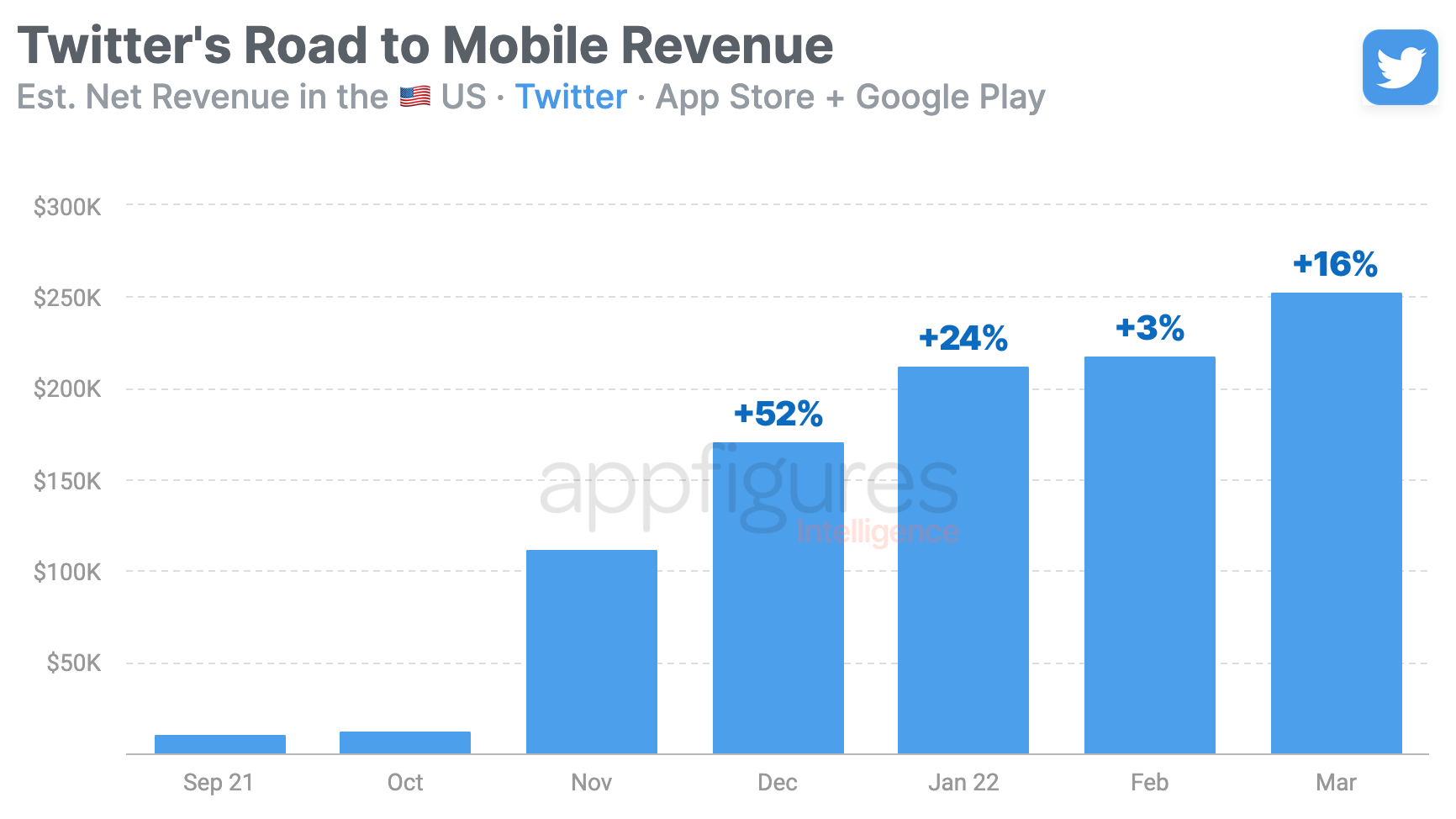 US revenue grew 16% in March, getting Twitter to a little over $250,000 of net revenue, according to our estimates. It's a nice bump considering the teeny tiny growth Twitter's revenue saw in February, but is it enough for this new revenue channel to become serious?

The way I see it, the correct answer is yes and no. Let me explain.

Yes - Twitter's users don't know it as a paid service. They're not used to it, and they don't expect to pay for tweeting. This means that it'll take time to get them used to it, and it'll also take time for the platform to evolve with monetization in mind. So, given enough time and effort from Twitter, this can become a serious revenue source.

No - This isn't really Twitter's revenue but rather the creators that monetize through Twitter. Every major platform is competing over creators right now, and most other platforms already have both the tools and demand for creators to get rich. Twitter is taking its time in expanding its creator pool, and losing potential creators in the process.

These two are very extreme, so I imagine the real future lies somewhere in the middle. A sign of this happening will be Twitter opening its program so everyone can become a creator and also adding more features to Twitter Blue, which will get its users more used to paying for what up until recently was a fully free platform.

Another week another app gone viral. Or, did I use this line already?

So many apps have gone viral overnight this year I can't promise I won't open with it again in a few weeks.

This week's sensation is TravelBoast, an app that generates pretty travel maps to share on social media. Or, as the developers say, "Indiana Jones style". 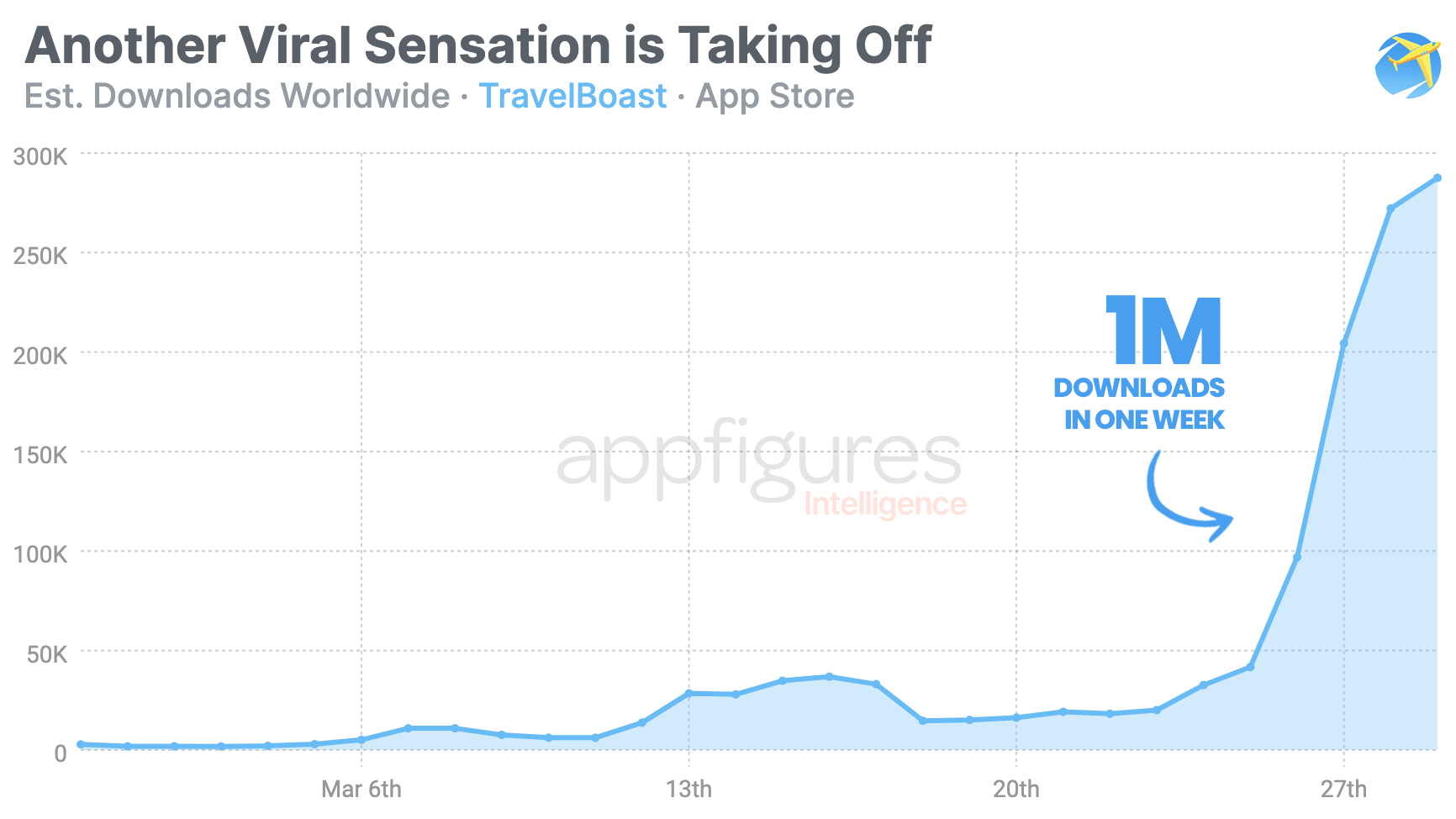 It is pretty cool looking, but how many people actually travel and want to share animated maps of them to Instagram?

Looking at the numbers, a lot!

We estimate that in the last ten days, which is when the app started rising, TravelBoast added a million new users from the App Store. it's not on Google Play just yet.

The app, which was released in 2019, saw another big spike last summer. That spike, however, was about half of this one, adding 136K downloads, according to our estimates.

Although the app is no longer at the very top of the App Store, which means downloads have declined, it's still in the top 10 in the US, so demand is still high.

Many apps that go viral sit by idly and enjoy the downloads instead of taking advantage of the opportunity and riding the wave. Which do you think will happen here?

4. Who's Leading the Mobile Payments Race?

Last week I looked at how mobile banking is giving traditional banks a run for their money. Pun only partially intended. This week I'm going to show you another area where phones are replacing the old-world – mobile payments.

If you've been using the internet as long as I have, you might remember days when PayPal was the most popular way to pay online. Although PayPal has an app, that's no longer the case.

It hasn't for a while. 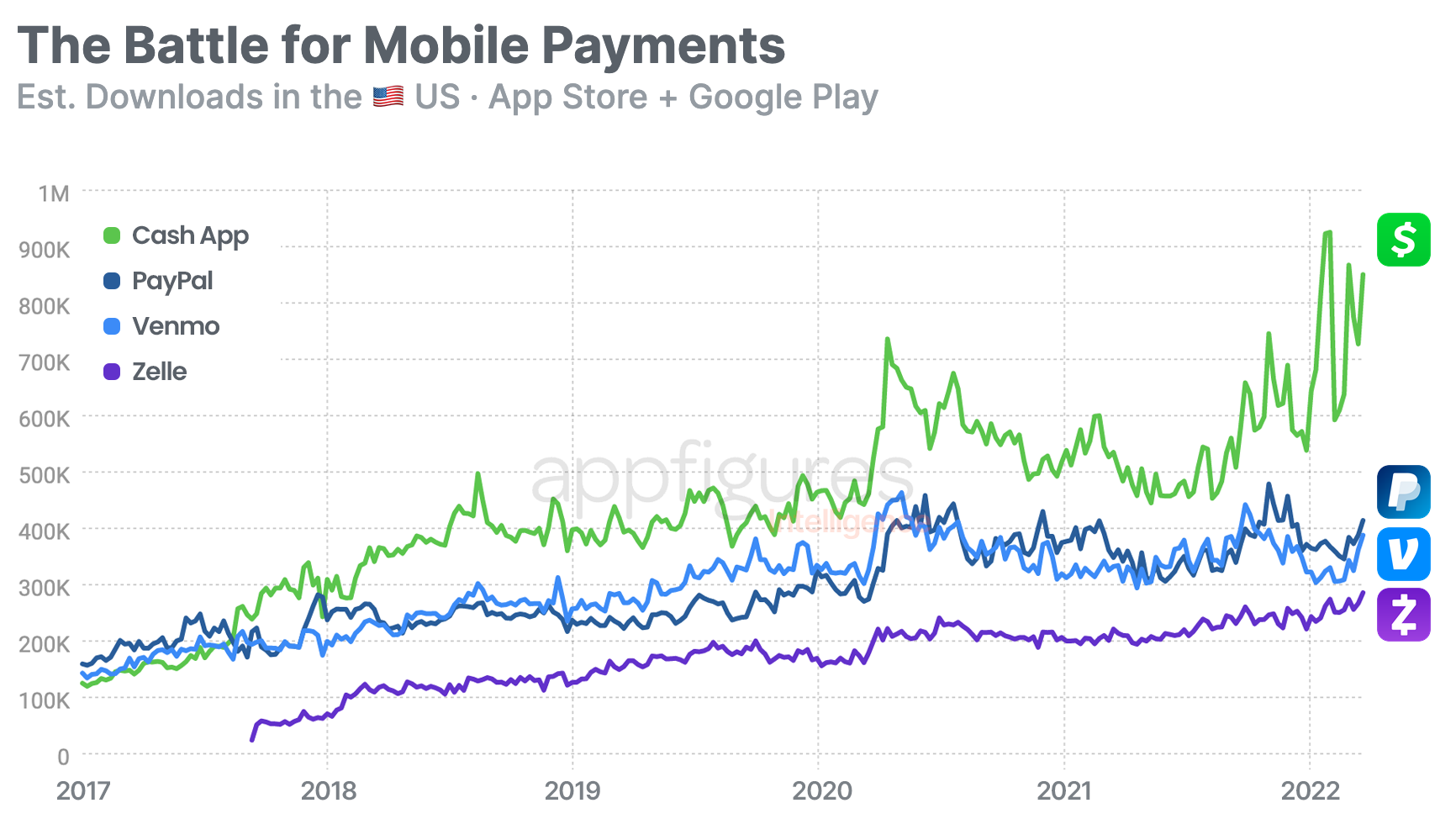 Cash App, from Square, is now, and has been for quite some time, the leading mobile payment app. So far this year, Cash App was downloaded by 9.5M people in the US Across the App Store and Google Play, according to our estimates.

By comparison, rivals PayPal, Venmo, and Zelle saw 4.6M, 4.1M, and 3.2M downloads in 2022 in the US, according to our estimates. Only a tiny bit more than Cash App when combined.

Cash App's simplicity has made it an easy go-to for millions. And that's really the key here – simplicity.

Although Cash App is the popular choice, all other rivals have grown steadily over the last few years. Not as much, but each has a very powerful company (or bank) behind it, so I don't doubt they'll continue to grow. But they'll need to become simpler.

Sitting at the top of the Ukrainian App Store right now are three language learning apps that have slowly risen to the top in the last few weeks.

Busuu, Duolingo, and Drop are currently some of the most downloaded apps in Ukraine. 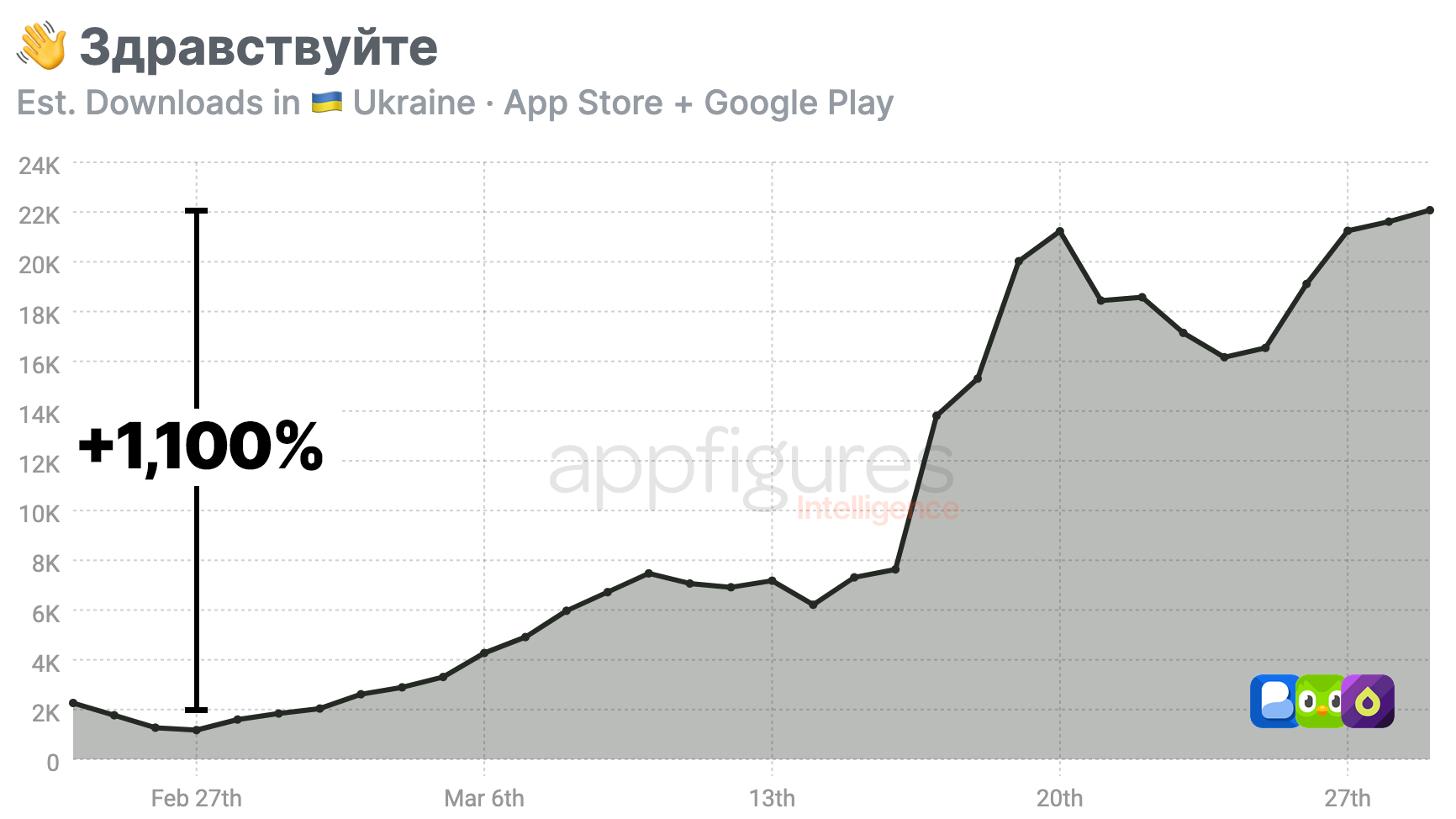 And it's not just local demand from Ukraine but rather international demand for learning Ukrainian. Duolingo reported an increase of 577% in the number of people studying Ukrainian on Duolingo.