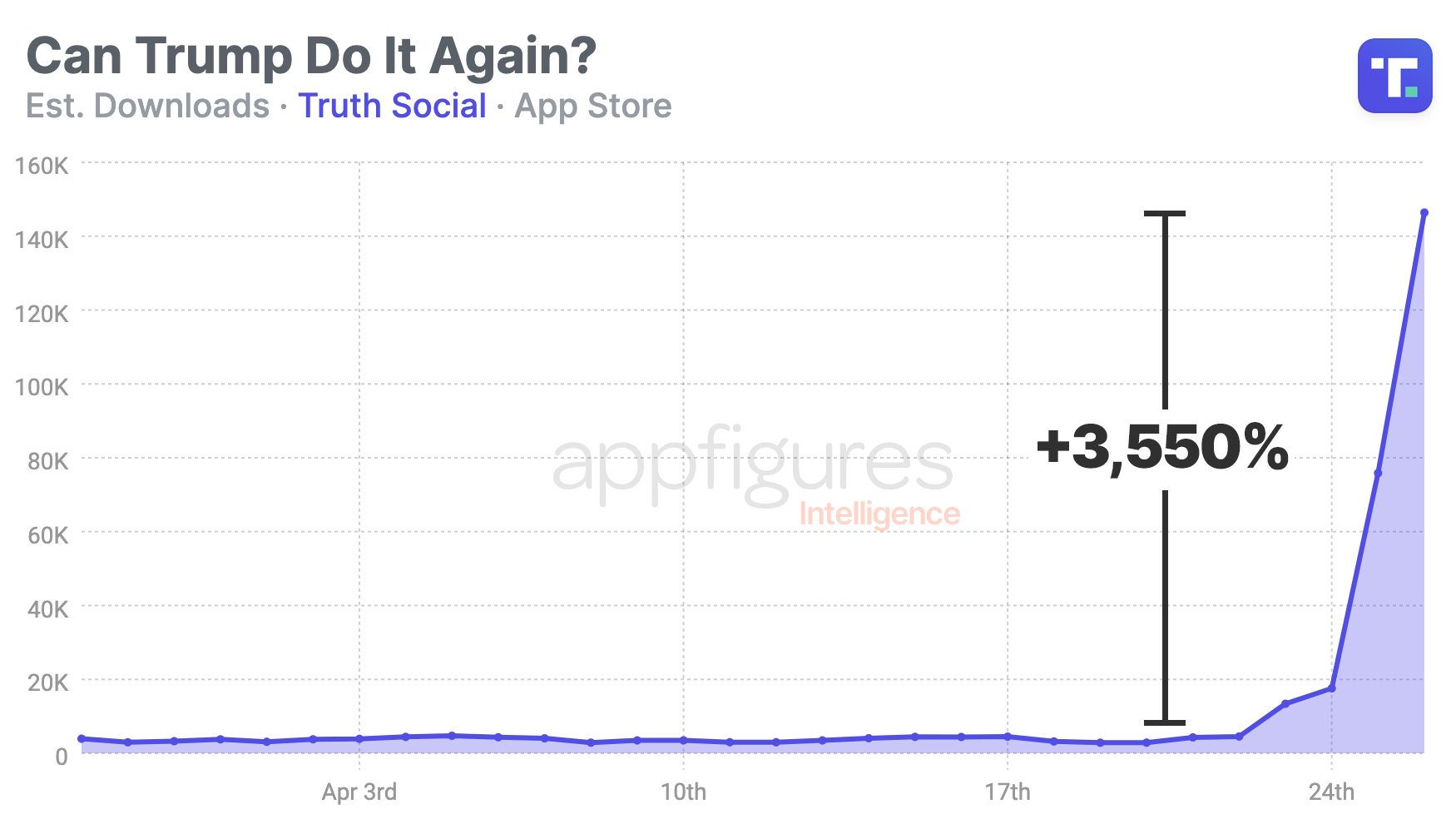 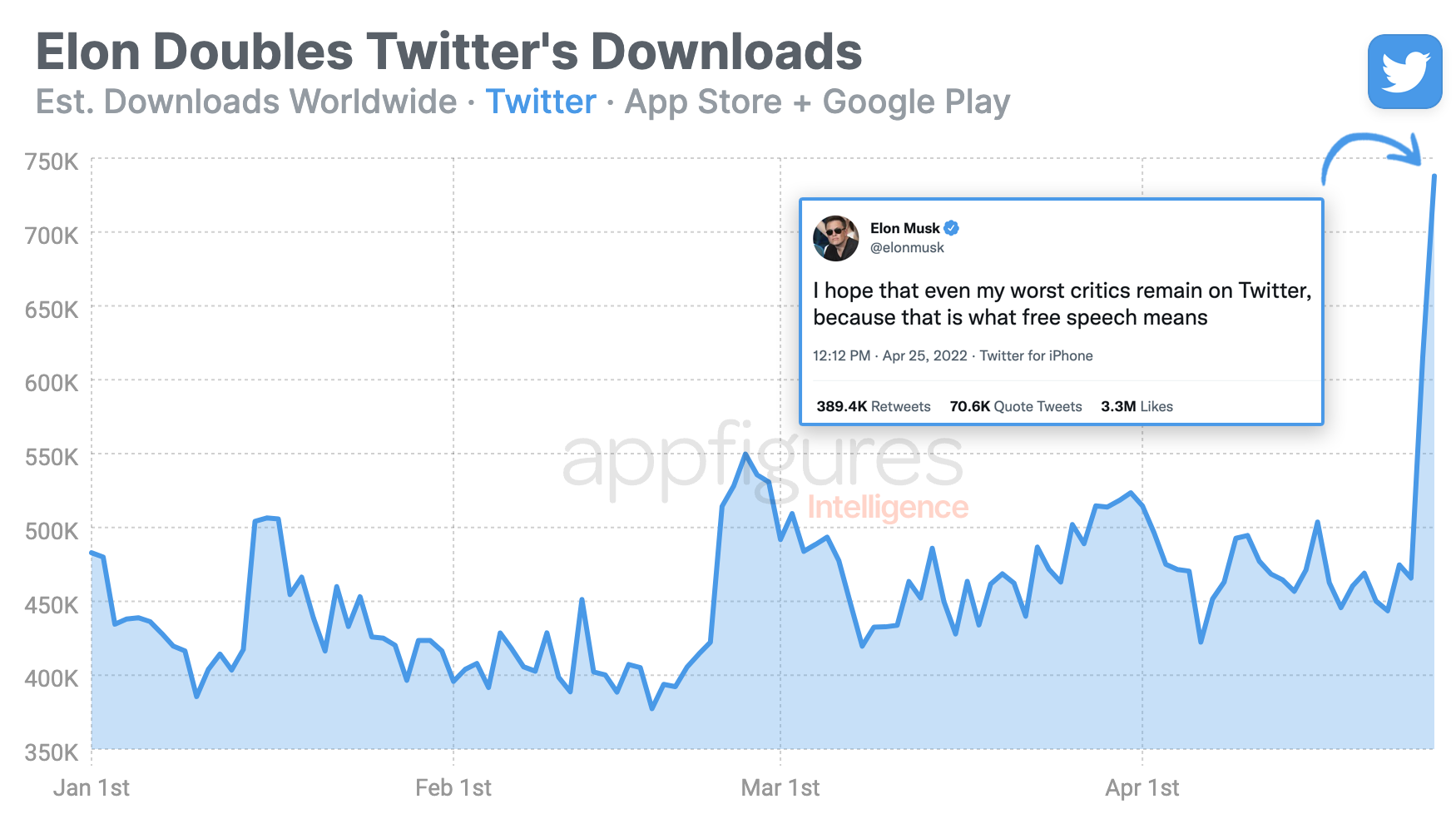 3. Apple Gets Ready to Eliminate Almost 30% of Apps in the App Store 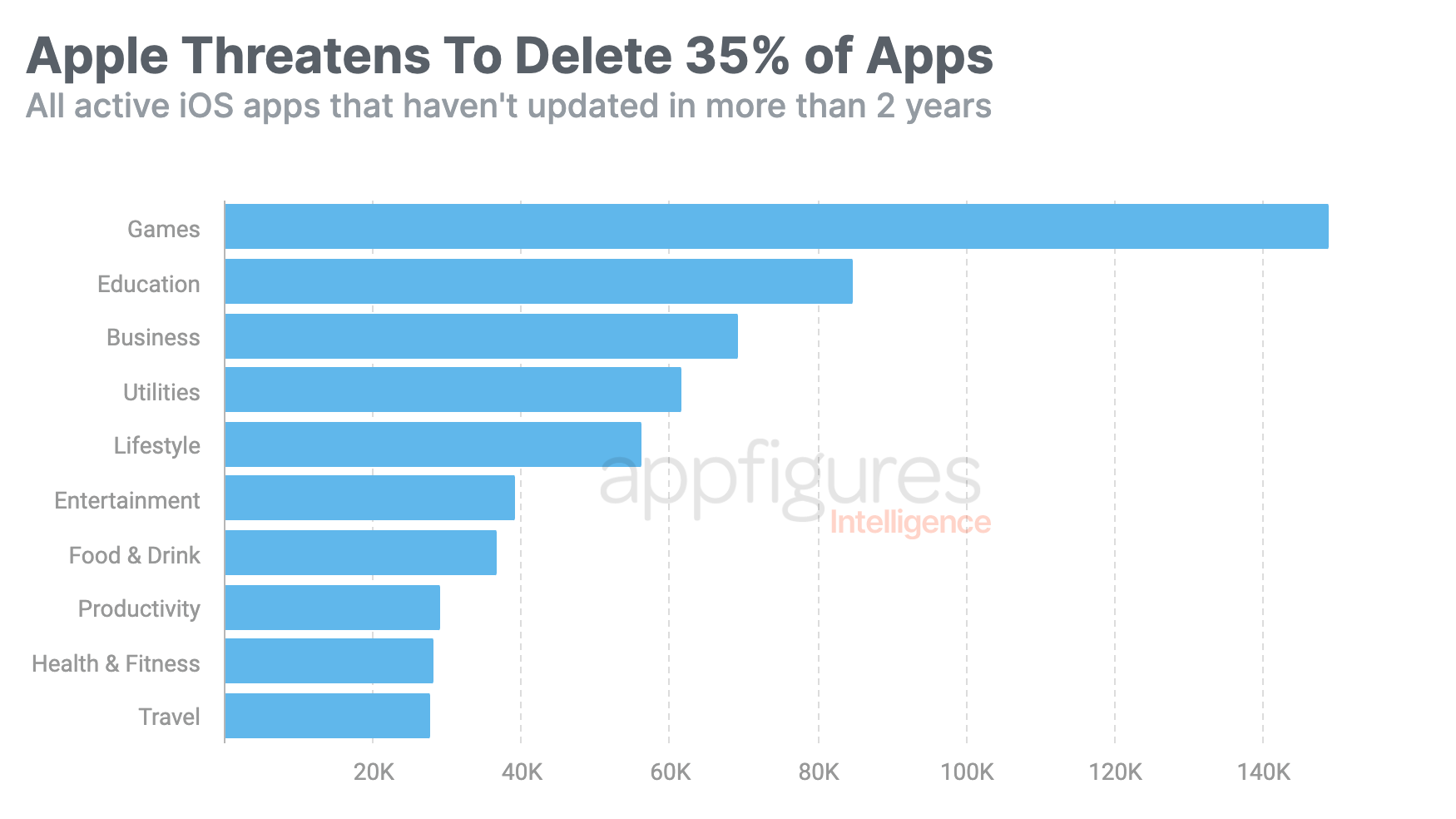 One of the apps Apple isn't sweeping any time soon is Hinge, the dating app that's been chasing big swipers Tinder and Bumble. And the chase is strong. Especially when we look at revenue. 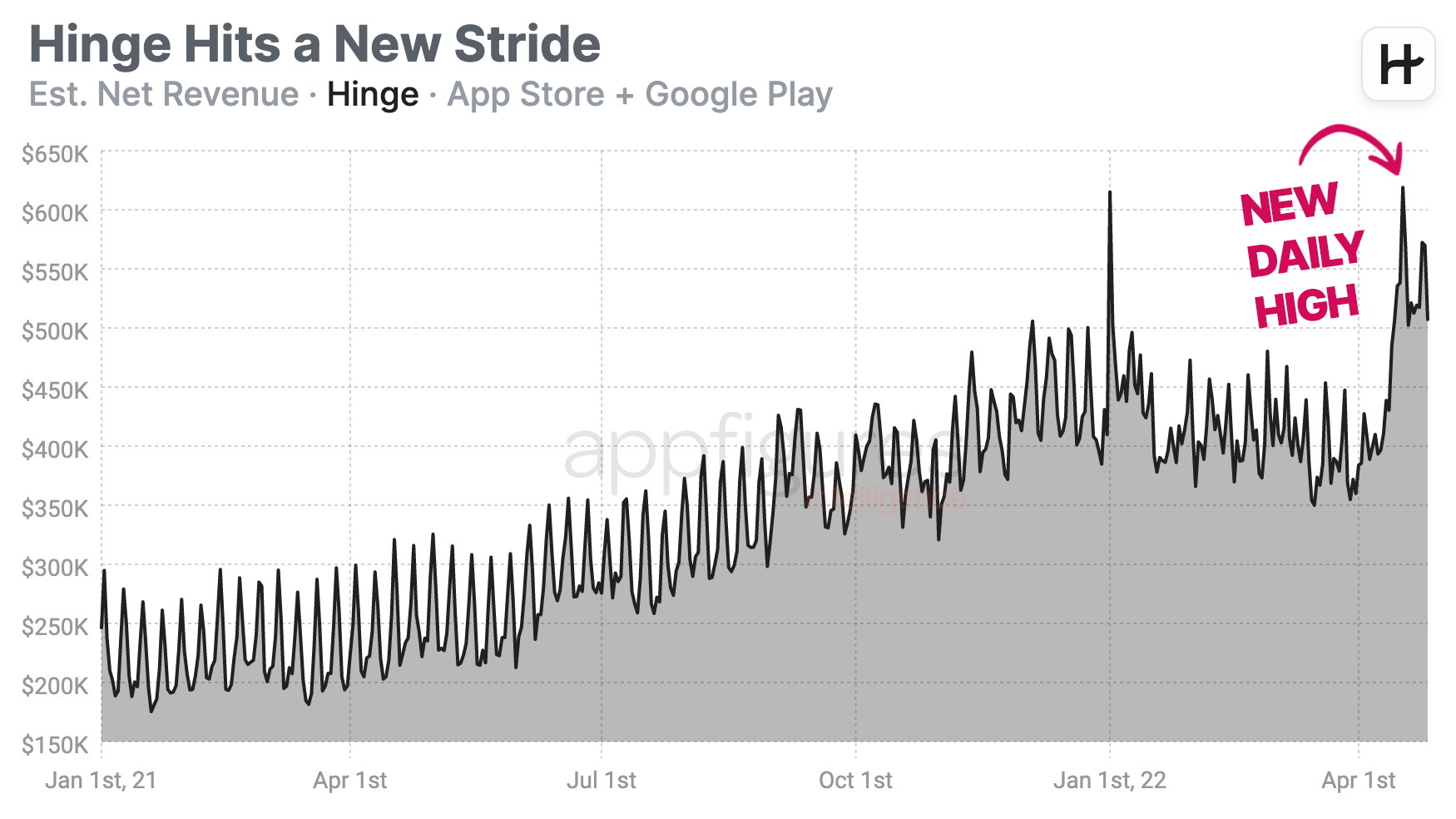 According to our estimates, Hinge set a new record for daily revenue last Sunday with nearly $620,000 of net revenue globally, though primarily driven by the US. For context, Hinge's daily average in March was around $410,000. That's an increase of more than 50% from March.

Hinge set its last daily high in January, the day when parental pressure forces many single folks to unlock unlimited swipes to find love, or get their parents to leave them alone. One or the other. 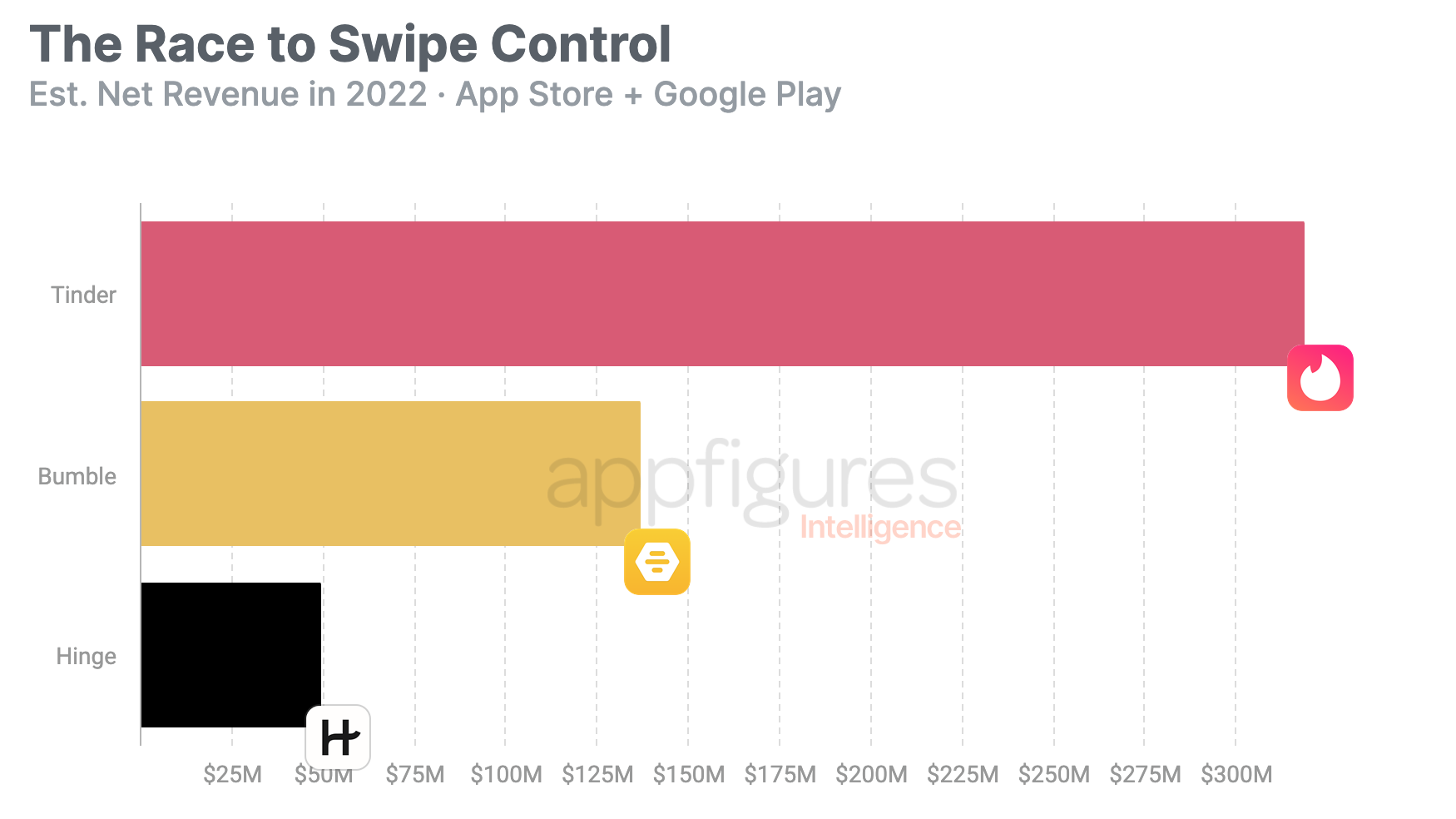 Although commendable, Hinge has a long road to travel before it can catch up to its swipey rivals Bumble and Tinder, who operate at what feels like a different level. Bumble earns more than 3x what Hinge does on average every day, and Tinder more than doubles that.

It's been a while since we looked at how apps that were hit the hardest by covid lockdowns are faring. I'm happy to share some good news.

Airbnb was one of the apps that got hurt by covid lockdowns the most. It was doing so well in 2019, but then lockdowns made growth very hard, and downloads got cut by as much as 80%. 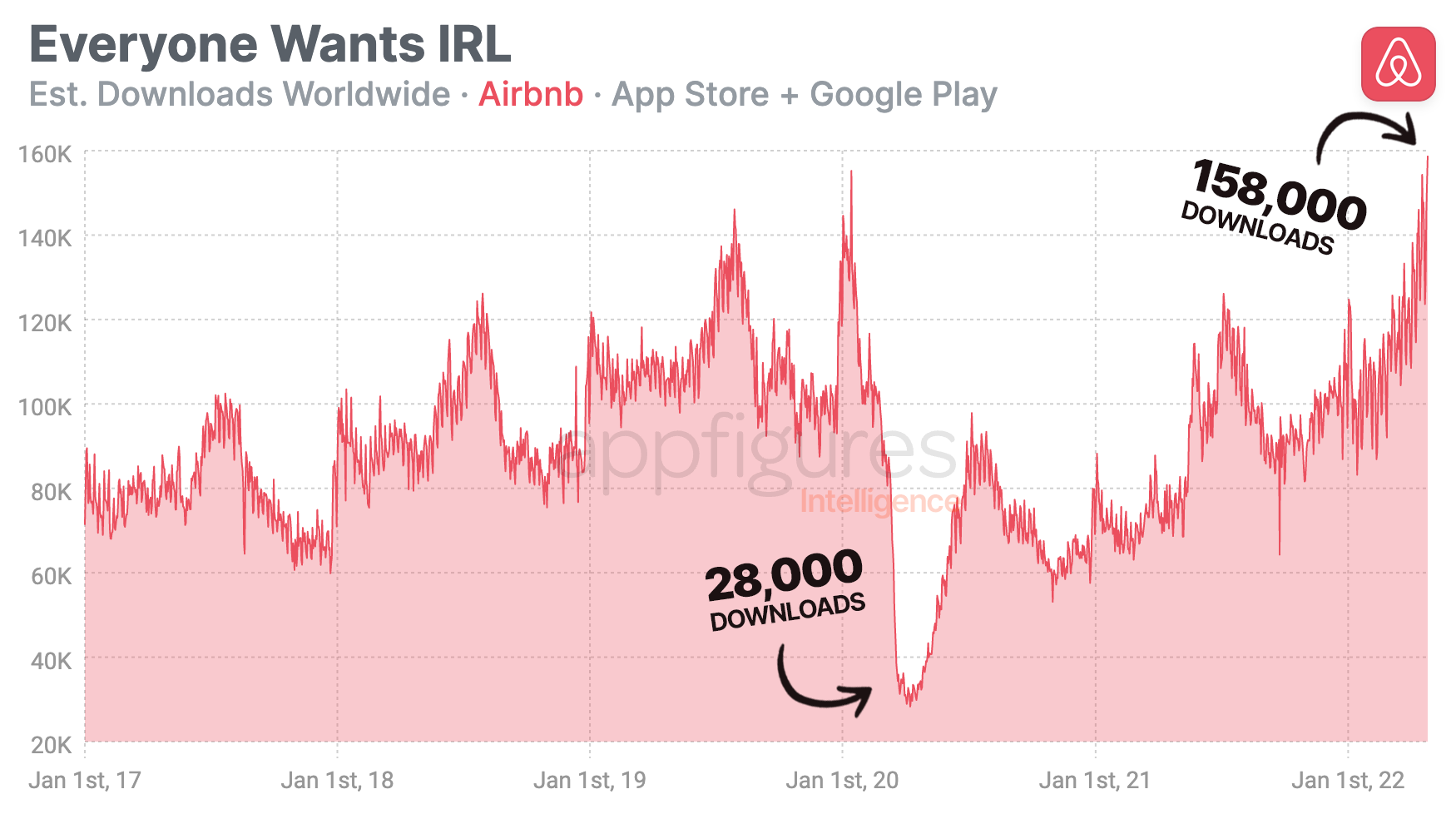 Airbnb spent most of 2021 rebuilding that growth, and as of this week, hit a single-day downloads higher than any day going back pre-pandemic.

2022 has been Airbnb's greatest rally!

Daily downloads have been growing steadily, and this Tuesday, crossed 158,000, according to our estimates. That's higher than any single day going back as far as 2017. The previous high was set in January of 2020, pre-pandemic.

I can't guarantee this crazy growth will continue forever, but having looked at many other apps that suffered, I don't think it'll stop any time soon. The demand for IRL is back, and it's strong.