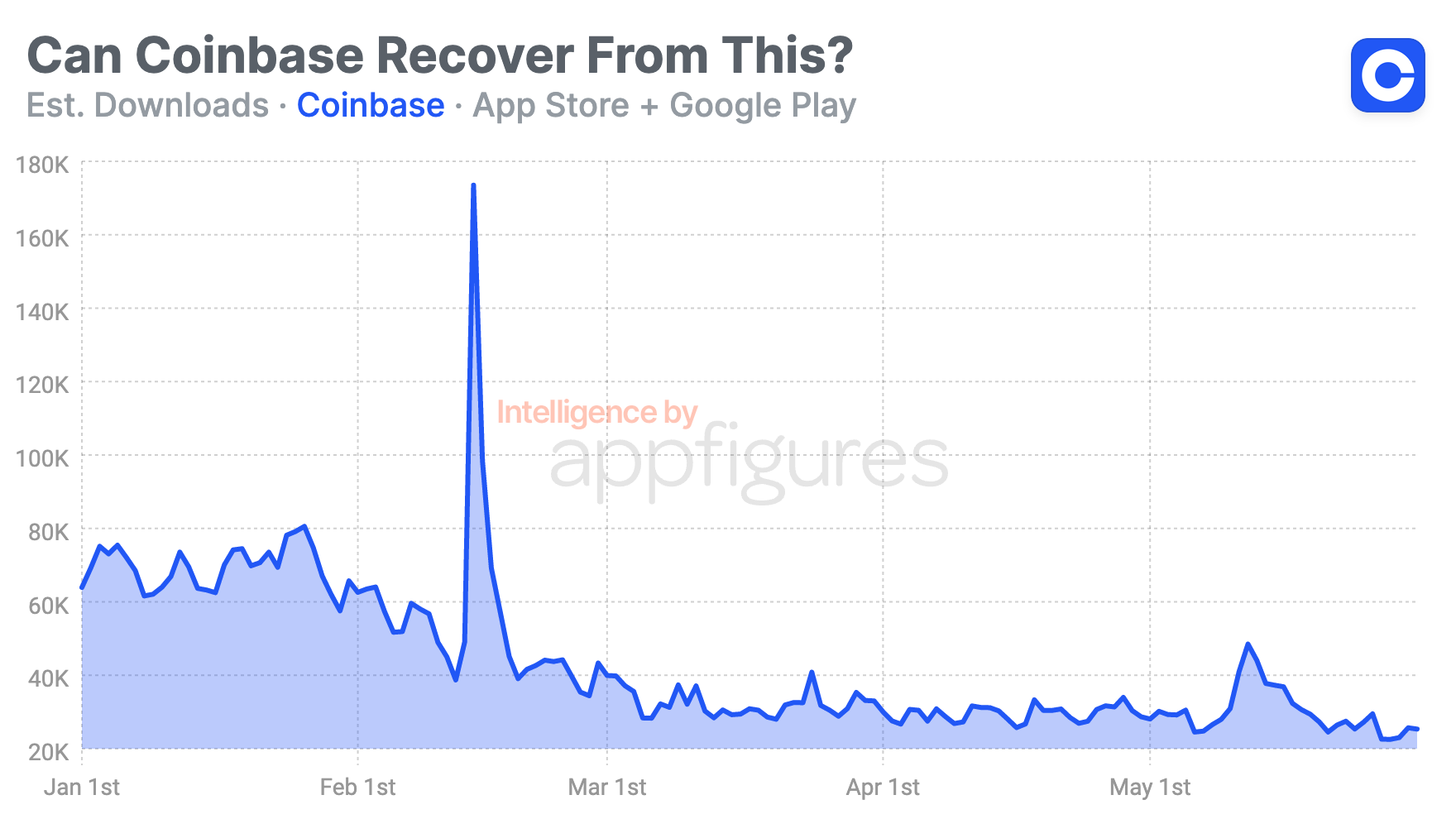 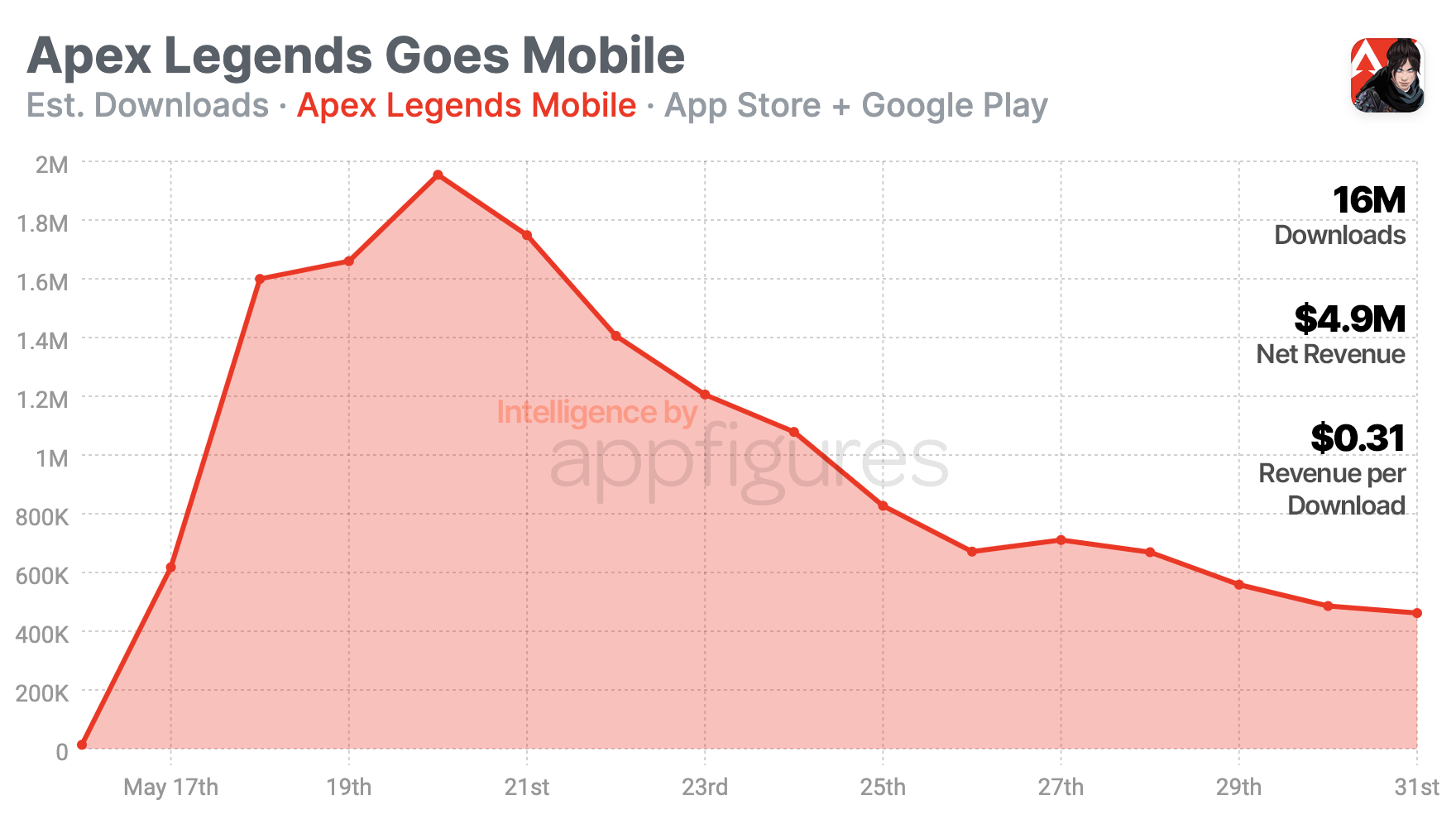 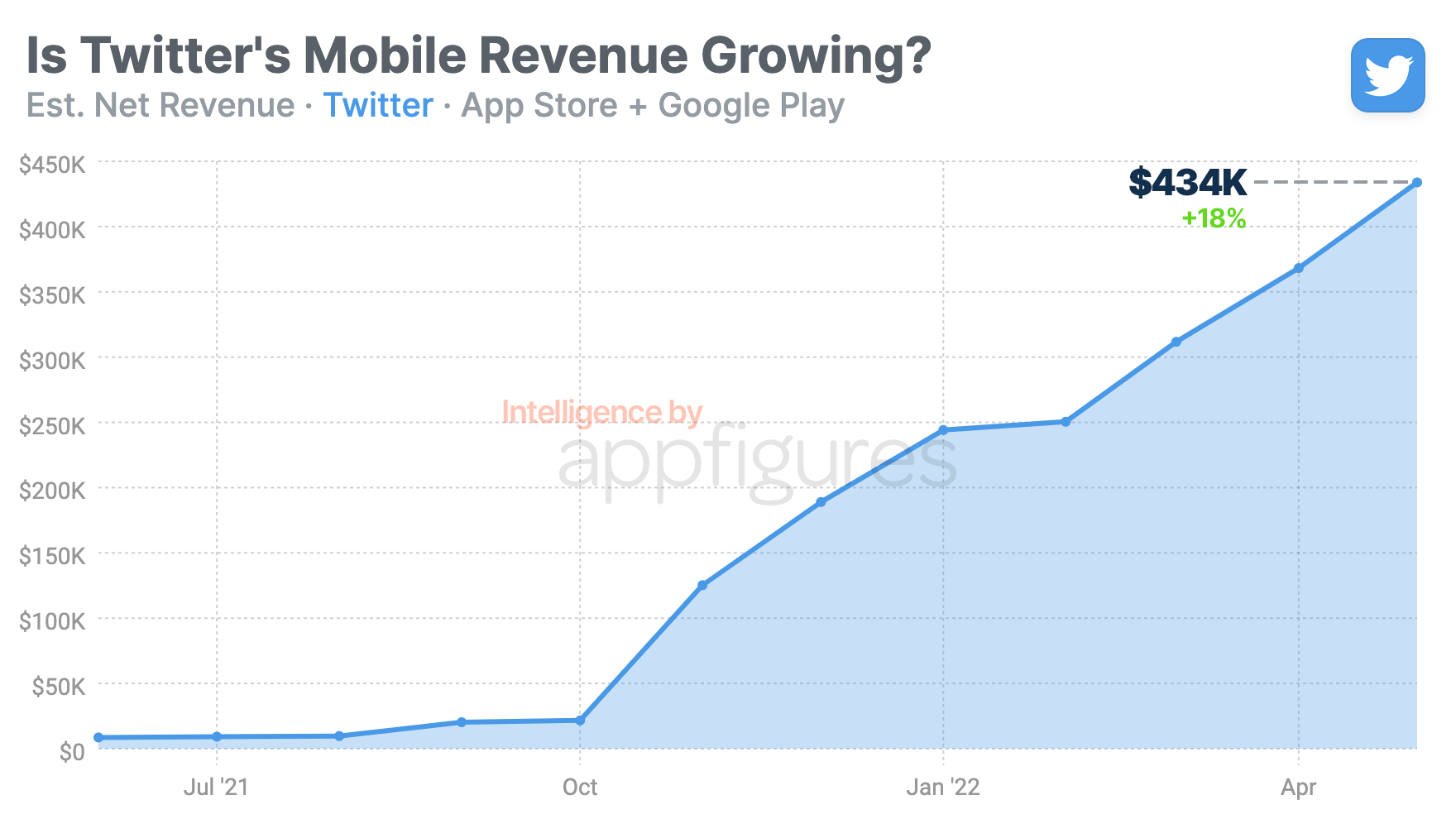 4. Peloton's New Direction is Paying Off

Peloton, the high-end exercise bike company that took off during the pandemic and crashed right after, has hit a new milestone with its app – The highest month of revenue.

Why is this interesting? Because, if you recall, Peloton pivoted a "bit" last year to focusing on its content, and that's where app revenue is coming from. 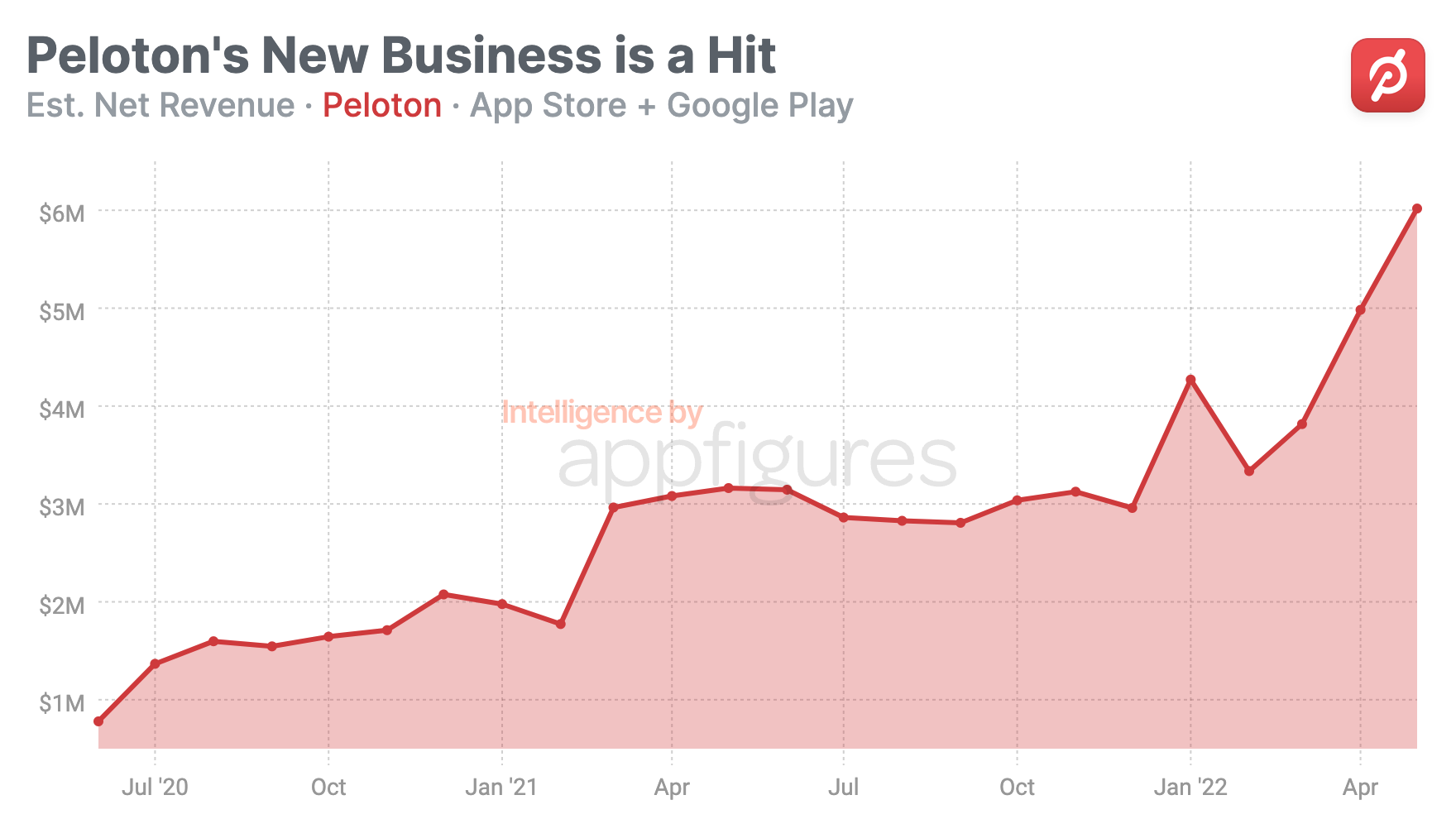 Peloton ended May with the most revenue in a single month the app has ever seen. Our estimates show net revenue hitting $6 million in May. The majority, roughly 92% came from the App Store while the rest came from Google Play. Makes sense!

And that's net revenue, which is what Peloton gets to keep after giving Apple and Google its fees.

That's not only a great milestone for the app that rode its content, pun intended, to success even before it went in-app, but also a great show of strength on mobile. So far, revenue has grown 42% when compared to January, which was a higher than average month

App revenue is a small part of Peloton's total revenue right now, but given this growth so far in 2022, I don't see any reason for it to remain that way. I don't see inflation getting in the way, either.

Last week Paramount+ had the most downloads it's ever had in a single day. In the past, new movies or TV shows led to a short-term bump, but not this time. 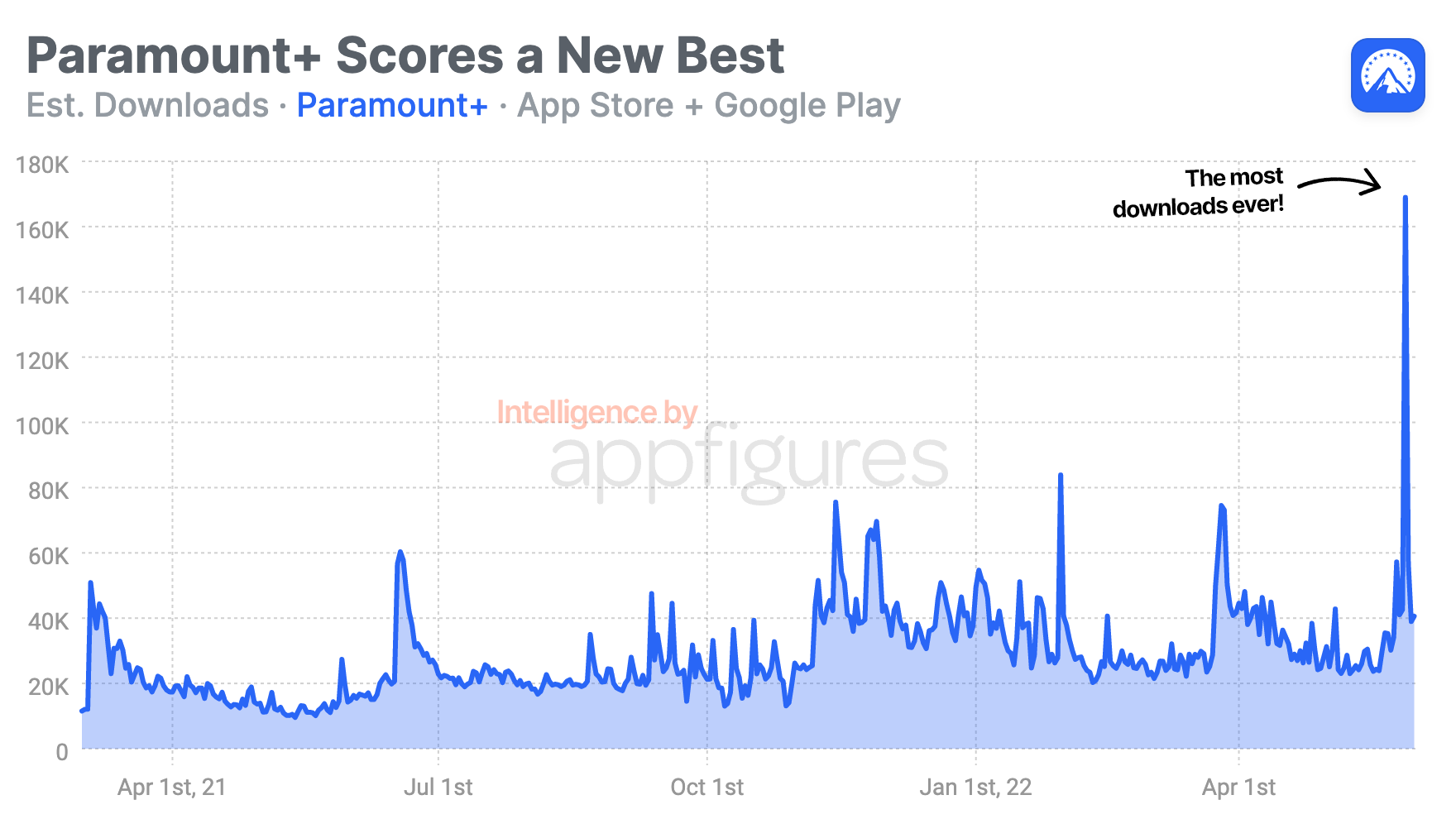 We estimate that on Saturday, downloads hit 169,000, the highest they've ever gone since the app relaunched in March of 2021. Paramount has seen quite a few spikes, but the closest one to this Saturday's was less than a half!

Also also, the downloads did not come from Europe, an incorrect but understandable guess. Why? Because Paramount+ isn't available in Europe yet. It's expanding into the UK and other countries later this month. So all of those downloads were from the US.

One thing I'm planning to watch is whether those downloads turn into revenue. Big events are a great way to capture downloads, but as HBO Max learned last year, offering a free trial on top of big content is not a good way to make money, which is why they dropped that offering.

It's too early for Paramount+ to strictly optimize for revenue, but if it continues to find the right content to stream, it just might. And overall, that's what I expect to see from all streamers as the industry normalizes.

Update: A previous version had an incorrect revenue per download for Apex Legends.