1. Just How Many TikTokers Are There?

TikTok is in trouble in the US. Maybe. Probably. It's hard to tell... But in case you haven't heard, the US Senate is annoyed after an article by BuzzFeed suggested TikTok is sending private data from US users to the motherland + that TikTok lied to the Intelligence Committee.

I was surprised the Senate believed them in the first place, so this, to me, isn't a surprise. At all.

But, just how many Americans are tiktoking? 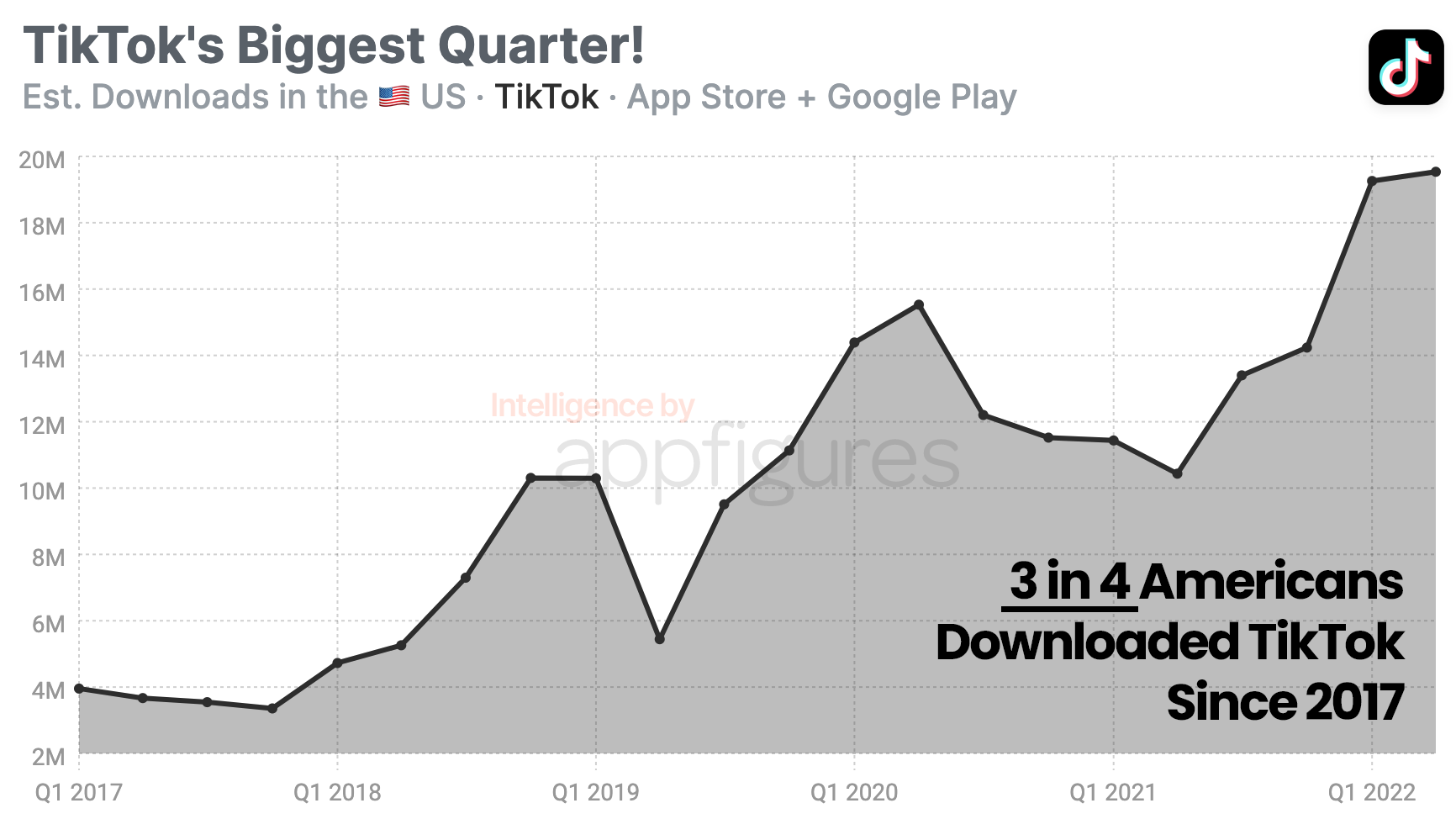 According to our estimates, the TikTok app has been downloaded by more than 220 million devices in the US since 2017.

According to data from Statista, there are 295 million mobile devices in use in the US, which means 3 in 4 American mobile users have downloaded TikTok at some point since it became a teen sensation.

Senators are now asking the FTC to investigate TikTok's data handling processes, and the head of the FCC is asking Apple and Google to remove TikTok from their stores in the US. Things seem pretty grim for TikTok, right?

Well... This isn't the first time TikTok is in hot water, and I suspect that just like the previous times, it'll manage to continue doing what it's doing just the way it feels like doing it without any real consequences.

Why? It already lied to lawmakers multiple times in the past with no real consequences and even faced a near ban by the president, which didn't actually happen. All of that while being one of the most downloaded apps in the US + one of the top earners.

What do you think? Is TikTok going away any time soon?

2. The Most Downloaded Apps in the World in June

June's done with, which means it's time to crunch the numbers and rank the most downloaded apps in the world! June saw the return of a familiar face as well as a couple of interesting trends. 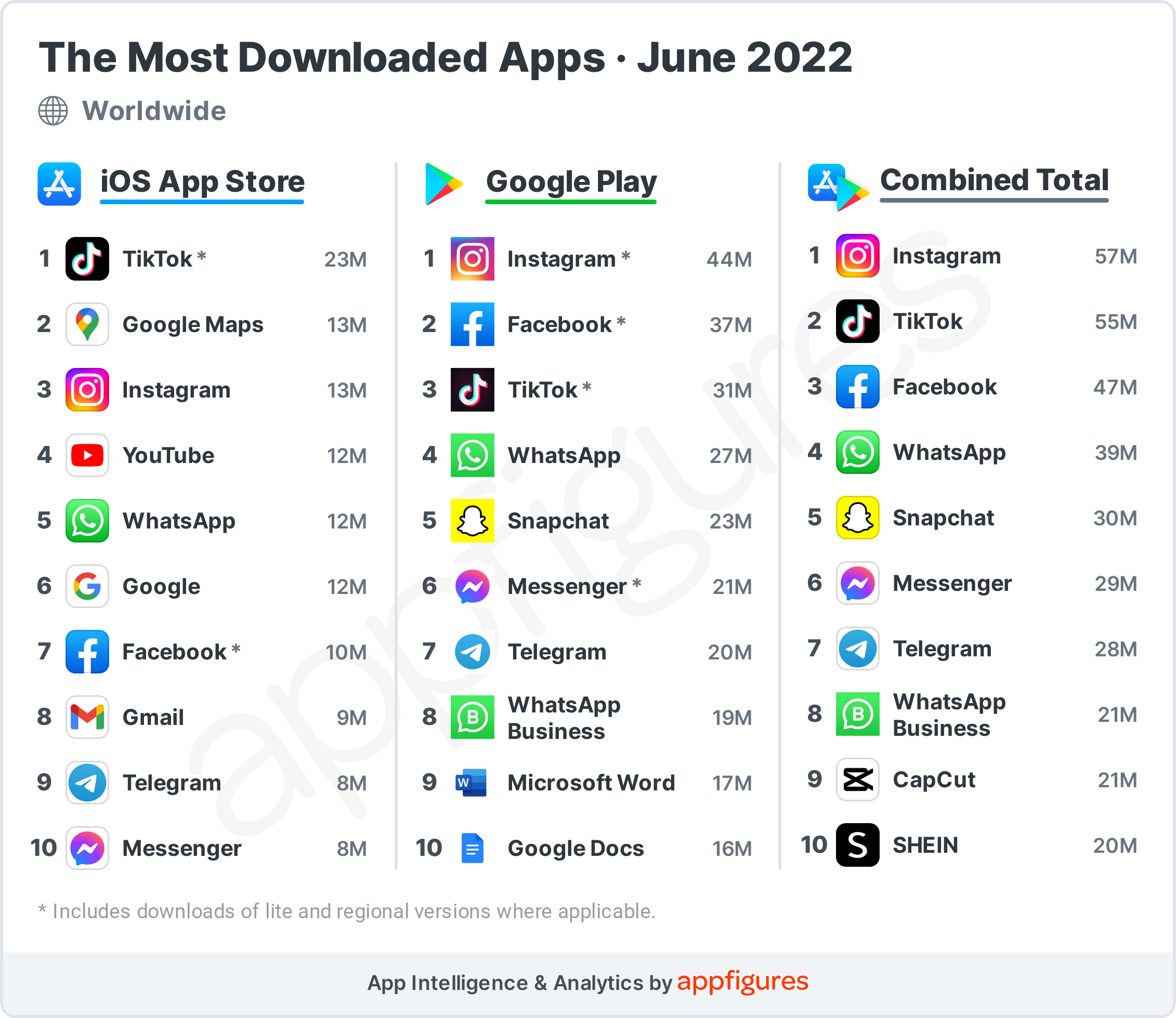 Let's start at the top. Instagram was the most downloaded app in the world in June. TikTok, May's winner, saw more downloads in June than in May, but Instagram saw even more. And yes, much of Instagram's growth can be attributed to India, where TikTok is still banned.

Will TikTok regain its top spot?

Facebook also managed to clear the top 10 list on the App Store side in June after dropping out in May, which surprised many readers. The two never dropped out of the combined list, and June was no different, with the two taking #3 and #6, respectively.

An interesting trend that's been developing for the last few months is Microsoft Word creeping into the top 10 list. Sure, Word is popular on the desktop, but is it really that popular on mobile? The easy answer is yes, but that's not exactly a trend. It became a trend when Google Docs joined the list in June.

Is this just for the summer? Will it continue beyond? We'll have to wait and see.

Together, the top 10 most downloaded apps in the world made their way into 345 million devices, according to our estimates. That's a bit lower than last month but not enough to be concerned about.

3. The Highest Earning Apps in the U.S. in June

In addition to downloads, I also crunched the numbers and ranked the highest-earning apps in the US in May. I focus on the US for revenue because that's where most of the money is in, but if you want me to expand this report, let me know!

I would love to say that June was an exciting month in revenue, but it simply wasn't. 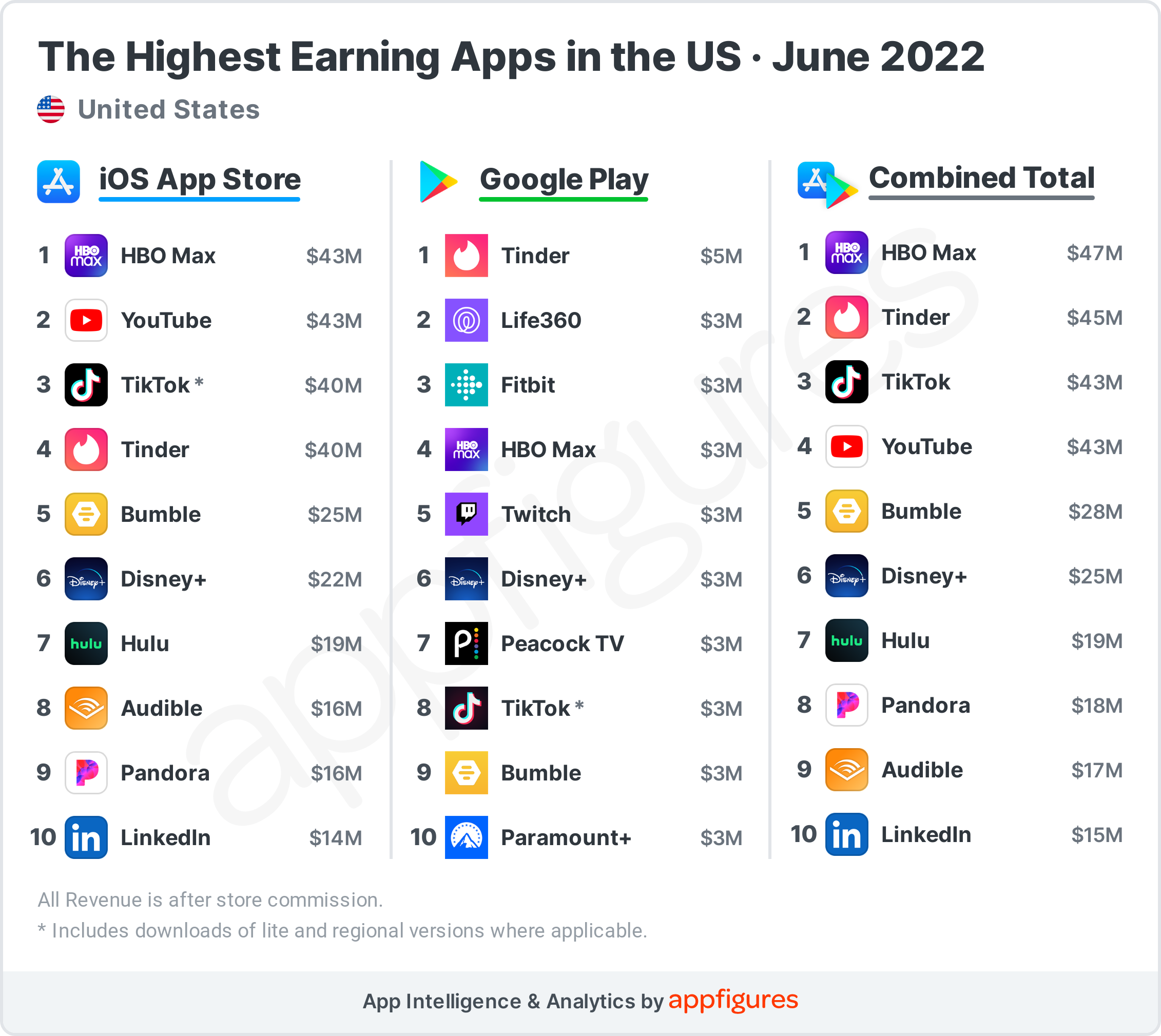 HBO Max continued to be the highest-earning app in the US, adding $47 million in net revenue to its bottom line in June, according to our estimates. What's interesting here is that there wasn't any amazing new title release that caused this. In fact, HBO Max seems to be going back to pre-covid release standards where new titles go to theaters first. Yet, revenue is still holding up.

I say that while looking at Disney+, which made the list in June easily, but with about half the revenue. Remember when the two were very close?

LinkedIn made the cut again in June, adding $15 million of net revenue to its bottom line. Our estimates show most of that total coming from the App Store.

Together, the top 10 highest earning apps raked in a cool $299 million of net revenue from the US in June. A bit lower than May, which was a bit lower than April. I hope July will break the pattern.

4. Twitter's In-App Revenue Grew in June, But Not By Much...

June is now behind us, and unlike the months leading up to it, June was substantially quieter for Twitter. Elon slowed down his use of the platform, there was very little bickering, and it felt like the news cycle moved on for a moment.

But, is quiet good for the bottom line? 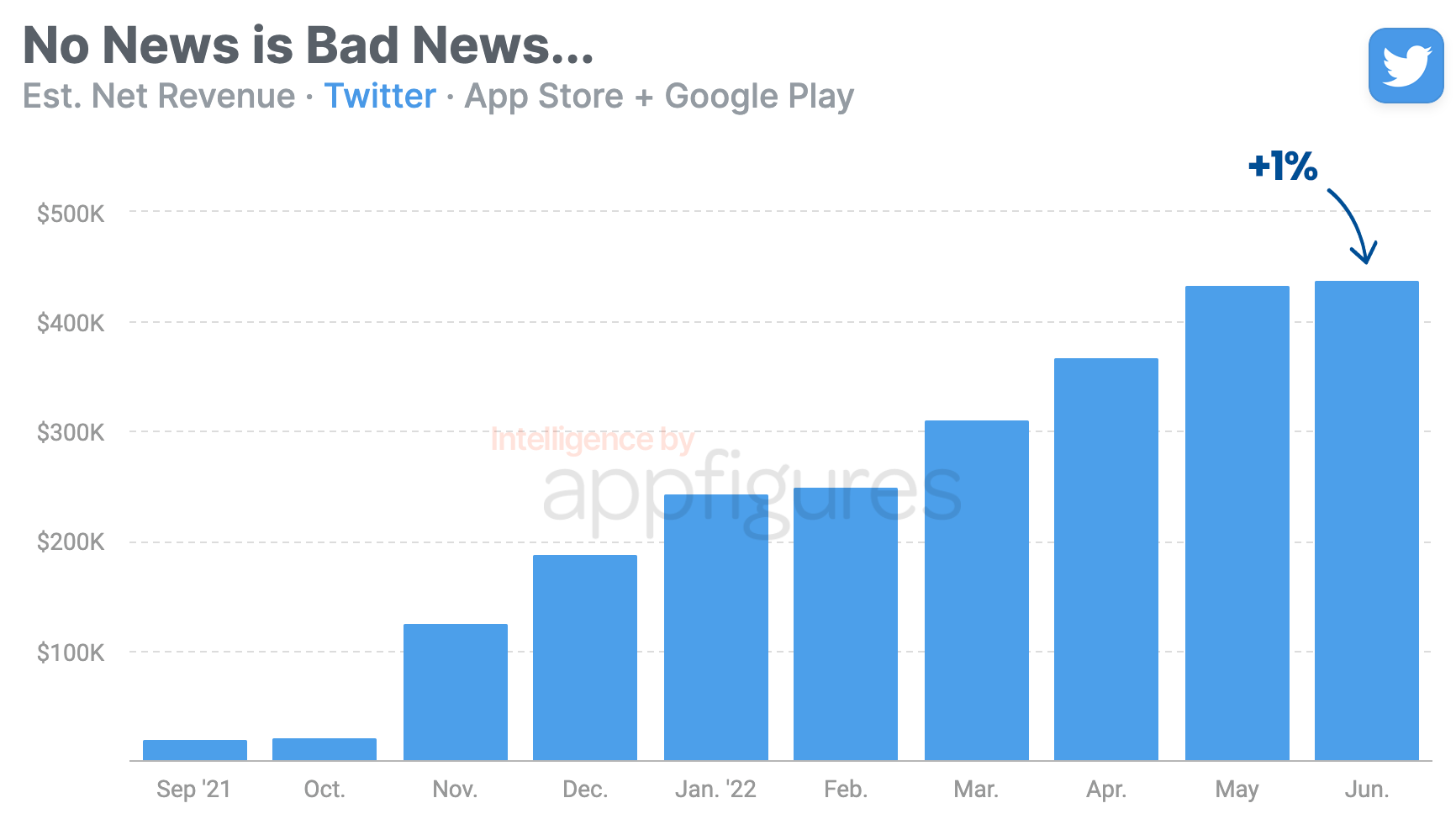 Numbers first - Twitter ended June with net revenue of $439K, according to our estimates. This is net which means after Apple and Google take their 30% fee.

Twitter's in-app revenue has frown by double digits nearly every month since it started monetizing, but June's increase marks a departure from that. While June's total isn't lower than May's, it's only barely higher. And by barely, I mean just about 1%.

Have you heard the saying "no news is good news"? That doesn't seem to be the case for Twitter. But really, I think the reason for this lackluster growth isn't just about the uncertainty surrounding Twitter but rather about its lackluster paid offering.

Not much has changed from last month, and that was already pretty dry... Nearly every other social platform is doing more to monetize, and Twitter's inability to do that is its biggest enemy.

I hope that changes, and fast!

By the way, if you're comparing these numbers to last month's report and thinking these are way too high, that's because last month I looked at revenue in the US, while this month I've expanded the report to include global revenue.

Last week I looked at how revenge travel is sky-rocketing and how well we can see it translate into downloads. I looked at airlines, car rentals, and travel booking apps. And there were a lot of downloads.

Well, there's one "little" category I didn't touch on that's also seeing downloads exploding, and that's the category pretty much owned by Google, which is driving directions apps. And by that, I mean Google Maps and Waze. 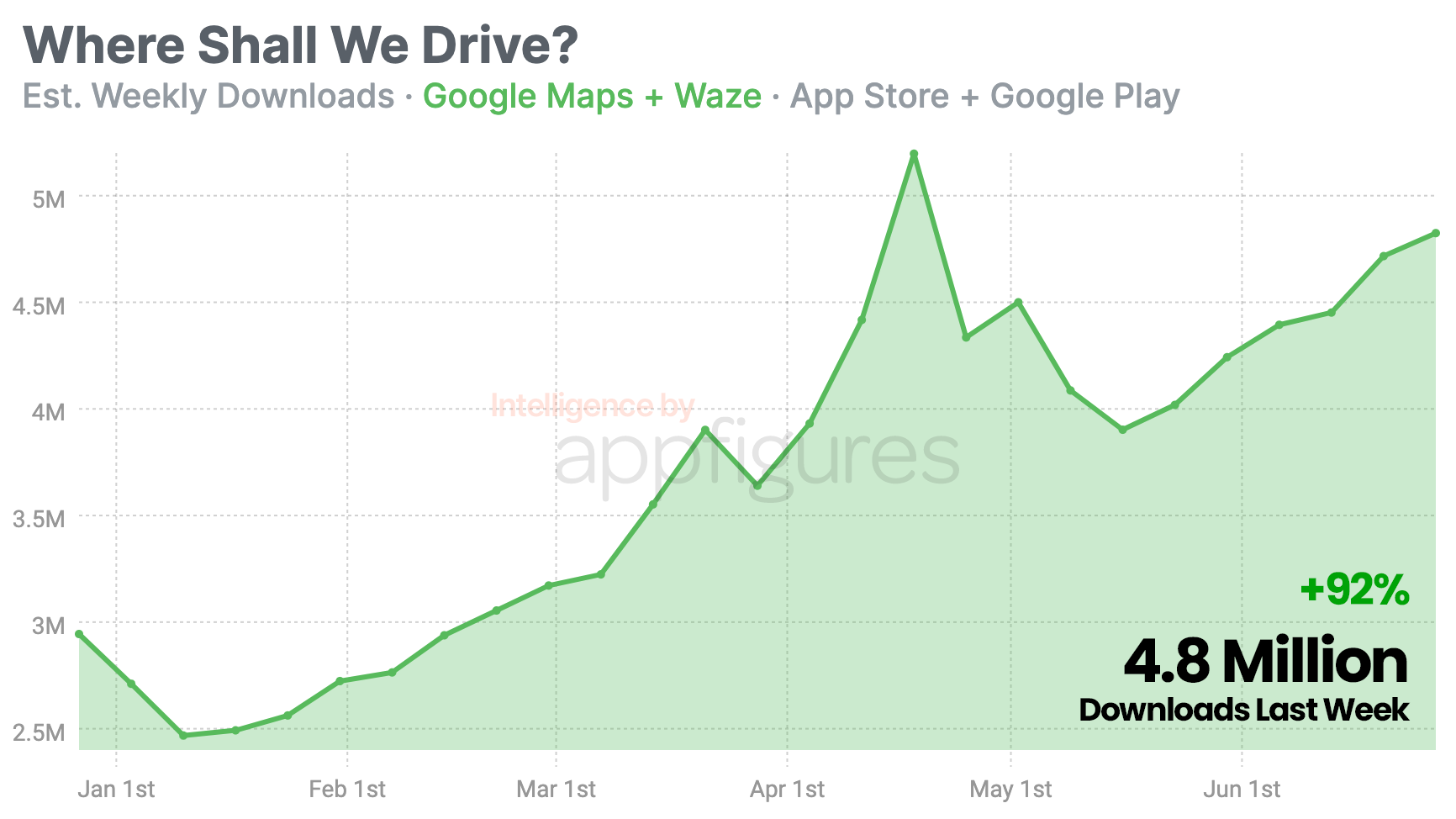 Combined weekly downloads of Google Maps and Waze, both owned by Google, rose by 92% since January. In absolute terms, that translates into 4.8 million downloads last week, according to our estimates, which happens to be the second-highest week of downloads this year.

I'm not sure why this trend is called revenge travel, but what I am sure is that this is a great time for competitors to step up their mobile game and ride this wave instead of letting Google grow its user base even more.