This Week in Apps #129 - Twitter's Finally Growing (its Revenue)

Earlier in the week Twitter kingmaker Elon Musk did something he hasn't done in a while. Elon helped an app get downloads!

Last Sunday, Elon casually mentioned on Twitter he started intermittent fasting, and right after mentioned Zero and said it's "quite good".

How many downloads does "quite good" get you when tweeted by Elon Musk? Let's have a look at our App Intelligence: 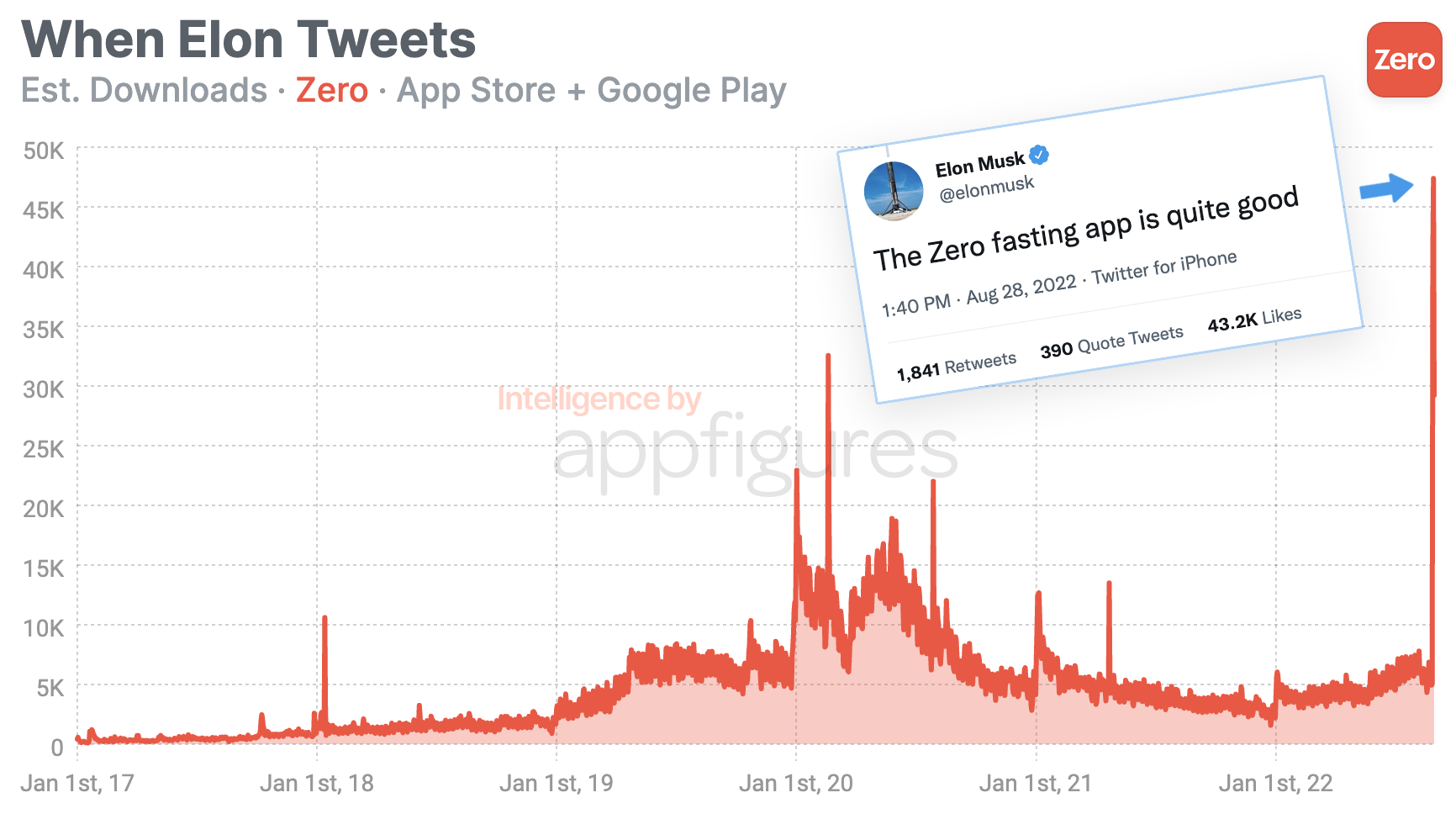 Zero is an app for tracking intermittent fasting founded by Kevin Rose, the guy behind Digg. I'm dating myself here, but now you have context.

The app has been available since the end of 2016, and in the last few months averaged roughly 5,000 new downloads per day, according to our estimates.

On Sunday, when Elon tweeted it, downloads jumped to 41,000, and on Monday to 47,000. Downloads sloped on Tuesday because tweets don't have that much momentum, but still ended the day with a cool 29,000.

In total, one casual tweet about an app most people don't need, earned Zero about 108 thousand new downloads. Compared to about 15 thousand it would have gotten without it.

That might not sound like a lot when compared to the millions of downloads Elon got for Signal last year, but that's a lot of downloads for Zero. In fact, it's the most downloads the app has ever seen in a single day. And considering it's somewhat niche, I see this as a serious positive.

I'm sure Zero is happy, and it's a good reminder that influencer marketing is a great way to get downloads. Especially when it's done casually.

Speaking of Elon! August is behind us which means it's time to take a look at Twitter's in-app revenue. I've been doing this every month since Twitter officially made this available to users because I think it could become an important revenue channel. If done right.

The last few months have not been great for revenue growth, but things changed in August! 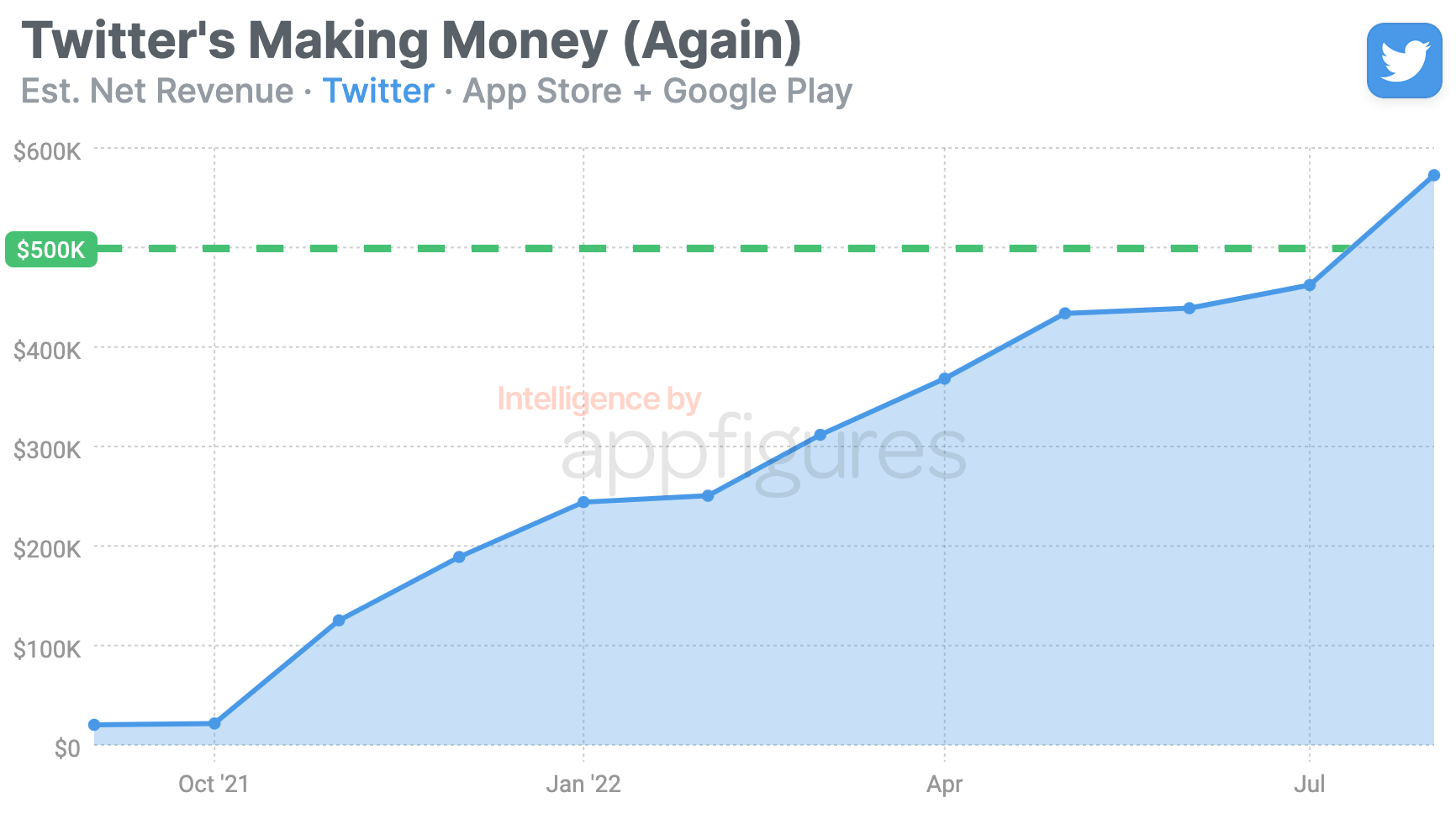 Twitter's revenue has grown fairly steadily and at a nice pace earlier in the year, but June and July have been very slow. And by that I mean revenue growth rate of just 1% in June and 5% in July. A sharp decline from May's 17% growth and April's 18% growth, and if we zoom out a bit more, the 29% it saw in January.

Between a weird recession and a circus-like takeover, it's easy to see how some things would get put on hold. Not ideal, but understandable.

But it looks like that pause was undone in August as Twitter's in-app revenue grew by 24%, crossing the half-million mark for the first time!

We estimate August's net revenue hit $573,000 from the App Store and Google Play. As you might expect, the App Store was responsible for most of that revenue, about 90% in total, which has been the average for the app since it started charging. Oh, and that's net revenue, meaning what they get to keep for Twitter Blue and share with creators for Super Follows.

Twitter's revenue might be growing slowly, but in the process has shown other platforms that in-app revenue is a good idea. Platforms like Snapchat, which offers less and earns more...

I'm glad things are getting back to normal for Twitter, but still think this is way underperforming. One of these days Twitter will really try, and then we'll see serious growth.

3. This Location Tracking App is Earning Millions of Dollars!

I love finding apps that hit new all-time highs, especially when those highs have a dollar sign in front of them, and I have one you may not know because I sure didn't.

Life360 is a location tracker for family and friends, pretty much a 3rd party Find My, that's pretty popular on the App Store and on Google Play! 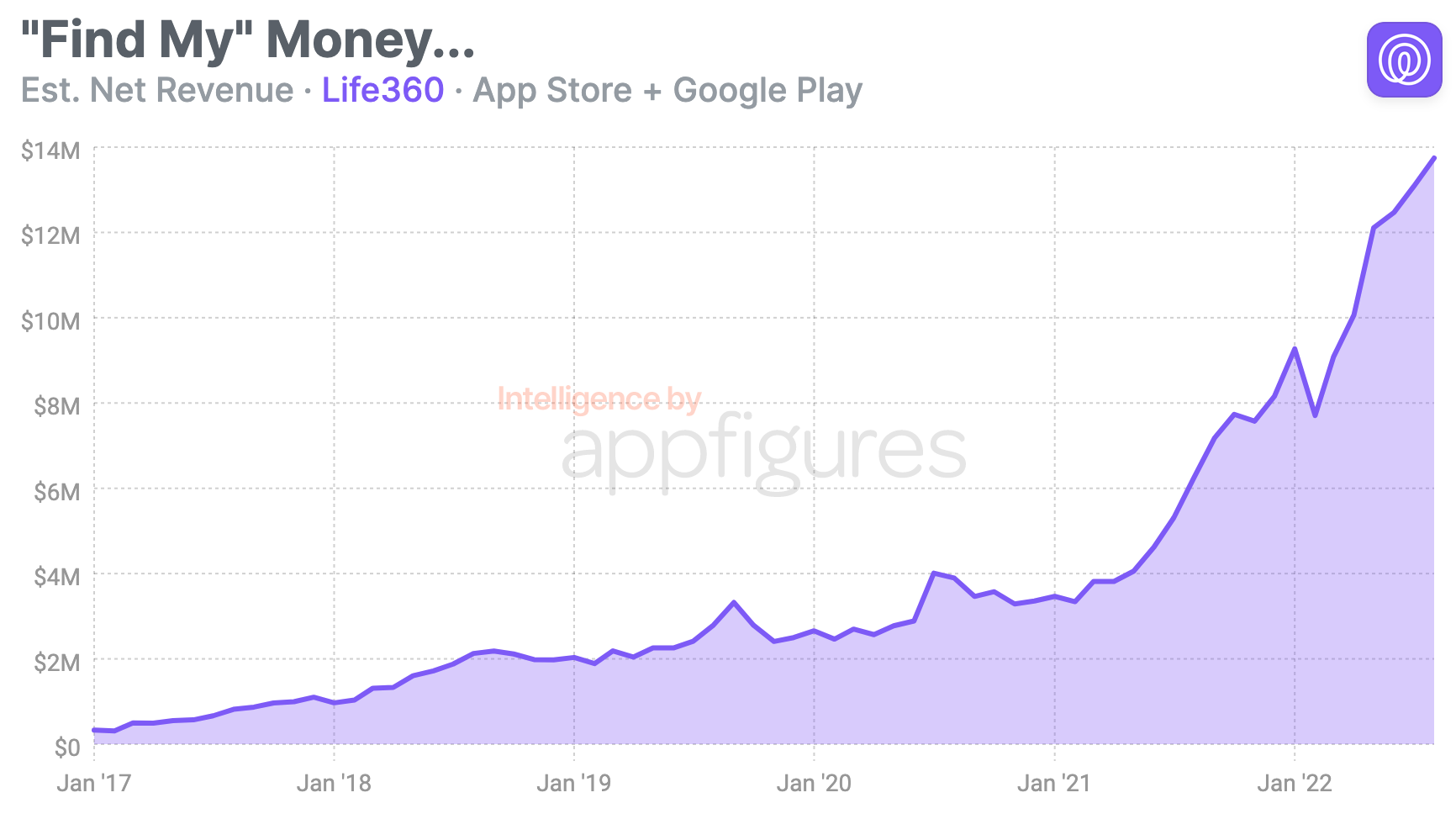 You might think that no one would need a tracker like that, but our revenue estimates suggest they do. And there's a lot of them because monthly net revenue hit a new all-time in August with $13.7 million.

That's a massive number, but it's not the only interesting part. The speed at which it grew in 2022 is another cause for celebration! In January of 2020, net revenue was at around $2.7 million. And no, I didn't forget a leading 1 there.

Monthly net revenue grew, slowly, and reached $3.5 million. Commandable! But not nearly as exciting as January of 2022, where Life360's net revenue rose to more than $9 million.

Just a mere few months later and Life360 is now close to $14 million. That's a lot of money!

It's interesting to see how many people trust an app that tracks their location these days, and while digging into the app's history I discovered it was selling that location data to data brokers. Emphasis on was because according to this article it isn't anymore.

4. Trump is Driving Downloads Again, But Not to the App You'd Expect

Ex-president Donald Trump has commanded the news lately. I don't want to get into the politics of it, but I expected such attention on him would lead to more downloads of his social network app Truth Social.

Truth Social rolled out earlier this year and had a very successful first week in the App Store, and I'm solely basing this statement on downloads. But after the first wave of excitement, the app disappeared from the top charts and downloads faded away quickly.

But while Truth wasn't getting attention, another app was – Rumble. 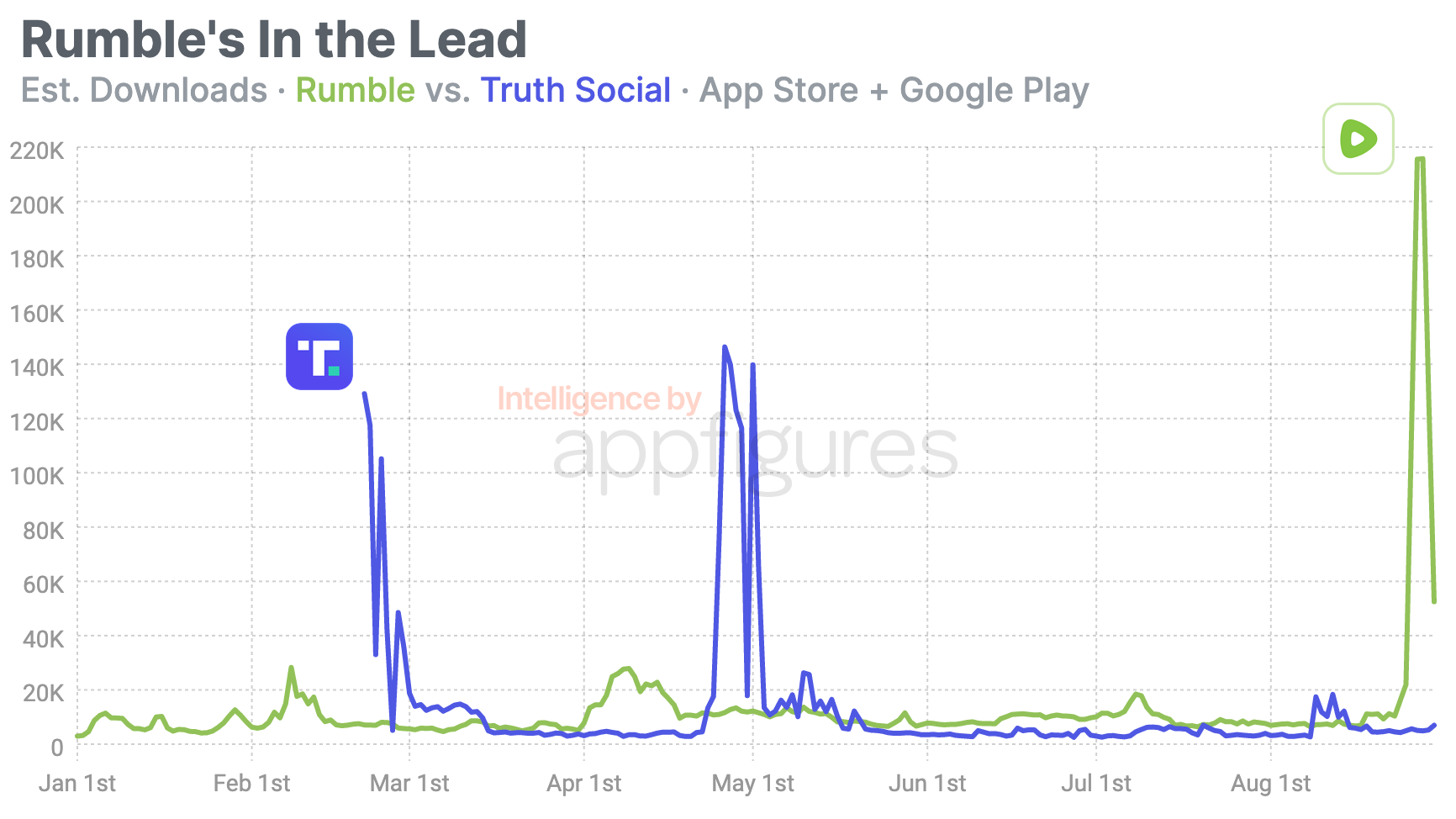 Rumble is downloaded around 7,000 times a day on average, according to our estimates. It had a few days where downloads tripled and even quadrupled for a day or so, but only a small handful around the 2020 elections.

Last week, downloads began to grow, and within a few days hit an all-time high.

Downloads started growing last Tuesday, when the app crossed 10,000 daily downloads. They continued to grow into the weekend and hit 215,000 on Saturday and a similar amount on Sunday.

They were down by the end of the weekend but are still about 8x higher than a normal day.

What's also worth noting is that not all downloads came from the US, which is what I had guessed would be the case. Roughly half of the downloads, across both the App Store and Google Play, came from the US. The rest came from all over the world, led by all English-speaking countries.

At the same time, Truth Social was downloaded just 41 thousand times on the App Store and non on Google Play, because there's no Android version.

Having never used Rumble I wonder if this kind of popularity will earn it the bullseye that ended Parler...

Apps from Bank get downloads. Quite a few downloads. Growth wasn't amazing, but it was certainly stable. And then came virtual banks and many thought they'd quickly and easily take over.

After all, who wants to go to the bank, right? 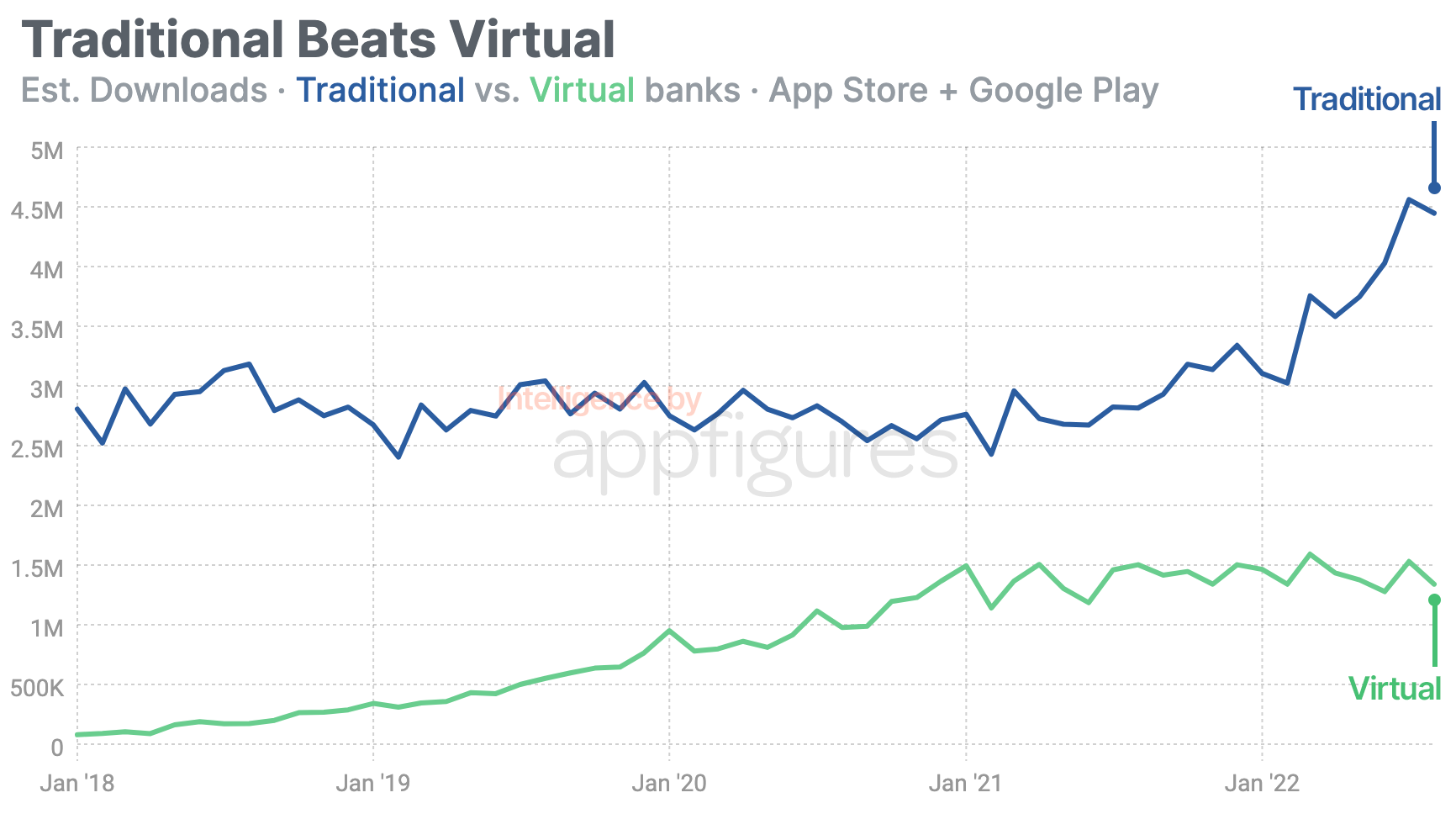 I was curious to see how downloads of traditional bank apps compare to those of virtual banks over the last few years, so I rounded up the most downloaded apps from both categories and tracked them over time.

The trend surprised me a bit!

But first, the groups. For traditional banks, I aggregated downloads for Chase, Citi bank, Wells Fargo, Capital One, and bank of America. The most popular bank apps in the US. The virtual banks consist of Chime, Varo, Sable, and Current. The most downloaded in their category.

Both categories have seen little growth before 2022. There was some, but not much.

In 2020, downloads of traditional bank apps were stagnant, averaging 2.8 million downloads every month, according to our estimates. There was some fluctuation, but only minimal. 2021 was a bit more active and downloads grew about 15%. Better than 2020, but nothing like the growth they've seen in 2022!

Virtual banks, which you'd expect to grow faster, did, but only kind of. Downloads of the virtual group grew in 2020 but remained stagnant in 2021.

Traditional bank apps have been in high demand in 2022, however. The collection, led by Chase, grew 45% so far this year, and we're just a little more than halfway through. At the same time, virtual bank downloads dipped, losing about 13% of monthly downloads since the beginning of the year.

I like to end on an IRL example, and this, although not as intuitive as some others, is a good example that people do want to go to the bank. Or is it that they want to know a real bank exists? Either way, they want it, and that's going to be hard to compete with.