1. The Highest-Earning Apps in September 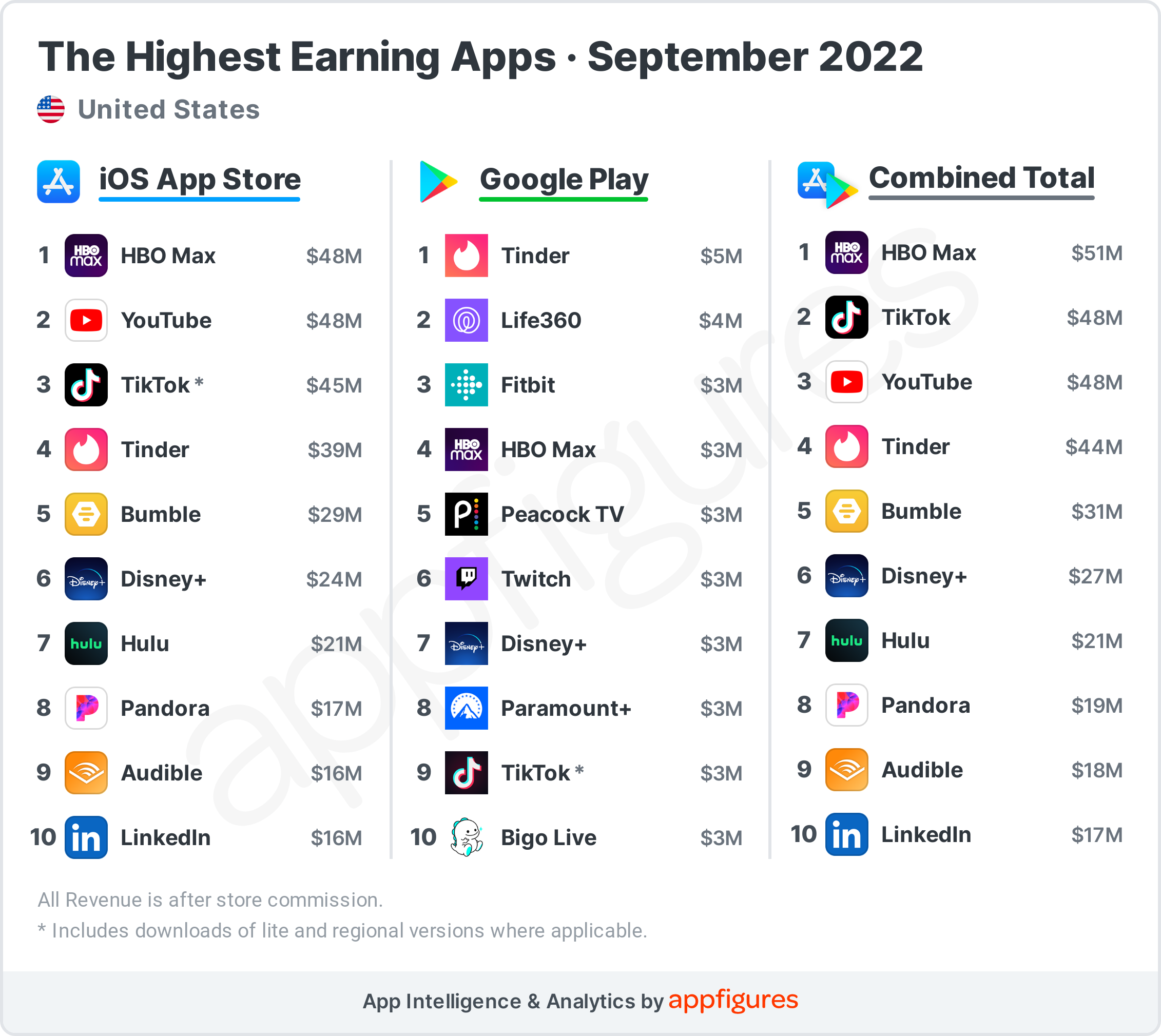 2. A Battle for Productivity - The Most Downloaded Apps in the World 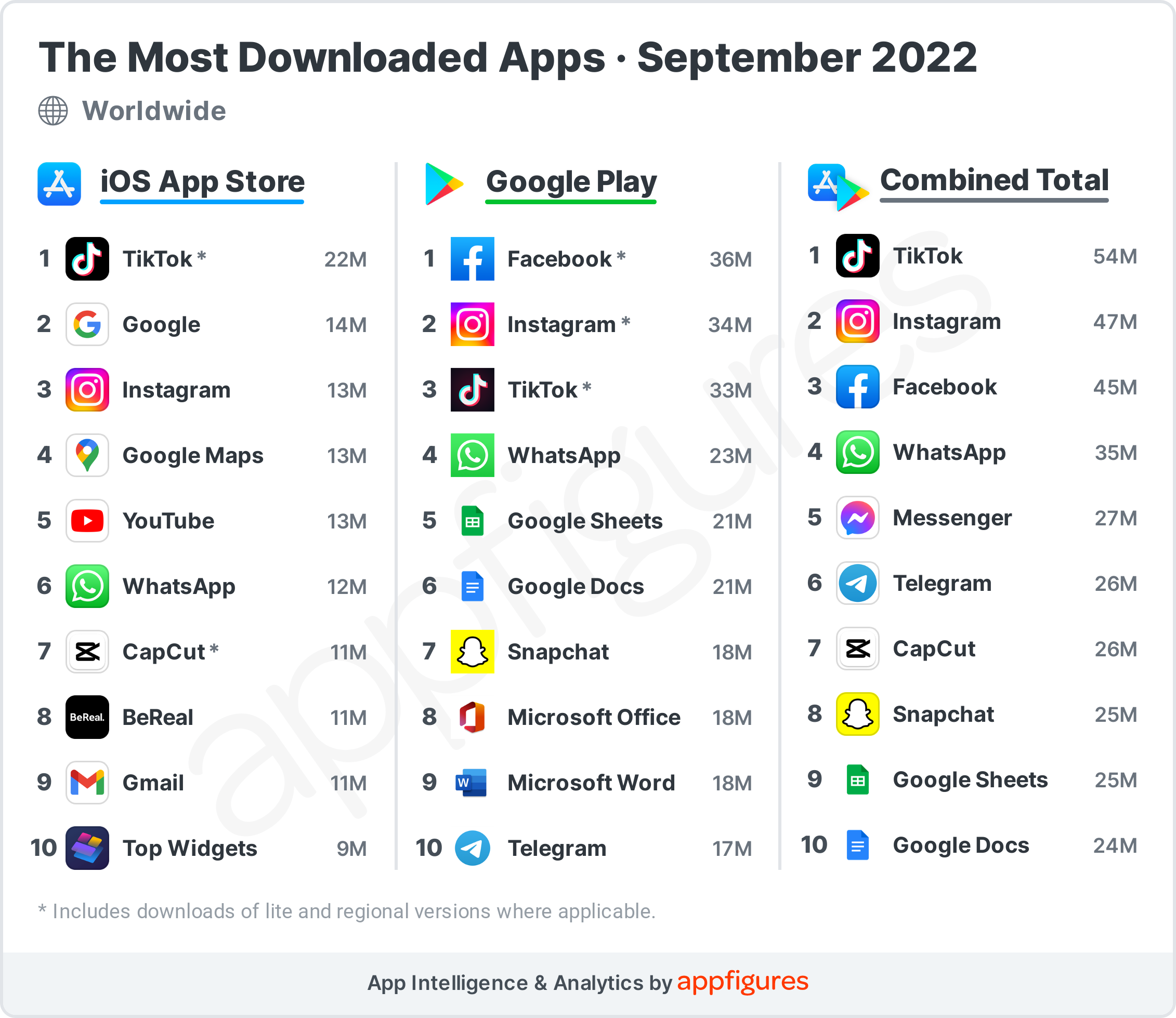 3. The First Year For Twitter's In-App Revenue Was Full of Ups and Downs

Every month I look at Twitter's monthly recurring revenue (MRR), but September was a special month, marking a year of mobile revenue for the platform.

Let's have a look at revenue and then talk about what this means and where (I think) it's going. There's good and bad news. 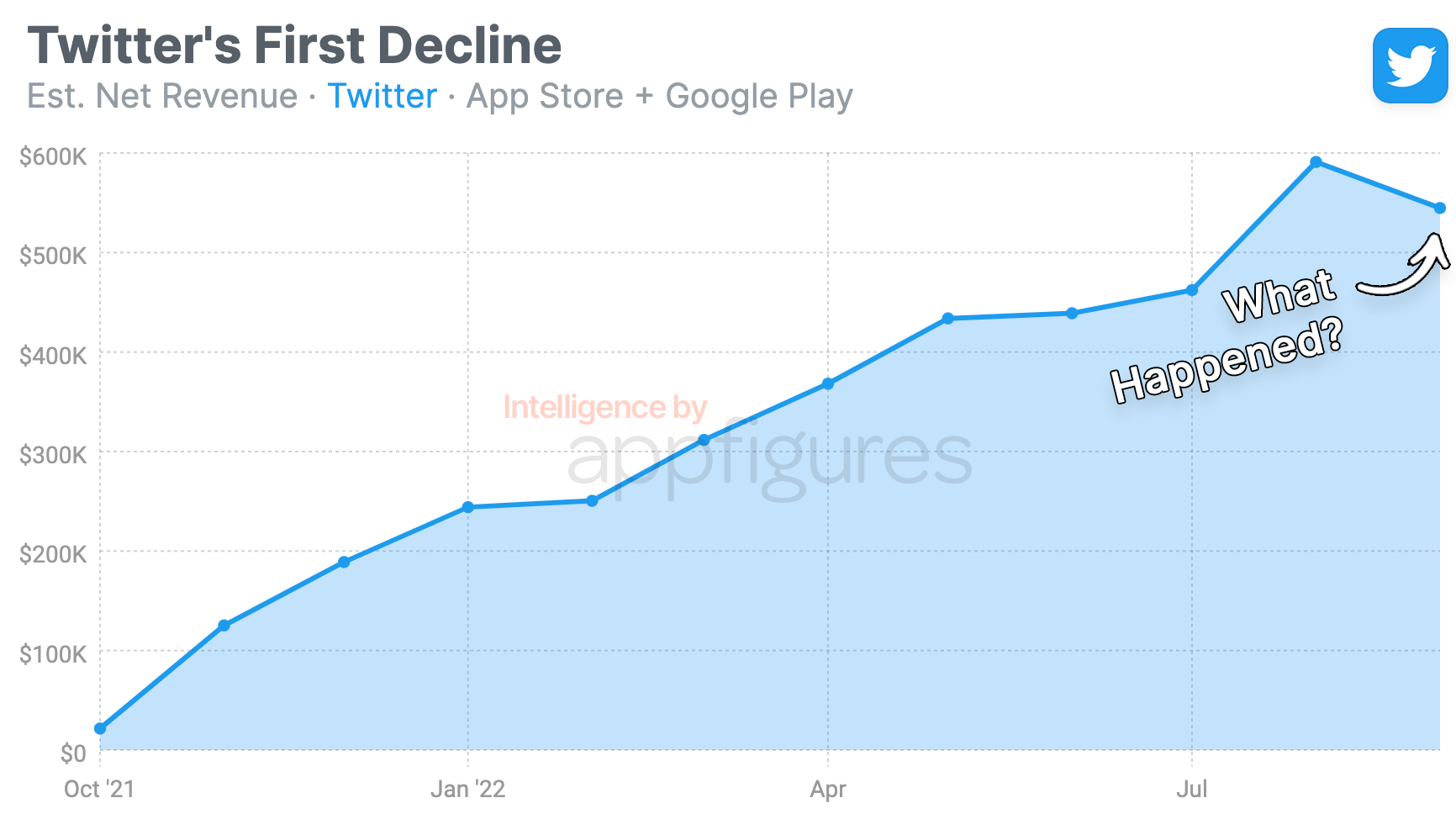 According to our revenue estimates, Twitter's MRR in September was $545K. If this is the first time you're seeing this number I feel compelled to remind this is thousands and not millions.

And if you remember last month's total you'll notice September was lower, double-digits lower. We've seen Twitter's revenue stagnate over the summer but this is the first recorded decline since its in-app purchases rolled out to all.

Why is Twitter's revenue so low? Why is it not growing faster? And why is it going down? All good questions.

I keep wanting to see it go up, but there really isn't a good reason for it to, yet, at least. So far what Twitter rolled out is not very exciting, and to move a userbase that never paid, requires something exciting.

On top of the lack of features, many were also locked under some sort of a private-beta or invite-only system. Traditionally, this could result in hype. That's not the case these days because every rival has something more exciting available, drawing both creators and followers away.

That's the main reason, in my opinion, for these numbers, which you'd expect to see from a new startup, not Twitter. But a parodic saga with Elon Musk and high inflation aren't helping either.

The good news is more wishful thinking than real news, but I believe this is easily fixable. I don't know the inner workings of Twitter, but do know they're very capable when they follow the right strategy.

If Elon acquires the platform this might/will change drastically I'm sure. Still an if.

Dating apps have seen both downloads and revenue grow drastically this year.

Downloads grew a lot in 2020 as lockdowns took over many countries and it was no longer possible to make friends IRL.

But much of that growth was in 2020 and downloads just kept going after. In fact, downloads stayed flat for most of 2020 and 2021. Revenue on the other hand continued to grow. And then grew some more.

In 2022 both downloads and revenue have already grown a lot, and this time it isn't lockdowns to blame thank. 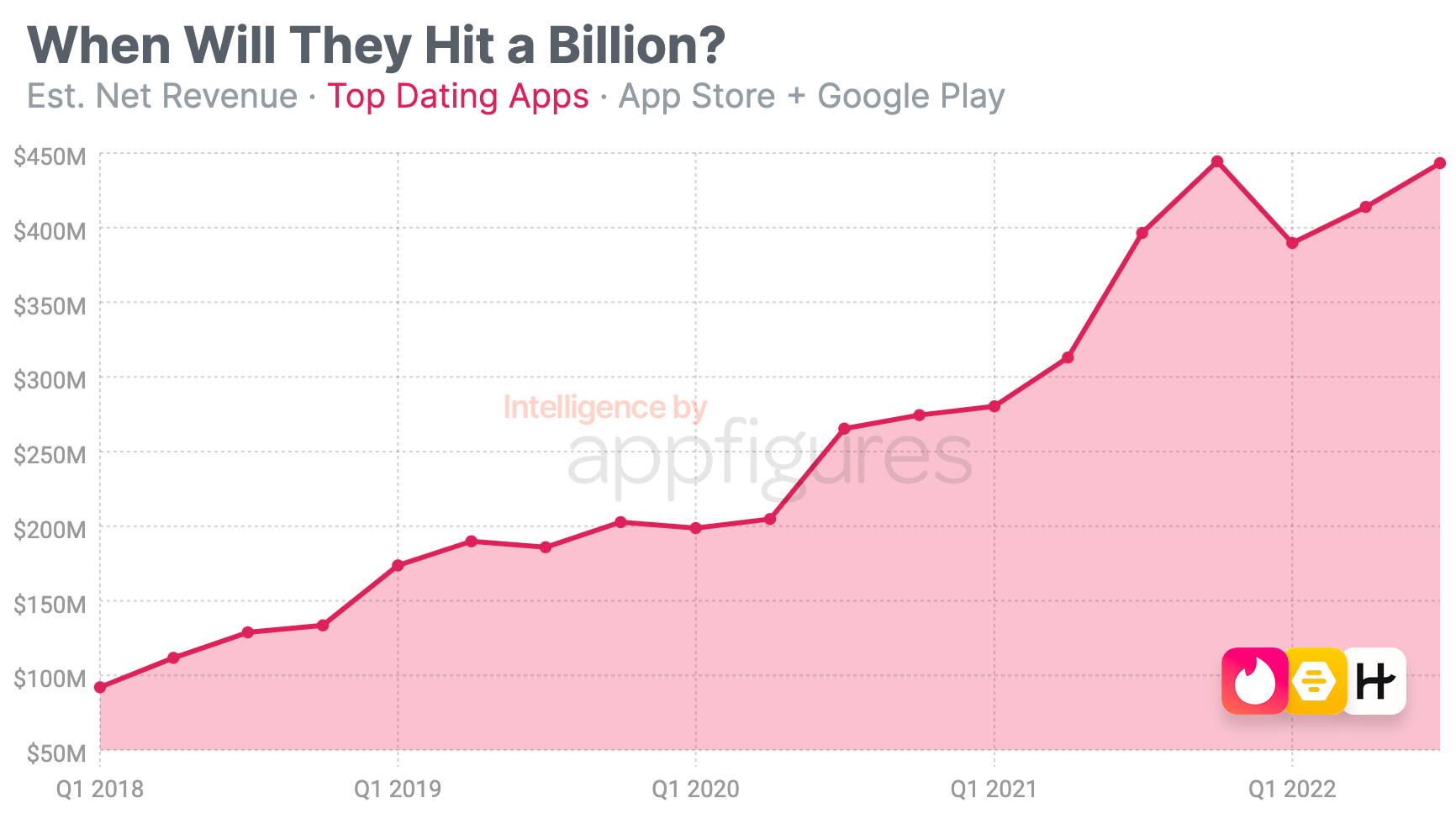 I combined the downloads and revenue for the three most popular dating apps for this analysis. Why? Because they're the top-grossing apps right now and have been for a very long time, and the next app in the list isn't even close in terms of ran (or revenue).

Together, quarterly net revenue of Tinder, Bumble, and Hinge grew 382% since 2018. In more absolute terms, monthly revenue rose from $92M in Q1 of 2018 to $443M in Q3 of 2022, according to our estimates. And this is net revenue, meaning after Apple and Google take their fee.

Growth was fairly constant with 16 of the 19 quarters since the beginning of 2018 having positive revenue growth. 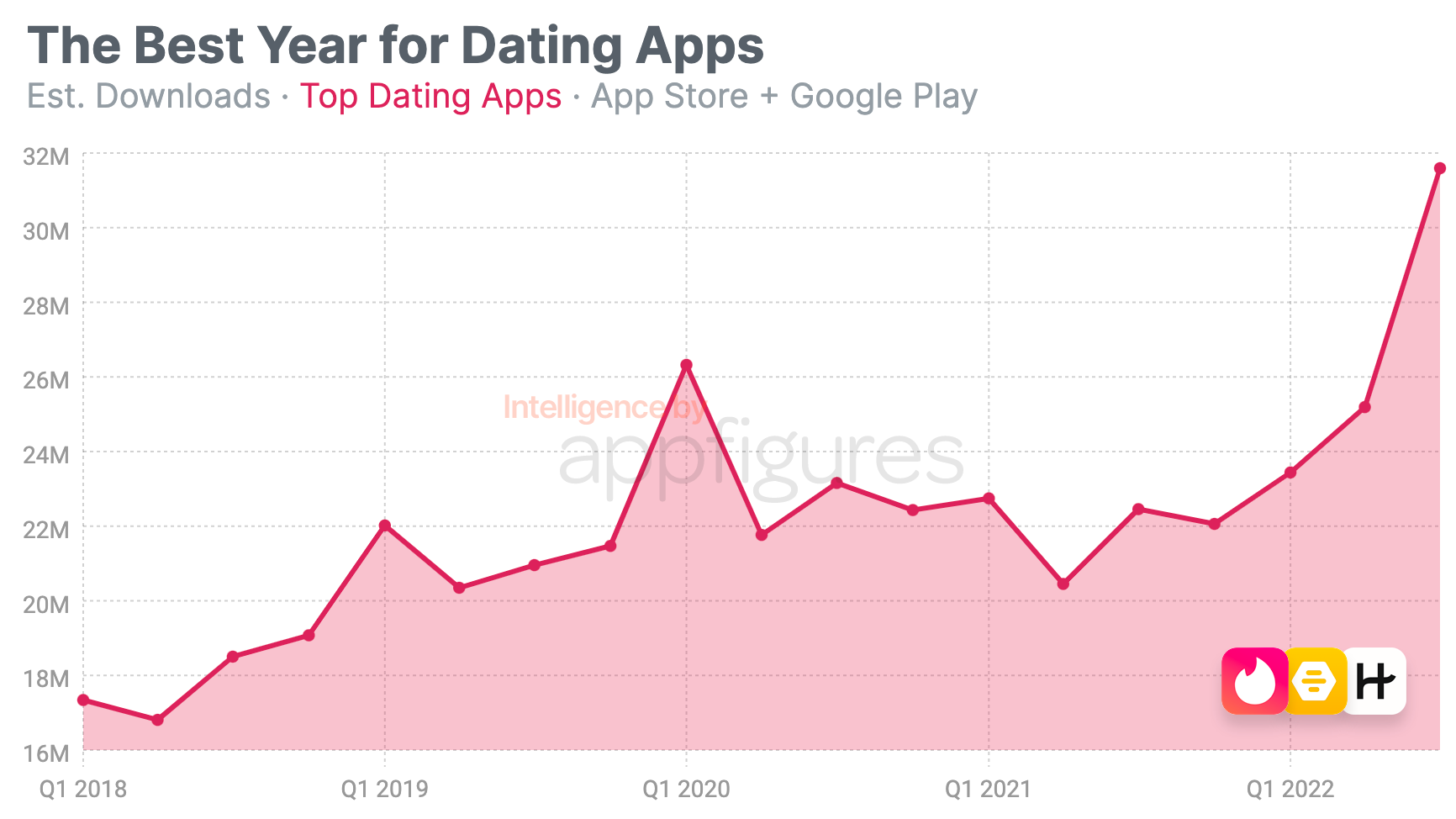 Note - Although Hinge isn't very strong outside the US, Tinder and Bumble are, so we're looking at global downloads and revenue and not just the US.

But as this field becomes hot again so is the competition. Tinder, Bumble, and Hinge might be the most popular, but the selection is growing. Apps like Fruitz (acquired by Bumble), The Right Stuff, and Fizz are some of the latest entrants trying to get a share of this market by having some unique value.

They join more than 15,000 apps that mention the word "dating" in their name or description. I fully expect more competitors to rise and more consolidation to occur as the bigs attempt to retain their position via M&As.

Streamer Paramount+ crossed a new milestone in September. The service, which launched in 2021, hit gross MRR of $20M. 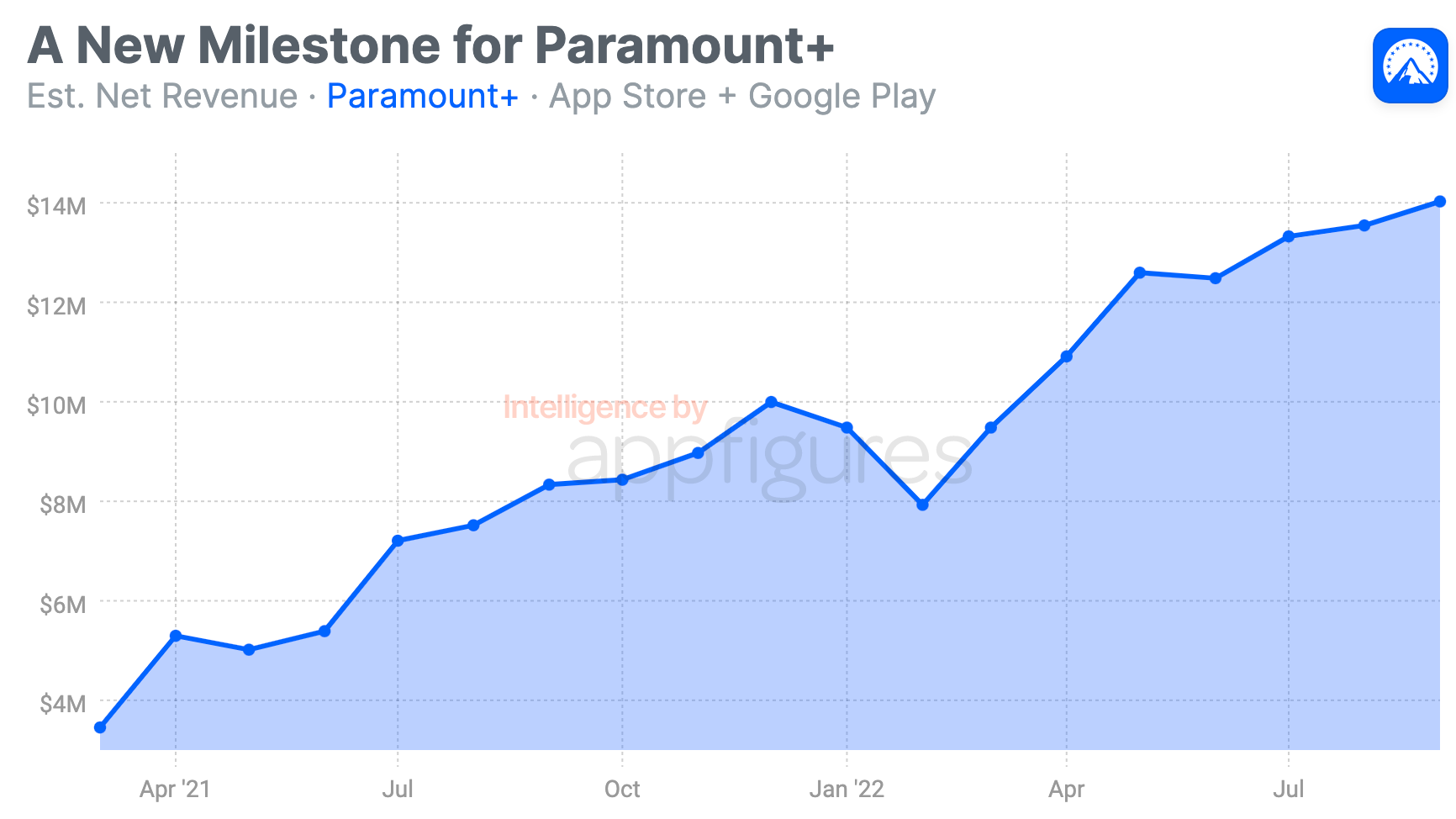 The road to this milestone was long. Although it took Paramount+ only 5 months to hit $10M in gross MRR, doubling to $20M took 19 months, according to our estimates. Of that, Paramount gets to keep $14M as net revenue.

It's also important to mention that Paramount+ is only available in the US, which limits its ability to monetize when compared to someone like HBO Max, the leader of the streamers, which earns that in about a week while being available globally.

Fun fact - HBO Max earns from Google Play just a tiny bit more than Paramount+, which is to say, there's still room for HBO Max to grow its revenue.