1. Peacock Scores BIG Thanks to the World Cup!

The World Cup is on at full force, leading millions to download apps to stream it all around the world. Last week I looked at where US viewers are streaming the games, and while Peacock was the leader in downloads, it wasn't the app with the most growth.

Peacock's lead extends beyond downloads and to revenue.

Thanks to the World Cup, Peacock is now seeing the highest in-app revenue it's ever seen. Ever! 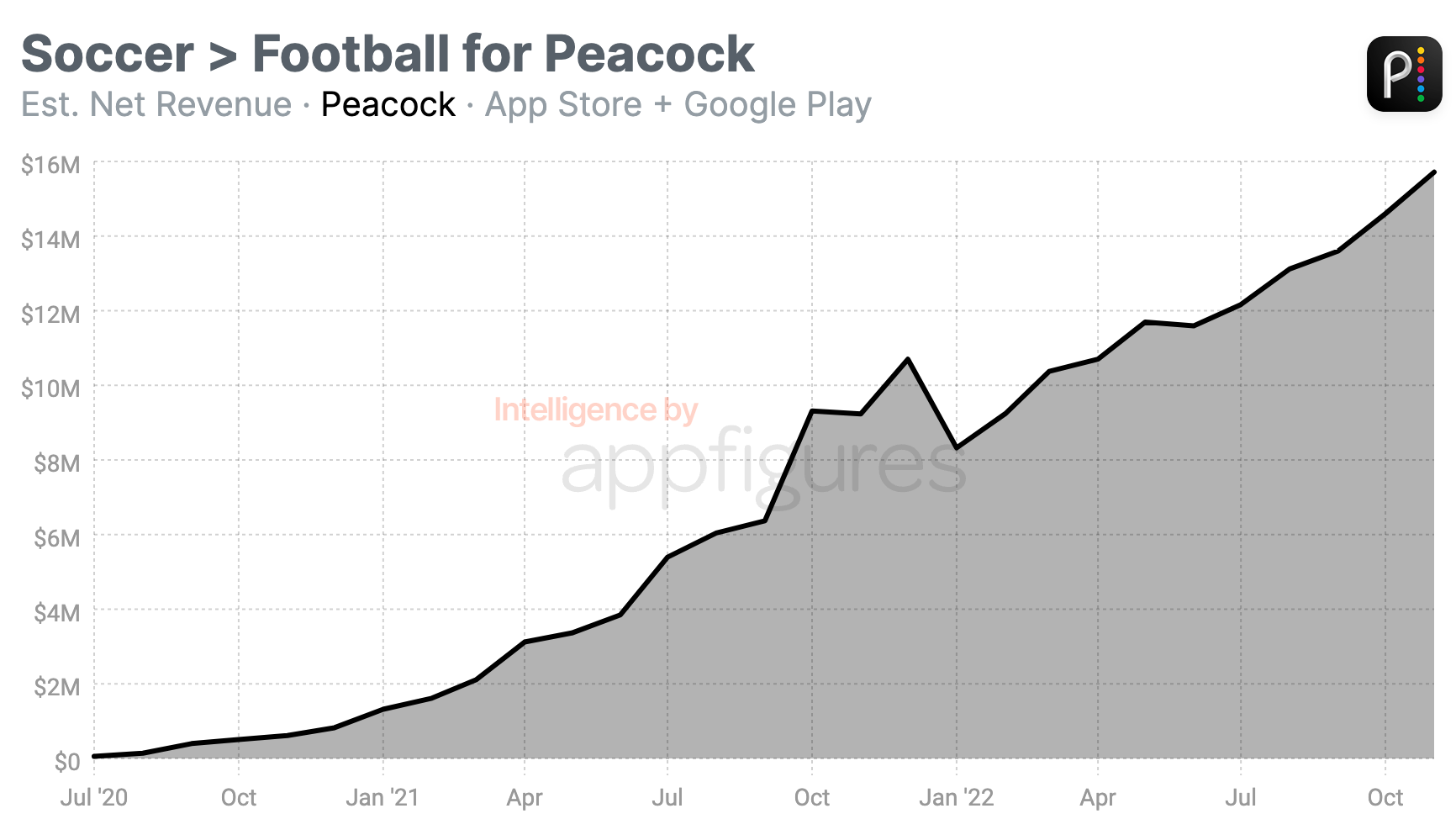 According to our estimates, Peacock, which launched in mid-2020, opened 2022 with a little over $8M of net revenue in January. Net meaning what NBC gets to keep after giving Apple and Google their fees.

In November of 2022, which just ended, Peacock's net revenue ballooned to $15.7M. The highest month of revenue the app has seen since its launch.

The majority of this revenue, 12.7M (or 81%) came from the App Store, where its been growing consistently every month since launch, with a few minor exceptions.

If you're a developer, and not just of streaming apps, you should keep that in mind because I expect that to become a major trend in 2023 for more types of apps and games.

2. Downloads in Qatar Are up 116% in This Category

So far, I've looked at streaming app downloads in the US -- where many are skipping cable and instead streaming the World Cup on their phones. But the games are in Qatar.

How are the locals watching the games?

Instead of "how" I should really be asking "how many", because the answer to "how" is too simple -- they're streaming! 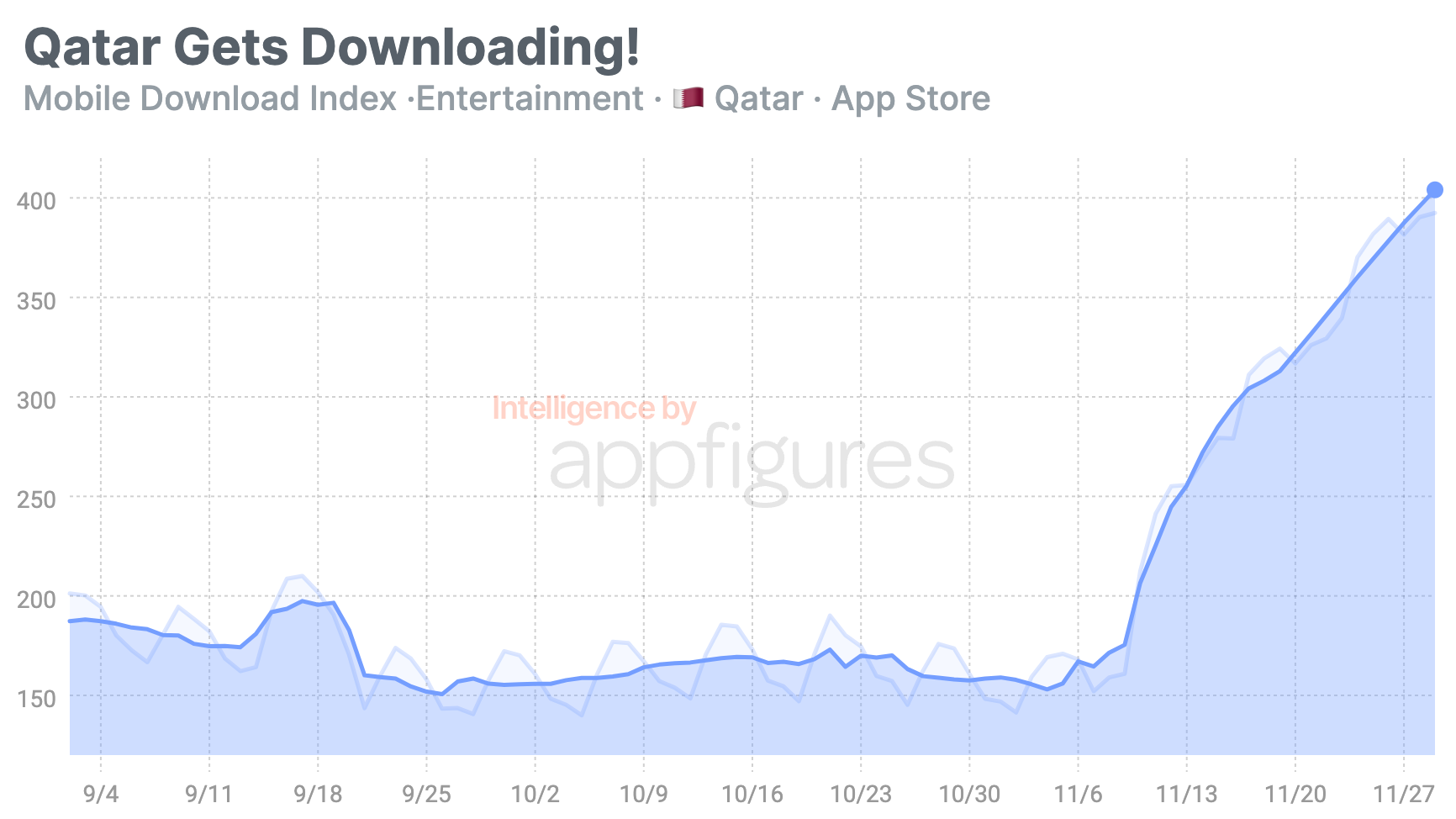 To get a broad view of downloads in Qatar I took a look at the Mobile Download Index for Qatar and the trend is hard to miss. Even if I were only skimming the charts!

The index for the _Entertainment_category in the App Store, the category that's home to all streaming apps, has grown 116% since the games began.

The sharpest increase in growth in Qatar,

Wait, what??? In case you're not familiar, the Mobile Download Index charts the downloads of the top apps in each category and country over time so you can quickly see if it's growing or shrinking and by how much. The Mobile Download Index is a free resource many developers rely on to give their own trends context. There's also a Mobile Revenue Index

Yes, streaming is the future.

3. 2022 Was a Confusing Year for Meditation Apps

Calm and Headspace, two apps that rose in popularity during lockdowns, are having the weirdest year so far in 2022.

First, let's talk about demand. That's not the weird part. 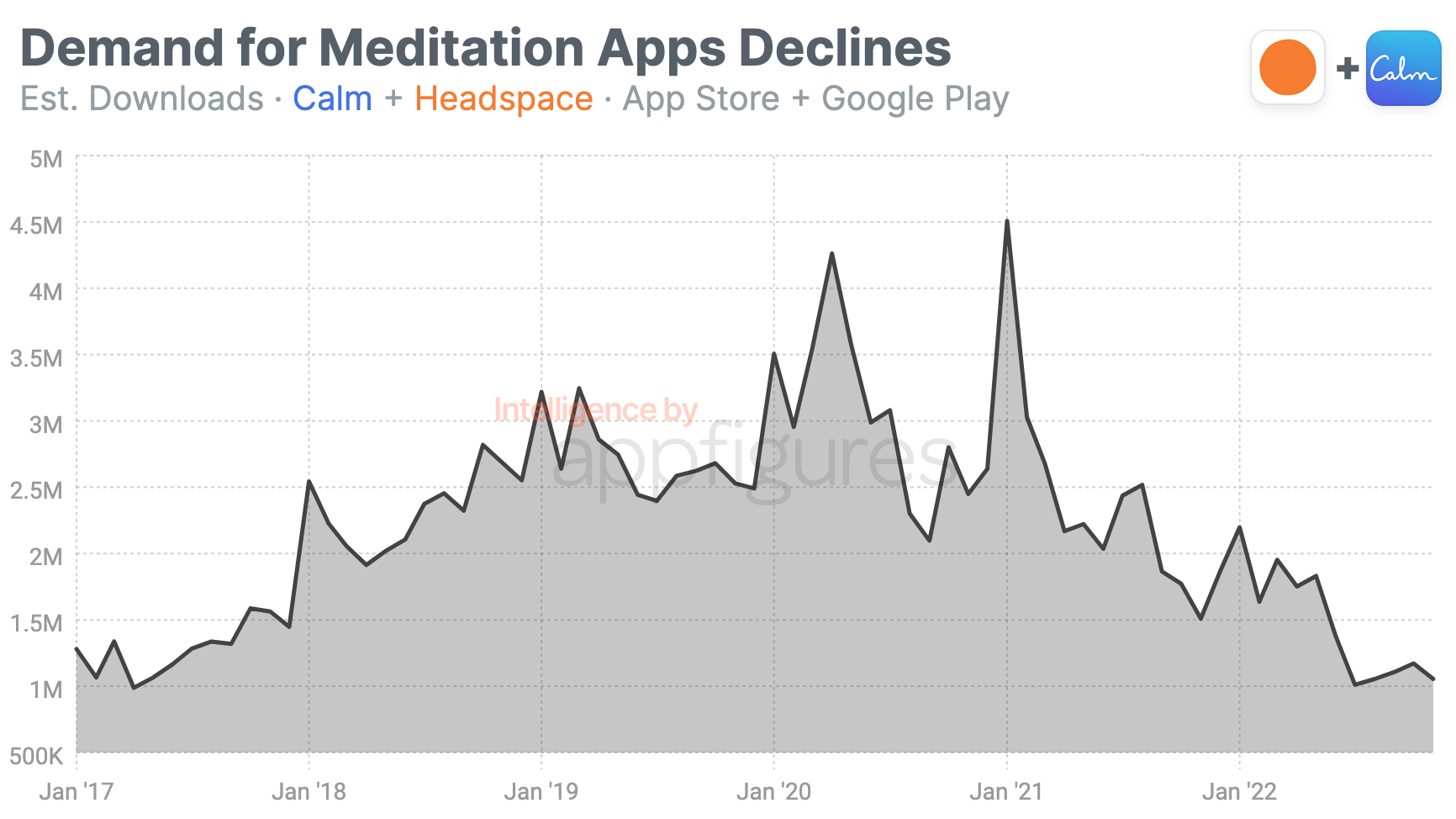 According to our estimates, combined monthly downloads of Calm and Headspace averaged 1.2M in early 2017. They climbed throughout 2018 and 2019, peaking once in 2020 with 4.3M downloads, and then again later in the year with 4.5M downloads.

Many expected this trend to continue, but right after that last peak, downloads started dropping, and fast. The couple ended 2021 with 2.2M downloads in December. Higher than where they started, but still roughly half of those peaks.

The downward slope continued in 2022, and at the end of November, downloads dropped to just 1M for the pair, according to our estimates. Lower than 2017.

Although there's a lot to stress over these days, lockdowns have ended and for many, life has returned to its scheduled programming, so this decline makes some sense overall, but... while demand has slowed down back to 2017 levels, revenue is moving in the exact opposite direction. That's where the confusion comes from. 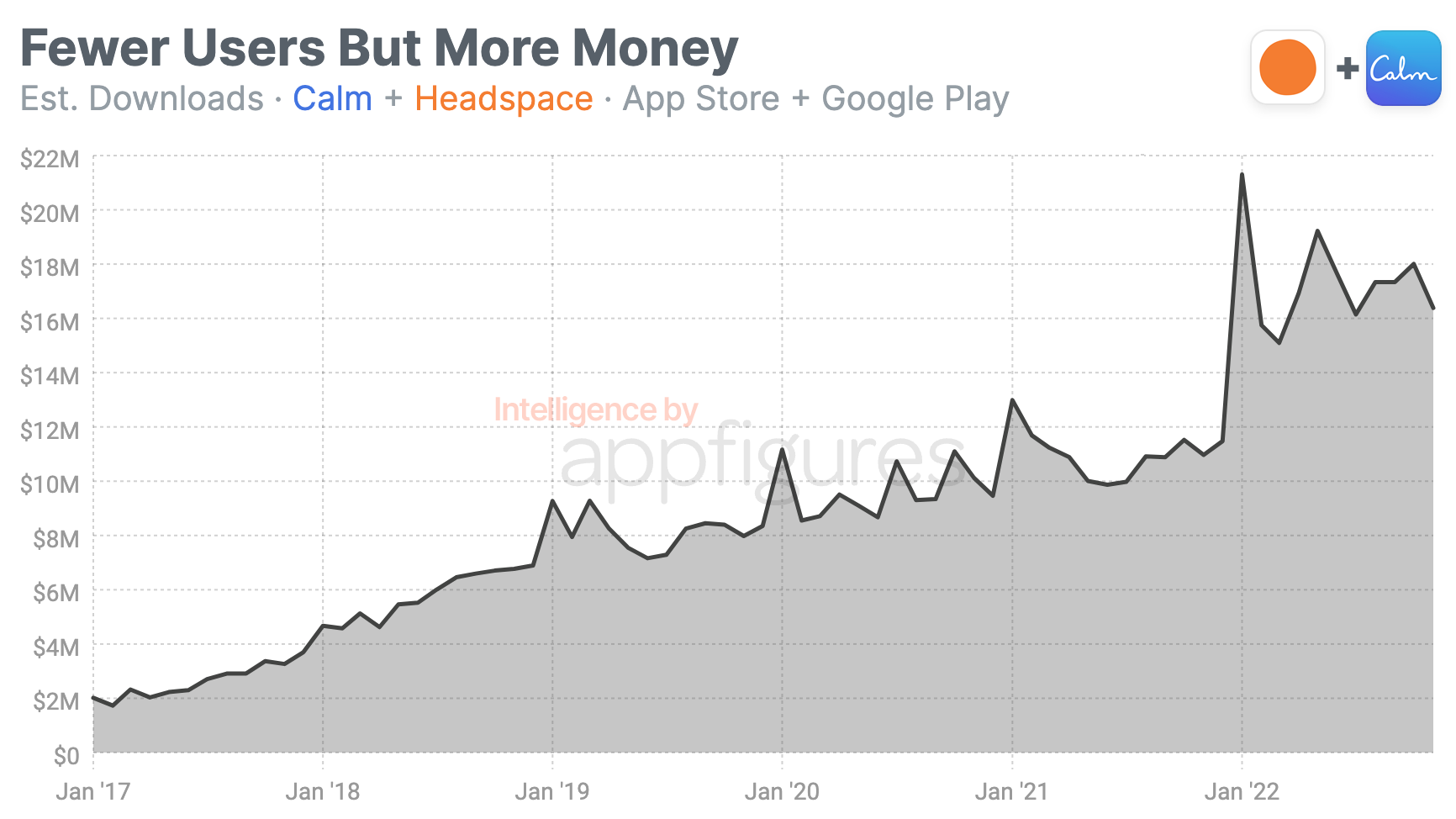 To give you better context - in 2021, the pair brought in $132M of net revenue from the App Store and Google Play. As of the end of November 2022, the total for the year has exceeded last year's. And by a lot!

Our estimates show net revenue in 2022 totaling $192M. And that's without December, the strongest month of the year for both.

Nearly double the revenue with less than half of new users. Confusing!

Demand != revenue. Many developers, especially indies, believe that to make more money you need more users. While that's generally the case, optimizing pricing and retention are as necessary, if not more, to the success of any app.

A new app has climbed to the top of the charts in the US App Store. Yawn, right? Not exactly! This one's a bit different.

Lensa AI is a photo editor that uses AI to generate artistic and very sharable avatars, and also offers the ability to remove backgrounds from images. Put a pin in this feature for now - it'll be important once we talk about Apple Search Ads.

Lensa's downloads, and revenue, another item to pin for now, have both grown drastically over the last few days. 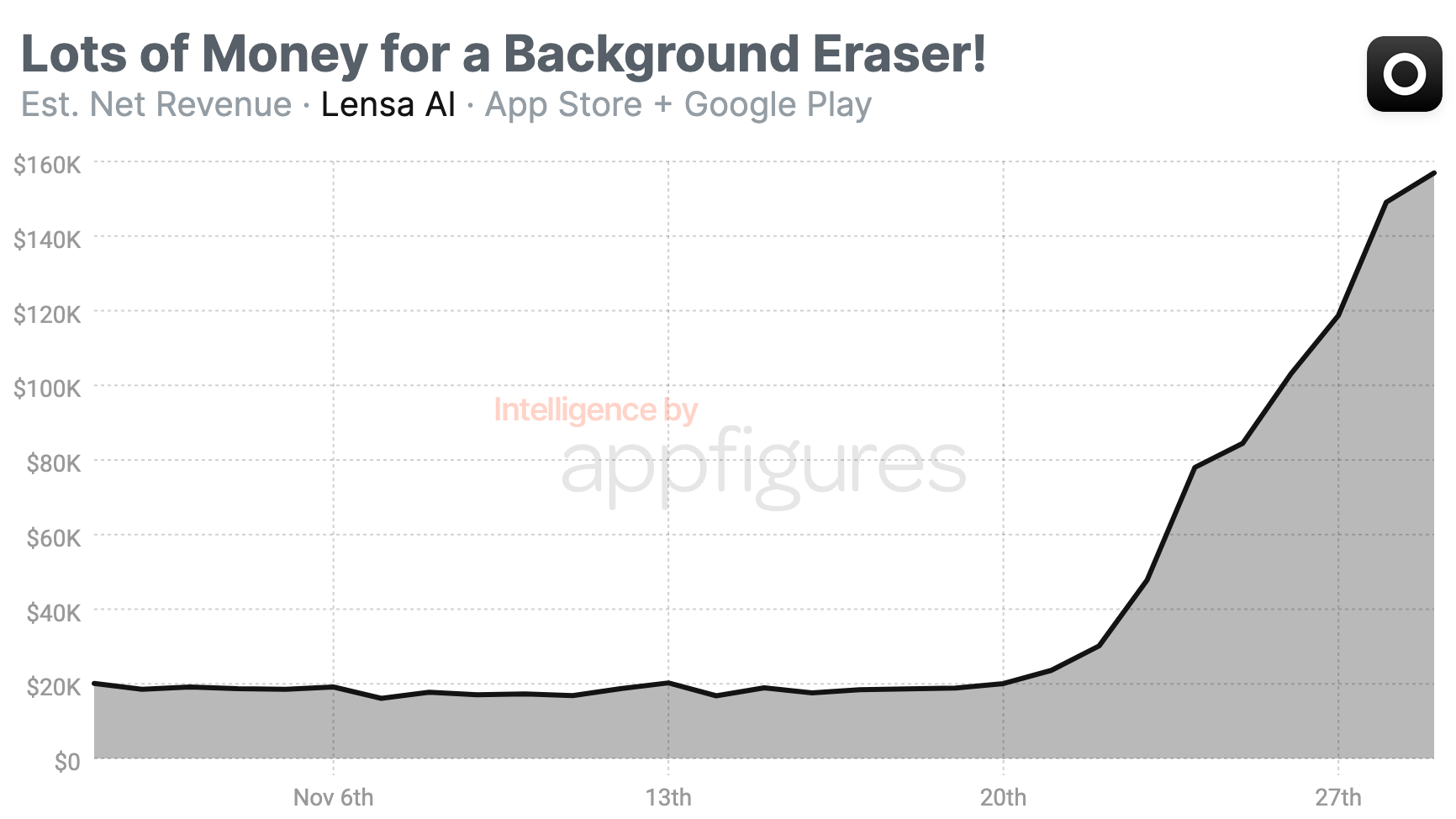 Even though Lensa isn't a new app, its downloads and revenue are currently at the highest they've ever been!

According to our Top Apps Chart in the US, Lensa is the #2 app in the US App Store. And according to our estimates, downloads climbed as high as 3x the last peak on Tuesday as Lensa hit 232K downloads worldwide from the App Store and Google Play.

That's a massive increase from the previous month, where daily downloads averaged 8K.

And while downloads are high so is revenue! On Tuesday, net revenue exploded from around $16K on a standard day to nearly $160K. And that's net, meaning what the company gets to keep after handing Apple and Google their fees.

It's become fairly normal to see apps rise to the top of the charts quickly but those usually don't bring in revenue immediately.

Although the app is mostly known for its avatar generation, Lensa AI seems to be using Apple Search ads to tackle a different use case. According to our ASA Intelligence (coming soon), Lensa AI is targeting a wide variety of keywords that all have to do with erasing backgrounds.

And we're talking a lot of combinations. The kind someone spent time coming up with instead of clicking on Apple's keyword suggestions with a broad-match campaign. If you're doing that please don't.

Targeting a specific feature with many keyword combinations, especially if it's popular but not too expensive, is a great way to run a lean campaign that's ROI-positive.

If your ASA campaign isn't ROI-positive you should spend time optimizing it. But I digress...

Why is revenue so high? The app uses what some praise and others consider a dark pattern - it ends its onboarding with a paywall that starts a free trial, essentially tricking those who aren't paying too much attention into starting a "free" trial.

5. Two Years in, Shop Is Having Its Best Season Yet!

A couple of years ago, Shopify rebranded its package tracking app Arrive into a hub for shopping that brought Shopify's payment system into millions of devices and also gave local businesses using Shopify visibility.

Back in 2020, I thought this was one of the most clever moves in the shopping industry.

Shop has grown its downloads every holiday season since launch, but 2022 is going to be the biggest of all. 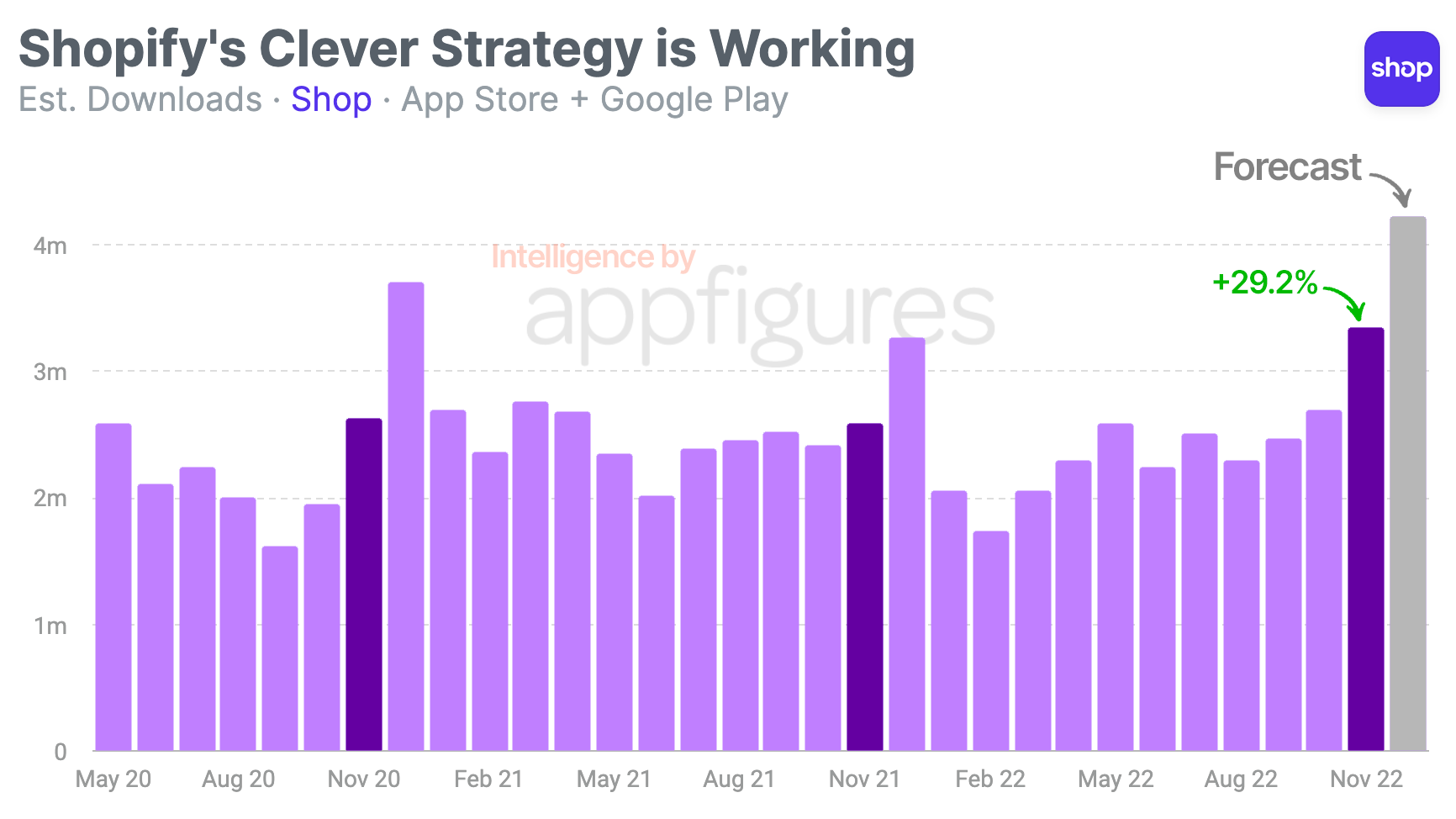 Shop's best season is the holiday season when everyone is buying something online. Shop's shopping features are still not that mainstream, nor is its payment system, but with every holiday season, those features make their way into millions of pockets.

To see how Shop's growing, and estimate what the holiday season will look like, we can compare the downloads from past Novembers with the one that just ended.

If you're looking at the chart, I highlighted those so you don't look at December by accident. I did that because November of 2022 was bigger than December, Shop's best month of the year, for both previous years.

If downloads continue following the same pattern, I expect Shop to make its way into 4.2M new iOS and Android devices.

That's big for Shop but also for the payments industry. Why? Because every download of Shop means another user can now pay with Shop Pay, a service that competes with Apple Pay and other payment services.

It's a clever step in Shopify's aggressive strategy to take over the marker. I call it aggressive, and if you've used Shop Pay you know this already because Shop Pay doesn't wait for you to activate it but rather automatically springs into action whenever possible, attempting to streamline the payment in supporting sites/apps before you even ask.

The first time it did that to me I was pretty confused and had no idea what it even was, but... the convenience eventually won me over. I imagine that's a part of the strategy.