If you've been around for long enough, before the time of Apple Music, Spotify, and even YouTube (that's right!), you might remember a little online radio service called Pandora. You pick a song, and it turns it into a "station" using its own intelligence.

Fast forward what feels like a million years, and Pandora is still here. It's now a streaming service just like the rivals that overtook it—by giving listeners the ability to choose their music—but Pandora is now just like them. Downloads and revenue, in the App Store agree.

While the streaming game is fought on brand just as much as App Store searches, the latter is pretty powerful considering the market has become very competitive, and earning people's attention has become considerably more expensive. Reminder, ASO is free.

Overall, Pandora earns a B-

Pandora by the Numbers

Here's how Pandora is performing in the U.S. App Store, based on our Competitor Intelligence:

Between Spotify's fight with Apple, YouTube's neverending catalog, and loads of competition from other small and large players (no pun intended), is Pandora, a service that pre-dates the App Store.

Also, the #2 music app right behind Spotify (which we covered in season #1) in downloads and new ratings in the U.S.

Pandora's no lightweight when it comes to revenue. In 2019, Pandora earned more than $153M in the App Store alone. That's based on our estimates, which don't include Apple's fee, so it's what Pandora actually got. 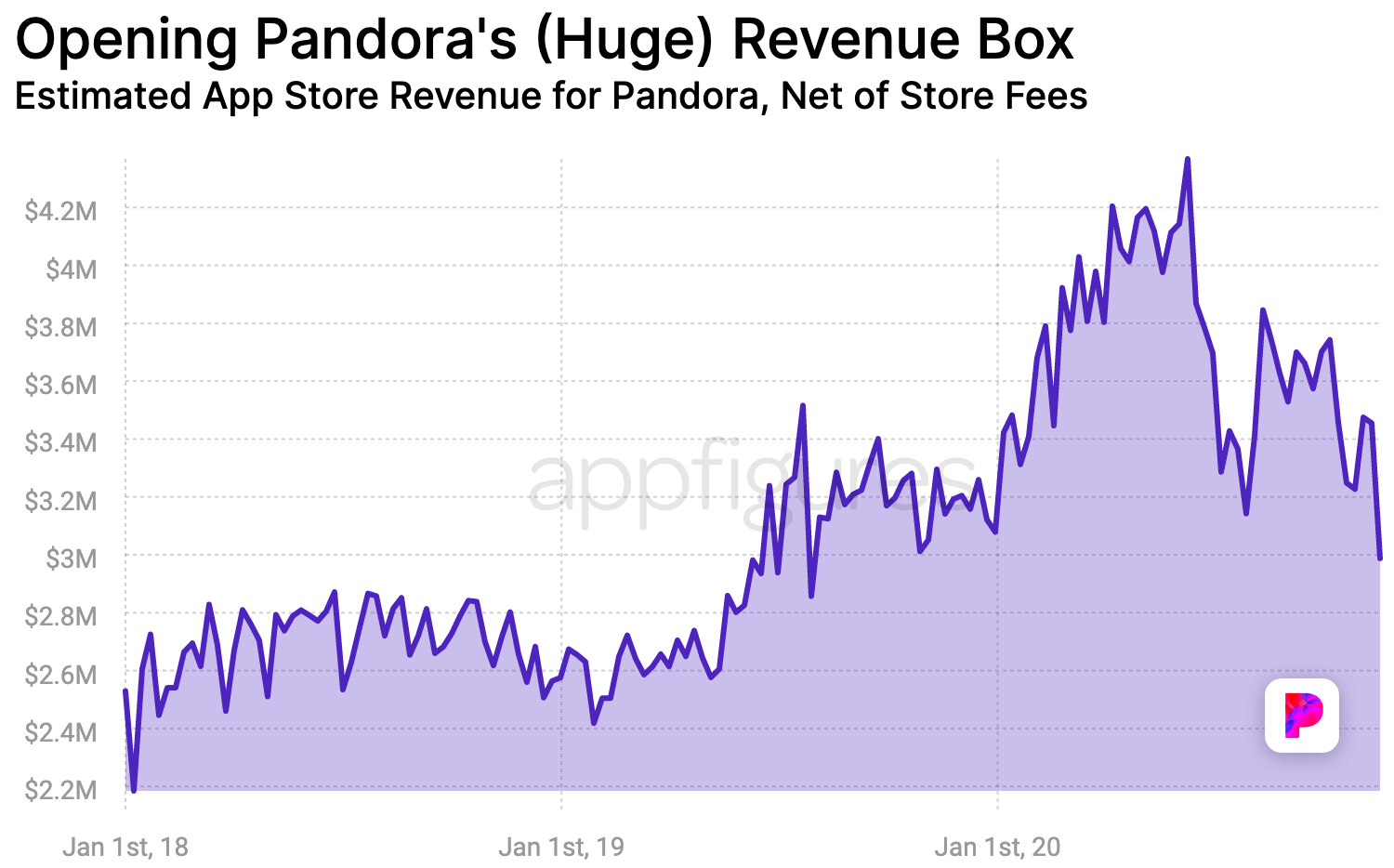 But that's where the positives start to slow down for Pandora.

Let's kick off the analysis with the keywords Pandora is using in its name and subtitle. Those send the strongest signals to the App Store's algorithm.

For all intents and purposes, this is a decent set of keywords. If you are Spotify...

Pandora's strategy of copying the keywords of its biggest rival may seem solid, but really it isn't, and that's why you won't be able to find Pandora is too many searches that don't include its name. 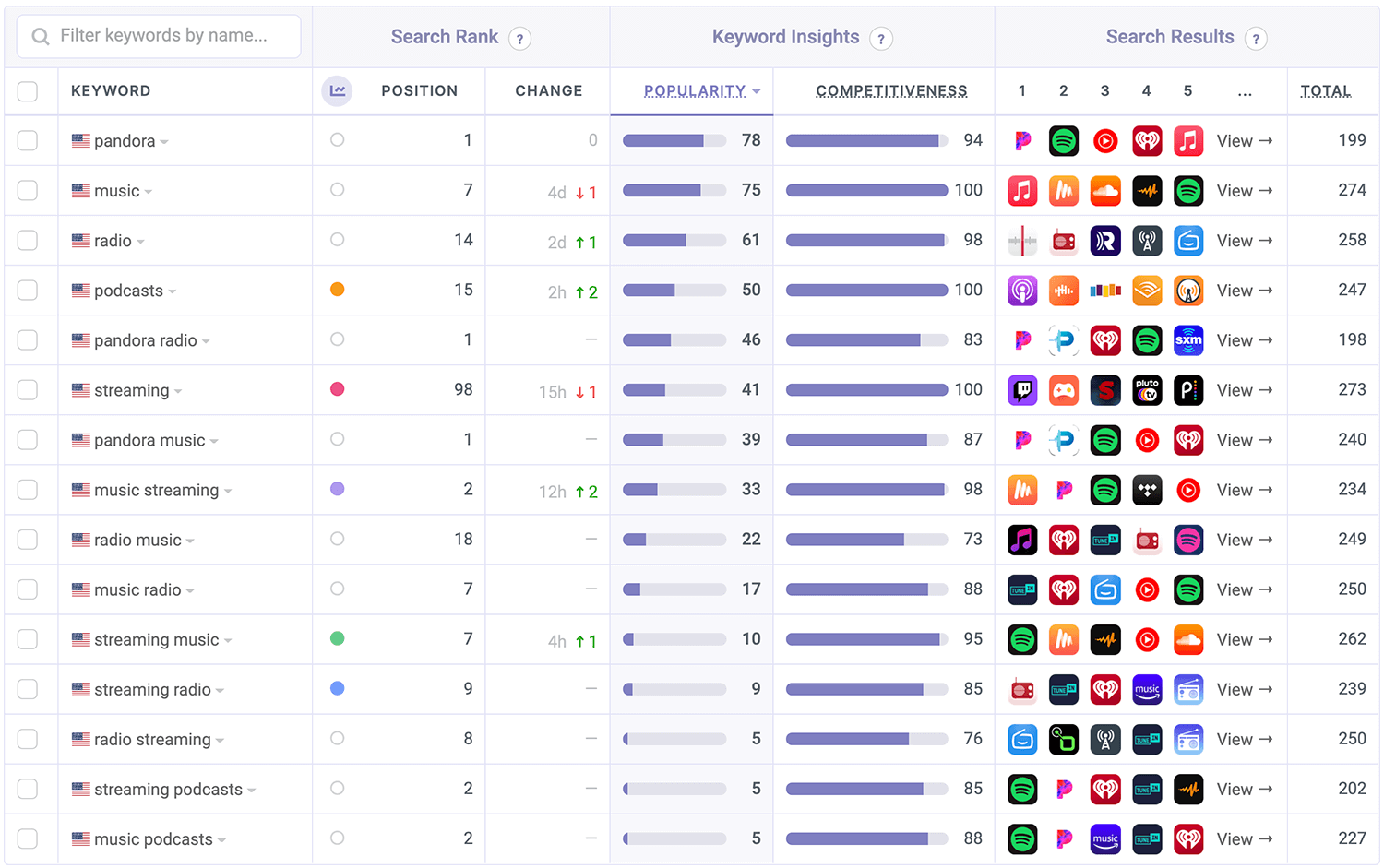 This is a big miss in my opinion, and goes to show that just having enough downloads isn't a sure-fire way to get ranked.

The primary lessons here are:

Not a bad list, right? Wrong. Pandora is competing and hard, choosing a bunch of seemingly-relevant-but-otherwise-generic words doesn't qualify for a good keyword list for a variety of reasons. For starters, these don't really combine well with each other, so Pandora is technically competing for every individual keyword. And that's just hard.

Competing in a segment where lots of seemingly-relevant-but-otherwise-generic words are the norm requires getting clever. What can Pandora target that is relevant, popular, but different? The content it's streaming.

Barring any legal implications, Pandora has a huge catalog of relevant, (some) popular (true crimes podcast has a popularity score of 33), and different keywords it can use to capture attention and downloads. If it tries to get clever.

Where Else is Pandora Ranking?

This combo of name, subtitle, and keyword list gives Pandora a bit more than just the name and subtitle alone. Here are some of the highlights: 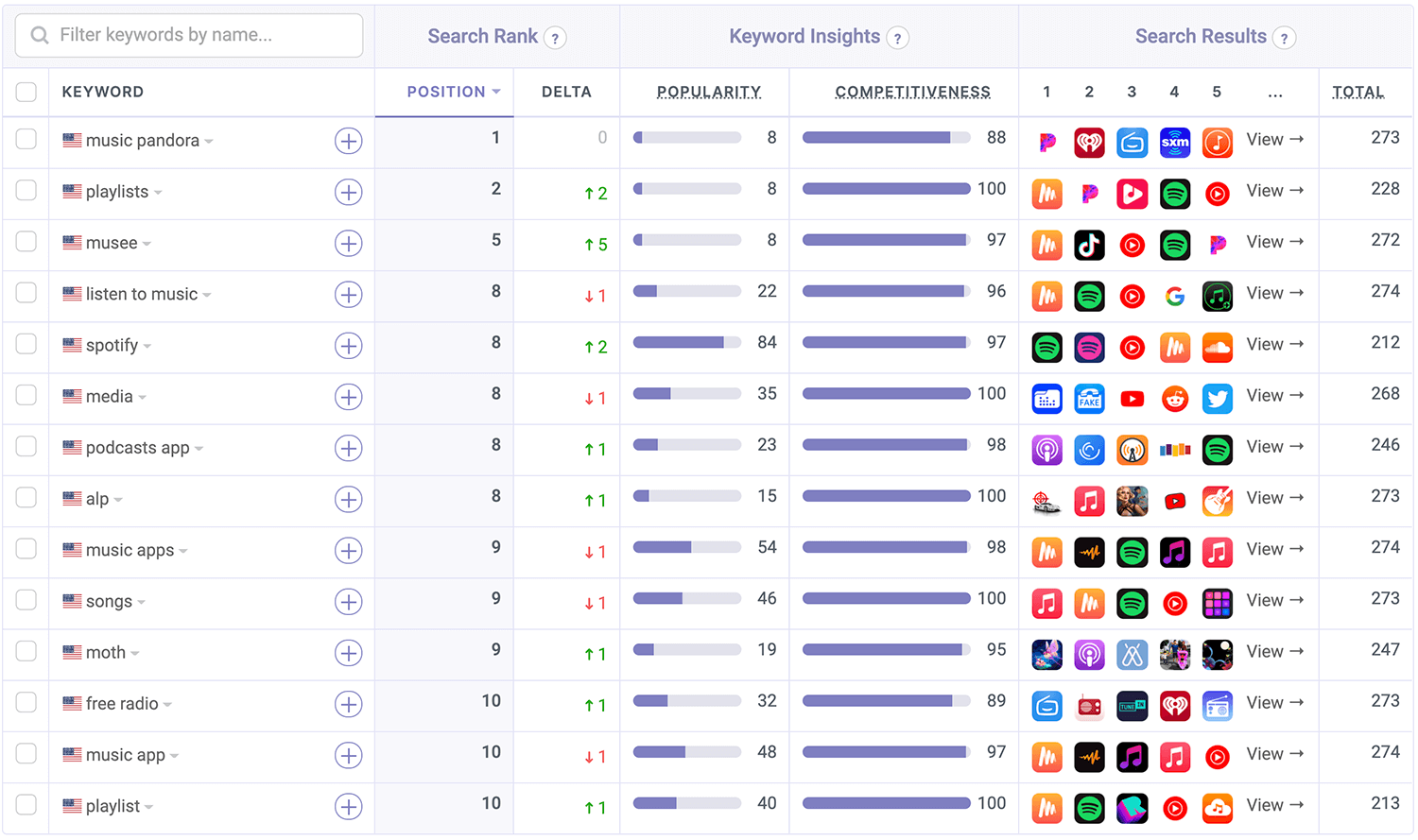 Remember how I said targeting generic keywords isn't the best way to get top ranks? We can clearly see that when looking at the keywords Pandora's ranked in that it isn't targeting directly.

When filtering out low popularity keywords and ones where the app ranks below #10, we end up with very few keywords. For the most part, those aren't even very good. 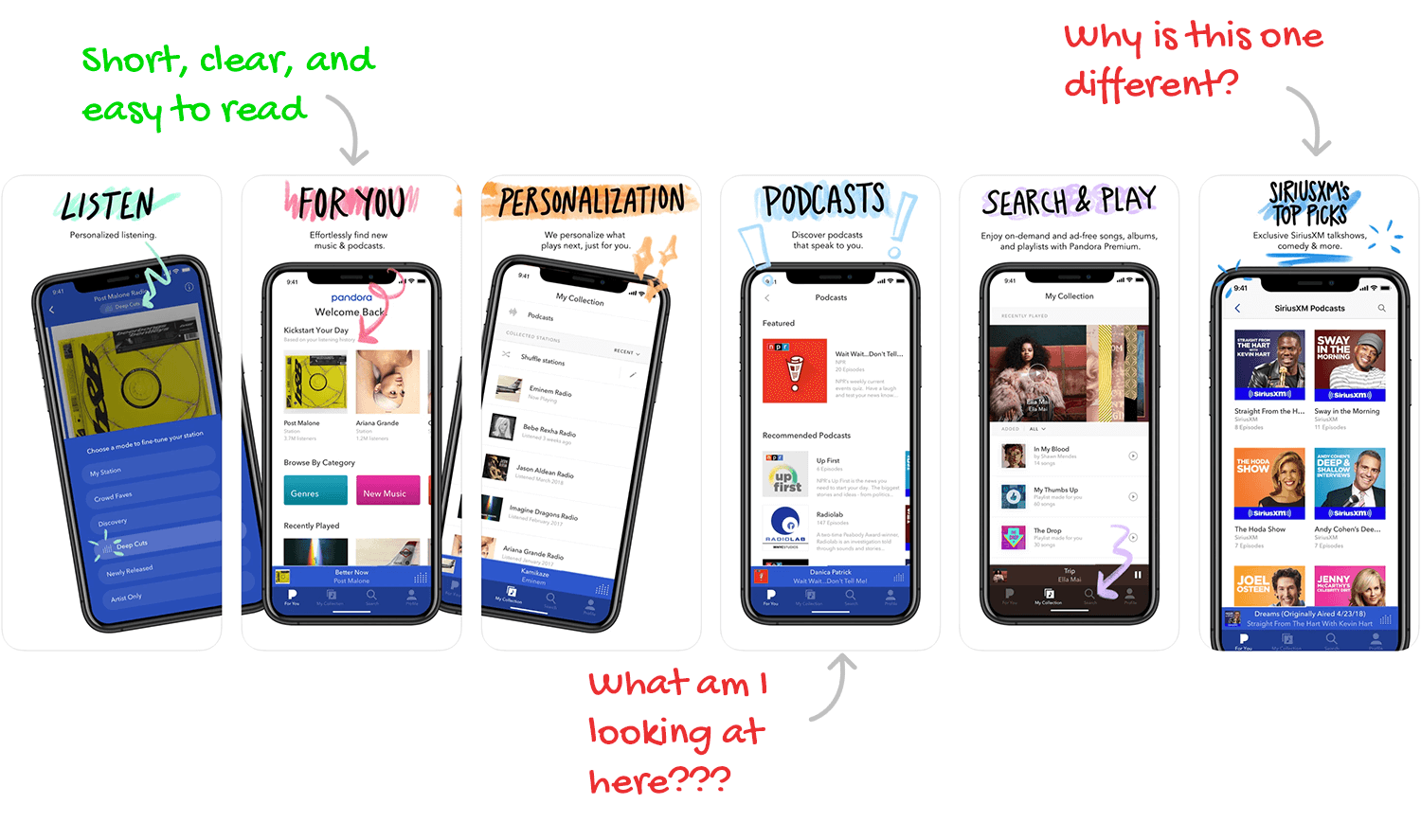 But the most important task of the screenshots is to connect with the user and "sell" the app. Pandora's screenshots don't really do that for me. The UI isn't showing things that excite me at all, just the app's layout.

Compare these to Spotify's, that highlight people, and popular ones, too.

Just like the bland mix of keywords we looked at before, the screenshots don't highlight what's unique about Pandora. And judging by its revenue, there's enough unique to the app that makes people want it. The screenshots should highlight that.

Pandora isn't using an App Preview video. Spotify, Amazon Music, and YouTube Music don't either. Why? Because they're "selling" music, and that's hard to visualize.

But... Pandora has a past that makes it a bit different, and those of us who used it back before the iPhone even existed will forever think of it as what it used to be and not what it is. A video can change that.

I don't normally analyze the app past the download, but I can easily argue (and I have) that keeping the download is as important as getting it in the first place, and user onboarding has a lot to do with that.

At that, Pandora fails miserably. There's just so much friction. 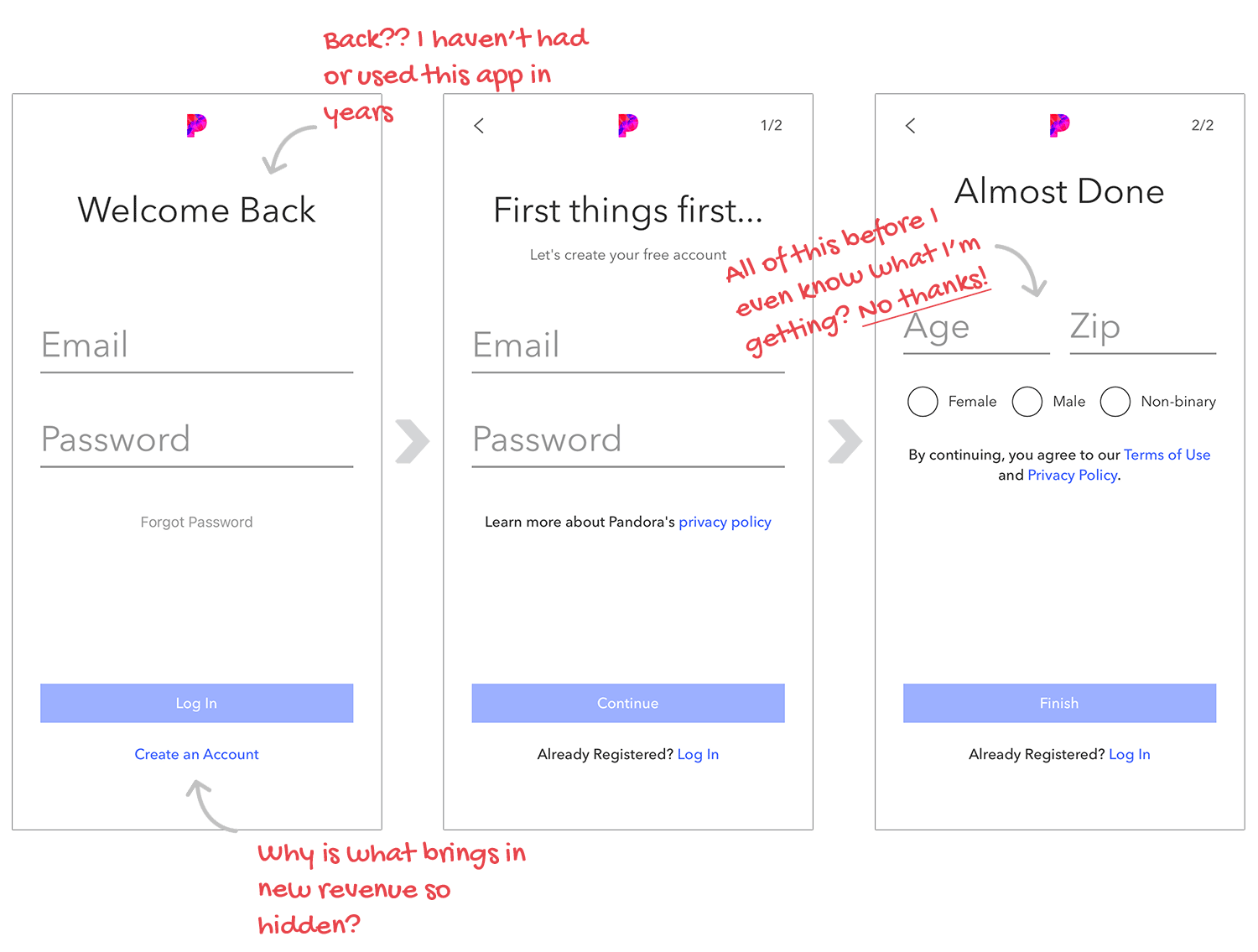 If you managed to type a keyword into the search box where Pandora is ranked high and decided its screenshots showed something you liked and downloaded it, after that entire journey, Pandora will prompt you for your 1. email, 2. a password, 3. your age, 4. gender, and 5. zip code.

All of those are required.

Why is this bad? Because you've worked so hard to get the download, and you won't get anything from it. If anything, it'll generate biased analytics, so you may make the wrong decisions in the future. And if this were Google Play the algorithm would actually penalize you for not getting engagement for your downloads.

I said this already but will say it again, competing in popular categories like this one requires getting clever and not just copying and pasting. There's a lot that's unique to Pandora, which it can leverage to earn more App Store downloads for absolutely free.

Pandora certainly has the downloads to put up a serious fight, but without the right strategy, user acquisition and conversion will continue to be a very costly (and potentially unsustainable) practice.

The Tools I Use to Analyze & Optimize