Keyword Teardown #6 - Is Your Category Hurting Your ASO?

Apple's and Google's algorithms may be black boxes and don't come with any documentation, but if you look at enough sets of results, patterns begin to emerge. Today we'll look at several sets of results and explain why they are the way they are, using real keywords, real results, and lots of tips you can use to improve your ranks!

Learning how to play an instrument is something most have on their bucket list. We already looked at the playing piano in Keyword Teardown #2, so now it's time to look at my favorite instrument—the guitar. 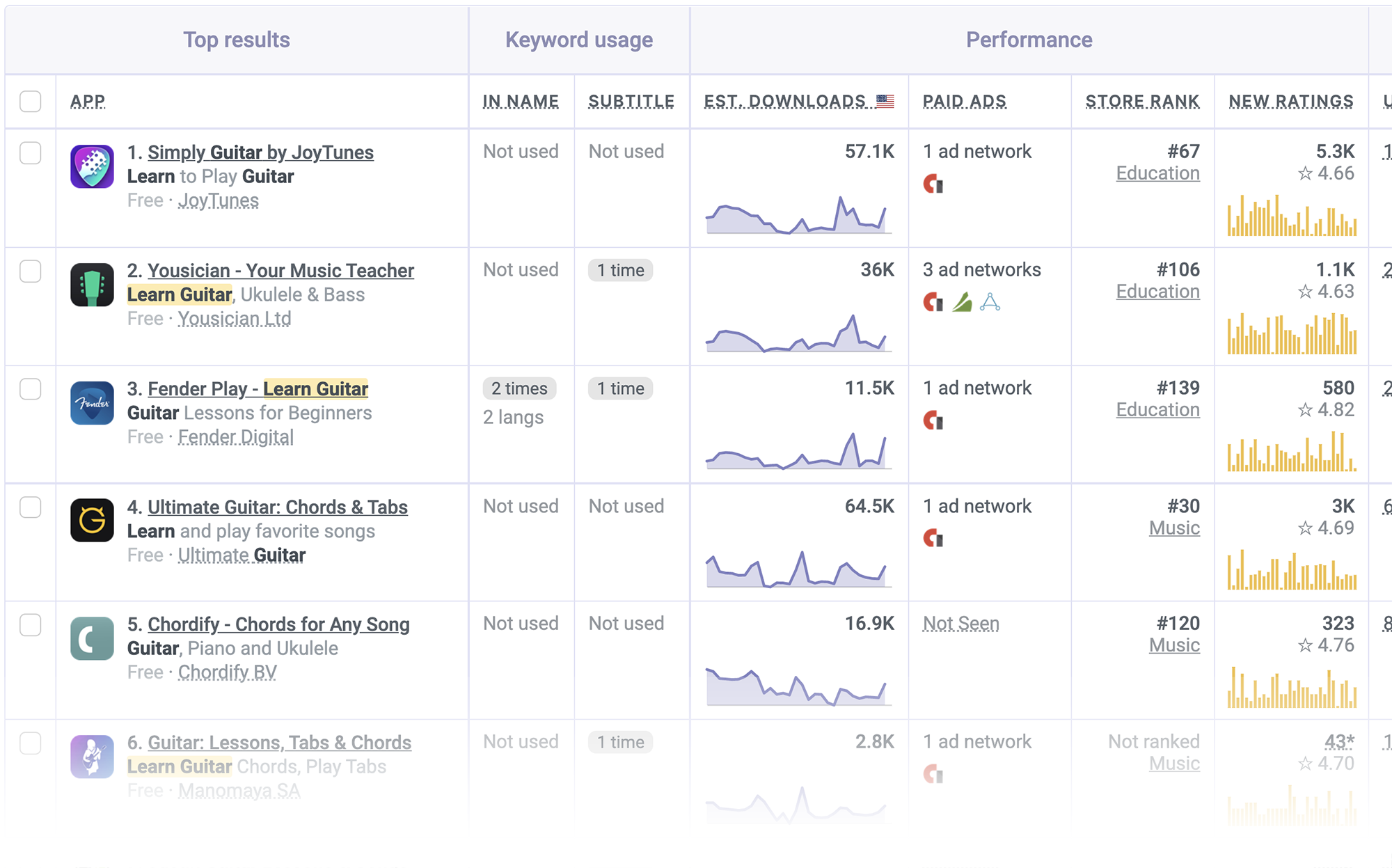 At first glance, I expected the keyword to be a bit more popular, but between the number of results and competitiveness score, we can tell lower popularity != easy to rank in.

Interestingly enough, the folks behind the top result for "learn piano" also have the top result for this keyword. Nice! Simply Guitar wins this even though the keyword is in the app's subtitle and not name by having a massive number of new ratings. Remember, ratings really matter.

Right behind it, we have Yousician, which also only has the keyword in the subtitle but also has fewer new ratings, so it's stuck at #2.

And behind Yousician we have Fender, the first of the set to use the keyword in the name. But, at about half the new ratings as Yousician, the algorithm can't help it up.

Ultimate Guitar, which I analyzed in season #1 of App Teardowns, isn't exactly a guitar learning app, but it uses the keywords correctly to give the algorithm enough reason to include it in this set.

Curiously, however, it isn't higher even though it has a hefty amount of new ratings and seemingly good keyword placement. Why? I'm not 100% sure about this, but I believe it has to do with the category Ultimate Guitar is in.

I'm still exploring this relationship, but so far I've seen it a few times, so I believe that's the key here. If you have a better explanation, please let me know.

Last on this list is Chordify, which doesn't include the word "learn" in its name or subtitle. It most likely has it in the keyword list, and since most other apps the algorithm has to pick from don't have more new ratings or use the keywords correctly, it manages to snag fifth.

I'd call it luck, but really, it's the lack of competition that allows it to rank there. I explored the list of results deeper, and most other apps there don't have a chance, but a few do if they try. I'm looking at you, Gibson!

When you master guitar, or really any instrument, the next frontier is tempo. And for that, you need a metronome, another popular keyword. 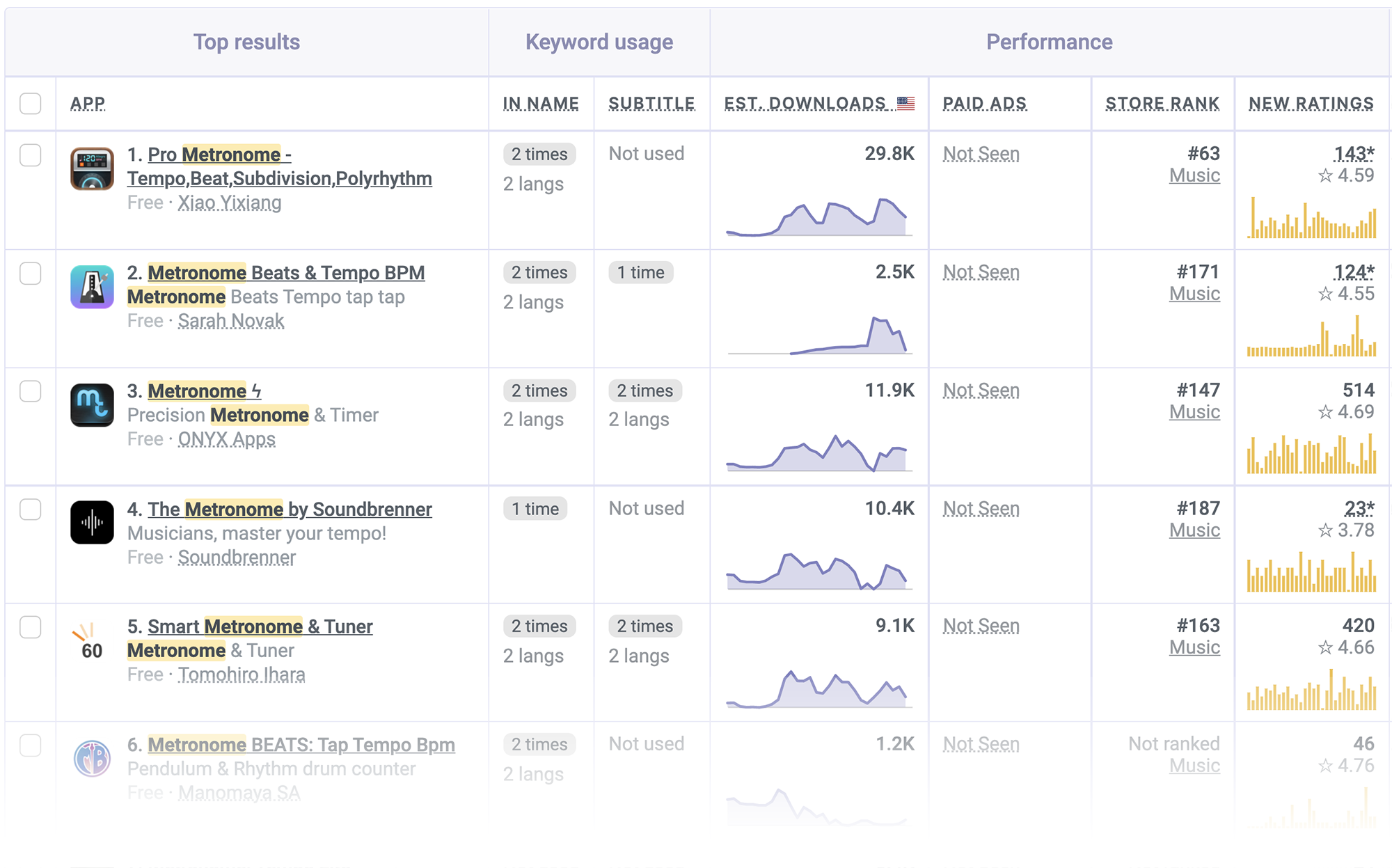 At first glance, I think I see a pretty simple list of results, but this one's full of weird ones that are slightly harder to explain. Let's take it from the top.

The first app, which hasn't been updated in 6 years!!! is the leader in downloads but not in new ratings. It's not that far off from the rest, but certainly on the lower end. It snags first by not having a subtitle and by having the keyword as the first thing in its name. It also has 49 characters in its name...

It's definitely an unfair advantage, and Apple should be doing something about it, but because six years ago this wasn't a requirement, this app can have 49 characters in its name.

The second result is the first repeat offender (see what I did there). Duplication is hurting it, but it also has fewer new ratings, so the algorithm doesn't have too many options.

But then we have an app with more downloads and new ratings, and better keyword focus, at #3. Why is it not 2nd? We've encountered the second weird thing in this set. The second result, which has a completely generic name, has a promoted in-app purchase which gives the algorithm more reason to rank it high. It's not something we see often, but it's similar to the bundle trick we saw in Keyword Teardown #4.

The fourth result, Metronome by Soundbrenner, is fairly in line with #3 having fewer ratings and downloads. In fifth, we see, again, a bad case of repetition, so even though Smart Metronome has more new ratings than #4, the repetition devalues the keyword enough to distract the algorithm.

For the sharp-eyed readers who counted the number of words in both names, removed the duplication and compared. The reason #5 can't go higher is because #4 has the keyword only in its name while #5 has it in the subtitle. To succeed with that, they'd need many many many more new ratings. And even then, only maybe.

And to wrap it up, we'll look at another accessory guitar plays reach out for often—a tuner. I've had the same guitar tuner app on my phone for so many years I don't even remember when I downloaded it. Sadly, it didn't make the top 5... 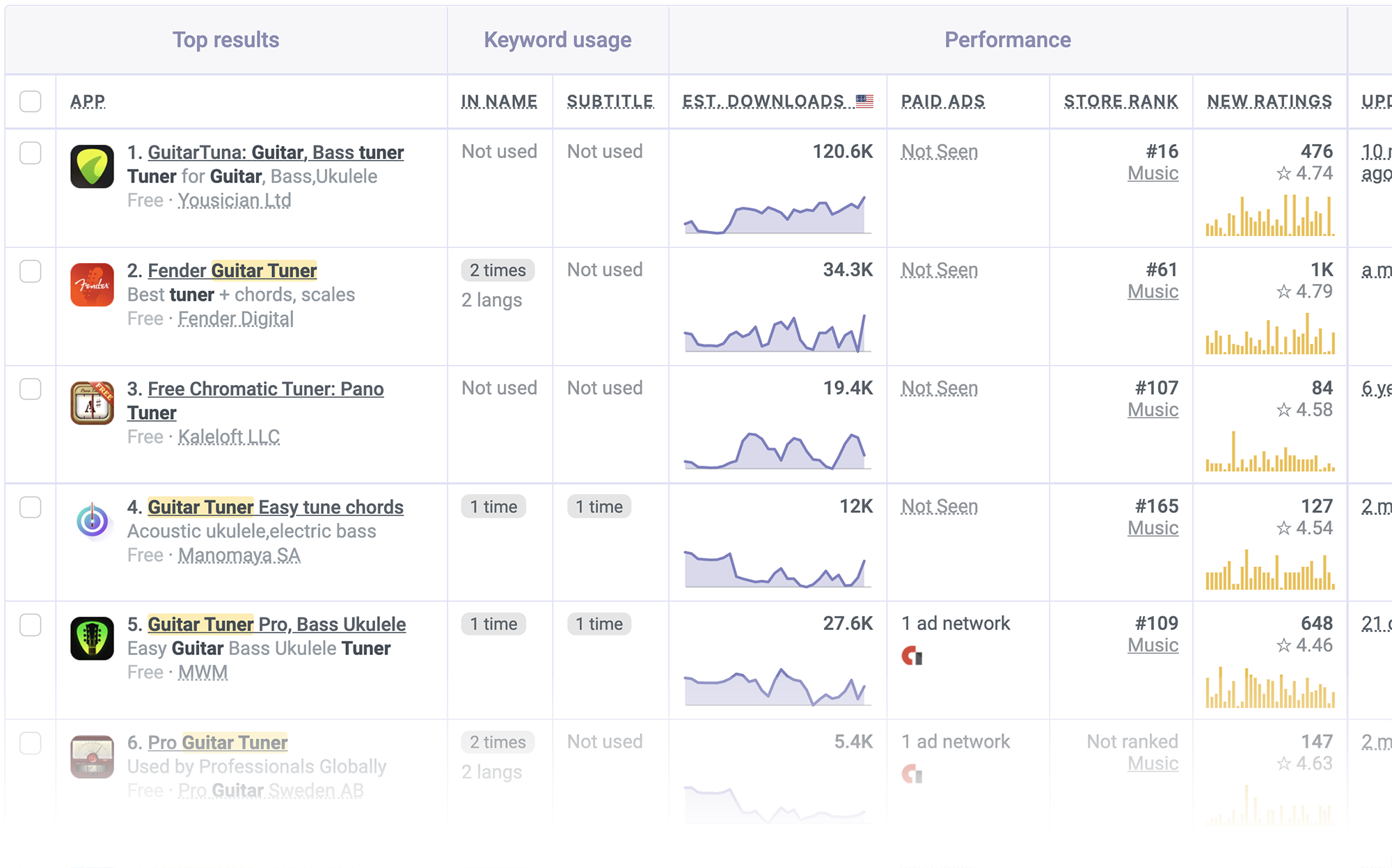 At first glance, I see that many apps are targeting this keyword, but the algorithm has a lot of data to use for sorting, so it's pretty straightforward.

The leader of the group, GuitarTuna from Yousician, has the most downloads but not the most ratings. It manages to snag first by doing something that's bad, but focusing on it. In case you didn't read the last Keyword Teardown, that something is excessive repetition that accidentally leads to focus.

In #2, we have an interesting situation. Fender's guitar tuner has more new ratings but fewer downloads. It almost does a great job with keywords, focusing its name. But... It repeats a portion of the keyword in the subtitle, which devalues it.

Removing the duplication should help Fender advance and take over #1 even though it doesn't have the downloads. If you're reading this Fender and end up making the change, please let me know how it goes!

In case you're looking at the two names and thinking Fender has fewer words and as such each should have more weight... After removing duplication, it's actually the opposite. Fender has six words, and GuitarTuna has five.

In #3, we have another interesting one. Pano Tuner does not mention the word "guitar" in its name or subtitle. Yet, it's ranking 3rd. How's that? There's an obvious answer: the keyword list. Let me rewind a bit. Pano Tuner doesn't have the downloads or new ratings to beat the apps below it, but it uses the trick I talked about in Keyword Teardown 4, and that is forgoing the subtitle to put all the focus on the name.

This trick isn't enough to get it up any higher, and if the two below it get smart about their keywords and ratings, it's doomed, but so far, so good.

#4 has the keywords right upfront. Just as I would do it. That's why it can rank 4th with a handful of new ratings. #5 has more ratings but commits the ugly sin of unnecessary repetition. I have a feeling the folks at MWM tried to copy GuitarTuna's name with a few changes. Unfortunately for them, those changes make it so that there's only sin and no lucky save. With minimal changes, #5 can easily climb to at least #3.

Keyword Teardown #7 - The Most Important Signal!