App Teardown - Match 3D is Getting into ASO

ASO for games is not a new trend but one that's been gaining more traction lately. Last week, Tilting Point announced it'll invest $60M into Match 3D, a nine-month-old game that's managed to rack more than $5.3M in the U.S. alone, to improve its organic growth via ASO.

In this app teardown, we're going to dive into Match 3Ds download and revenue performance, current ASO strategy, and then dip under the hood and see what's powering the game.

This is the first teardown where we use our SDK & permission intelligence data and also look at privacy labels.

Not so good: No keyword strategy, unoptimized screenshots.

Match 3D by the Numbers

Here's how Match 3D is performing in the U.S. App Store, based on our App Intelligence:

Match 3D, which launched in May of 2020, has had a very nice looking trend for both downloads and revenue. 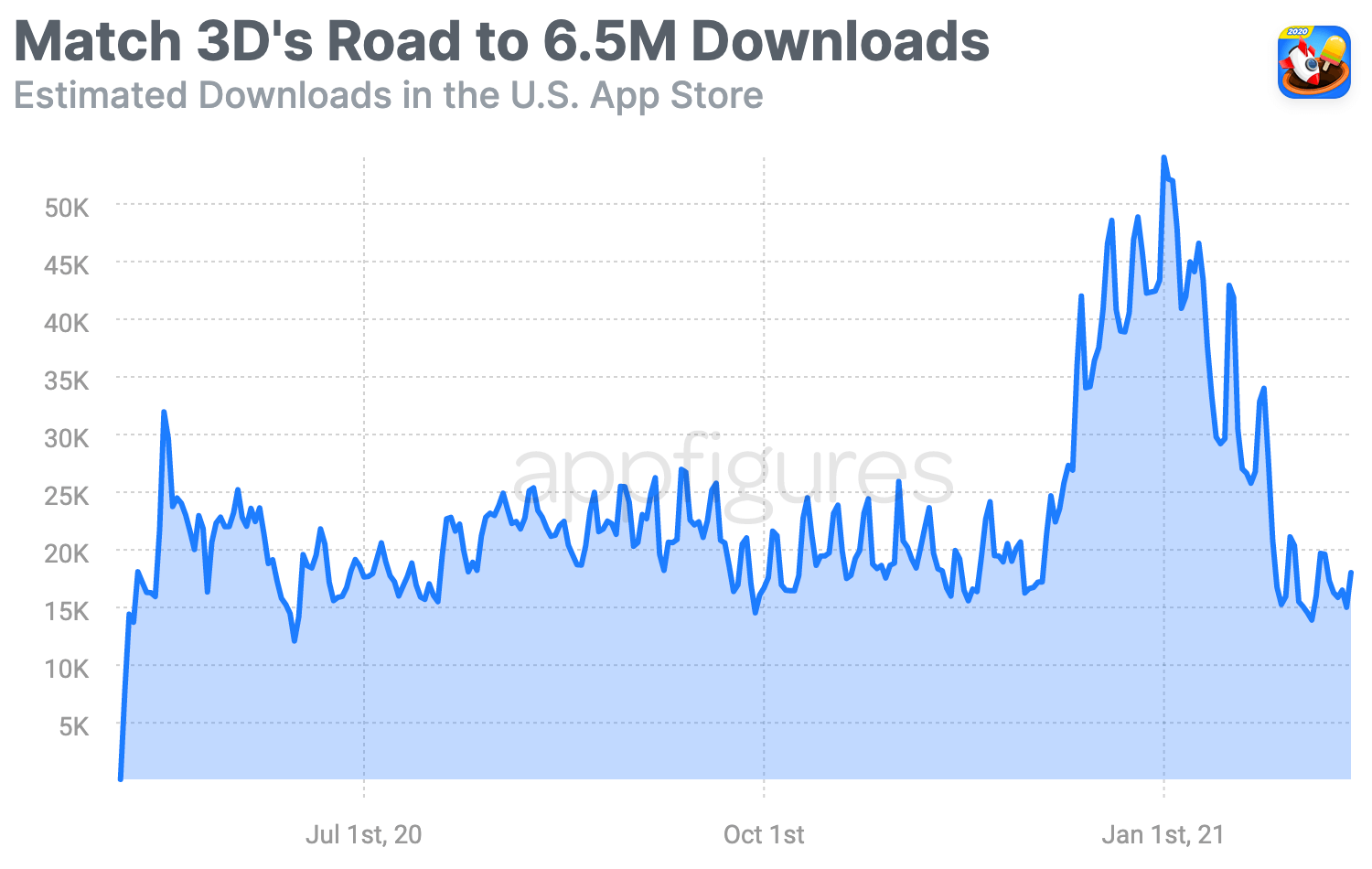 In its first nine months, Match 3D was downloaded by more than 6.3M iPhones in the U.S., based on our app intelligence. That's a pretty good start! 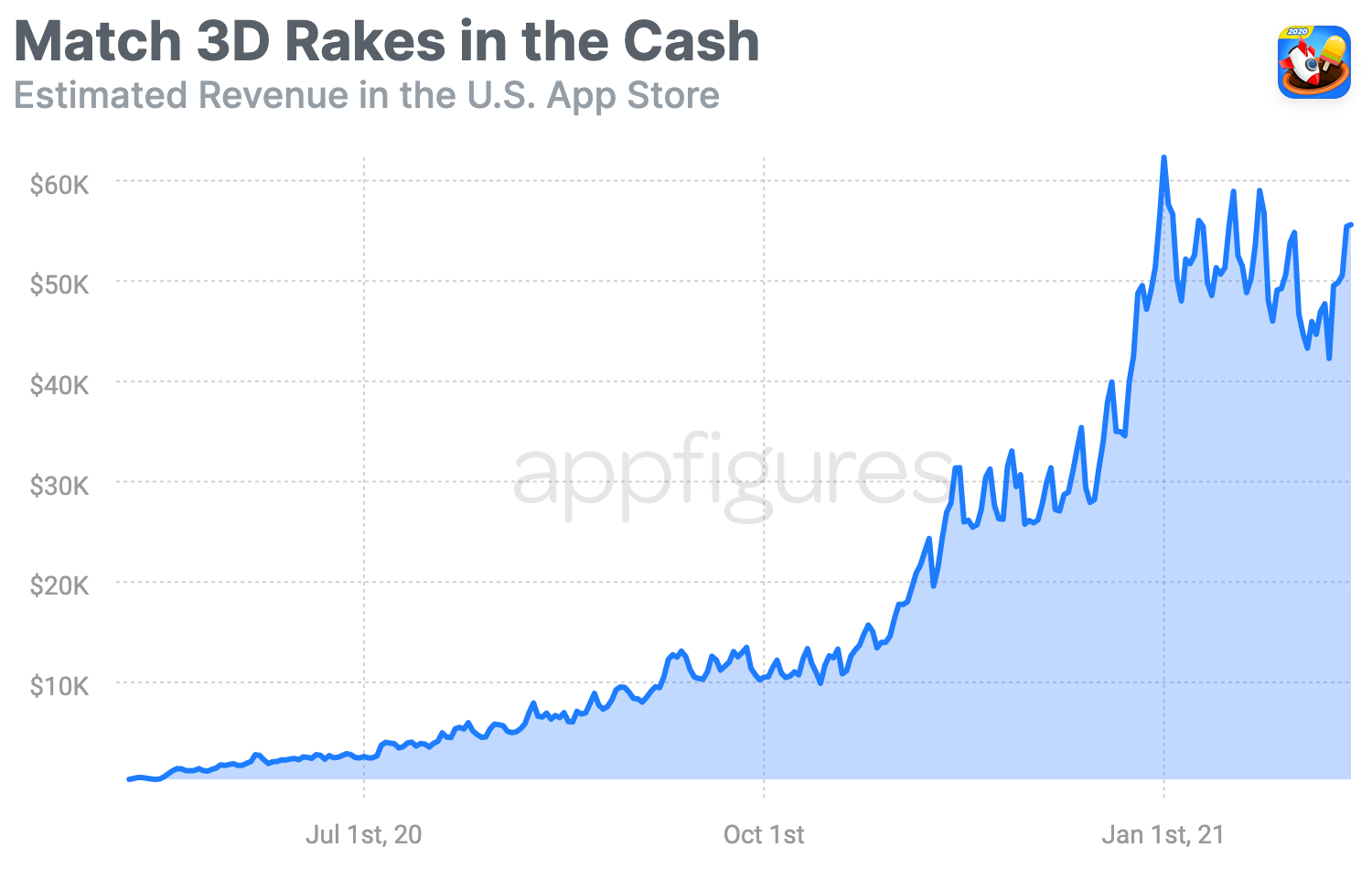 Revenue has a more interesting trend that starts around November and now averages more than 100,000 new downloads every weekend, based on our estimates.

Match 3D is advertising heavily to get those downloads, which may seem like they're "cheating," but doing paid UA right is no small task. On top of that, the revenue to downloads ratio is pretty healthy if you focus on the recent growth. That's not an easy task either, and likely why Tilting Point is interested in the game.

Match 3D vs. the Competition

Match 3D isn't a brand, and on the App Store, it's competing with similar games that bear similar, unbranded names. Here are the top 5 results that come up when you search for Match 3D in the U.S. App Store:

Match 3D is leading the pack, and by a mile, across all the numbers that matter. Most of the games' downloads come from paid ads, but all of those downloads are influencing the algorithm.

What's interesting is that the competition, which seems to be in a lower weight class, isn't really optimizing their keywords very well to try and take on Match 3D. Maybe they don't know-how, or maybe they don't want to try, but it looks like a missed opportunity to me.

Where is Match 3D Ranking?

Before we dive into Match 3D's keyword strategy, let's see where it's currently ranking by using the Discover Keywords report: 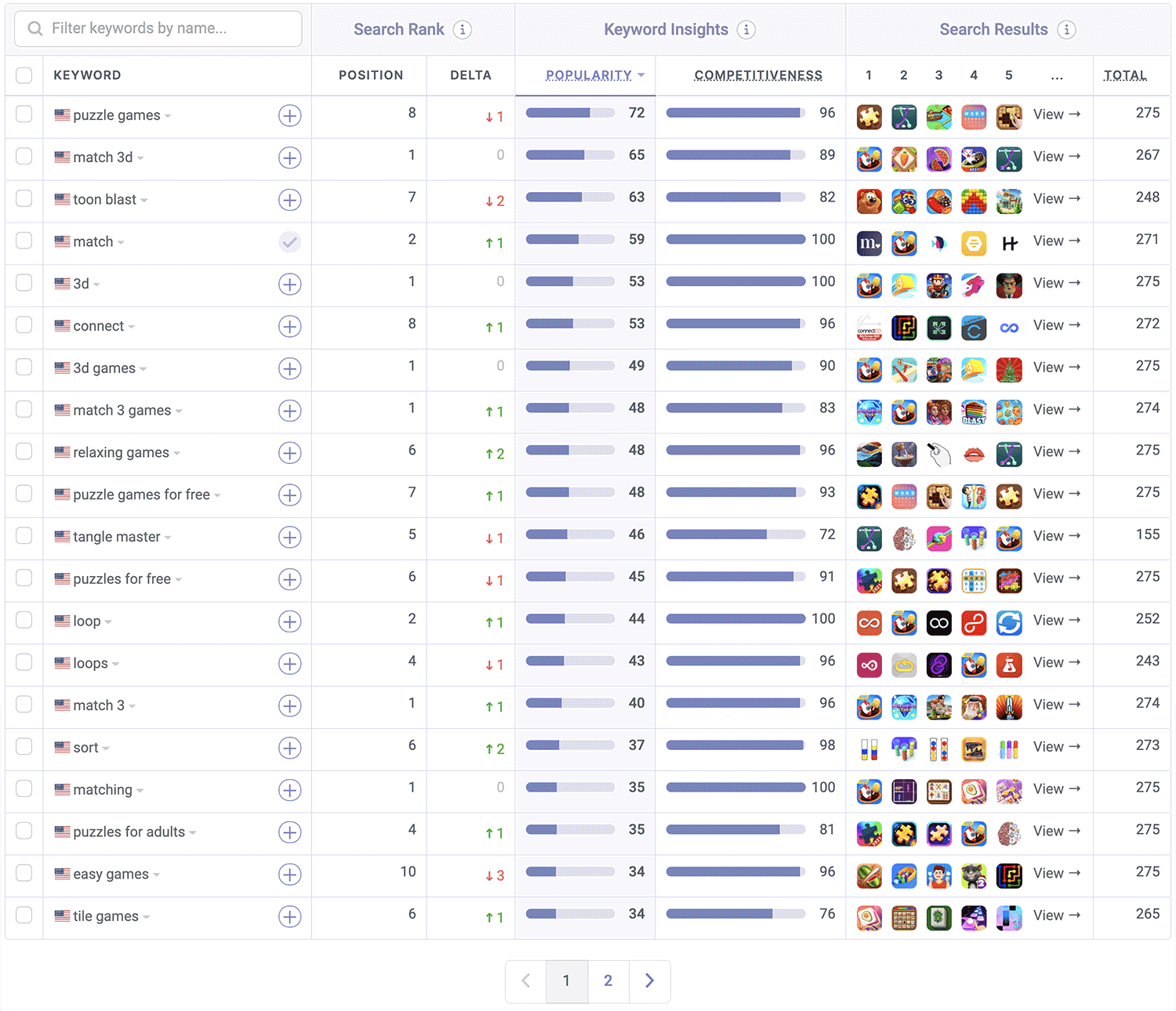 After filtering out unpopular keywords and those where the game isn't ranking very high, we're left with 29 keywords, and that's not a small number. Remember, Apple's algorithm favors apps that get downloads, regardless of how. Match 3D has the downloads, and so the algorithm is awarding the game with high ranks for all of the keywords it can see.

The only problem is... there aren't many.

Telling the algorithm which keywords to rank your game in is done by using them in the game's name, subtitle, and keyword list. The first two send the strongest signal to the App Store's algorithm, so let's start by analyzing those:

Luckily for Match 3D, puzzle, match, and 3d are fairly popular terms and combine fairly well, but unlike the success we've seen so far, this keyword strategy is an indicator of no real strategy, which is bad for ASO.

Not taking advantage of all that paid traffic means that growth needs to continue to come from paid ads, which are expensive and take a lot of effort to optimize and manage.

Pro tip: Organic first, Paid second. Even if the organic won't yield results on its own before paid ads, you'll get rewarded for the time you put in later, as those paid downloads amplify your reach. 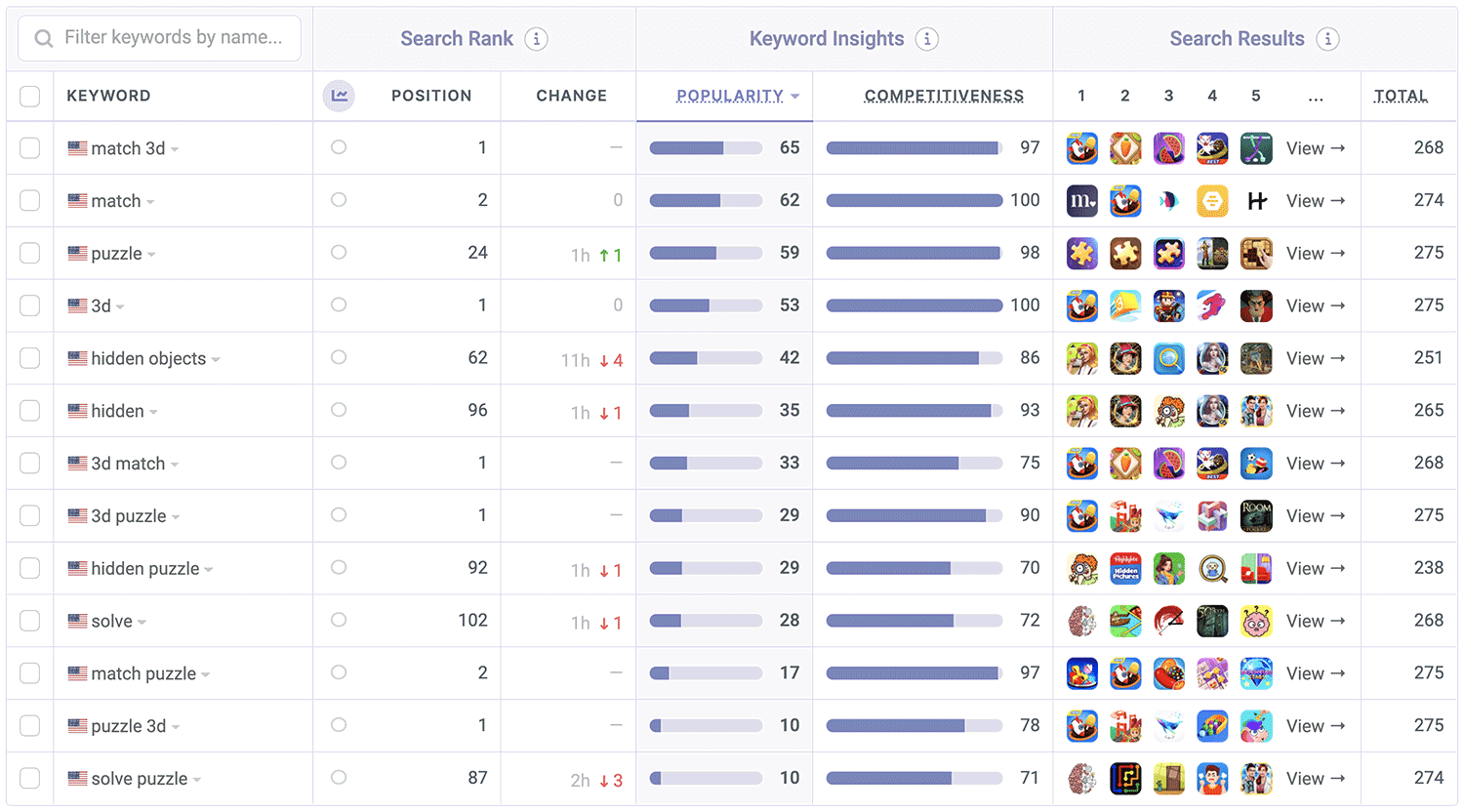 By not using the full 30 characters of the name and not offering the algorithm too much to go on, Match 3D is leaving a lot of opportunities on the table and isn't ranking too well in popular keywords like puzzle.

I had a hard time finding enough keywords to fill up the entire 100 characters Apple provides, and that can be the result of either not providing 100 characters or not optimizing the list by using spaces, pluralization, duplication, or even quotes. All of those would lead to a very short list.

From what I can see, these aren't bad, but also don't feel very focused. A game like Match 3D is a great opportunity to use the keyword list to really amplify the name and subtitle.

Close your eyes, kids. You don't want to see this... 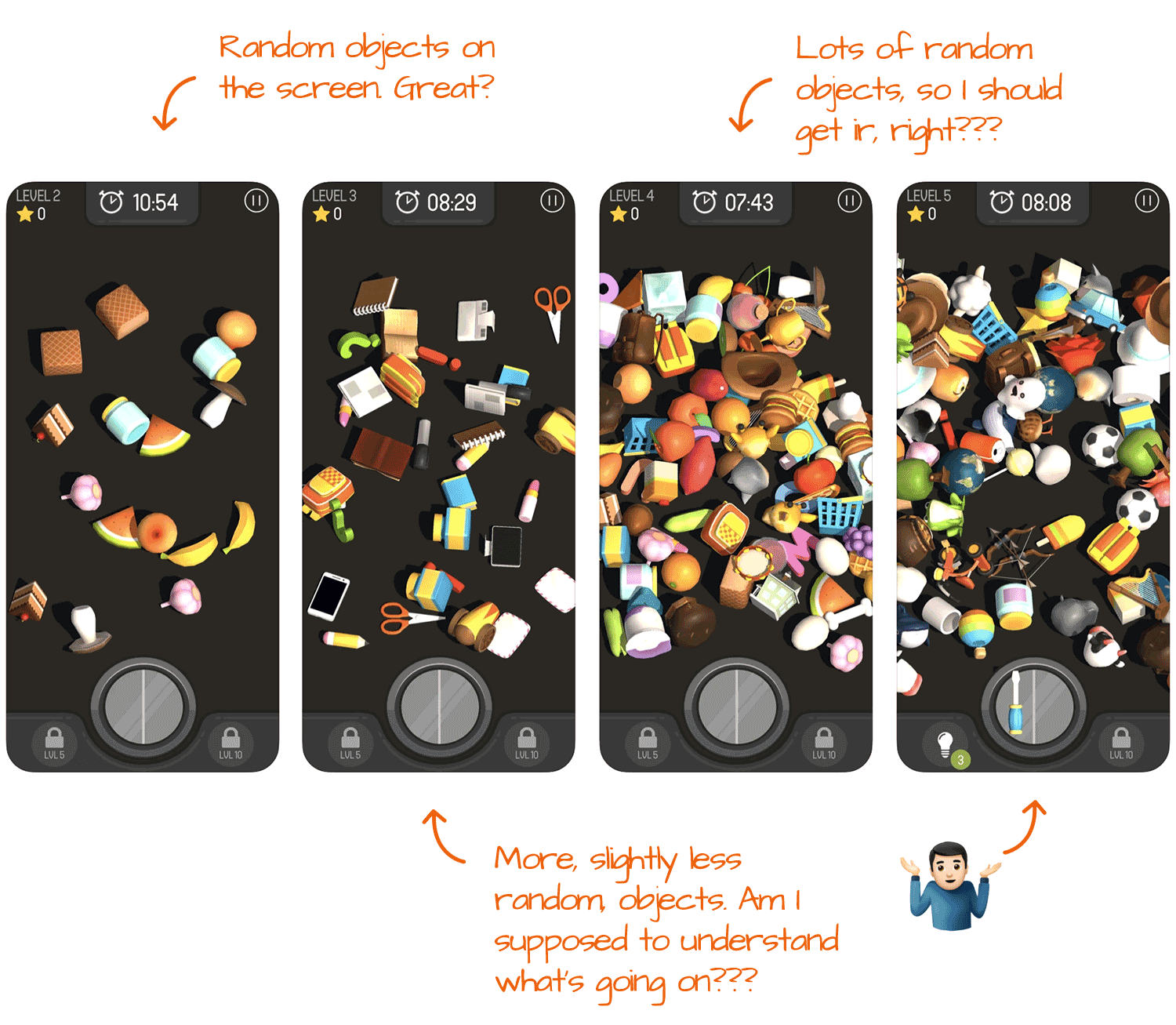 These are the screenshots of a game that made $5M in the U.S. in the last year. Goes to show how well the game converts. But really, it's also a good learning experience because it's the equivalent of a blank slate, which allows me to (re)introduce the basics:

And equally important - Apple gives you ten chances (aka. screenshots) to turn a page view into a download. Use each and every one.

Match 3D does not have an App Preview, so there's not much there to analyze. This is a perfect example, however, of a game that could use a video to engage a user that's already looking at the game in search results or right on the game's page.

Now that Apple requires developers to list the information their apps collect, looking at those and understanding how they apply has become an important part of the competitive analysis because they could deter a user from downloading.

Match 3D asks for these permission:

Why does a matching game need your location? The simple explanation - more targeted advertising and better usage analytics. The more sinister one - to sell location data. That's probably not happening based on the deeper dive we took into SDKs (below), but that's always important to keep in mind.

Match 3D's privacy labels in the App Store are pretty simple. As developers know, however, Apple asks a lot of questions and then groups them into sets. Let's break those open to see which pieces of information are really being collected:

This is pretty standard for apps and games that show ads, which confirms the earlier hypothesis. Which ad networks does Match 3D use? Let's take a closer look with our SDK Intelligence.

Developers use technologies from 3rd parties (and Apple) to speed up the development process, make money, and connect to other platforms. Here's a breakdown of the SDKs Match 3D for iOS has installed currently: 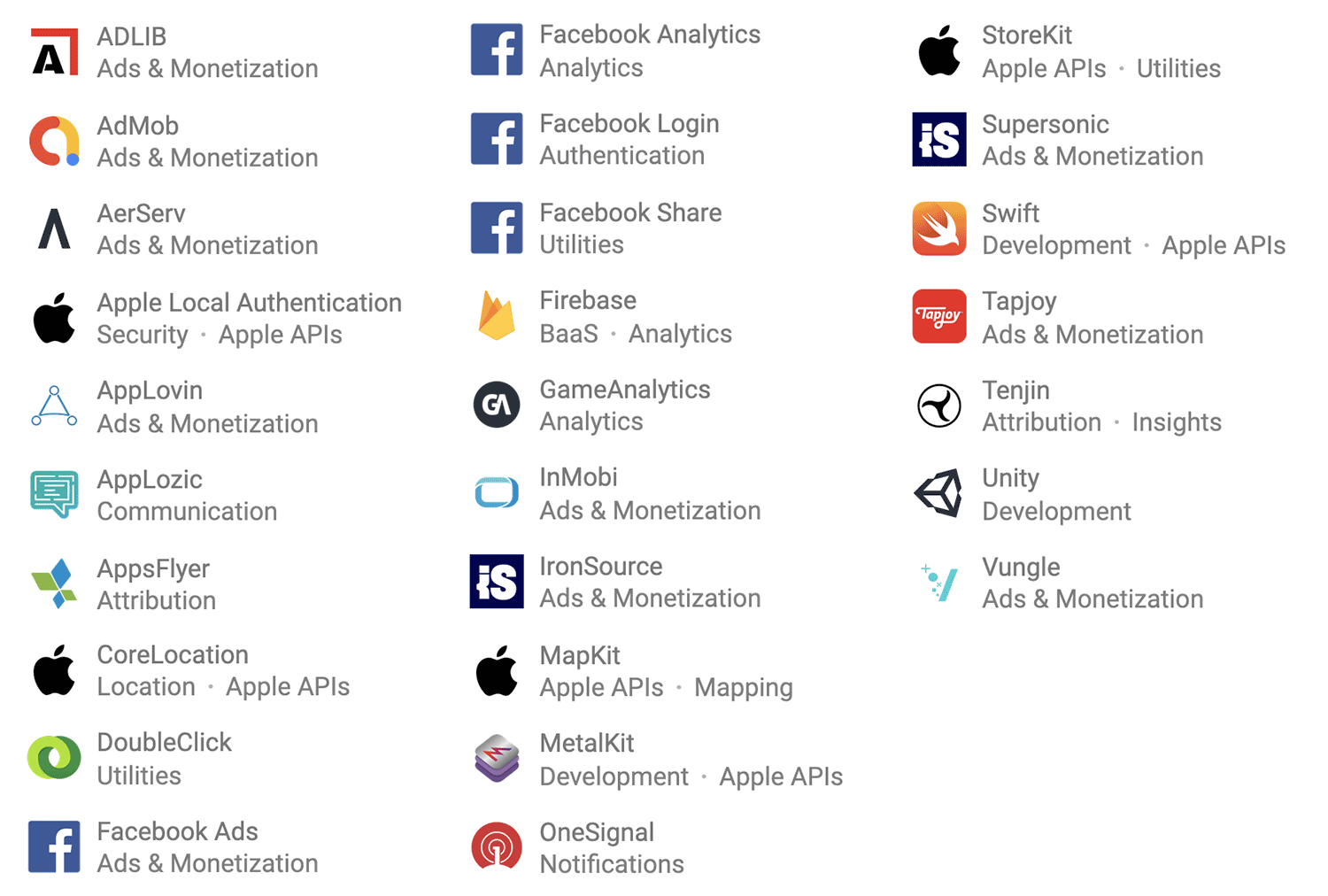 22 3rd party SDKs! That's quite a few libraries to keep track of. Here are the highlights:

The Verdict: Game On!

Match 3D is doing well by all means, but paid growth isn't as good as organic growth for both the bottom line and for the long haul. It looks like Match 3D hasn't really tried to optimize based on the lack of strategy for keywords and screenshots that look like more of an afterthought than anything else.

That's great news for Tilting Point's investment because it means there's a lot that can be done, and with such growth, I expect results to come fairly quickly.

Once Loop Games starts to optimize, I expect to see screenshots going from 0-60 and a video that shows the game in action as they work on a strategy for keywords.