ASO Teardown - Tubi Owns Movies, but Can It Take on Netflix?

The unbundling of cable has created a lot of stand-alone streaming apps, some more popular than others, but it also created a mess that we as viewers now have to maintain a bunch of different subscriptions separately, which isn't convenient or ideal.

Then there are a few apps that seem like all the other streamers, but while they have the content, they are completely free, much like over-the-air TV is. We looked at one of those in season two, and today we're looking at another: Tubi.

Overall, Tubi earns an A-. There are some obvious issues, but also some results.

Tubi by the Numbers

Here's how Tubi is performing in the U.S. App Store, based on our Competitor Intelligence: 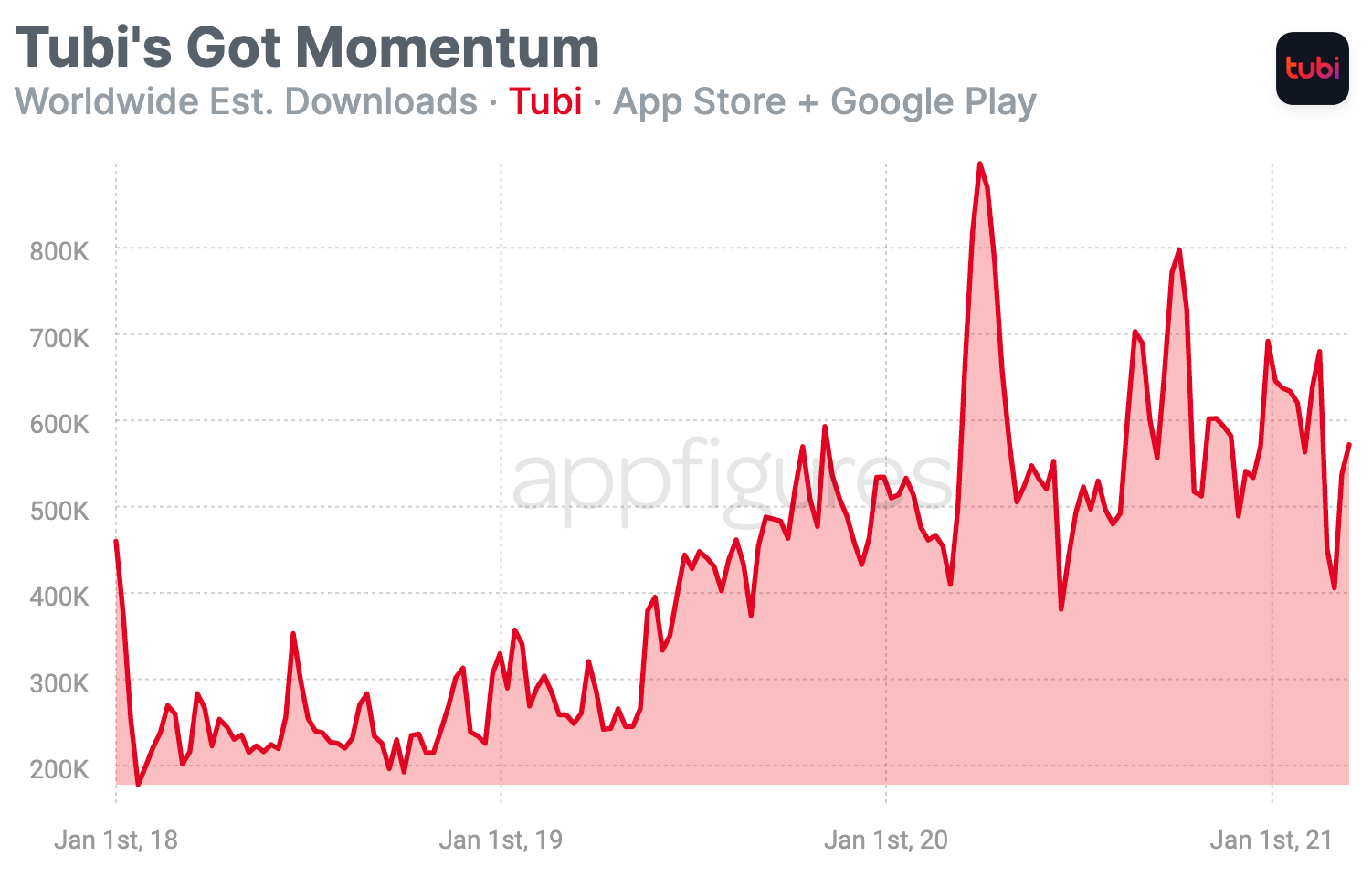 Looking at Tubi's downloads over the last few years, we can see something's working. See that upward shift in the middle of the chart? That isn't the impact of COVID. We've seen COVID's impact on many streaming services, but Tubi's growth precedes that.

COVID didn't hurt at all and helped to continue the upward trend. But competition is getting stiffer. A slew of traditional cable channels have rebranded their legacy apps and behave a lot more like mobile-first companies now.

Tubi has been growing 50% year-over-year for the last few years, and as long as it continues to invest in optimizing for organic downloads, I don't expect that to change.

The Competitive Landscape is Getting Busy

The streaming race seems to grow a new competitor every month, but in most cases, those competitors all cost something per month. While Tubi is technically competing with them, its free price tag puts it into a different category. 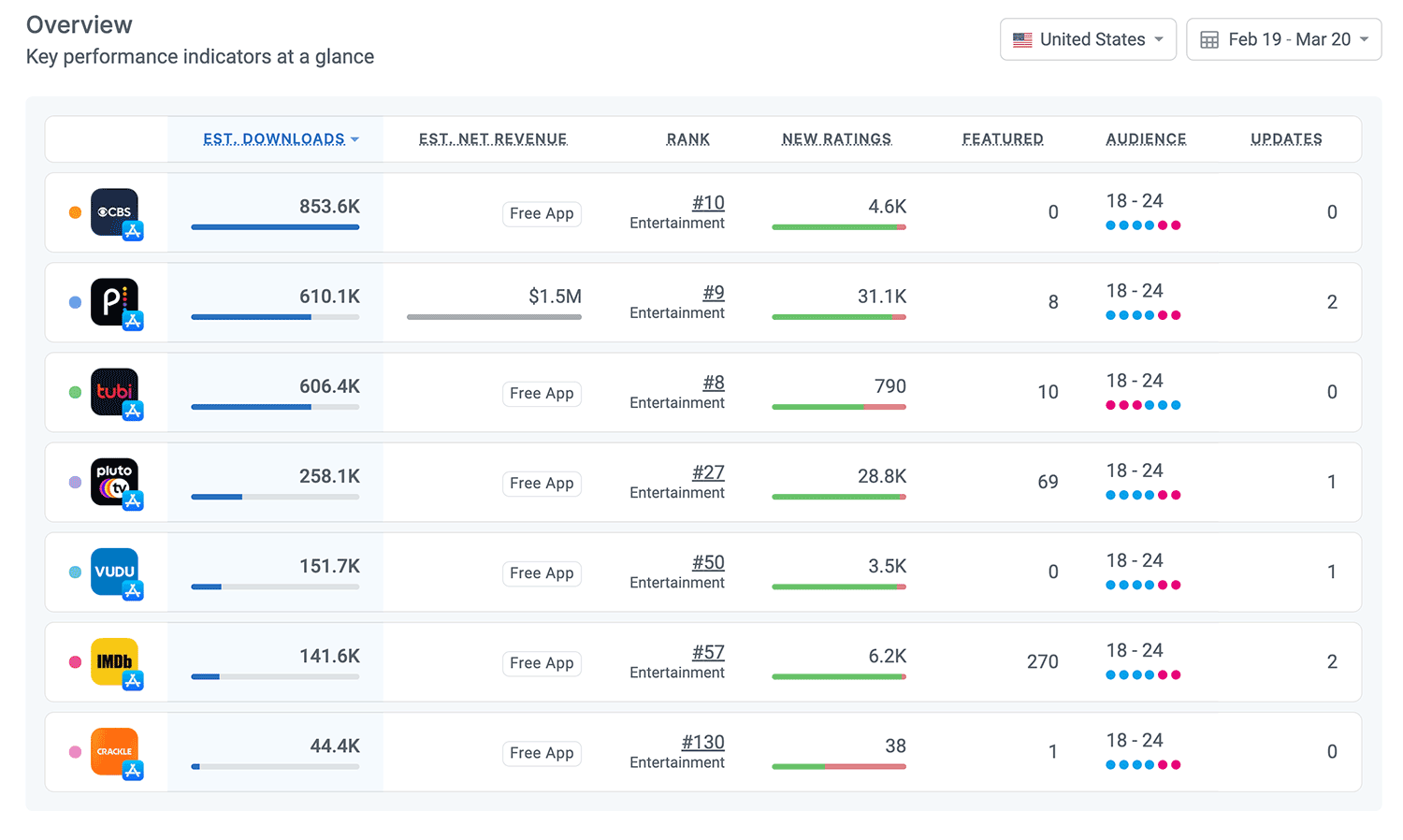 In its own group, Tubi is doing very well. It's keeping up with NBC's Peacock (which has The Office) and has triple the downloads of its nearest competitor. CBS seems to be in the lead, but that's because it launched in early March and had a big spike in its first week.

It's getting crowded out there, but Tubi has momentum, and that's what's most important here. It's momentum Tubi has to fight to keep.

How is Tubi Found?

Let's start by zooming out to see which keywords contribute the most to Tubi's organic downloads: 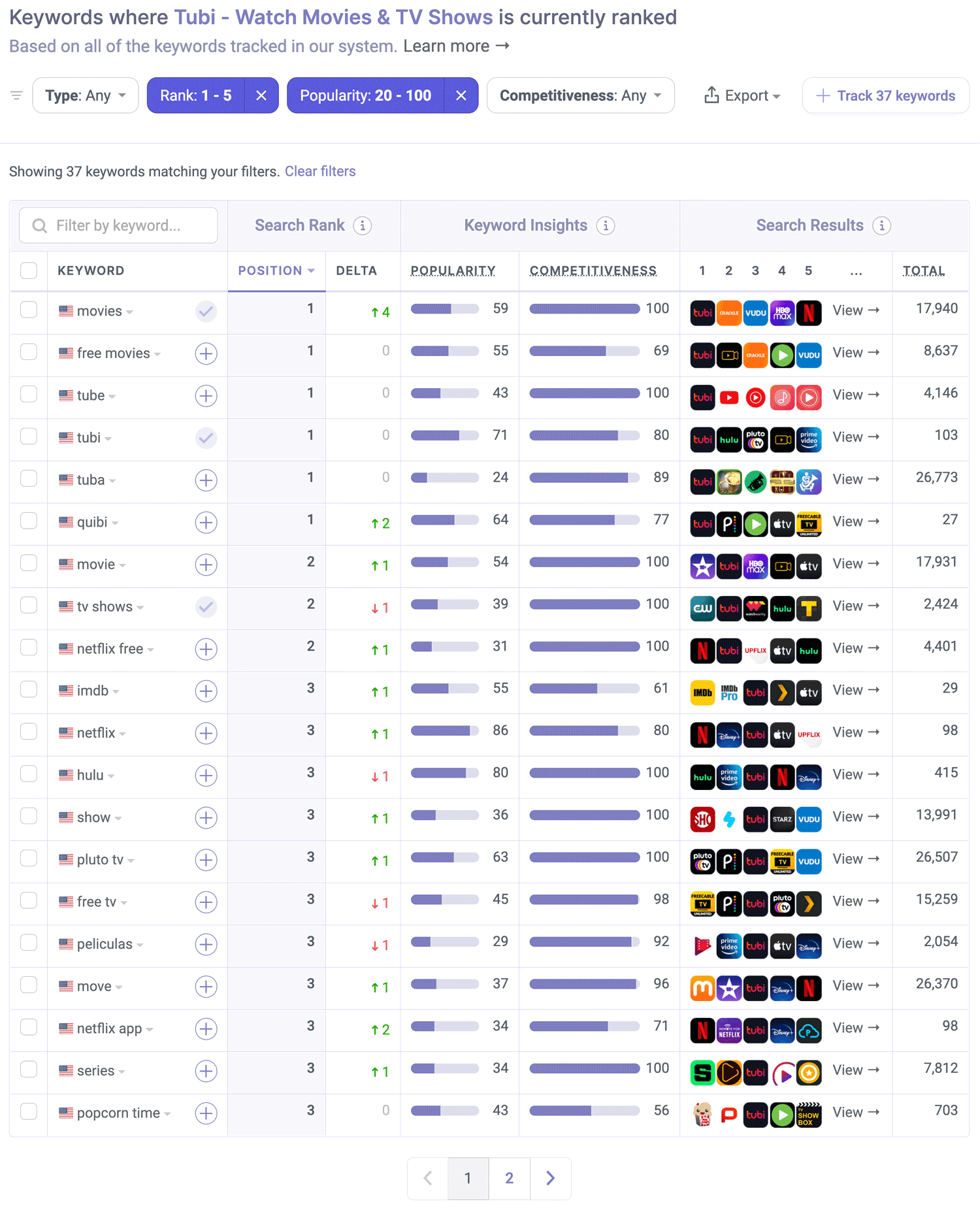 I gave Tubi an A- even though they duplicate keywords, which is an obvious no-no. Looking over this list above, I hope you can see why.

Tubi holds the #1 position for the keyword movies, one of the more popular and competitive keywords all streaming services would love to own. Not only that, it's also the #1 result for "free movies", the #2 result for "tv shows", and the #3 results for "free tv".

Let's dig in by looking at the keywords Tubi is targeting in its name and subtitle:

Strictly based on these, here are the popular keywords Apple sees:

That keyword list where Tubi is ranked right now is just great. The current name and subtitle, not as much. There's a lot of wasted characters there which leads to a pretty small number of target keywords.

These issues are costing Tubi a good number of characters they can use to expand their keyword reach. Luckily that's a pretty easy fix.

Now, let's reverse-engineer the keyword list. The list isn't public, but we can attempt to uncover it by looking at all other keywords the app is ranked in.

If you've been following these teardowns, you'll immediately see Tubi's strategy. The keyword list is targeting intent, specifically, the type of content people are looking for. So in addition to aiming for more generic terms vague, like "TV shows", Tubi is also targeting more specific ones like "reality tv", "kids shows", and a bunch of others.

The beautiful thing here is that most of those keywords combine well with other keywords in the name, subtitle, and the keyword list itself. That's a great way to know the list is good.

Not a single app this season had an App Preview video, so Tubi fits right in. I end up debating the need for a video every time I come across an app with no video, and almost always, the answer is that it can't hurt. Please prove me wrong.

Let's look at the screenshots: 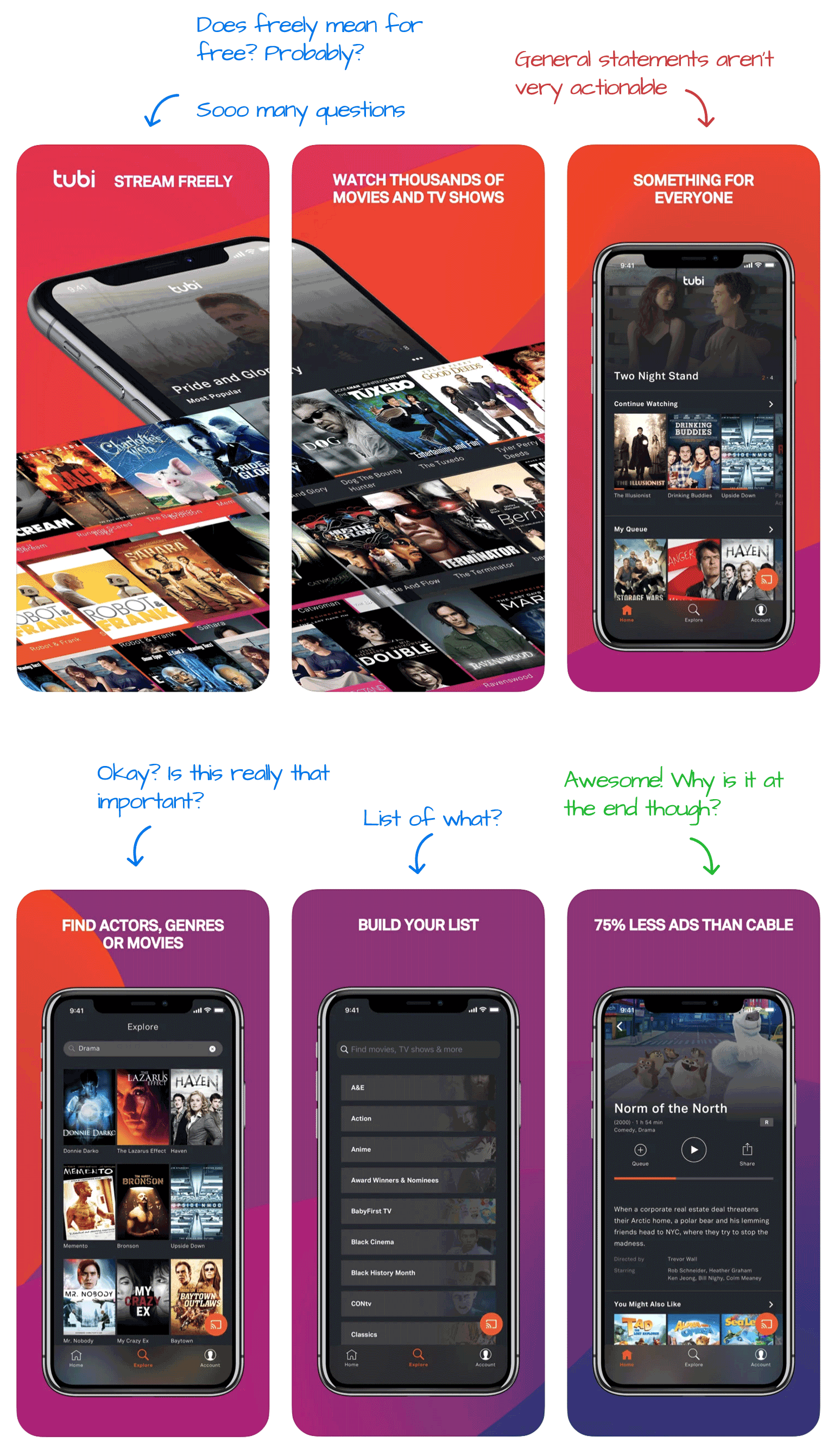 If you read Tubi's description, it just screams "free movies," which is great because that's a great selling point. Its screenshots, however, don't.

Now... Apple's policies can be directly blamed for that, but I think there are many ways to say free without upsetting Apple, and that's what the people at Tubi should be focusing on and experimenting with.

In this new(ish) section, we look at the privacy labels apps declare on the App Store. Tubi is definitely collecting, but considering it's a free app, it's not too bad.

Looks like quite a bit, and given it's a free that makes money by serving ads, not at all a surprise. There's a certain level of give-and-take on the App Store, where what you take is free movies, and what you give is mostly unknown.

These labels add a bit more insight into that unknown but overall still leave a lot to be desired. For example, what's "Other Data", and what sort of "Search history" is Tubi collecting?

I don't see these as "problems". Ultimately, there's no such thing as free lunch. But I've said this before and will say it again, this new visibility into the unknown will eventually become a factor in the should I download this app decision process.

Here are all the SDKs and APIs we see powering Tubi:

Tubi is using what, by now, you can tell is a pretty standard stack.

Firebase is the most dominant SDK for analytics, and a deeper look at Tubi's SDK graveyard, the SDKs that have been uninstalled over the years, shows they've tried a bunch of different analytics solutions, both from big names like Facebook and also from private companies like Countly.

In its category, Tubi is already doing very well. More competitors will come, there's no doubt, but if Tubi can maintain its momentum, it can continue to give those new competitors a run for its money since it's easier to find.

But Tubi's real competition isn't apps like it. Tubi is fighting two battles:

Tubi, and free apps like it, have the tools necessary to win the first battle and the content to win the second. If they try.