Walmart has transformed a lot this year. The new normal is undoubtedly to blame, but it's good to see a company of Walmart's scale take on digital challenges (and trying to get into social media) like that.

You may think Walmart is too big of a brand to worry about App Store Optimization, but ignoring discovery in the App Store, where Walmart earns many many downloads, would be irresponsible for a company that's not only taking on Amazon but also a host of smaller rivals.

For its effort, we award Walmart a B+

Walmart by the Numbers

The "new normal" has given the Shopping category a serious jolt, and Walmart got a lot of that. Here's how it's performing in the U.S. App Store, based on our Competitor Intelligence:

Shopping is a pretty wide category. In its physical stores, Walmart sells pretty much everything, from clothes to kitchen appliances. A few other competitors that come to mind when thinking about an "everything" store are Amazon, very big, and Target, somewhat smaller.

But based on its keyword strategy, Walmart is also going after food delivery, which pins it against lockdown success-story Instacart.

But Walmart isn't doing all that bad. Walmart's physical presence gives it something few retails have, so its ability to compete online is even more critical, especially now.

When pinned up against its obvious threats, a few things become very obvious:

There are opportunities here, but only if Walmart sees them that way.

One App to Rule Them All!

Pre-lockdown, Walmart had two apps. Its flagship shopping app and a separate app for grocery delivery. In April, those two were merged, likely so Walmart can focus all of its development and marketing effort on a single app. That's some pretty good thinking, and for a hot minute, they did get more downloads than Amazon. 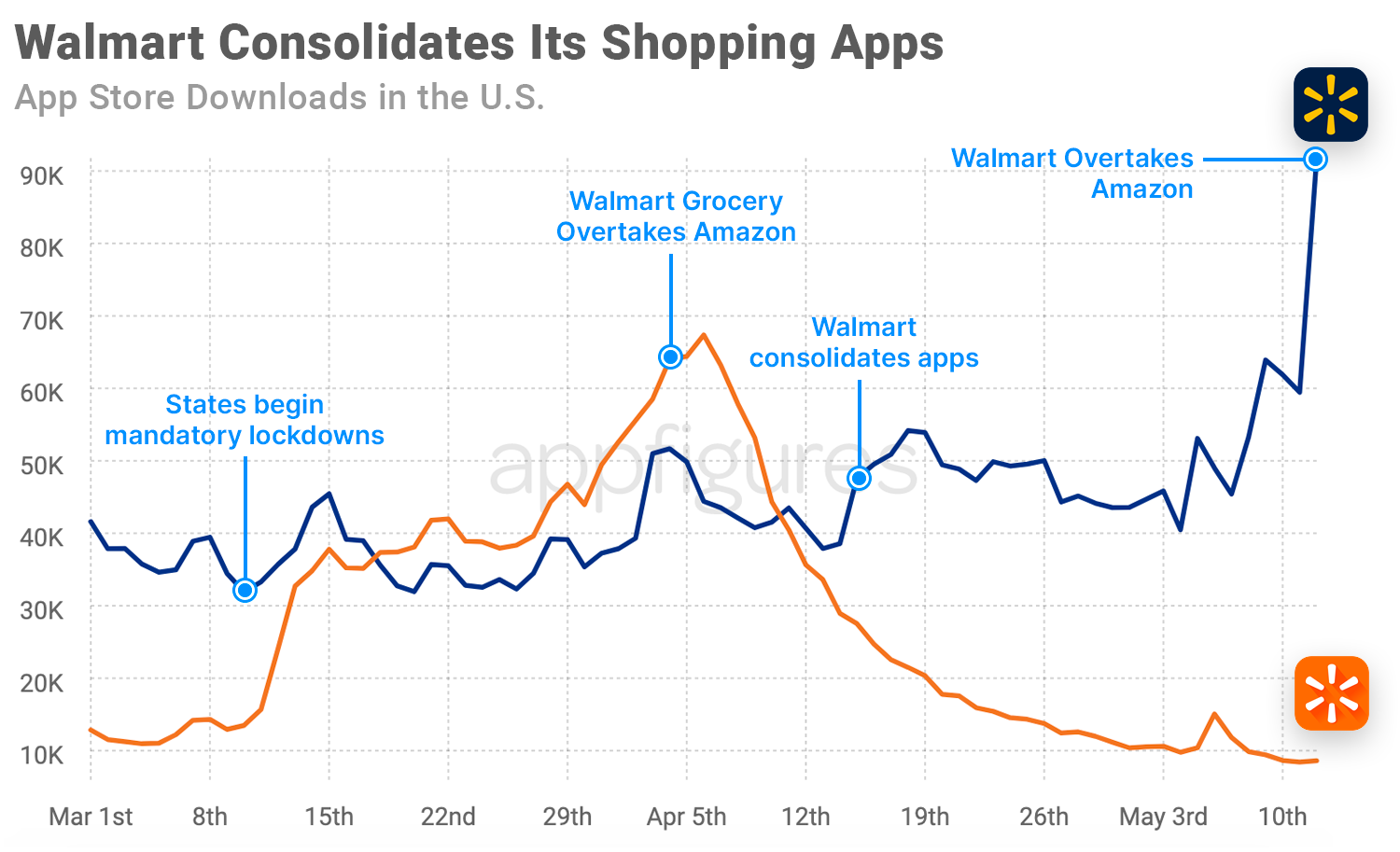 Now that you have some context, let's get to ASO:

Let's kick off the analysis with the keywords Walmart's using in its name and subtitle. Those send the strongest signals to the App Store's algorithm.

Let's take a look at where Walmart is ranked for these keywords: 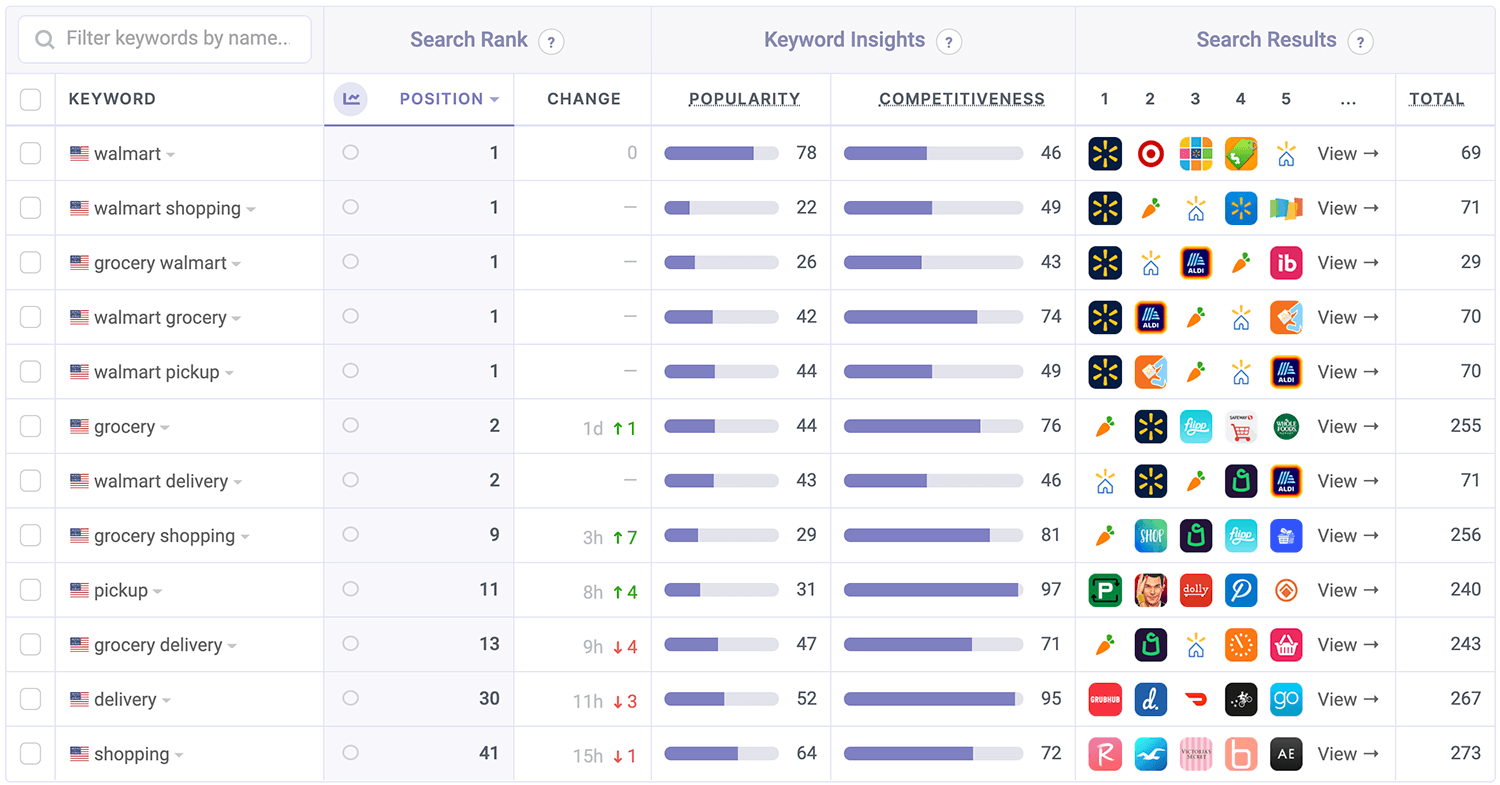 Walmart's keywords do very well with its biggest asset, its name, in search results.

That's a great outcome for an app with such a big name and means Amazon will have to continue spending a pretty penny (or six) on Apple Search Ads. If that's Walmart's goal, I'd say job well done. However... I think Walmart can go beyond branding on the App Store and target actual needs people have.

They tried, with "grocery" and "delivery", but those aren't performing all that well.

Now, let's reverse-engineer Walmart's keyword list. The list isn't public, but we can attempt to uncover it by looking at all other keywords the app is ranked in. We believe it looks something like the following:

Walmart seems to commit the cardinal sin—targeting competitors. How many times do I have to explain why this is a bad idea??? When you target competitors, you almost always waste precious characters. In this case, roughly 30% of keywords are wasted on competitors, which will 99.99999% of the time not lead to a download.

Instead, and this is something that Walmart does a tiny bit of, they should be focusing on intent. What do people want/need when they take their iPhone out of their pocket to search for an app like Walmart's?

They're hungry (grocery delivery), or thirty (alcohol delivery), are cold because winter is here (heater delivery), etc. That last one needs some thought, but you get the idea. Think intent, need, want. That's what will get you conversions (aka. downloads).

Where Else is Walmart Ranked?

This combo of name, subtitle, and keyword list gives Walmart a bit more than just the name and subtitle alone. Here are some of the highlights: 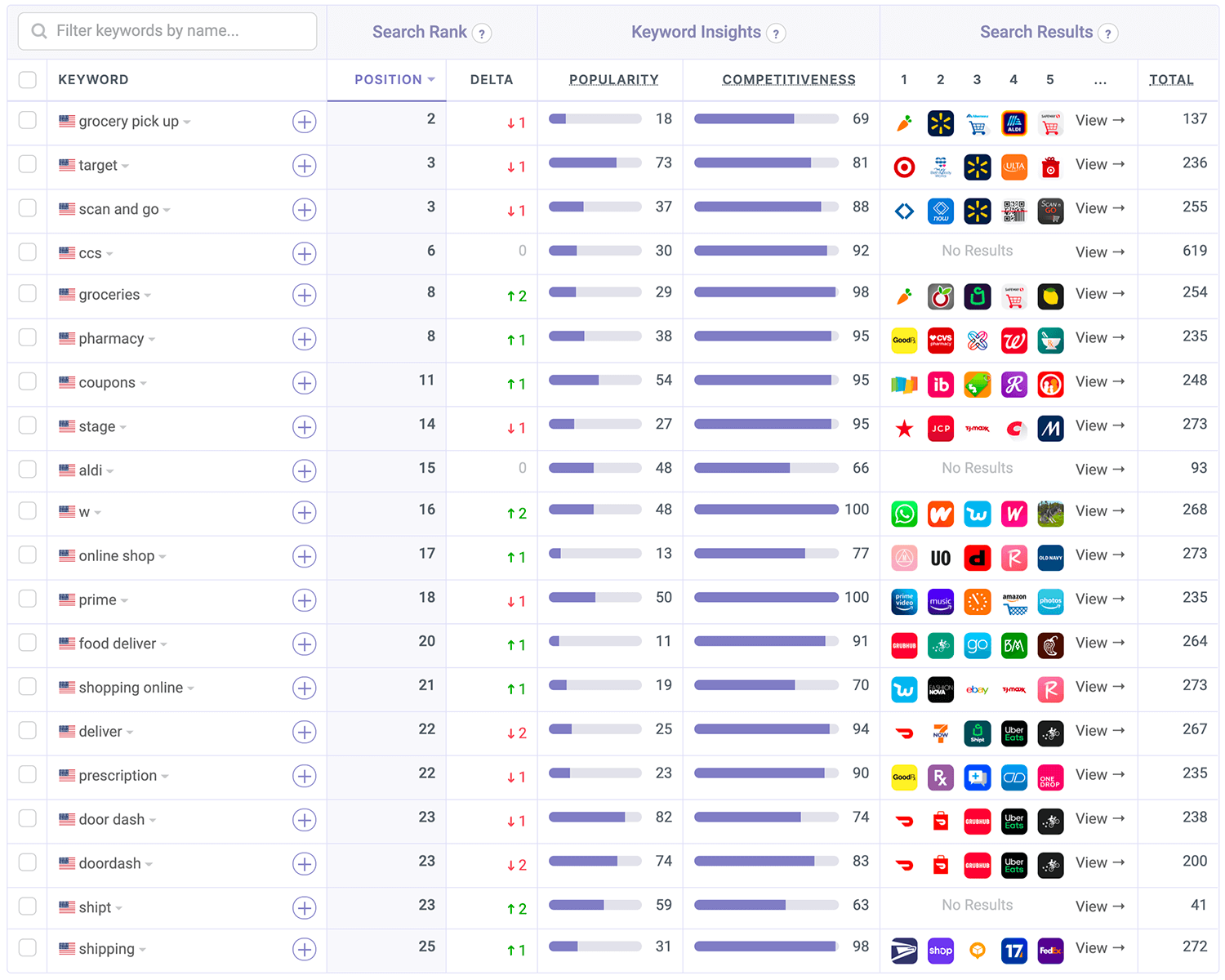 Because the keyword list is a bit all over the place, Walmart doesn't rank too high for many non-branded keywords, but it is ranking for quite a few popular ones, which is a good opportunity. With a more focused and more intent-based keyword list and a few minor changes to the name and subtitle, Walmart can jump into the top 10 or even top 5 for many of those competitive and popular keywords.

That's what happens when you have a lot of downloads.

Oh boy! Walmart takes advantage of all ten screenshots Apple allows, but not so "awesomely." On the bright side, there is a lot of almost great here to learn from.

Let's start with the good, because there's a good amount of it, too. First, taking advantage of all screenshot real estate. Then we have colors, contrast, and actionable captions. These check most of the boxes. But...

A trap many large ( or wannabe large) companies fall into is using vague language that sounds good but doesn't invite conversion. These screenshots are full of that, and that's not helping conversion. Maybe Walmart is too big to care about that, but I suggest not doing this with your app.

Walmart took the time to create an App Preview Video. This is what earned it the +.

Walmart's video, which focuses on app usage with the occasional explainer card, does exactly what an App Preview should do. It shows the app in action while guiding the user through what they're seeing. It's refreshing to see a big brand take the time to do it, and I bet you it's helping.

Summary: Walmart Can Do More

Walmart is a great example of a company that's trying. It's not all right, but it's close. Iterations and experimentation lead to the best strategy, and I'm looking forward to seeing where Walmart takes this.

There are a few obvious issues that are fairly easy to resolve, but overall this is a great app to learn from.