iOS 14.5 is out, and with it a new privacy feature from Apple called App Tracking Transparency (ATT), which adds a layer of security to every iPhone's unique device identifier, limiting access to it and giving users the decision of whether to share it or not.

Why does that matter? Unique device identifiers allow app developers to connect data points from different apps or an app and a website together to get a better understanding of their users.

So far, in the few weeks ATT has been enforced, many apps have started prompting users to opt into sharing their unique ID. Names, big and small, have enabled asking with very little preparation, which makes the experience for their users, especially those who aren't aware of what a unique device identifier even is (aka. the vast majority), very confusing.

In this guide we'll look at how to craft an experience that explains what's going on in a way that would make it easier for the user to opt into tracking.

Important: Tracking can be used in legitimate and also illegitimate ways. This guide isn't meant to aid those who track for any illegitimate purpose. Instead, it's meant to give those with legitimate use-cases tips on how to express those to their users to earn their trust.

What You Write Matters More Than You Think

Asking a user to opt into (almost) anything is a challenge, and one that's been tainted by big company abuse is even more of a challenge. But that's not where it ends. You can trigger the prompt only once. After that, the user will need to go into their settings to enable tracking for your app after having disallowed it. Not something most will want to do unless they absolutely have to.

And if that wasn't hard enough, it's only getting worse. Apple, by default, has turned off asking for most users, so many won't even see your prompt. Instead, you simply won't be able to track them.

All of these mean that every chance you have to trigger the prompt is worth a lot. In other words, you don't want to waste your shot at a user opting in with poor copy.

As I mentioned before, tracking can be used for good and for bad, but for the most part, many in the media have associated it with the latter. Your first challenge is to fight the common notion that you are a bad actor and explain what you are doing in a way that'd be easy to understand.

The key point here is, getting a user to read what you write and not simply ignoring it or dismissing it, which is far easier.

How to Craft the Perfect Pre Prompt

While the prompt is where the decision really happens, as with all native prompts, it's limited in customizability and space. You have a sentence, and there's not a lot you can do with it that would look great.

However, Apple understands that tracking isn't always evil and allows showing a screen before the prompt, which you have complete control over and can include anything you'd like (with only a few restrictions).

That's the pre-prompt, and that's what you really need to focus on.

Here are six things to keep in mind as you're designing your pre-prompt:

Instead, it's up to you to explain why you're interrupting their use of the app, what you're asking for, and why.

Sounds pretty simple, but some developers start in the middle, expecting the user would know why they're being asked to do this. When you start off confusing, a user is much more likely to look for the skip button than they are to try and figure out what's happening.

I haven't found a great example to share, unfortunately, but this one from the NY Post isn't that bad: 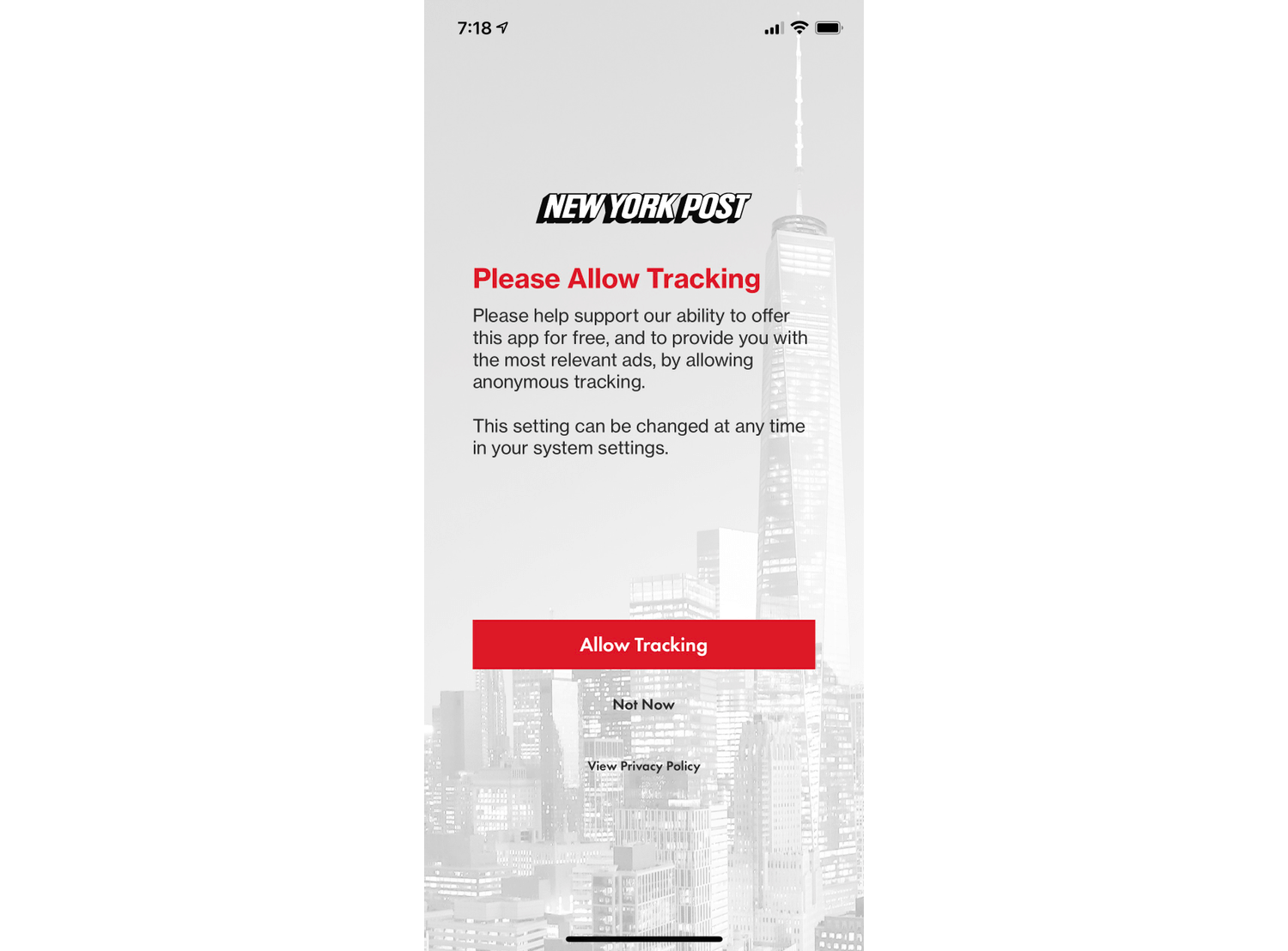 Note: If you want to confuse the user thinking that'd get them to accept, just remember that in case of confusion, most users will default to not opt-in, knowing they can do that later if absolutely necessary.

Far too many apps say tracking helps them offer "personalized ads". If you put yourself in a user's shoes, does that really seem like a benefit? No.

TodayTix describes what's going on and highlights what the user wants to hear, which is what's in it for them, in a pleasant-looking screen. The result is pretty nice: 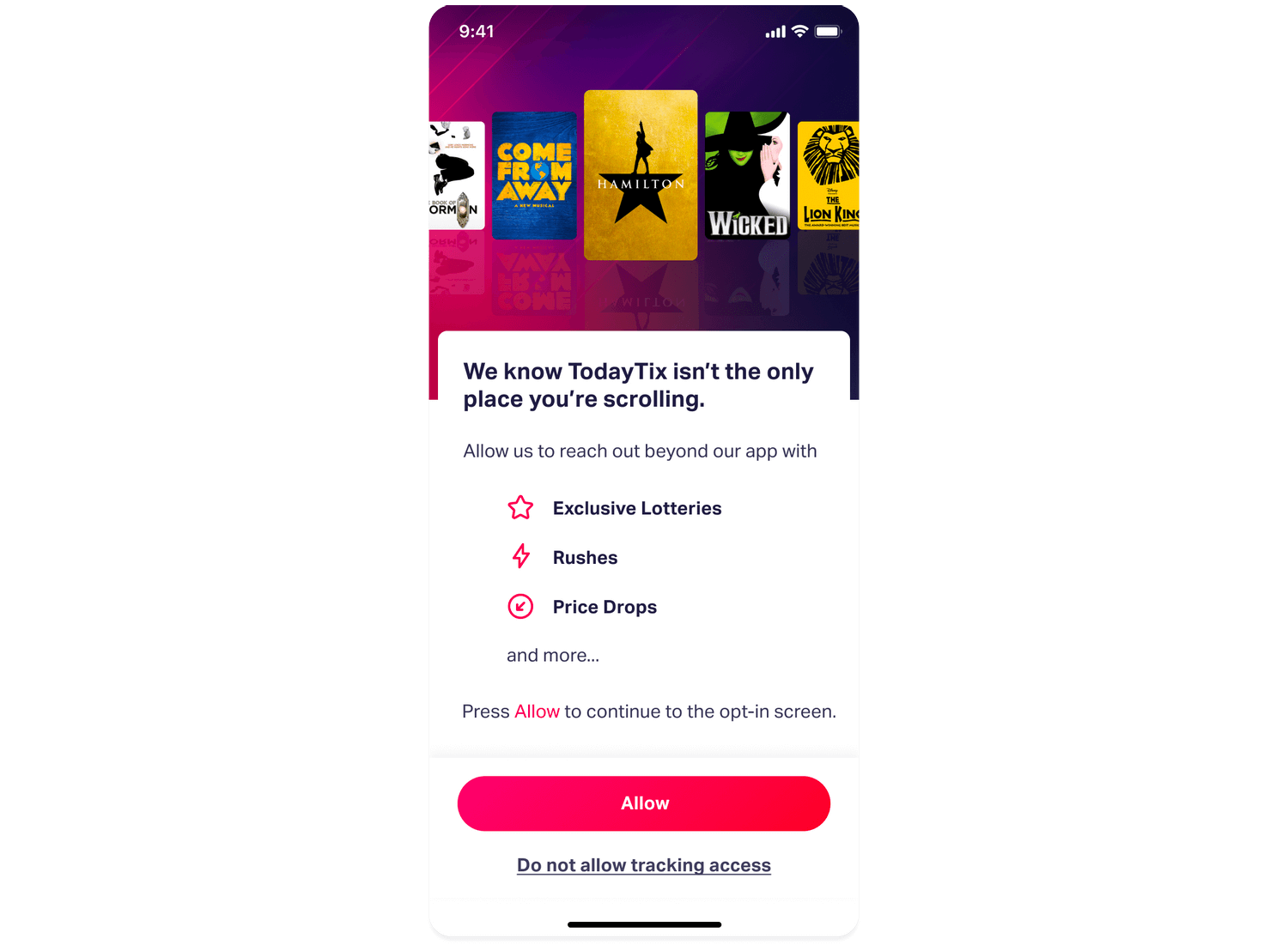 FYI - TodayTix commits a sin by having multiple actions and also using "Allow" for the button's label, so ignore that part of the screen. I'll explain what's wrong with that below.

Examine your copy and make sure it's easier to smile when reading it than to not. Domino's takes a casual tone with some humor to break the ice. If you ask me, it's not half bad. 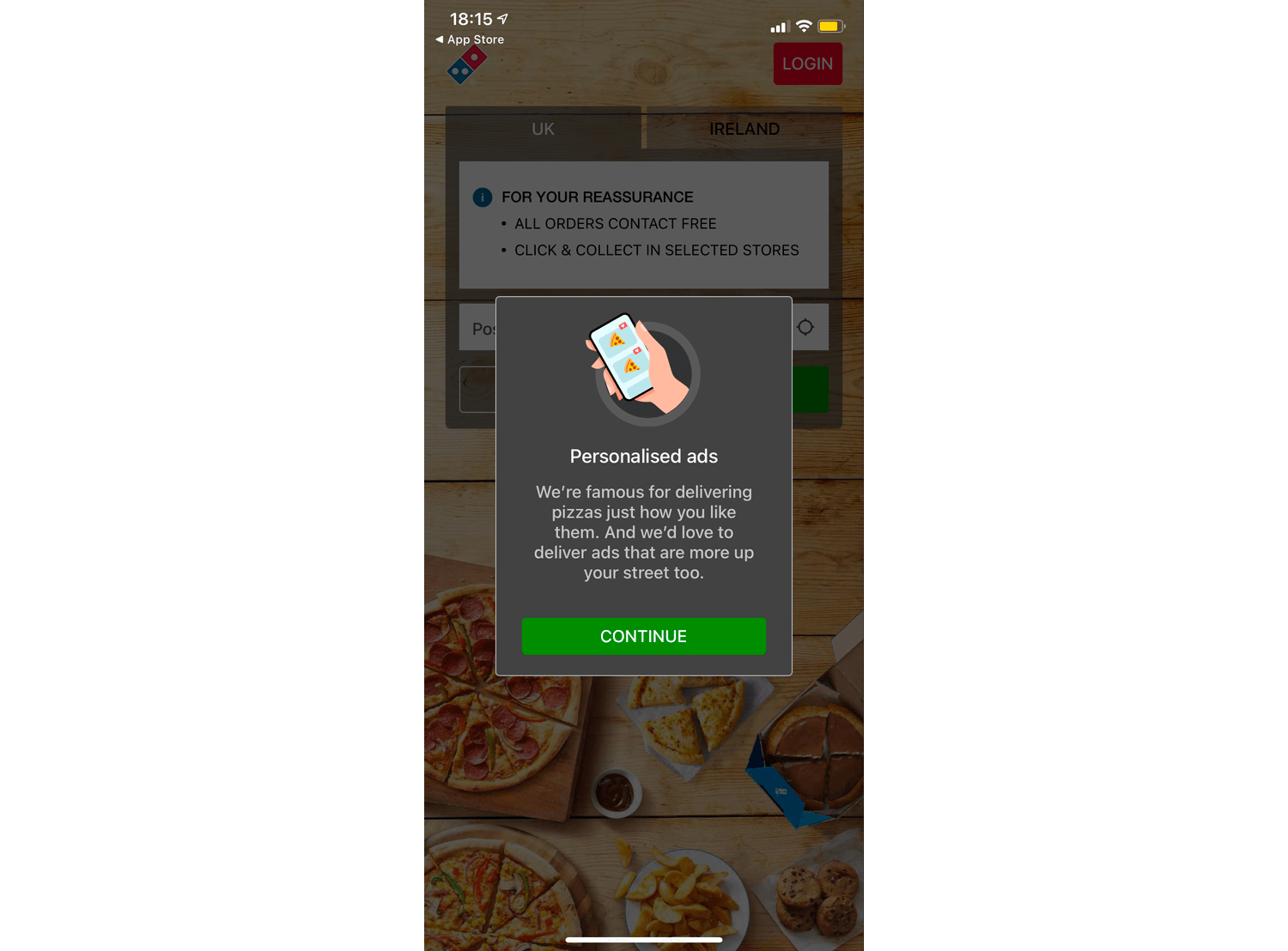 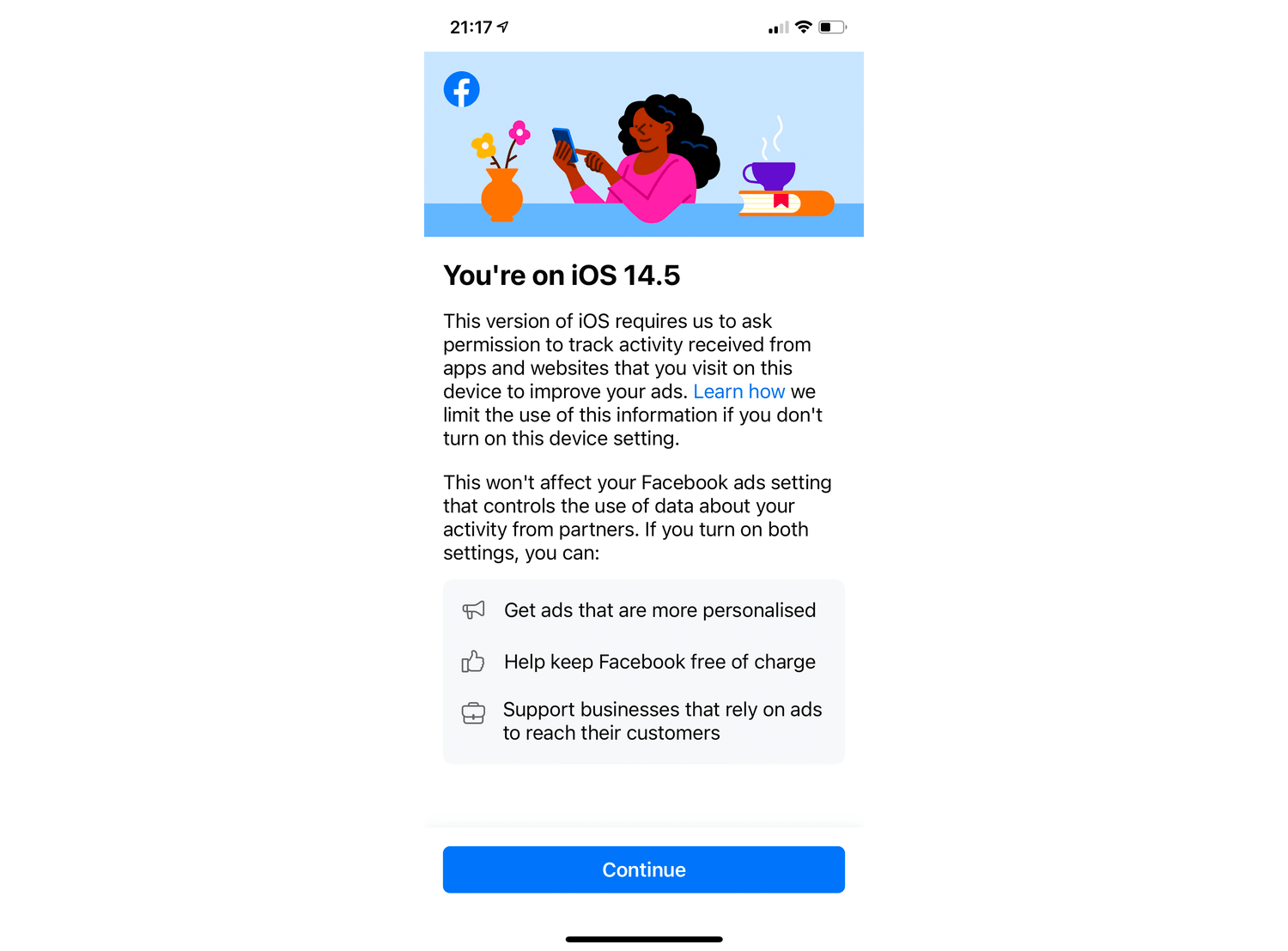 Please tell me you're laughing at the thought just as I am. So, don't give your users any reason to laugh at this point. 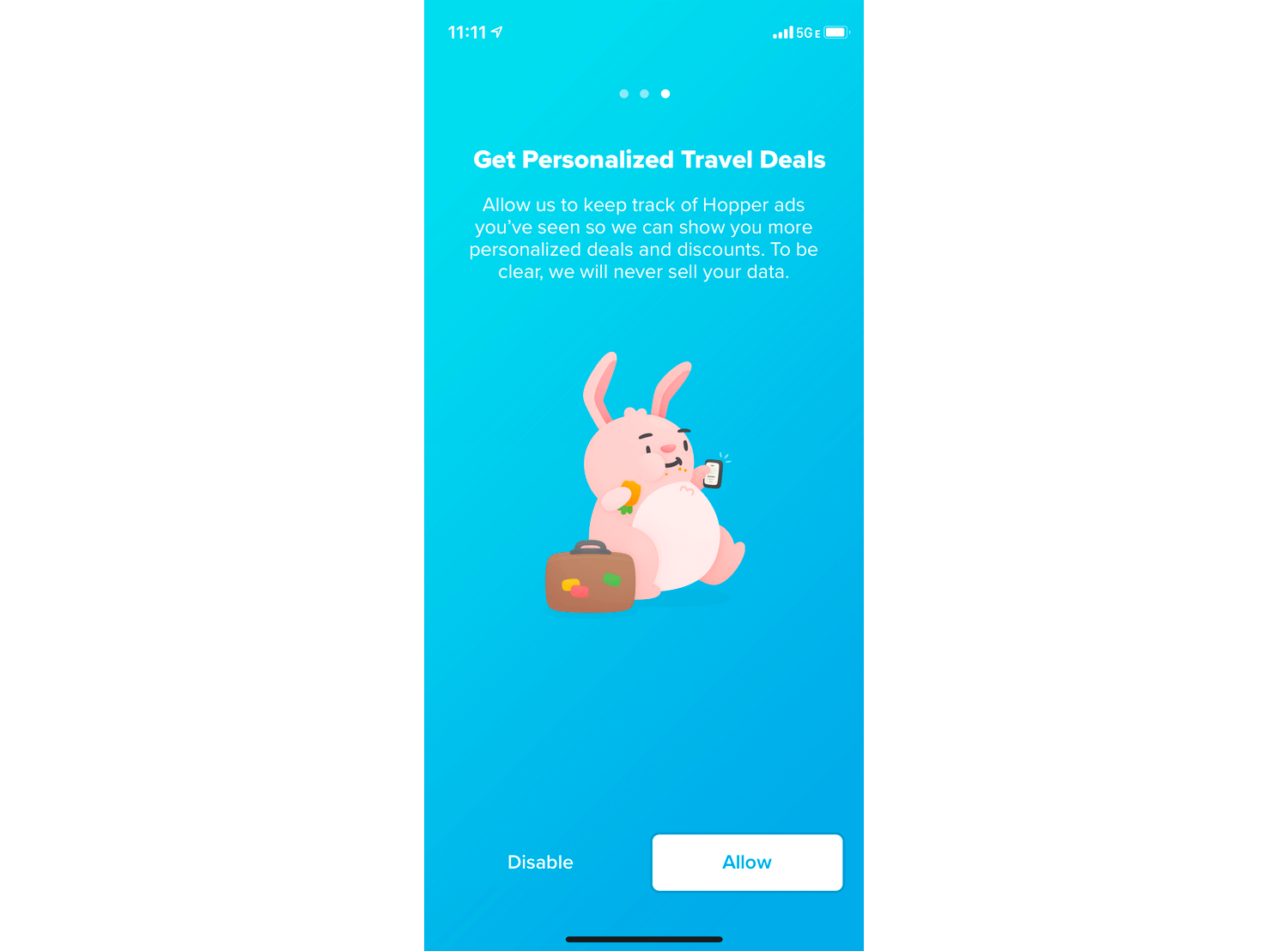 Hopper keeps things simple with a title and a short paragraph. That's it.

Remember, you can't incentivize users to opt-in, and for the most part, the prompt's options are very intuitive, so you don't need to give the user steps for allowing tracking. And while you may want to use this opportunity to "threaten" the user with what would happen if they don't opt-in, this isn't the place. There's actually no place for that because they wouldn't care.

Not doing all of those would allow you to keep things short.

This will make it easier for the user to flow into the next step as opposed to it coming up abruptly.

The BBC makes it very clear what to do next: 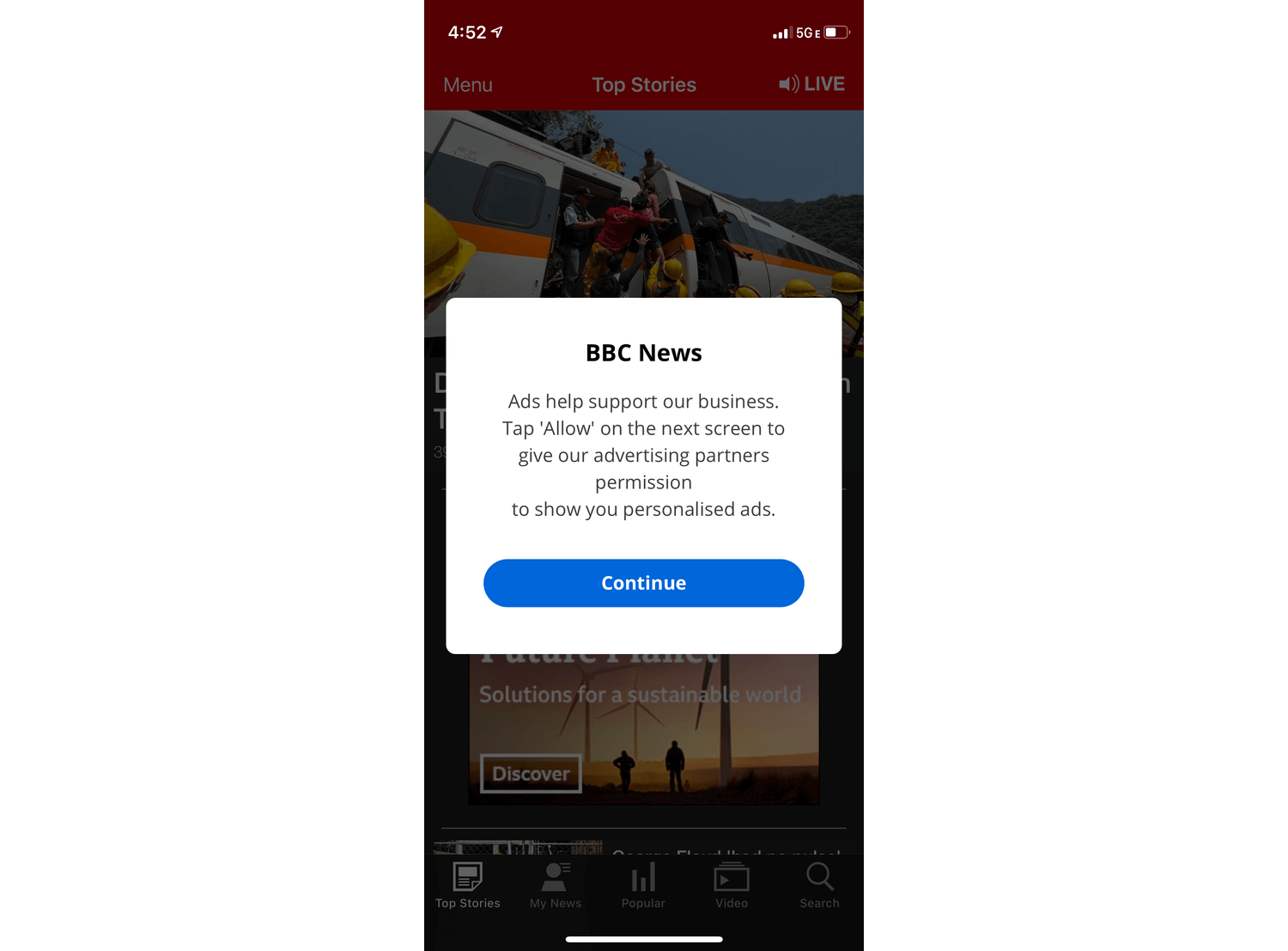 Now... I've seen quite a few pre-prompts that use "Allow" as the label of their button and others that have a "don't allow" option which prevents the actual prompt from triggering so it can be triggered later. Although some apps do it, Apple is against it and will eventually reject those apps. I wouldn't recommend trying to get clever here.

What About ATT Prompt Itself

A great pre-prompt will have you user ready to opt-in, but they still need to tap the "Allow" option in Apple's prompt. To help connect the two, you'll need to craft a good sentence in the actual prompt.

Or... if you've decided to skip the pre-prompt, which is not great, you'd only have the text in the prompt to convince your users of your legitimacy.

Either way, your copywriting session isn't over just yet.

The challenge with the prompt's text is that there's a single sentence, so you have to write very carefully. Here are three tips to help you get it right:

Headway, which uses a pre-prompt, keeps the copy direct and succinct. Well done!

Rentalcars went about it in reverse, and I bet you their conversion rate isn't great...

Can you tell what's wrong here? A couple of things are: 1. Who or what's Adjust? Users don't care about that. At all. 2. There's zero benefit to the user here, only the developer. Users won't look kindly on that.

Minesweeper didn't get the memo.

This developer is also trying to scare users into opting-in with the threat of irrelevant ads. But, do users actually want relevant ads? Most don't even know what that means because all ads are irrelevant to most.

More than 10,000 apps and games are already using ATT, including the likes of Spotify, Twitch, Coinbase, Clash of Clans, Headspace.

A fast way to get inspiration is to look at how they're doing it.

Downloading them all is not really convenient, but the community effort behind attprompts.com helps shortcut that. The site is a collection of screenshots contributed by app users who encountered an ATT prompt and pre-prompt in the wild.

I've been studying these prompts extensively and seeing how many of them simply aren't asking properly gave me the motivation to write this guide.

Don't Be Afraid to Experiment

Getting these right the first time is very unlikely. Much like crafting the perfect screenshots, getting copy that works well across the board is more about trying different things than it is about being clever once.

While you may think this is such a sensitive topic, it's better left unchanged, that's more likely how you'd get fewer opt-ins than more. Just like every other area of your app, try different things and see what works. When something does, double up. When something doesn't, undo it.

What Would Your Users Say?

Hopefully, you've picked up enough to craft copy that shows your users why they should support you with their privacy. If at any point you're still unsure, put yourself in their shoes and ask, "what would I say after reading this?". And be critical with yourself.