The Top Mobile Apps in August by Downloads and Revenue

Can you believe August is all over already? Feels like summer just flew by this year. A side "benefit" of limited mobility and around-the-clock WFH... But, that time we didn't spend outside had to have gone somewhere. That somewhere is Instagram. 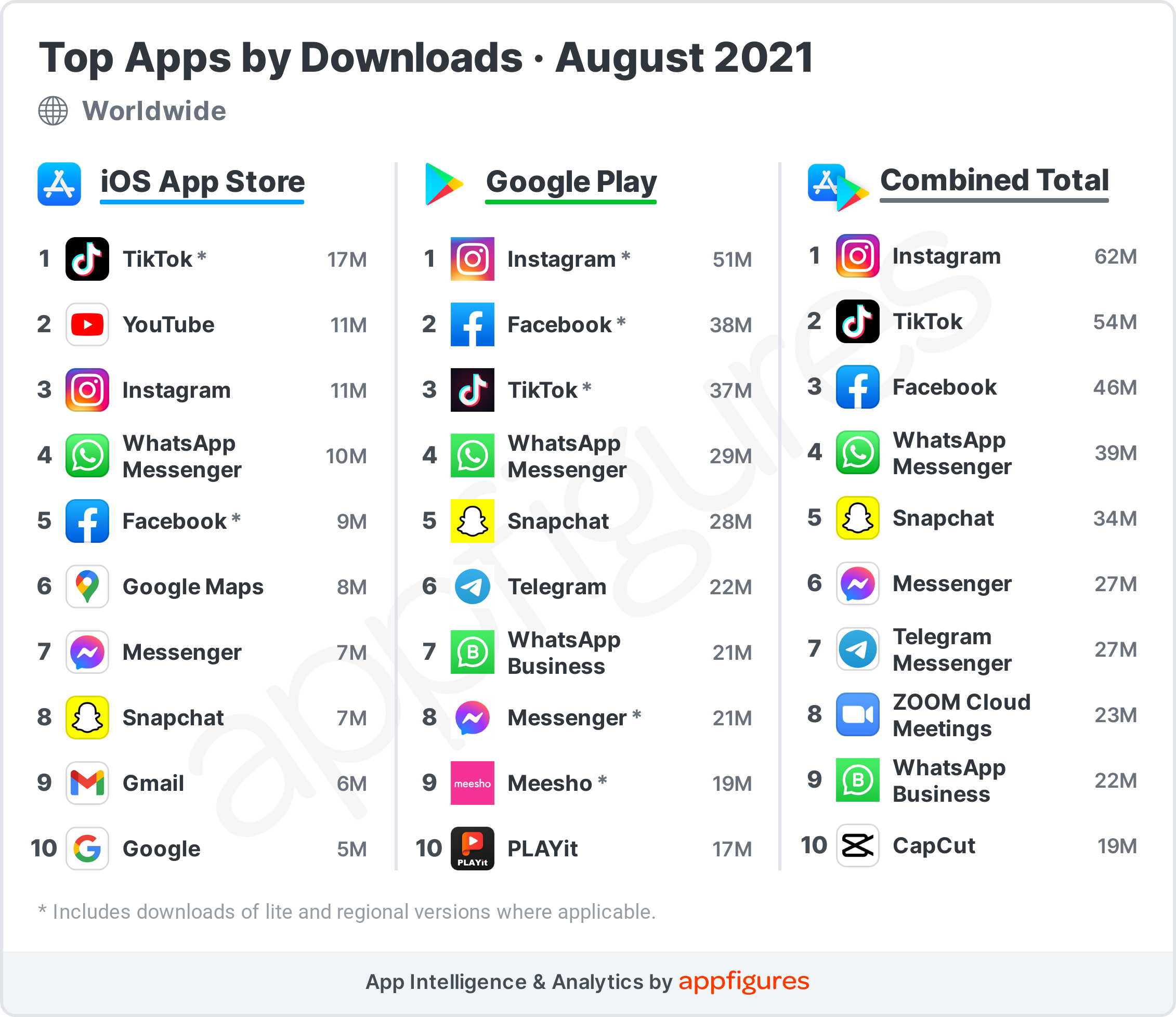 The most downloaded app in the world in August was Instagram, which grew 6% month-over-month to 62M downloads, according to our estimates. The bump helped it edge out TikTok for the second month in a row! Facebook's dominance continued to be on display as it owns three of the top 5 apps. TikTok, in second place, and Snapchat in fifth were the only holdouts.

While the charts were mostly similar to July, there were a few fresh(ish) faces. WhatsApp Business squeezed in at #9 with 22M downloads, and CapCut, TikTok's video editor, which seems to ebb and flow much more than I expected, added 19M new users and the #10 place in our list.

Together, the top 10 apps recorded 353M downloads, according to our estimates. About 2% lower than July's total of 361M.

Intelligence You can Trust

At a price you can afford!

The top charts change a lot less often these days, so we're adding a new section to our monthly report which focuses on a single category. Following the rise of Meesho, this time, we'll be looking at the shopping category. 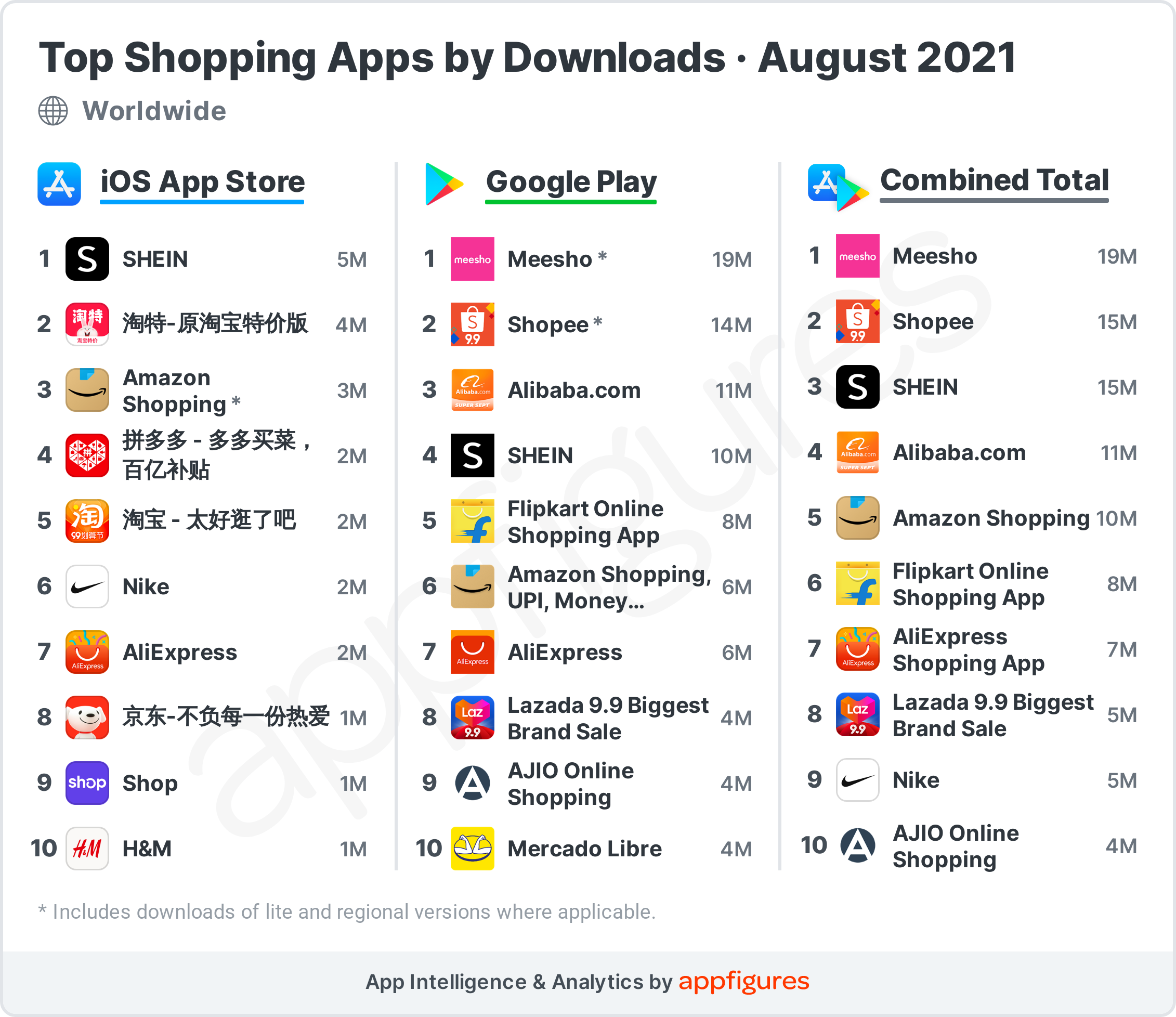 Meesho, India's fast-fashion success story, was the most downloaded shopping app in the world in August, beating Asia-favorite Shopee, SHEIN, Alibaba, and Amazon. And Meesho is only available in India.

That entire list makes up the five most downloaded shopping apps in the world in August, which together accumulated 70M downloads, according to our App Intelligence.

On the App Store, SHEIN was the top dog, beating shopping-king Amazon in a list that also included H&M, Nike, Shop (which isn't exactly a shopping app, but we'll let it slide), and several Chinese apps.

When it comes to money, while the list may seem a lot like that for July, the numbers are far from it! 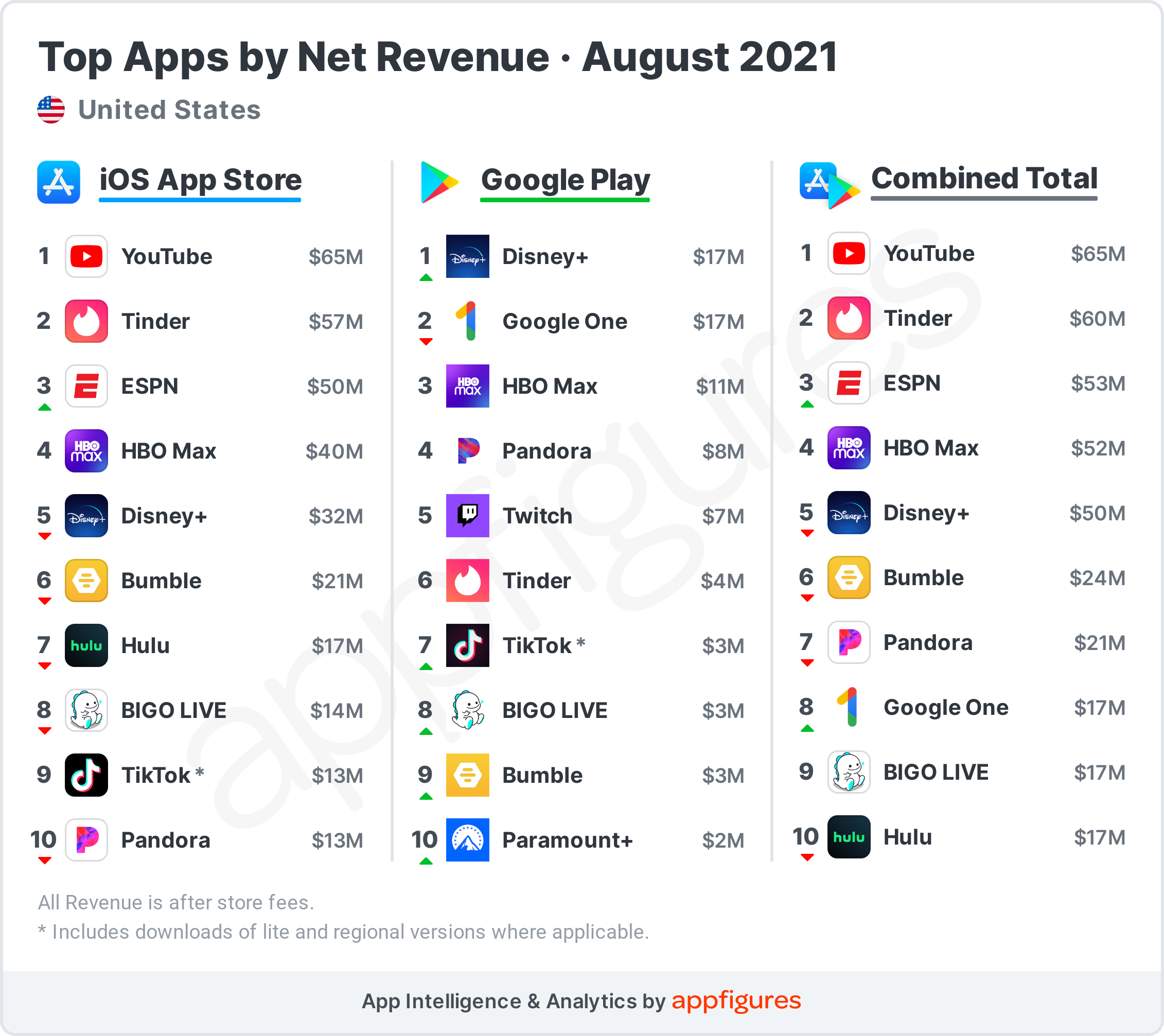 YouTube raked the most net revenue in the U.S. across both stores, with a whopping $65M take, according to our estimates. It also led the App Store with the same amount since it's monetizing directly on Google Play. Dating-destination Tinder was right behind it, followed by ESPN, which had a solid month.

The rest of the list, which included streamers, more dating, and Pandora, more or less matched July's. The only noticeable difference is the absence of Twitch, which saw a slight bump in U.S. revenue in August, but not enough to rank.

Together, the top 10 apps earned $374M of net revenue (that's after the stores take their fee) from the App Store and Google Play in the U.S., according to our estimates. That's a whopping 21% increase over July's $309M.