When Donald Trump took office four years ago, Twitter became the stage for political discourse. Politicians and their followers, on both sides, used Twitter to make announcements, duel, and even create controversy.

Twitter enjoyed the spotlight for a very long time, and then this summer, some felt Twitter is silencing them and found their voice in Parler. A Twitter-like service, which promotes free speech.

We covered Parler's initial success in June, but come election week, its growth exploded, doubling that initial spike and claiming the #1 app in both the App Store and Google Play in the U.S.

Is Parler the New Political Stage?

More controversy = more downloads, for Parler, and election week had plenty of that. 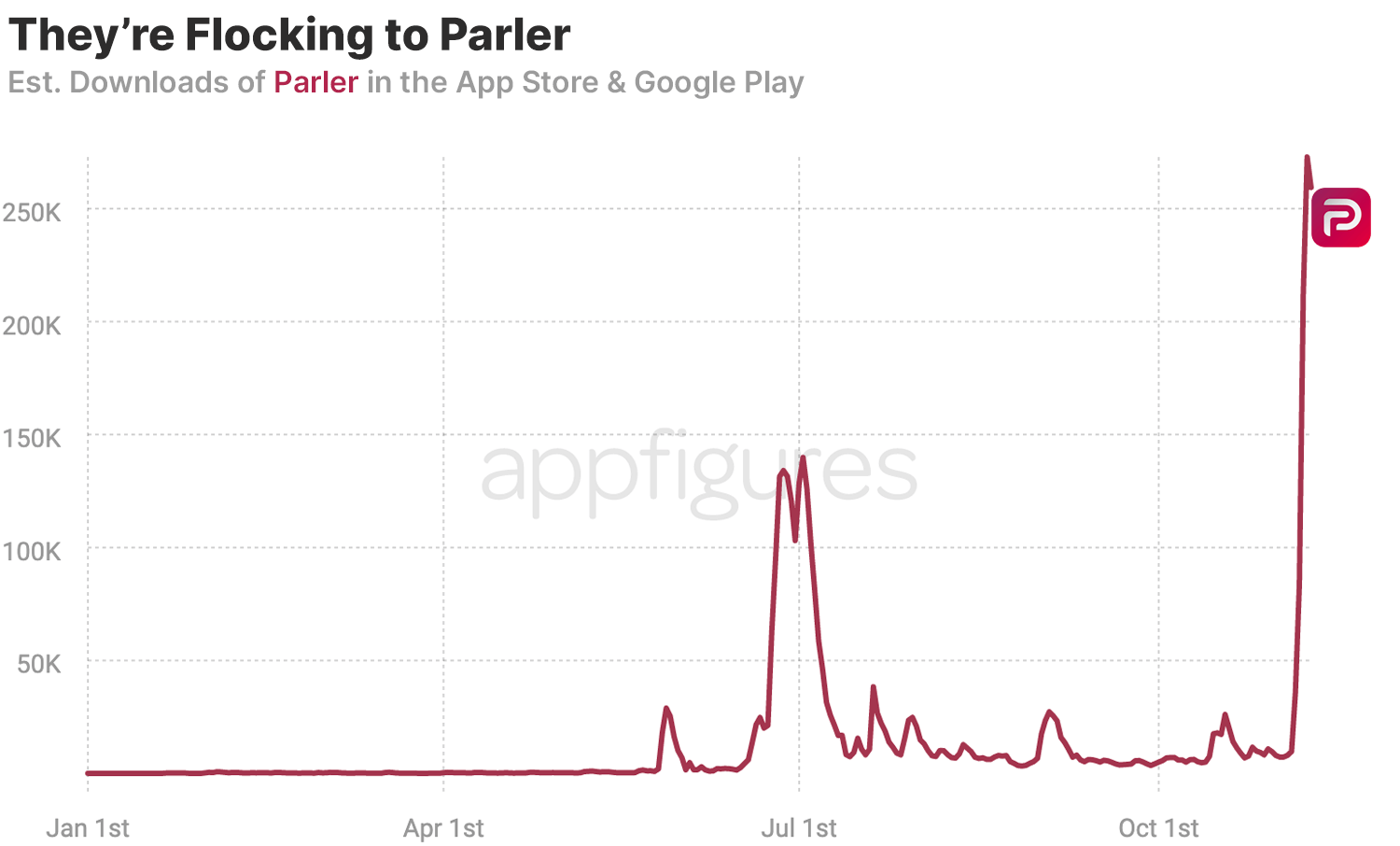 So far, in 2020, Parler was downloaded by more than 3.9 million iPhones and Androids all around the world according to our estimates, with the bulk, 3.2 million downloads coming from the U.S. For context, Parler saw just 156 thousand downloads in all of 2019, which is more than I expected for a service I've never heard of...

We estimate that in the week since election day, the period between 11/3 and 11/9, Parler was downloaded by close to 900,000 people, most of which are from the U.S.

Interestingly enough, the spike in downloads didn't come on election day or even the day after. It came on Friday and into the weekend, while mainstream news outlets still had not declared a winner. Is this trend a result of curiosity? A need to escape Twitter's censorship? Both?

Move Aside Fox and CNN

Speaking of mainstream news outlets, Fox and CNN, which many have flocked to for election news this election cycle, were no match for Parler. 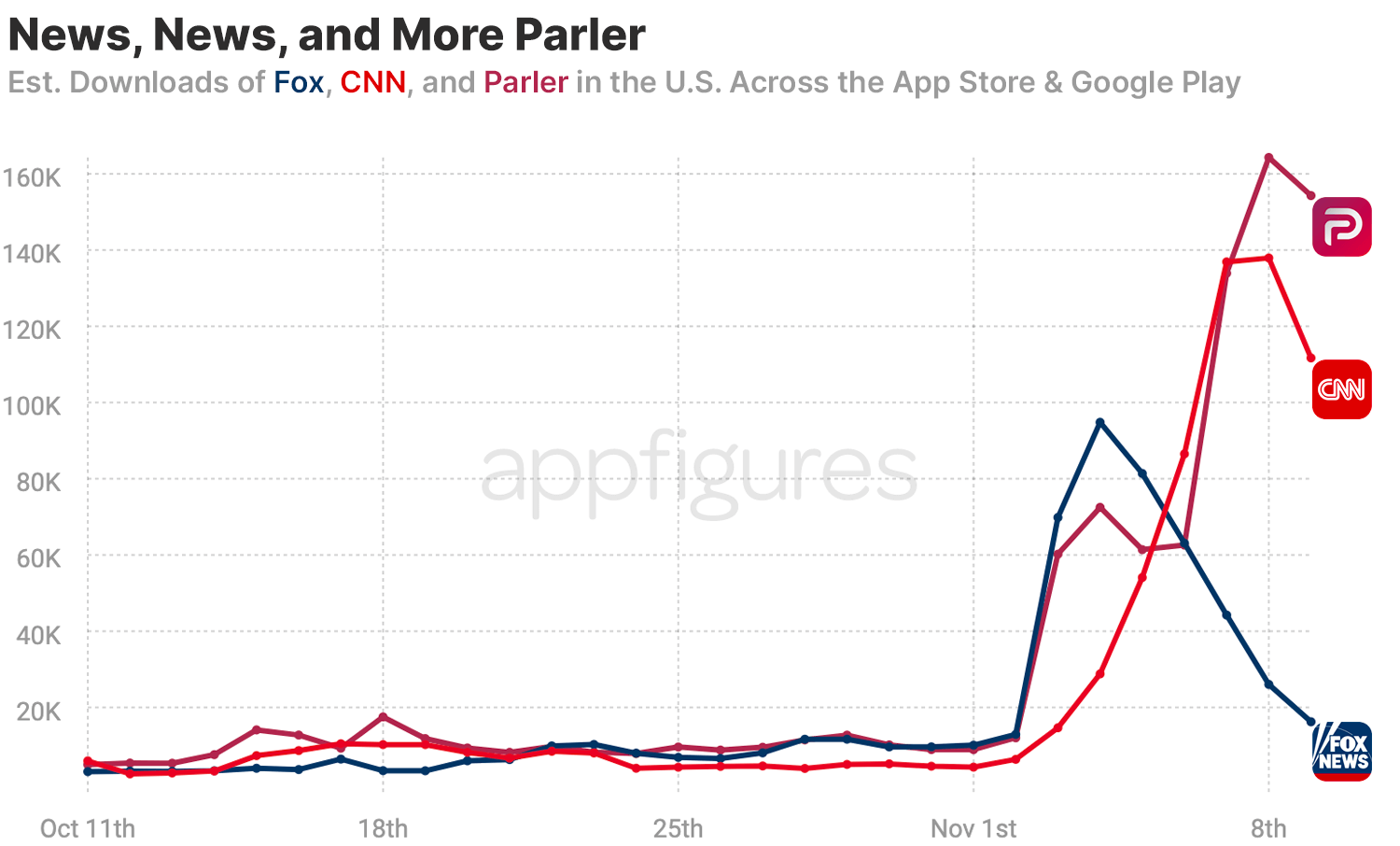 Although both apps got a barrage of new downloads on election day, that ended fairly quickly for Fox and wasn't as high as Parler.

In the U.S., Fox peaked at 95K downloads on Wednesday, while CNN continued to rise, peaking at 138K on Sunday. Parler peaked at 164K downloads on the same day, based on our estimates. This includes downloads on both the App Store and Google Play.

But Parler isn't the only one seeing more downloads. 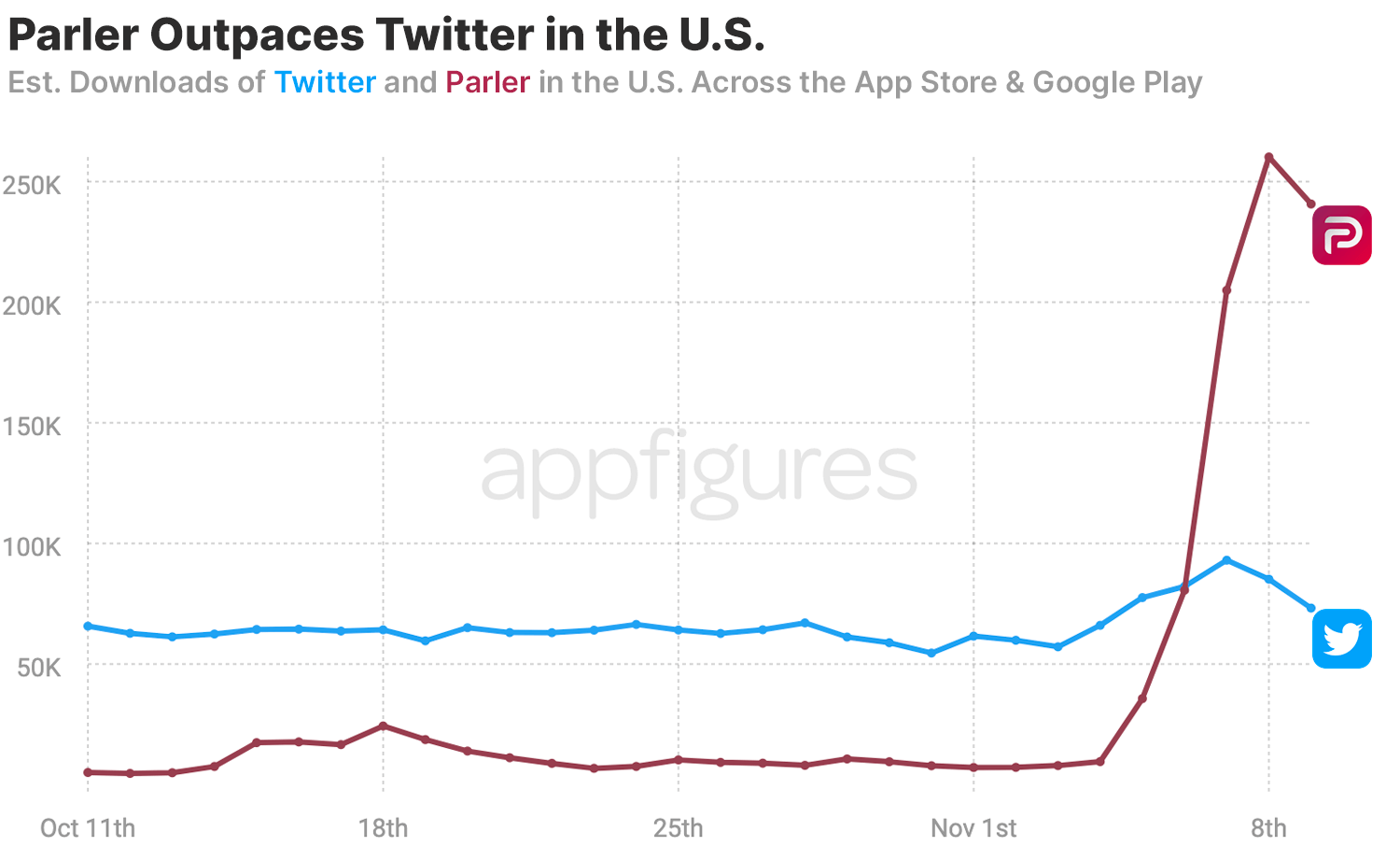 In the U.S., our app intelligence shows downloads of Twitter doubled around the same time as Parler, further indicating these downloads are less about news consumption and more about getting access to thought leaders on both sides. It also further cements Twitter's place in politics, raising interesting questions about its ability to control the visibility of information.

Keep in mind, these are temporary spikes which we don't expect to see sustained for too long, but as of Monday, global downloads were still up about 18%.

But... Will Twitter remain a political stage once Donald Trump leaves office? Will incoming president-elect Joe Biden take to his phone as much as the outgoing president did, and with as much intensity? Without getting political, I'll say it remains to be seen. Still, considering how easy Twitter has made it to consume information and how necessary consuming information has become, it's probably only going to get stronger in this arena.

The real question is whether Parler is here to stay as well, or is it a one-and-gone? We'll be keeping an eye on that, so subscribe to make sure you don't miss any future updates.