There are categories of apps, usually the ones that are very popular, where all the leading apps copy the strategy from each other. How does the algorithm decide which app to rank first? That's what we'll be looking at in this teardown.

I've been waiting to tackle this keyword for a long time. Dating apps have become the way for many couples to meet, or, at least for many wishful thinkers, to try. It's popular. It's competitive. And it follows all the rules. 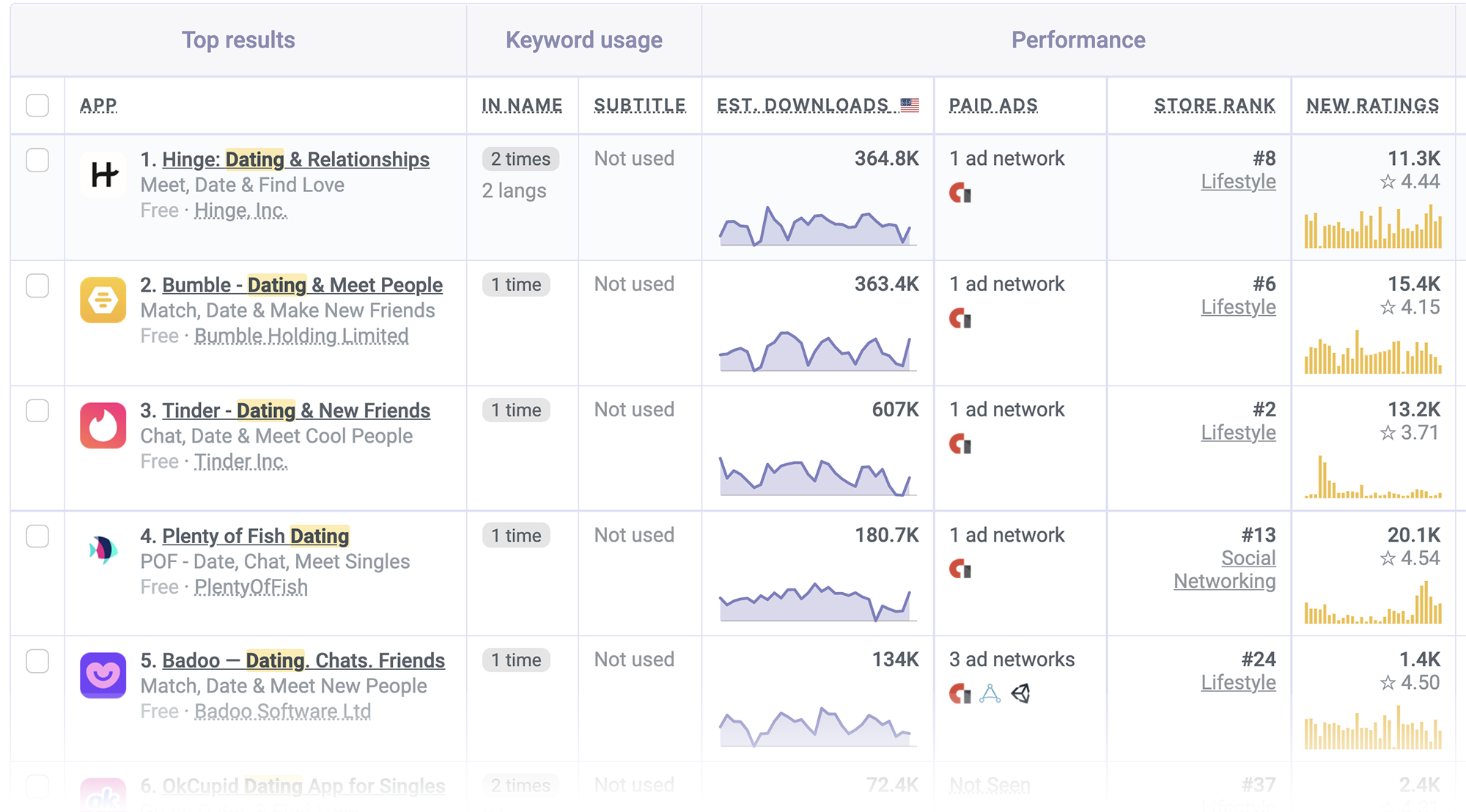 Before we get into this one, I have to say that this one gets a bit technical right at the top and shows the importance of focus. When the most successful apps in a category all use pretty much the same template for their name and subtitle, the algorithm has to get technical. This is precisely the case here because all five seem to have copied and pasted their ASO strategy, changing only a word or two.

In the top spot, we have Hinge, which uses the keyword in its name right after its own. That's the 8th character. This will be important in a minute. At 11.3K new ratings, it's very much in the same ballpark as second place Bumble and Tinder, which also use the keyword right after their brand name. Both of their names are one character longer, and they both use a space and a dash, so the keyword starts in character 10.

They also rock a similar number of new ratings. 15.4K and 13.2K, respectively. With larger numbers, the algorithm gets less specific, so 11K is pretty much the same as 15K as is 13K. If all else is identical, the number matters more, but that isn't the case here.

So, why is Hinge at the top? It's using the keyword first + has fewer words in its name and subtitle, which puts more focus on the keyword. It took a while to understand this, but it makes sense. We see a similar technical side to optimization with terms like "food delivery".

In 4th place, we have Plenty of Fish. It's got more new ratings, but not that many more, and even though it also subscribes to the copy and paste school of ASO, its name is longer, so the term starts at character 16. Waaaay after the rest. If it didn't have so many new ratings, it'd be much lower. It also seems to try to differentiate itself by being in a different category. Why? Probably to rank higher in the category. That's kind of an old trick that I've always seen as a mistake.

Last for this set is Badoo, another user of the template. It does everything right (in that sense) but doesn't have enough new ratings to go any higher than the generosity of the algorithm has already taken it.

FYI - There are a bunch more competitors that also use the template but didn't make it into the top 5. They have decent ratings and even downloads but don't make the cut for a variety of technical reasons. If you want me to analyze below 5th place in the future, let me know.

Focus is still the name of the game. It's even more important when the competition uses a very similar (aka the same) strategy. Count every single character and make sure you help the algorithm understand what's most important to your app.