When it comes to ranking well, the common misconception is that it's all based on downloads. But... it isn't. We'll look at that (and another good tip) in this extra long Teardown.

Business apps and utilities do very well in the App Store. They're mostly silent successes because there's very little showing off with a scanner app. Yet, as you can see from the scores above, the keyword is popular and competitive, and the apps that reach the top get quite a few downloads and earn millions for their developers. 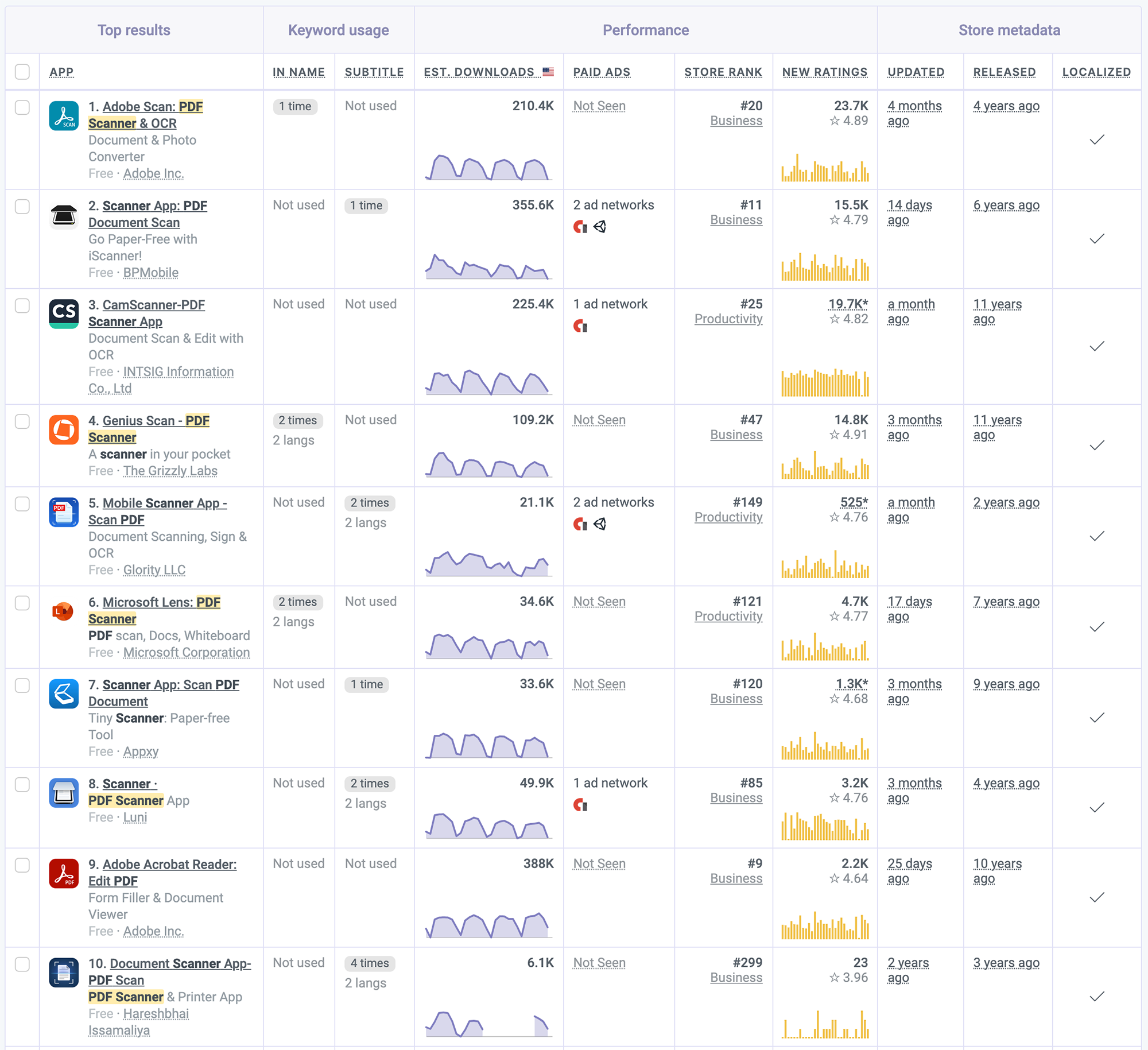 Starting at the top, we have Adobe Scan, which gets everything right here. Both words are present in the name and are not repeated in the subtitle. The name and subtitle feel a bit stuffed, but with the most new ratings in the entire list (of top 10), it's not a real problem. This is a pretty solid setup for a top app and one that will make it harder for others to compete.

Dropping to #2, Scanner App, we see very good performance (aka. downloads), but that's not a strong signal. What works here is that both words are in the name and not in the subtitle, and the app is getting a good number of new ratings. With the right keyword placement, having the most new ratings isn't essential, which means this one can focus its keywords a bit to get more love from the algorithm.

CamScanner, at #3 is an interesting example of how important spaces are. The app uses both words in the name and doesn't repeat either, which is very important. It also has more ratings than #2. So why isn't it higher? I suspect the key is in the hyphen between CamScanner and PDF. We know the algorithm drops some characters, but when it comes to separating words, it's better to go with a space and not punctuation unless you go with the very basic set.

I could be wrong here, but I've seen this repeat across a bunch of different keywords. I'd err on the side of caution and always surround words with spaces. In this case, they have the characters.

At #4 we have another potentially interesting case. Lots of new ratings and using both words in the name and a hyphen that's surrounded by spaces. You'd expect Genius Scan to rank much higher, and you'd be right. If... it didn't make the cardinal sin of repeating words between the name and subtitle, which really devalues them.

And in #5 we have an example of just how important it is not to devalue keywords. Mobile Scanner uses the words in its name correctly but only has a few hundred ratings. Looking down the rest of the list, most other results have thousands of ratings. So how can it land a top rank? Easy answer (that you must have seen coming from a mile) it doesn't devalue its keywords by repeating them.

It's such a powerful advantage!

Microsoft Lens (#6), Scanner App (#7), and Scanner · (#8) all have more ratings than #5 and also repeat one or both words between the name and subtitle, which really hurts them. All three can get much better ranks if they remove the duplication. It's that easy.

Adobe returns in #9. While Acrobat isn't really a PDF scanner, it does have something to do with PDFs and likely has "scanner" in its keyword list. The keyword list combines with the subtitle when it comes to indexing. The weight is lower, which is why Acrobat's thousands of ratings can only push it as high as 9th place.

#10, which is fairy brandless, duplicates both words in its subtitle. Just like Luni (#8). That alone would net it 9th place, but it also has very few new ratings, which means it can barely hold on to 10th.

In this case, removing the duplication and focusing the name and subtitle (aka. keeping things short) should give the brandless app a good push, at least above Acrobat and possibly as high as 6th.

And that's all I have for you today. Subscribe to the newsletter for a new Keyword Teardown next week.