Keyword strategy isn't just about selecting the right keywords for your app or game, but it's also about how you use them. In this teardown I'll show you how important it is to place keywords in the right place, and what the right place is.

Apps that enhance photos and videos are all the rage these days. With phone cameras continuing to improve and social media continuing to simplify into just visuals, the need for simple photo editing tools is high. Looking at the numbers confirms this. 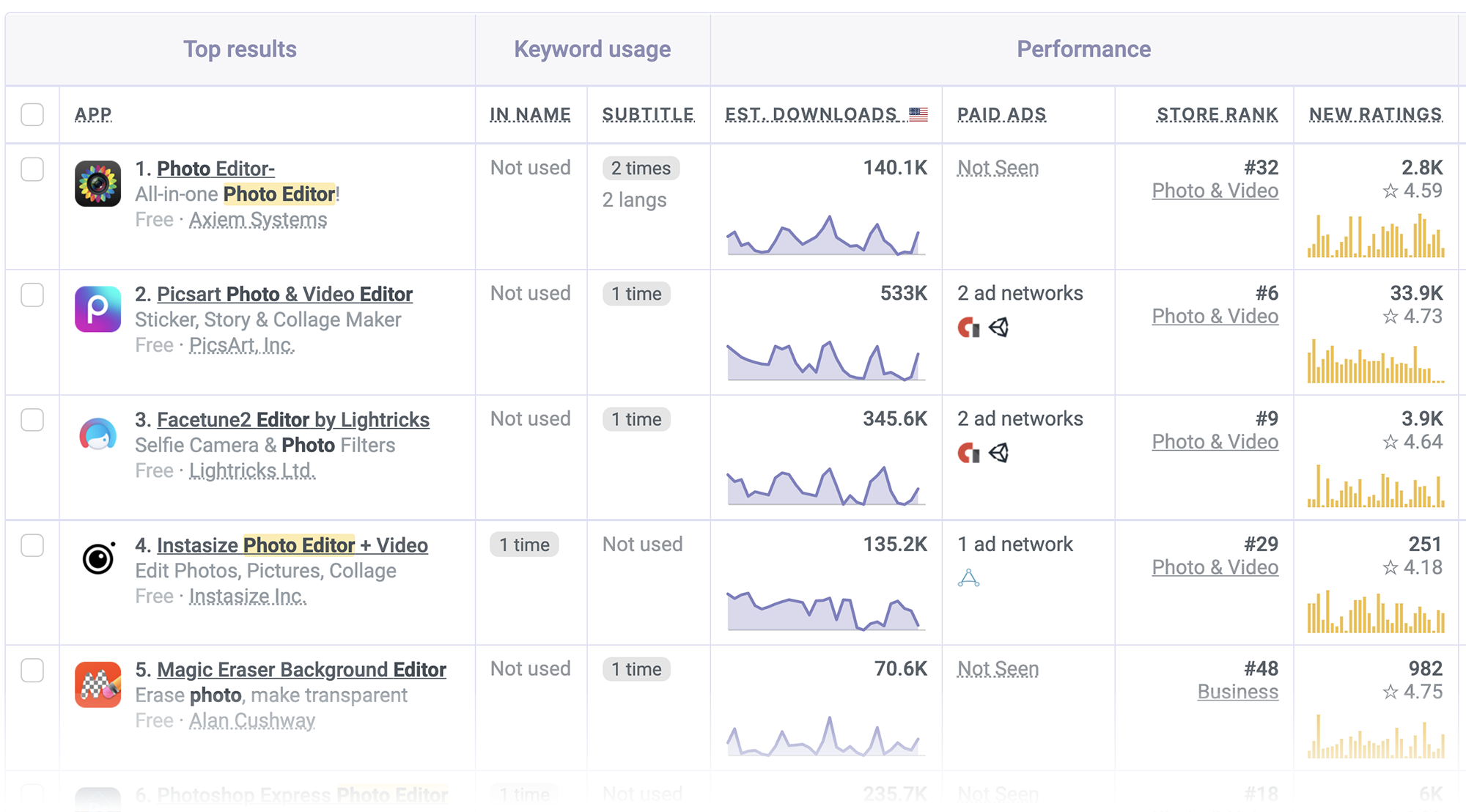 Let's dive right in because the only thing I can see when looking at the first result, Photo Editor- is a broken hack and a fortunate mistake. I wonder if they realize what they've done.

So first, the hack. See that dash at the end of the name? That's not a typo. Apple requires names to be unique, and the dash helps because this isn't the first app to choose such a good name. But the algorithm drops the dash before it indexes, so it's like the app's name is the keyword.

Neat, right? Well, it's a hack, so I'll let you choose. But the mistake here is that by repeating it in the subtitle, all the good algo juice devalues instantly. We're not done, however, because the small number of words and repetition still put a lot of weight on the keyword.

So, it can still tower above rivals with more downloads and ratings.

This was a very complicated one. The rest are much more straightforward.

At #2, we have the leader in downloads and revenue (which I did an App Teardown of a while back). Picsart uses the keyword properly in the name and doesn't repeat it in the subtitle. It only manages to snag second place, even though it has the most new ratings because there's less focus.

Facetune, in third, also targets the keyword directly but splits the term across its name and subtitle. This is a very competitive keyword, but Facetune has enough new ratings to eclipse other competitors. That's why it can sit pretty at #3.

Instasize, the fourth result, uses the keyword right in its name. That allows it to climb into the top 5 even though it has substantially fewer ratings. By a whole order of magnitude.

The last result in this set shows us what could have happened to Facetune if it didn't have as many new ratings as it has. Magic Eraser splits the term in two and doesn't have enough new ratings to climb higher. But it still manages to squeeze into the top 5. I tried to think of ways to rework the name to include the full search term, but given what the app does, it's somewhat impossible (easily). It might also be somewhat misleading.

Either way, moving it into the name fully should spring it up at least one spot.

Splitting a popular keyword between the name and subtitle isn't a great idea. The closer multi-word keywords are together the more the algorithms will want to rank your app higher in search results. And, repetition is (almost) always evil. When you repeat an important keyword in the app's name and subtitle you tell the algorithm it's not as important and it gives it less weight. it's as simple as that, so don't do it.