There's something many developers do, maybe unknowingly or maybe because they think it'd help (but it doesn't) that really hurts ranks. If you've read any of my previous teardowns you might have a guess at what that it. Duplication... When you use a keyword int he name and title it hurts your rank.

Let's have a look at a fairly generic term that's pretty popular. Puzzle is a genre of games that you'll find many who don't consider themselves "gamers" to play, which is why it's got a popularity score of 58. 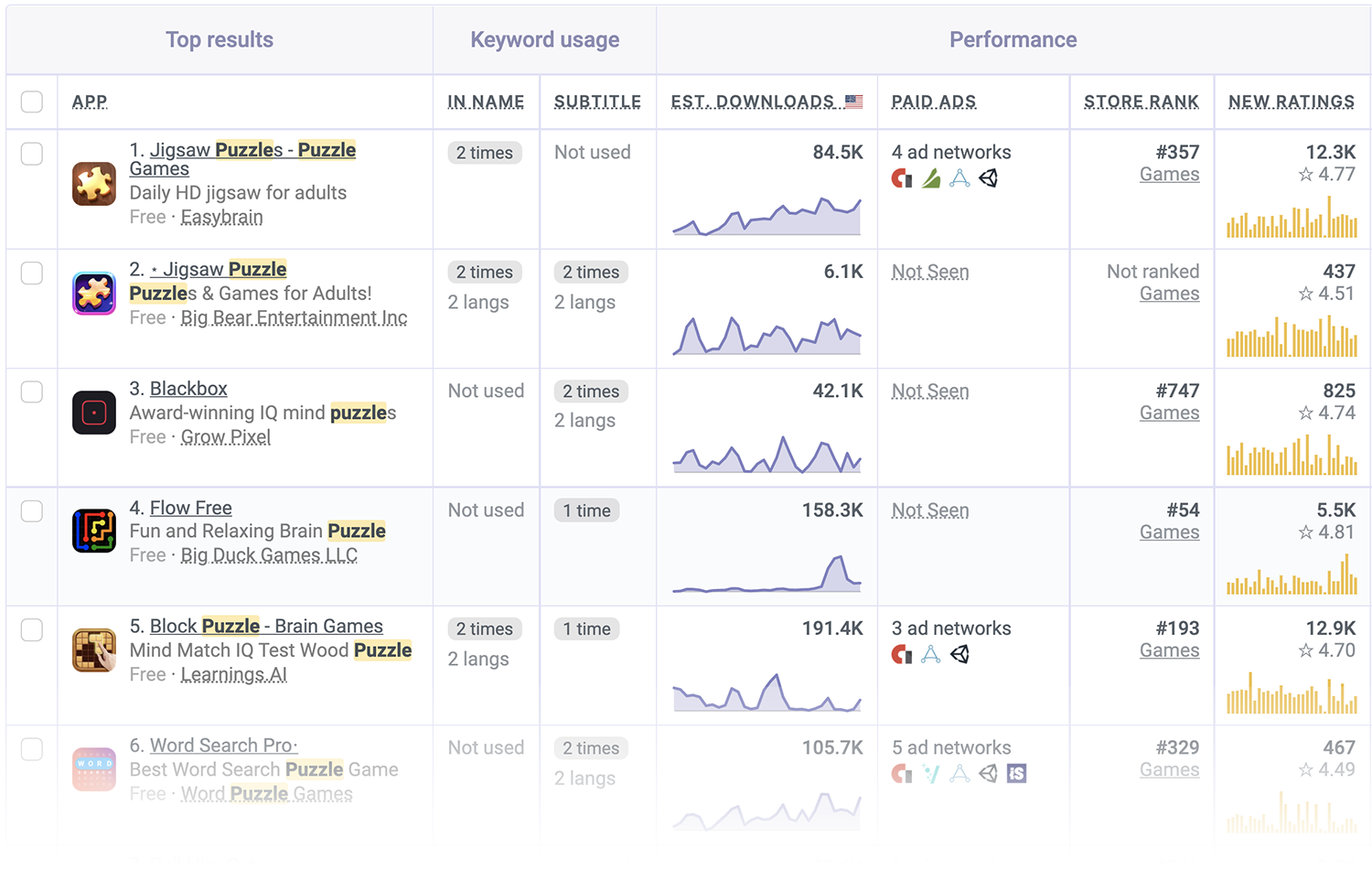 At first glance, I see a few odd things here, enough to make a real list:

Much like what we've seen before, these all simmer down to keyword placement and weight distribution.

Let's start at the top, with Jigsaw Puzzles (which I did an App Teardown on a while back). The app has the second most number of new ratings, the keyword in its name, and is the third in terms of downloads. With the exception of #5, which we'll get to in a bit, Jigsaw Puzzles earns its #1 rank for its massive number of new ratings, and the downloads don't hurt either.

At #2 we have another Jigsaw Puzzle, and even though this one has very fews downloads and new ratings in comparison, it's the only other app to include the term puzzle in its name. Again, with the exception of #5, which we're ignoring for now.

Quick note - using the same keyword twice between the app's name and subtitle, something that's happening a bunch in this group, isn't necessary or helpful. In the best case, it does nothing, and in the worst case, it lowers your rank, as we'll see with #5.

The #3 result, Blackbox, could be the #2 result fairly easily. It's got more downloads and ratings than #2 but doesn't have the keyword in its name. Adding it will push it up, and longer-term will also help all other keywords that include "puzzle" in them. It's a net win.

Apple's algorithm cares about trends, which it interprets as a signal for demand. An up and to the right trend = people are interested, while the opposite makes the game seem less relevant. I suspect that's what's happening here. When it comes to growth, stability usually outlives spikes. As long as it's stable growth.

And now the one that's most confusing. At #5 we have Block Puzzle, which has the most downloads, the most new ratings, and mentions the keyword very early into the app's name. So, in theory, it should be the first result, but there's one little thing that it's doing that's really hurting its chances.

This isn't something you'll hear about often, but when you use the same keyword in the name and subtitle, the algorithm has to pick one and ignore the other. It needs to do that so it can assign the proper weight to it. Guess which one it chooses?

So, by having the keyword early in the name (great) and last in the subtitle (worst), the algorithm is dropping the first and giving the keyword very little weight. That's why all the keywords and ratings aren't pushing it up.

The fix is to drop the last mention in the subtitle. Results should follow.

This one was busier than the rest. If you've ever thought ASO in 2021 wasn't for games, I hope this makes you rethink that.

The algorithm ignores repetition. It does this in the order you don't want it to... Which means, it ignores the mention in the name, which carries more weight. So the algorithm only sees the less valuable instance of the keyword and that hurts your ranks.