There's a trick that's as old as the App Store itself that I wouldn't exactly call "legitimate". The thing is, it's 2021 and this trick STILL WORKS. Why????

A great keyword to show off this trick is to look at solitaire, a type of game that has a special place in the hearts of many. Looking at the data we can see it's in high demand. 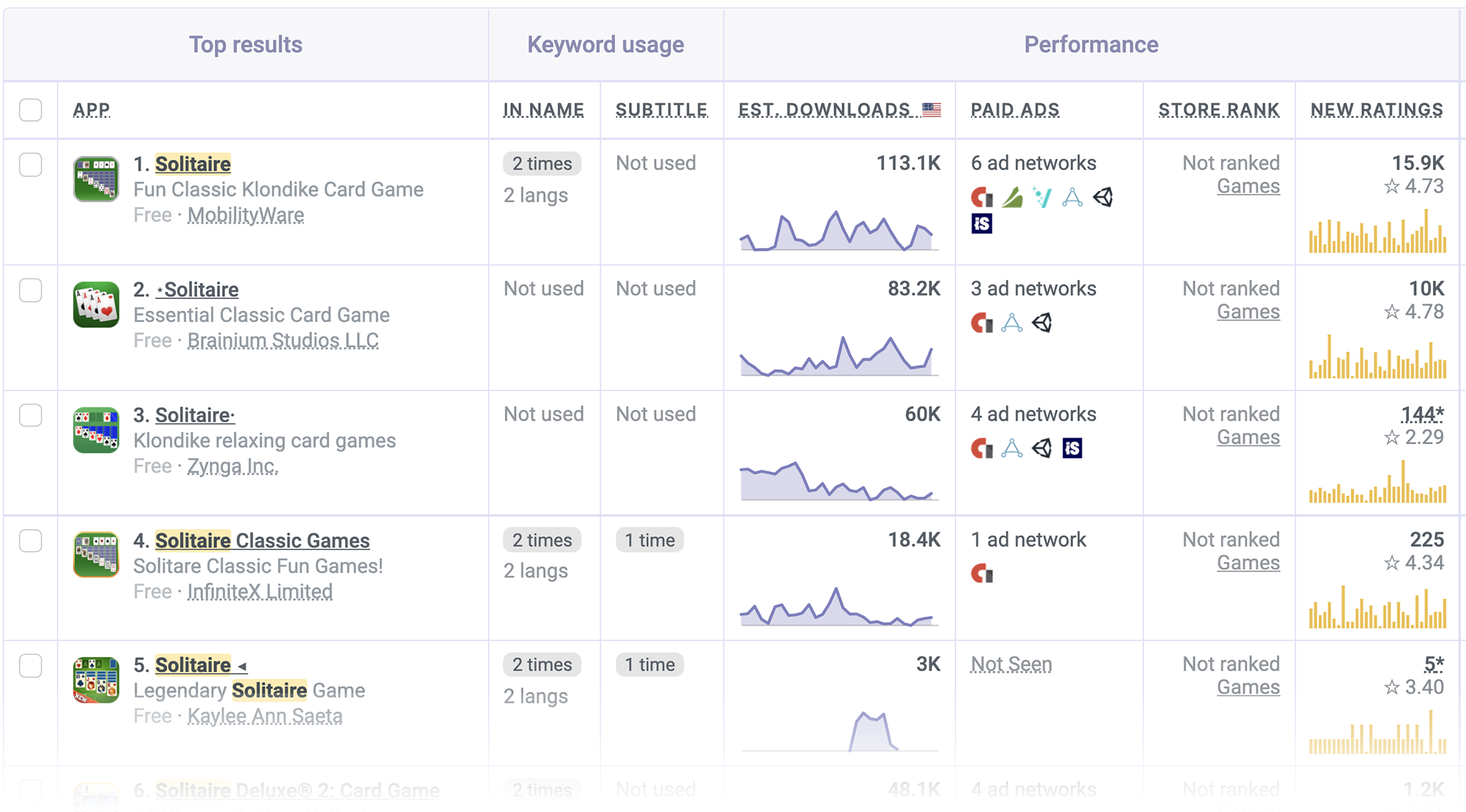 Games are notorious for finding and (ab)using every trick possible to get the algorithm to rank them higher. That's exactly what we see in this super competitive keyword. If you're not sure what I'm talking about, it's the strange symbols you see next to the names of three of the top five results.

Before we jump into analyzing the results, I'll say that I don't encourage using tricks like this one. Apple also hinted at how they'll stop working in the near future, but that was years ago, and as you've already seen, they still work.

At #1 we have an app by the name Solitaire. Nothing else. It should come as no surprise that it leads. If you've read any of my previous Teardowns, you'd know it's because the algorithm puts all of the weight it has on this single word. But with the most new ratings of the bunch, it's holding firmly to this spot and unlikely to move in the foreseeable future.

Competing with a single word is hard, but both 2nd and 3rd places use a character in their name that allows the name to be unique but the algorithm filters before indexing. It's a trick I used to see a lot more often 5+ years ago, but still works, and I've seen a few apps (not games) use it successfully as well.

By focusing all of the weight the algorithm has on a single word, the #3 result, which barely gets any new ratings, manages to snag such a high rank.

Update: A few readers noticed that what I thought was duplication in #4 was actually an intentional misspelling, so I've updated the analysis.

At #4 we have one that isn't using the symbol hack but is using another old-school one. Solitaire Classic has the main keyword up front, which alone isn't enough to snag this spot with the couple hundred ratings it has. But, it duplicates a bunch of keywords from the name into the subtitle which drastically cuts down on total words and gives the main keyword more weight.

It's one of those times where duplication is helping because it isn't the main term. I still don't recommend it because it looks werid.

The "hack" it's using is misspelling the keyword in the subtitle to target users who type it incorrectly. This was very useful a few years ago because the algorithm didn't understand misspellings. These days it does, and because the only difference here is a missing "i" the algorithm can detect it fairly well so it isn't too helpful. With the addition of auto correction in search a few years ago, this is much less useful.

But, this keyword is so old school that it's still useful. I looked up the popularity of solitare (missing "i") and right now it's sitting at 52, which means auto correct isn't doing its thing.

Should you optimize for misspellings in 2021? I'd say it's worth inspecting misspellings. If you come across a popular one you should try optimizing for it, starting with the keyword list and slowly going into the subtitle.

Slipping into #5, we're back to basic hacks. The little triangle there does pretty much what the garden variety of circles do for those other games. With nearly no ratings, this one still manages to rank because of it.

But this app can go a spot higher fairly easily. Can you spot the error here? Duplication! By repeating the keyword in the subtitle, the value it gained by only having it in the name nearly disappears. It's still good, but not great.

Some characters help give your app's name uniqueness and are ignored by the algorithm. Combine this with everything we know about the importance of focus, and this trick allows apps to focus on a single, very popular keyword, even if someone else already "took" the name.

You shouldn't do this. Let me be clear. It's a hack and is frowned upon. But I shared it so you know about it in case your competitors do it.

#67 - Are Longer Keywords Worth Optimizing For?

Should you include long keywords in your ASO, or should you eliminate those from your list?