It's somewhat common knowledge that all the high-popularity keywords are taken. Or, at least that's what I hear from many developers. Well... I found a keyword that's pretty popular but isn't being fought over. I call that an opportunity.

Travel is a very popular term, as you can see by its score above. But as you can see below, the apps you'd think of when you think of travel apps aren't even optimizing for it. So, apps with very little performance (aka. new ratings) can rise to the top easily. 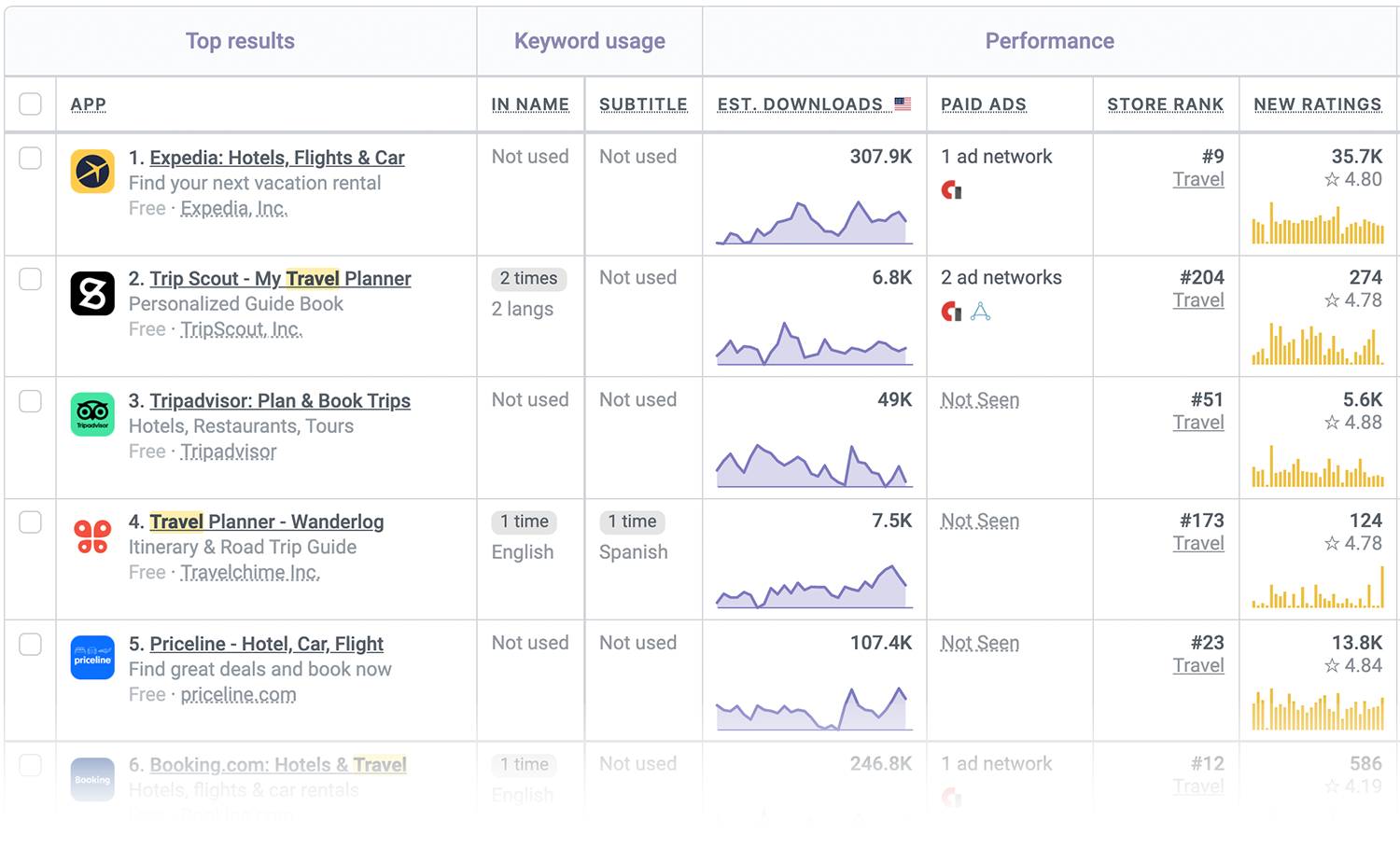 Let's have a look at the results. We can see the shenanigans starting with #1, Expedia, which isn't even using the keyword in the name or subtitle. It's using it in the keyword list, and manages to get to the top because it has many, many, many, more ratings than all other results.

In second place we have Trip Scout, and here's why this keyword is so interesting. Trip Scout manages to earn the second spot in a keyword with a popularity of 49 (pretty high) with just 274 new ratings. It's not because ratings don't matter, which is something I hear more often than I'd expect, but rather because something else matters most.

Trip Scout uses the term in the app's name. Now, with a few more ratings--probably in the 10K range--Trip Scout can challenge Expedia even though Expedia has 35K ratings. All because of proper keyword placement.

Continuing to #3, we see another instance of the keyword list + lots of ratings. Tripadvisor doesn't use the term in its name but rather just the keyword list. But it's getting more than 5K new ratings a month, which helps it secure the third spot.

Not the second, which is, just by the sheer number of ratings, should have been.

In 4th we see something similar to second. Wanderlog is using the term in the name but has just a tad over 100 ratings. So the algorithm obviously likes it for this keyword, but with what amounts to a handful of ratings, it can't do all too much.

Priceline has the term later in the list because it's ranking lower than Tripadvisor, which has about a third of the ratings.

And again, if you think ratings aren't what matters, look at this and rethink this. They matter quite a lot, but they come after the algorithm can see your keywords indicate relevancy.

Keyword placement is critical for getting good ranks. The best placement is very early in the app's name. The least good is at the end of the keyword list. But, anywhere between them will help the algorithm.

#41 - The Secret to Generic Keywords

App Store Optimziation for games is a bit different than for apps, but when it comes to ranking, the same rules apply.