Does the algorithm care about current numbers or trends? That's a question I hear fairly often, and the "simple" answer is both, but a big enough change in trend is a good signal for the algorithm. We'll look at what this means in this Keyword Teardown.

Oh, and there's another storyline in this teardown that has to do with ratings.

News is an interesting keyword to keep an eye on because it's popular, but downloads are fairly stable. Until something big happens, and then it spikes almost instantly. Watching the before and after is really helpful when trying to understand how the algorithm works.

In this case, it'll help us understand how the algorithm handles boosting apps that have a strong positive trend. 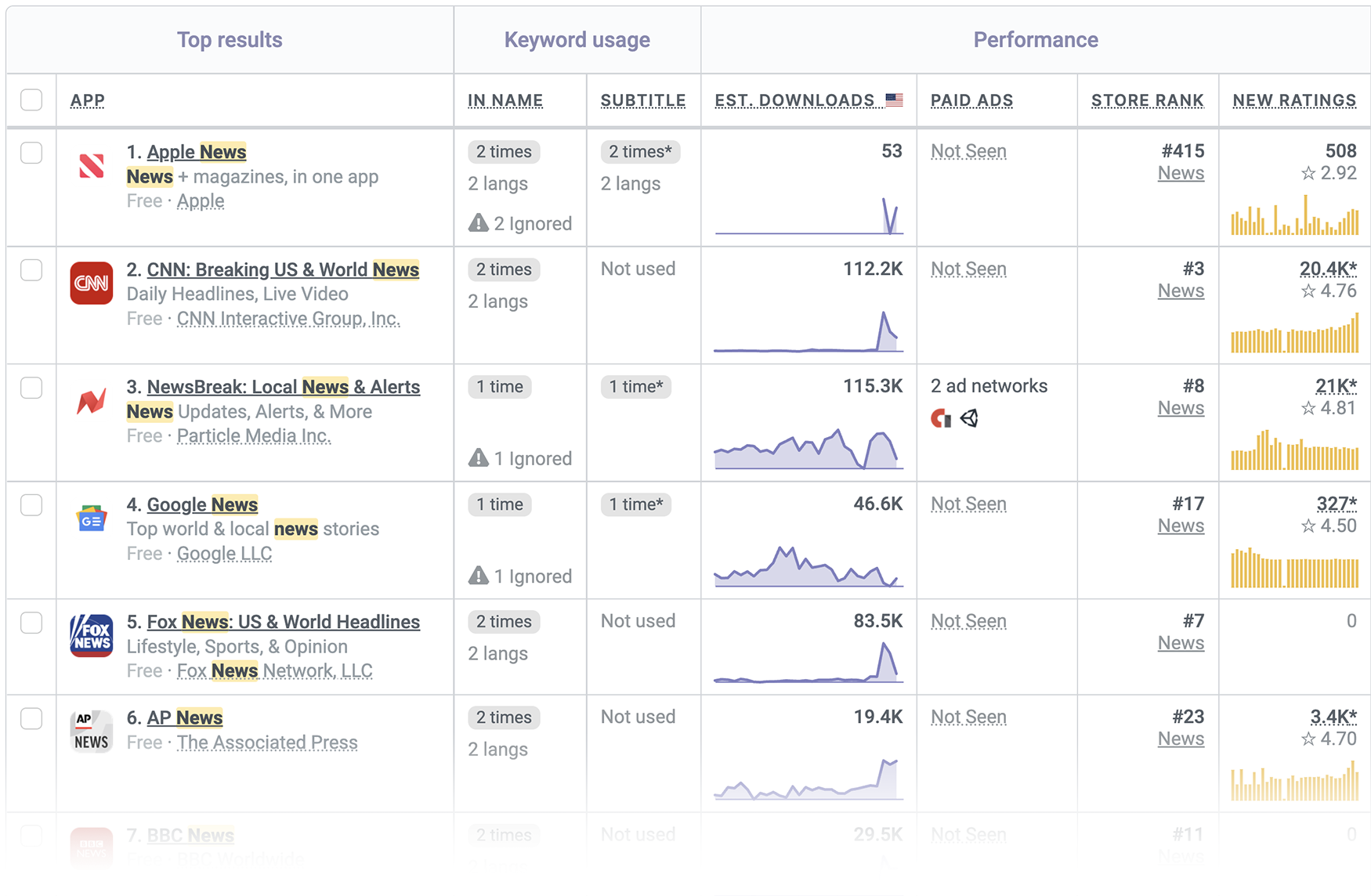 The top search result for the keyword news is Apple News, which shouldn't really be the first based on its performance and keywords (few new ratings, duplication, and I bet it's got nothing in its keyword list). I'm going to skip it for obvious reasons.

Right behind it is CNN, which does everything correctly. There's no duplication, there are lots of ratings, and even though it looks like it's hitting the bug we discovered in Keyword Teardown #47, it's actually not because the name is 29 characters long. I'm not sure if it's luck or preparedness, but it worked!

Note: As I was analyzing, I noticed the ratings looked a bit odd. When I compared the apps in the Competitors report, I noticed Apple deleted a bunch of ratings for all of them on Feb. 9th, and that's making the numbers you see in Inspector look a bit weird. 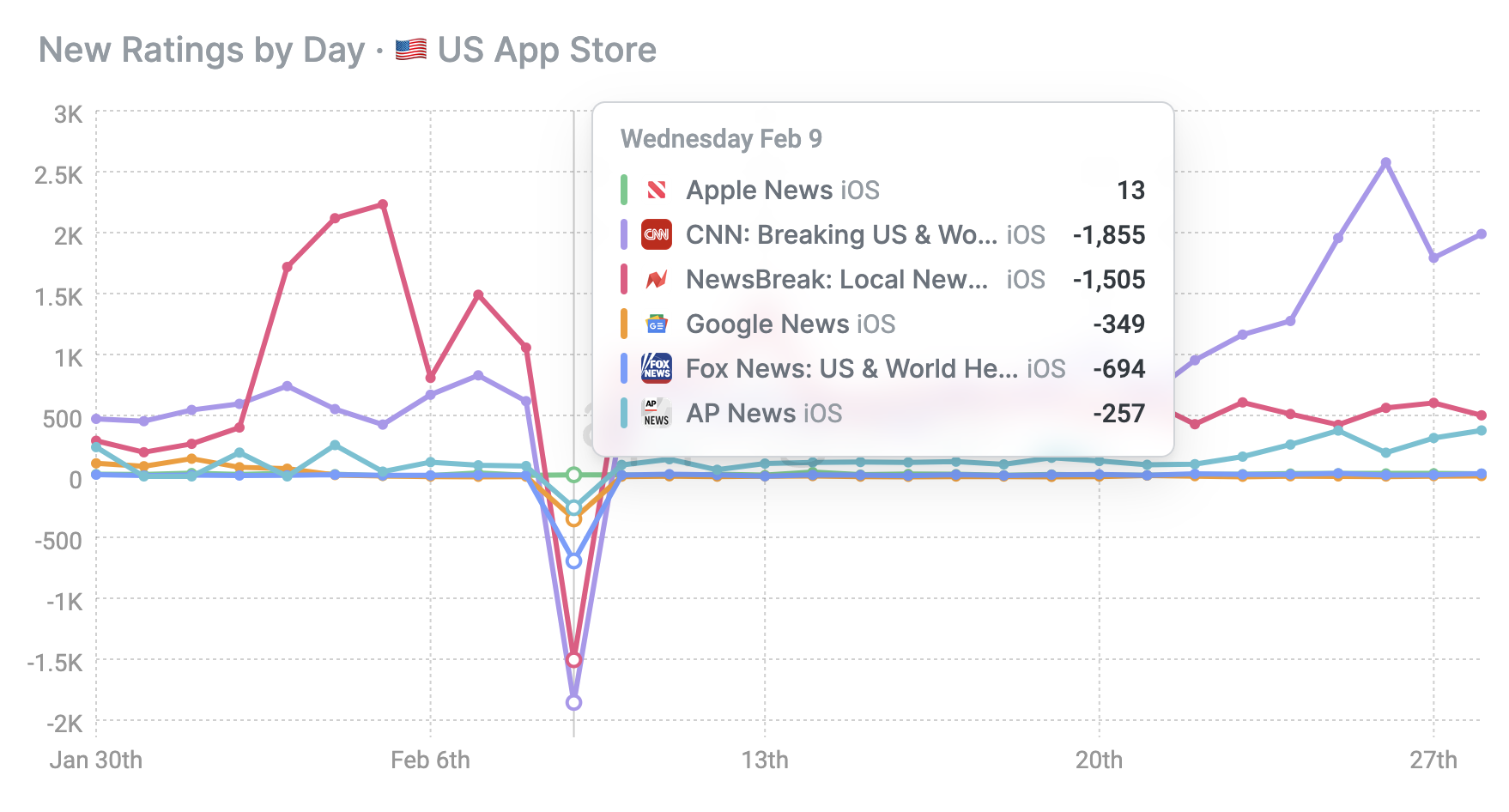 I call the drop on the 9th a sweep because I imagine it's Apple sweeping for fake ratings. I don't know that for a fact, though. All I know is that a bunch of ratings disappeared.

When ignoring the drop on the 9th, CNN's ratings stand at 25,153 for the period. The most of the bunch.

Here's the thing about trends - Take a look at the overnight growth in the downloads column and also in the ratings column. As downloads grew so did ratings, which means that CNN is asking for ratings and it's that relationship that'ss helping the algorithm understand it's popular.

Moving down, in third place we have NewsBreak, a news aggregator I analyzed in season 2 of App Teardowns. Right off the bat, I see a few issues here. There's duplication + it seems to hit the same bug CNN isn't. It's not impacting the keyword though, so it's not too relevant here.

NewsBreak isn't displaying a trend as you'd expect after seeing CNN, which is strange. I tried to explain that in last week's episode of This Week in Apps. But here's the other thing about trends - NewsBreak's steady flow of ratings is much higher than CNN's. Omitting sweep day, the app received 23,070 new ratings in the period—The second-most so far.

Normally, higher steady-state beats a spike, but because in the case of CNN, this isn't a spike but rather a trend, and a massive one, the algorithm helps it up.

Moving right on down, we have Google News in #4. I'm always surprised at how little effort Google is putting into its ASO, and you can see it here. Duplication, not that many ratings, and overall not a great rank for a name that's more recognizable than most of the rest.

And last for our batch is Fox News, which shows a similar trend to CNN's, except that Fox's died off a lot faster, turning it into more of a spike. With very few ratings (351 ignoring the sweep) and a negative trend, the algorithm can't do much but to push it down. And that's happening even though it's not duplicating when apps above it do.

Bonus: I normally end at 5, but the 6th result was interesting and worth looking at, so in #6 we have AP News. Something about this app feels wrong. It's probably a combination of the very short name and lack of subtitle. I suspect the keyword list is nonexistent as well.

Sweep-less, AP news received 4,144 new ratings in the period, which means more than the last two results. Short, focused name and lots of ratings should mean a good rank. So what's going on here?

I needed to take a closer look so I loaded all of these in the Competitors Keywords report, which puts all of their keywords side-by-side. There are a few ways to use such a view, but in this case I was after something simple. I wanted to see if it's ranked in as many keywords as the rest.

That, to me, indicates there's no keyword list. And, I know you can't save in App Store Connect with an empty keyword list, so I think... and I could be wrong here, but the only keyword in the list is news.

What this does is devalue the only keyword this app exposes to the algorithm. And that's why it didn't make the top 5.

Ratings are important, and while you'll mostly be competing with apps that have a fairly steady stream of new ratings, sometimes you'll have to go up against ones with big trends. Those are going to be tough to beat.

Or, flip that and be the app that's got the upwards trend.

By the way, I summed up the ratings for every app and game across all countries, in the the App Store and Google Play. Here are the numbers.

App Store Optimization is part art and part science. I say it a lot, and I mean it. The art part is what I've been talking about in this Keyword Teardown and in my App Teardowns.

The science part is where our ASO tools come into play. They're intuitive and easy to get started with.