Keyword placement and ratings are the winning combo for ASO. That's something that's becoming clearer to see by the day on the App Store, and it's not just some keywords.

Google Maps is currently sitting at the top of the App Store in the US which prompted me to look at the keyword where you'll find it most often. If you think ASO isn't important for an app so well-known you'd be surprised at how much Google invests in A/B testing.

But that's just one app. Let's see how other mapping apps gain visibility in the App Store with ASO. 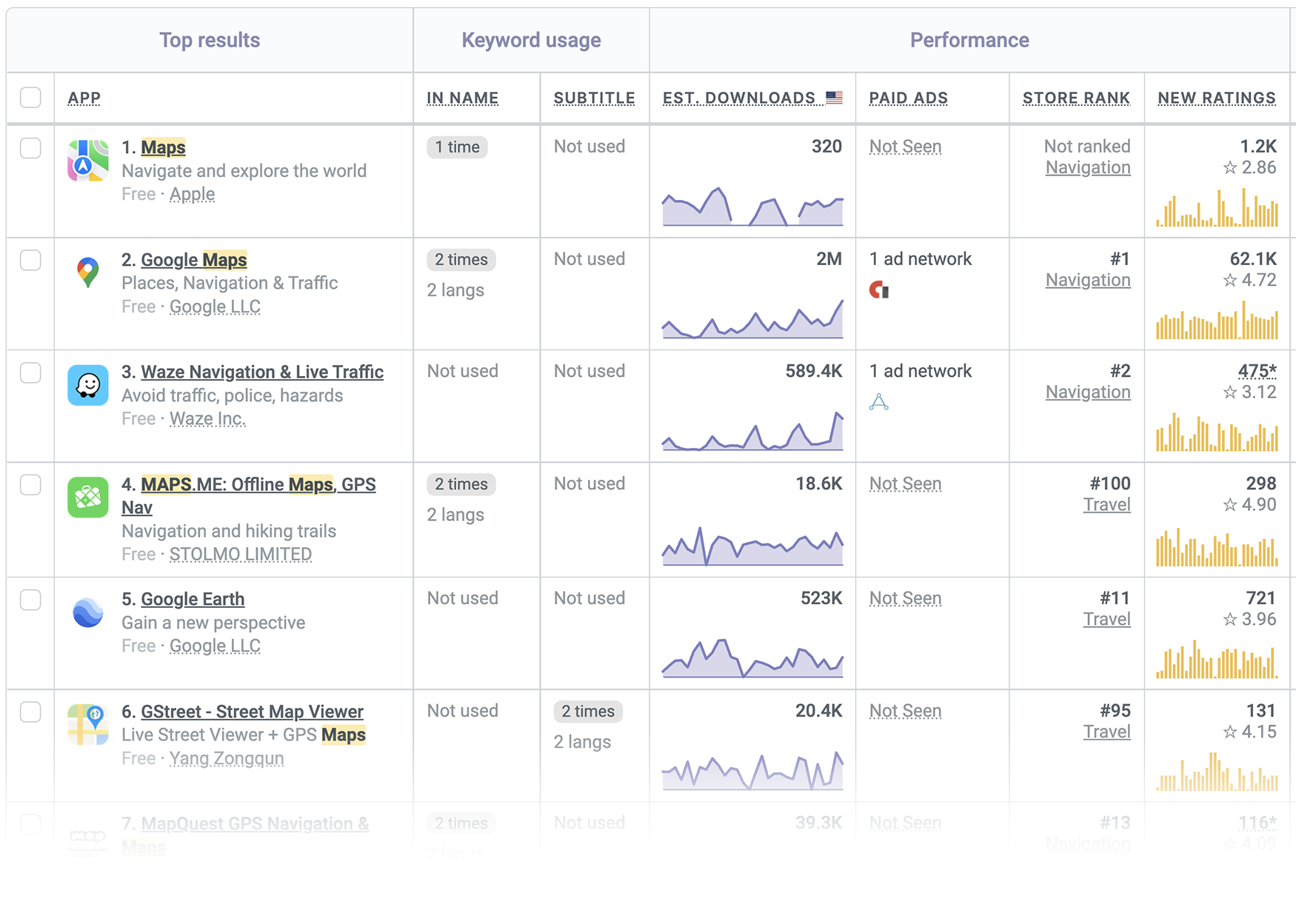 Apple's own Maps app is the top result even though it's not optimized and doesn't have the ratings. It doesn't need them, so I'm going to skip this one and go down to 6 results instead.

In real first place we have Google Maps. You may think that it's those downloads or its wild popularity, but it's simpler than that. Google maps has an optimized name, which puts the focus on the one keyword that matters, and the most ratings in the category.

Below it is its new(ish) relative Waze. You'll notice Waze doesn't display the keyword anywhere in its visible metadata which means... It's in the keyword list. I suspect Waze has a fairly focused keyword list, probably by design, which includes this keyword very early on.

Looks at the stark difference in new ratings between the two. Waze gets about 30% of the downloads but not even 1% of the ratings.

We've seen the importance of the keyword list in a few Keyword Teardowns already, so if you haven't optimized yours, now's a great time. We have a free tool to help you with that, which you can find here.

MAMPS.ME, in #4 (but really, third) gets lucky and ranks even though it repeats the keyword in the name because there isn't much else going on in the name and it has enough ratings to join this party. At a bit under 300 ratings though, this isn't a party and more of a get together.

Even in a keyword as popular the competition isn't as smart...

Right below it is Google Earth, another app that isn't showing the keyword in its visible metadata. And again, run by its keyword list, which I suspect is also pretty short. If you compare ratings, you'll see Google Earth gets double the ratings as the result above it, but because the keyword is in a weaker spot -- the keyword list and not name or subtitle -- it's not getting much support from the algorithm.

And last one in our set is GStreet, which uses the keyword in its keyword list, and at the end of it, of all places, and does more than I expected with of 131 new ratings.

If you're following along in Keyword Inspector you may scroll past 6 and see a bunch of other apps with the keyword somewhere in the name, subtitle, or both. Some of those even have more ratings, so... what's going on?

The reason #6 is where it is even though it isn't the most optimized has to do with the fact that its competitors are less optimized.

As you scroll below you'll notice duplication, apps with fewer ratings, and ones that I believe duplicate into the keyword list.

So your rank is dependent on how well you optimize, but also how well your competitors do.

One of the most important tools in your ASO arsenal doesn't include users or downloads or engagement, it's all about choosing the right keywords and using them correctly.

After you do, make sure you do the most you can to get your users to rate your app.

This is the core of ASO, and while you can do more, just doing this will give you serious results.

Oh, and don't try to understand why Apple's app are always at the top of the most appropriate keyword. That's a waste of your time...