#54 - Who You Compete with Isn't Always a Competitor

When you think "competitors", you normally think of apps that have the same features. Okay, maybe not the same, but similar enough that they'd cater to the same audience.

But when it comes to competition in the App Store Optimization sense, that's not exactly the case, and it's important to keep that in mind because it can change which keywords you may want to target.

To show you an example of what I mean, I picked an area of the App Store I looked at in episode 90 of This Week in Apps, where I showed the surprising amount of revenue generated by scanner apps.

The thing is, the algorithm can't really differentiate between a PDF scanner, where the money's at, a barcode scanner, or a police radio scanner. So if you have a scanner app, those "other" scanners are standing in your way. 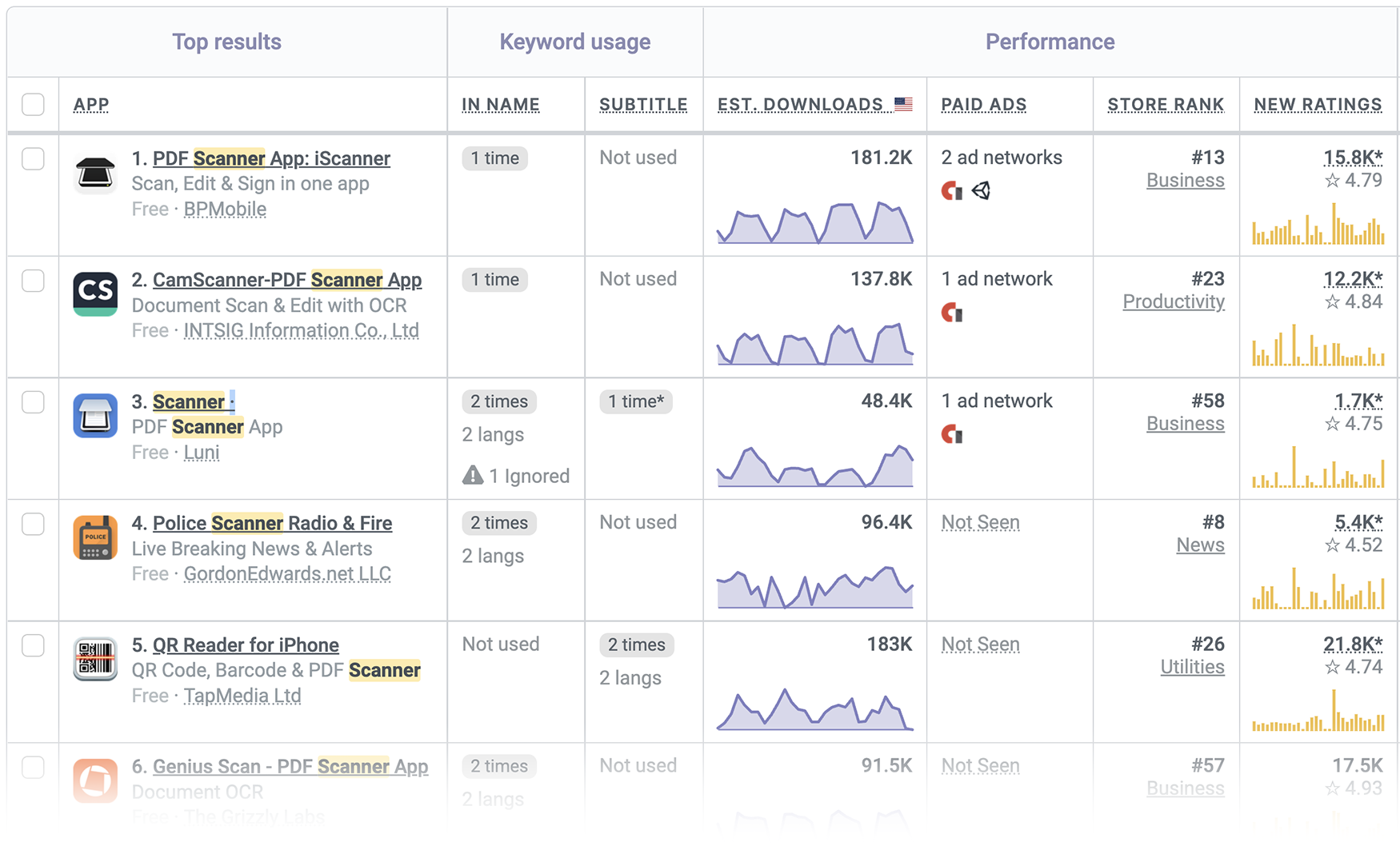 iScanner, the first result but not the one with the most new ratings, does a great job with its keywords. The keyword is in the name and also very early into it. There's also no duplication between the name and subtitle, and the ratings-to-downloads ratio is fairly high at 9%. I've seen higher, but that's not bad.

These, together, lift it to the top.

Right behind it we have CamScanner, which checks all the boxes as well. It's getting fewer new ratings, which is why it's the second result, but converts downloads to ratings at roughly the same 9% rate.

Moving down, we have a scanner app with fewer new ratings. By an order of magnitude! See the app's name? It's super focused using a hack I described in Keyword Teardown #34. Yes, it's also duplicated (facepalm Luni), but because there's not much else going on there, it's still pretty powerful.

Although it's getting more new ratings, its keywords are much less focused than Luni's scanner, and I suspect being in the News category isn't helping much, either.

Moving on down we have a barcode scanner in 5th place. It's worth noting that this is a feature of every iPhone, but also that this scanner is getting the most new ratings, and at 12%, converting more downloads than any app in this set into ratings!

But... it only uses the keyword in the subtitle and at the end of it, which makes it pretty weak, and hence nothing more than 5th place. I'm not sure the category has much to do with the rank, so moving "scanner" into the name should float it to the top fairly easily.

Looking down the rest of the results, we can see they're mainly PDF scanners, which means #4 and #5 are standing in the way of a PDF scanner that could rise to glory.

This is a simple example, but when optimizing, it's important to keep this in mind while evaluating keywords.