Last week I noticed one of the most famous apps in the App Store updated its metadata for the first time in a loooooon time, and it looks like they've added some keywords in there!

The app is Zoom, the app that connected pretty much everyone during the early pandemic but like every good thing, downloads eventually dropped. I covered Zoom over on This Week in Apps a whole bunch of times in the last couple of years.

Unfortunately, my excitement for Zoom trying ASO was met with the standard enterprise approach. The kind that makes it hard to win, so I analyzed the main keyword Zoom is targeting.

FYI - Zoom ranks #55 for this keyword right now because of its approach.

The future of business is more virtual. The pandemic made that quite clear, and there are a few competitors that want to be the go-to solution for that. The leader, Zoom, wasn't doing any real ASO until recently, so it's nowhere to be seen. Who is? 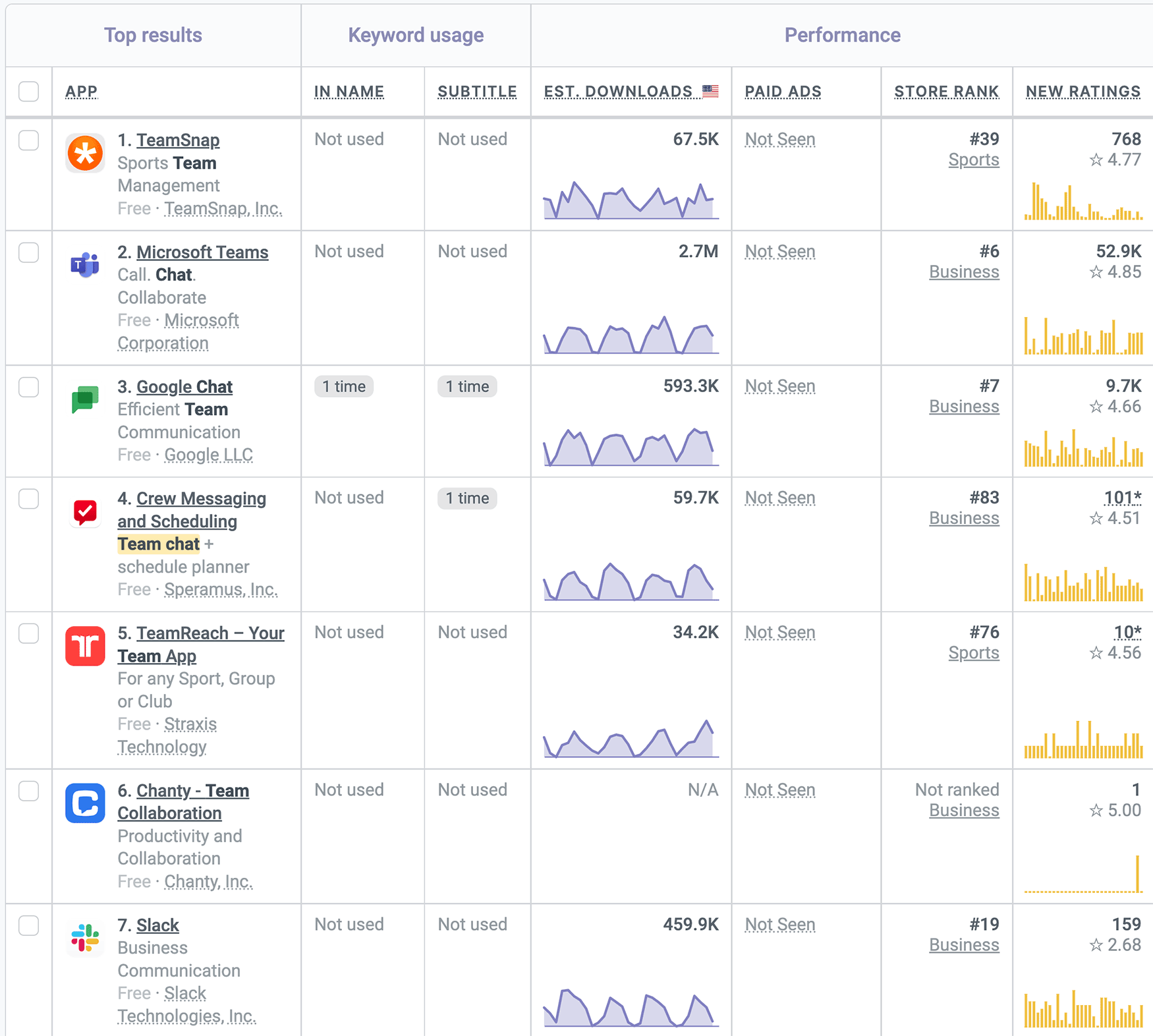 The top result for this keyword is very surprising! TeamSnap isn't exactly a Zoom competitor but is when it comes to ASO. It's important to keep that in mind - a competitor is anyone who ranks for a keyword you're targeting. Regardless of their features.

TeamSnap doesn't use the full keyword in the visible metadata and doesn't get the most new ratings or even has the highest ratings coverage. What the ?!?!?!?

Hang on to that thought - I think I know what's going on here, but we need to look at the rest first and come back to this one at the end. The gist - it's an algo quirk I covered a couple of times before + accidental hyper-focus.

Right below it is Microsoft Teams, which is the kind of app I'd expect to see here. Microsoft is doing a lot of things right here - no duplication, keeping this short and focused, and has a good ratings coverage.

It earns its #2 place by following the rules.

In third place we have Google Chat, an app I forgot existed even though I use Google Meet all the time... Google Chat is where it is because it isn't getting nearly as many ratings as Microsoft and while it uses the entire term in the visible metadata and keeps things short, uses the keywords in reverse which we know isn't good for ranks.

Fourth place Crew does things right. Kind of... It uses the full term in the subtitle, which is good when compared to the competition who isn't, but bad because it's the subtitle and not the name.

Crew gets a tiny fraction of the ratings of the rest though, so it really earns this spot by doing a good job with its keywords and not for its performance. ASO FTW!

And last, TeamReach, managed to make the top set with just 10 new ratings and half the search terms. Another What the ?!?!?!?! moment, but also the answer to the mystery of #1.

So, back to #1 - the short answer is the category.

It looks like the App Store expects a keyword that includes the word "team" to surface results from the Sports category, because teams + sports = win?

Business apps, which is what I'd associate with "team chat", are at an inherent disadvantage here. But! These algo signals aren't preventing apps in other categories from ranking, just making it harder for them to rank. That's why Microsoft, Google, and Crew need more new ratings + good keyword placement.

Both ar every important here.

I expanded the results chart to include the first 7 results because that's where Slack is, another tool I use a lot. Slack isn't a sport app, doesn't get many new ratings, and doesn't do its keyword placement correctly. Naturally, it can't crack the top 5.

Zoom is now targeting this keyword so we may see it rise, but it has three big obstacles:

All three issues are very common for enterprise apps. Why? Because whoever is doing ASO doesn't have the last say and the name is considered "branding" which is under the purview of an executive that doesn't understand ASO at all.

I've helped enough enterprises who ignored my suggestions only because a higher-up couldn't sign off on changing the name.

A total waste. Or, an opportunity for smaller apps that don't have to deal with red tape.

The third issue, with ratings, is another one I see too often with enterprise apps who refuse to ask for a rating or optimize the process. The opposite of this.

And one more fun fact before I wrap things up - Apple's FaceTime is also ranked for this keyword, claiming the 63rd place on this list with absolutely no reason to rank here at all.