Keywords with a high popularity score and results that don't look very competitive are called opportunities. Why? Because when you know the rules of ASO you could probably get an app ranked there pretty quickly and because they're popular, get downloads.

It helps if building an app to fit the keyword is easy.

Do those still exist? Absolutely! All you have to do is look. This one came up in my Twitter feed...

Getting passport photos right isn't hard but it's never fun because there are so many rules. There's a class of apps that helps with that by providing templates based on the rules of different countries.

If you're thinking, wait, that's just a camera app that crops automatically, you aren't too wrong. With a popularity score above 50, it's certainly an interesting opportunity. 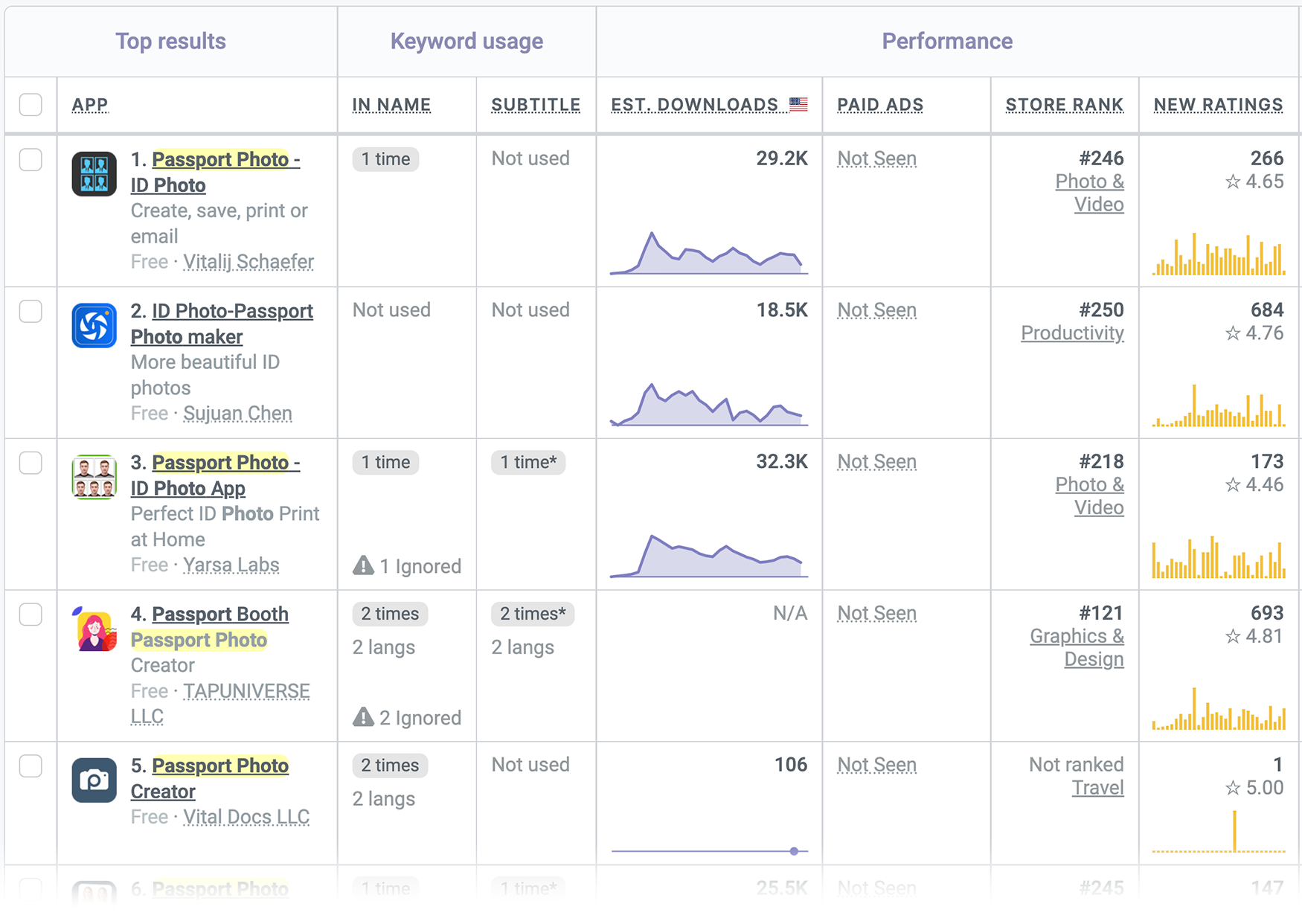 Before we get started - I noticed none of the top results had a real name and they're all just keywords, so I'm going to refer to them by their rank. I don't love this way of using the name, in case you were curious...

First place winner doesn't have the most new ratings and even duplicates the word photo in its name. Ouch.

FYI - Duplication within the name (only) is bad but not as bad as duplication between the name and subtitle.

Right below it, we have an app with more than twice as many new ratings and a little over half the downloads. That means it's doing a much better job converting downloads to ratings. But... it commits the ultimate sin of ASO by repeating the word photo between the name and the subtitle.

It also duplicates it in the name, which just like #1 isn't ideal, but is less bad than the subtitle.

Why? Because the algorithm handles duplication by only looking at the last instance of the duplicated word. Where that word is, determines how much weight it'll get.

Keywords in the name have more weight than the subtitle, so if you duplicate within the name you lose some weight but not as much as what you lose when duplicating into the subtitle.

Next! Third place finisher has ever more downloads than #1 and even fewer new ratings, but duplicates the keyword between the name and subtitle. Poor keyword placement and low ratings mean the algorithm can't do any better than third place.

Things are getting interesting in fourth place. The app with the most new rating, and what looks like a real name, Passport Booth, is splitting the keyword between the name and the subtitle.

Pretty much the complete opposite of the top results.

We already know that splitting keywords is bad, so even though it gets the most new ratings, it isn't able to leverage their power. What a shame. A teeny tiny keyword change can fix that and put Passport Booth in #1.

Waaaait! Yes, I'm pretty sure that's what's happening even though I now say to not leave the subtitle blank. That's because I think the algorithm handles apps that never added a subtitle differently than how it handles apps that had one and removed it, or apps released after subtitles became mandatory.

We went through a bunch of things in this short read, so instead of summarizing the teardown I turned it into memorable (and sharable, hint hint) statements: