The Algorithm is a Tiny Bit Smarter Than You Think

We already know a lot about how Apple's algorithm treats the words in app names and subtitles, but a question I get fairly often is, how good is it at filling in the blanks and making up words?

And the answer is, it's complicated.

It can figure out some things and can't others.

Here's an example of something it can figure out to help you when you choose keywords.

There are a bunch of reasons to need a second phone number, and at least half of those are legit. I think. What I know is that it's a popular and competitive keyword that earns a lot of money!

And like most other popular keywords, this one's got some obvious errors, a little trick, and five apps to analyze so let's get right into it. 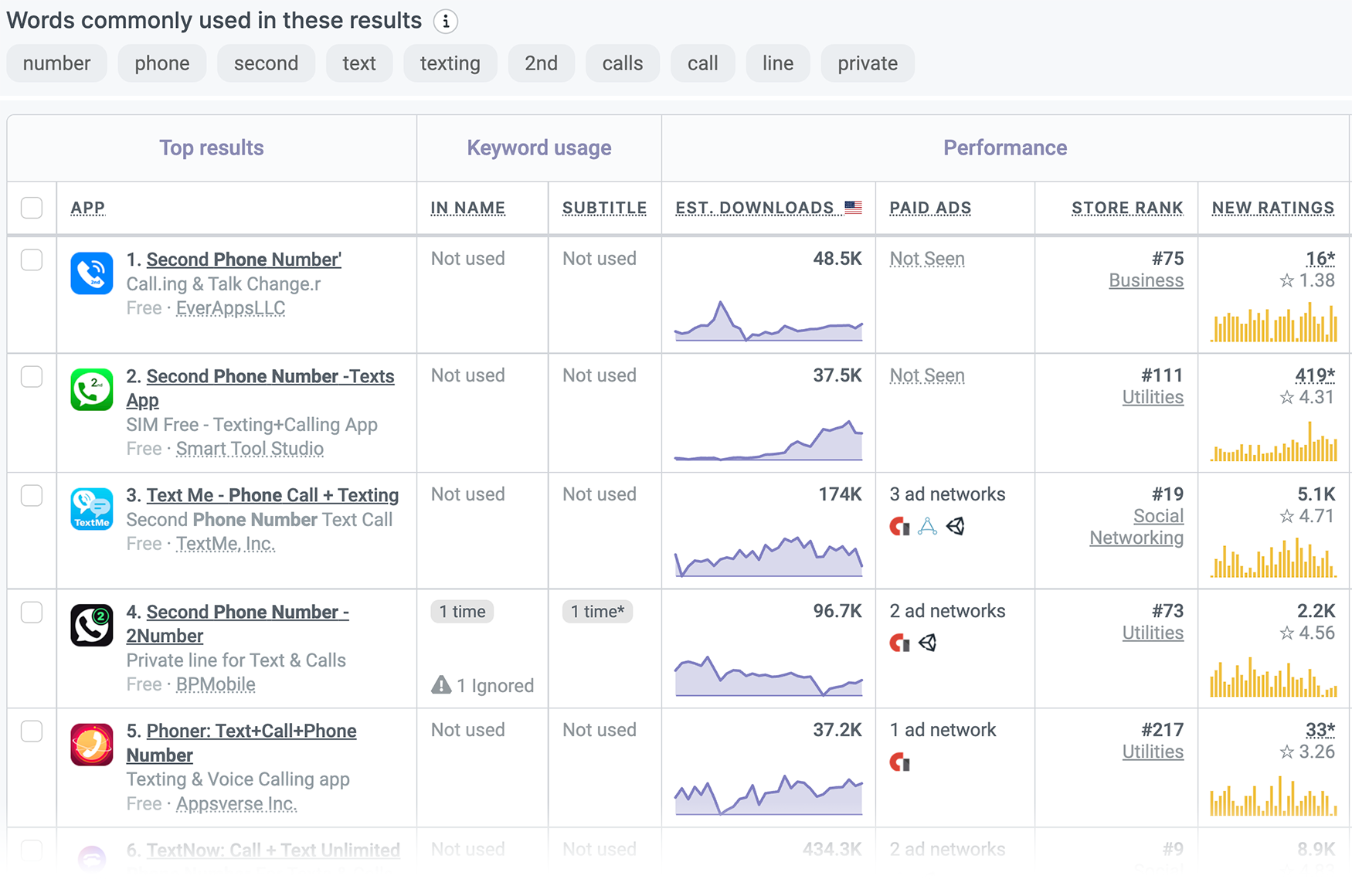 In first place we have a no-brand app that uses the special character trick we saw in #34. That + using only the keyword in the name lands it the top spot even though it's got the fewest ratings.

Why? Because no other competitor does that. Remember, App Store Optimization is contextual, meaning you need to beat the other results the algorithm is finding.

But, wait! The app's name and the keyword aren't the same, right? Well...

I've seen enough to be sure the algorithm treats "2nd" and "second" the same way. I suspect this isn't going to work in all localizations but we know that it at least works in English.

While it means your app will show up for both it doesn't mean it'll have the most strength, so if I had searched for "second" instead I'd find different results.

The way I'd leverage this tip when selecting keywords is to include the version that's more popular, unless I can't compete, and then I'd aim for the lower popularity one, where I should be more competitive.

Moving down to second place we see Texts App, which uses the full keyword right up front, and earns its top spot even though it gets only a few new ratings in comparison to the app in third. That happens because the app in third commits the cardinal sin of ASO...

Text Me, in third, gets the most ratings of the top 5, and by far. But it duplicates a part of the keyword from the name into the subtitle, and has the keyword only in the subtitle which really hurts it.

Those two, together, lead the app with the most new ratings to sit tight in third place. The fix here is soooo easy!

In fourth place we have what seems like a mistake until you think about it. 2Number isn't duplicating keywords or including important ones only in the subtitle, yet, with more new ratings than the #1 and #2 results, is still ranking low.

Why is that? I suspect it's the keyword list. Remember, the keyword list combines with the name and subtitle for the purpose of indexing, so having a repeat there, even though it's hidden, is a really good way to tell the algorithm which keywords you don't want to rank in.

A small mistake with a simple fix that can have massive results within a few days.

And last on this list is Phoner which does very little right. It doesn't have the full keyword in its name (just keyword list), has the brand up front, and gets very few ratings.

There's absolutely no reason for the algorithm to rank it any higher, which is why it is where it is.

If you're the dev behind any of the apps I'd love to know what you've done around ASO and if possible, help.