"But how do I actually do ASO?" is a question I hear pretty often. It comes from big companies, indie devs, and even established studios with apps that are already successful. Recently, it's been coming from devs who are trying to ride a wave.

The answer is pretty much the same across the board:

Step 3 is where all the "magic" happens, and also the topic of this Keyword Teardown. True to the teardown series, this won't be a guide that walks you through how to choose keywords or optimize for them, but rather a real-world example of a search, its results, and why they are the way they are.

If you do want guides:

AI avatars were all the rage last month, a trend that started with one app but raised many apps with it. While looking at a few related keywords I found one that some developers haven't realized is popular and the results are... educational.

FYI - I started my research by looking at "AI avatar" which I thought was the most popular keyword for this topic. It wasn't. 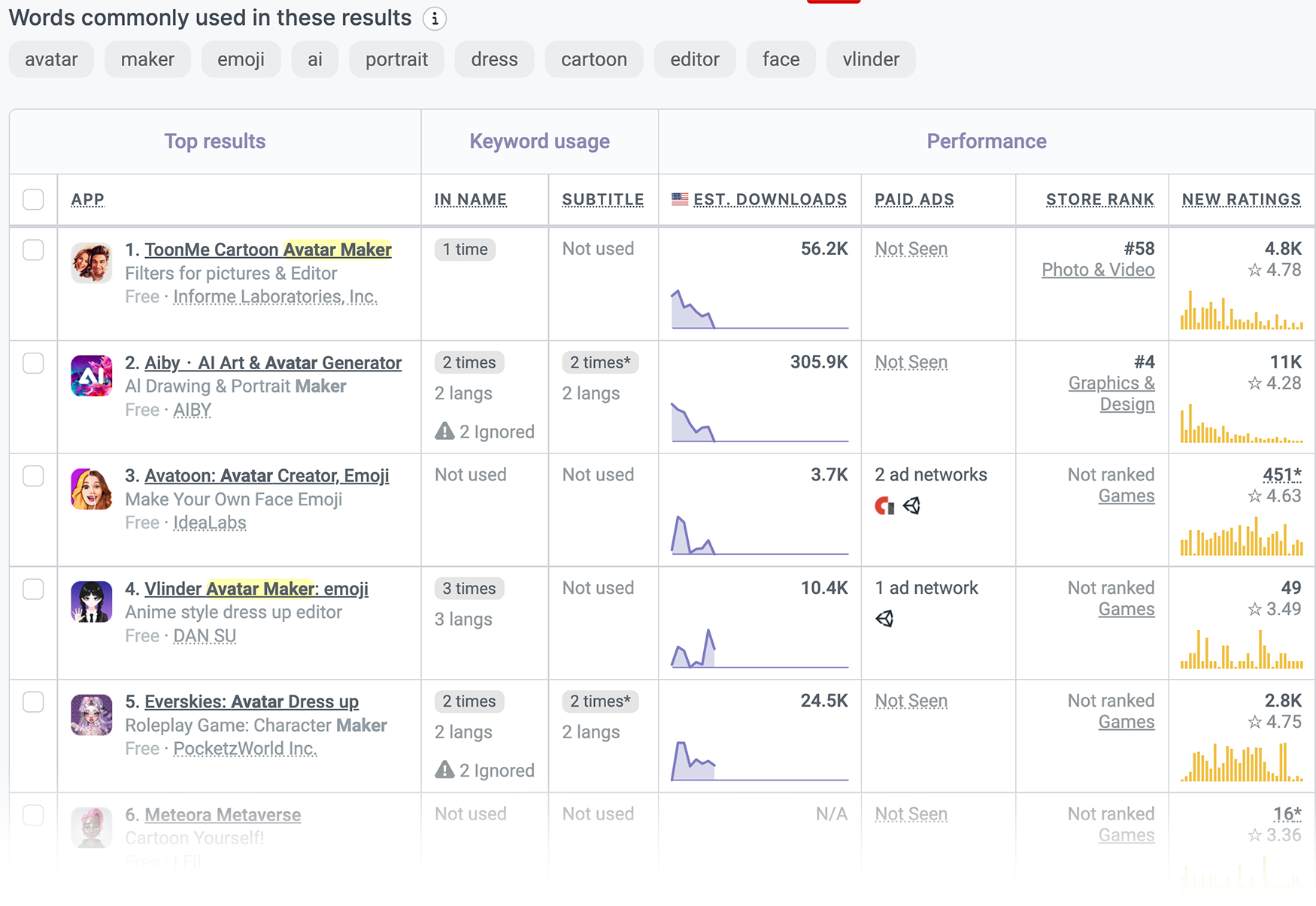 In first place we have ToonMe, not one of the popular names you'd expect to see if you've been following the trend (or read the insight I linked to earlier in this teardown).

ToonMe earns the top spot by having the keyword in its name, not committing the sin of duplication, and having a decent amount of new ratings. As you'll see in a few sentences, ToonMe doesn't have the most new ratings.

Right below it is Aiby, which gets more than twice as many new ratings, the currency of ASO. Its problem is that the _first thing the algorithm cares about is keywords and not ratings, which is what Aiby lacks.

Lacks isn't the right word because Aiby does use the necessary keywords, just not correctly.

Astute readers will notice that while Aiby does have the keyword "avatar" in it's name, the second part of this search keyword, "maker" comes at the end of the subtitle.

When you split your keyword between the name and subtitle, the algorithm will still see both, but will assign them both the value it would assigned as if both were in the subtitle, which is much lower than the name.

That's why the algorithm ranks ToonMe above Aiby.

This is a simple mistake I see (too) many developers and marketers make, and that really hurts their chances.

Fix: Important keywords should always go into the name. The full keyword and preferably with both words being consecutive.

Moving on to #3, Avatoon, which needs to read that last point again because it's doing it wrong. Avatoon has one part of the keyword in its name and the other in its keyword list, the one that isn't visible on the App Store (just to the algorithm).

That prevents Avatoon from getting any higher.

Before I call this a mistake, there's something we must consider. It's possible the creators of Avatoon read my guide on keyword selection, considered every relevant keyword combination, and decided "avatar maker" wasn't as good as the combinations the app's current name targets, which looks to be "avatar creator".

"Avatar creator" has a lower popularity score and only a slightly lower competitiveness score than "avatar maker". In absolute terms, it's the difference between a 32 and a 59.

The only reason it isn't lower in the ranks is that other apps are +ess relevant, as far as the algorithm is concerned.

Moving down to fourth place we have an interesting one. Vlinder uses the full keyword in its name and doesn't duplicate it. Hurray!

Well... Remember how I said new ratings are the currency of ASO? Vlinder doesn't have too much of that currency, so the algorithm plays the most charitable way it can't and drags it up to 4th place but not higher.

Tip: You can get ahead without having more ratings as long as you're within range, and range usually means the same order of magnitude, and generally in the hundreds and not tens. Vlinder received under 50 new ratings in the last 30 days in the US, which doesn't really help it.

If you aren't optimizing your ratings flow you're leaving money on the table. I'm going to roll out a new metric to Keyword Inspector to help understand how optimized any app is at getting ratings. More on that soon.

And for the last one we have yet another interesting case. Everskies gets quite a few new ratings. Not as many as the first or second place, but more than the third and fourth combined (and multiplied by 6!), but like others above it, it's splitting the keyword between the name and subtitle.

Not only that, it's hitting a little-known bug in Apple's algorithm that's making the last word not get indexed correctly.

Tip: When using anything that isn't a letter, characters like -, :, etc. make sure to keep your name or subtitle shorter than 30 characters by the number of non-letters you use.

Fix: Shorten the subtitle, or better yet, bring "maker" into the name. It's really that simple.

And that's the end of the top 5, the ones that most users will see when searching for this keyword.

Did that all make sense?

That's all I have for you this week. I hope you've learned something new you can use to get more downloads for your app!

For more articles like this one make sure to subscribe to the newsletter, where I publish a new Keyword Teardown every week.

If you have any ASO or app marketing questions or comments, you can find me on Twitter.